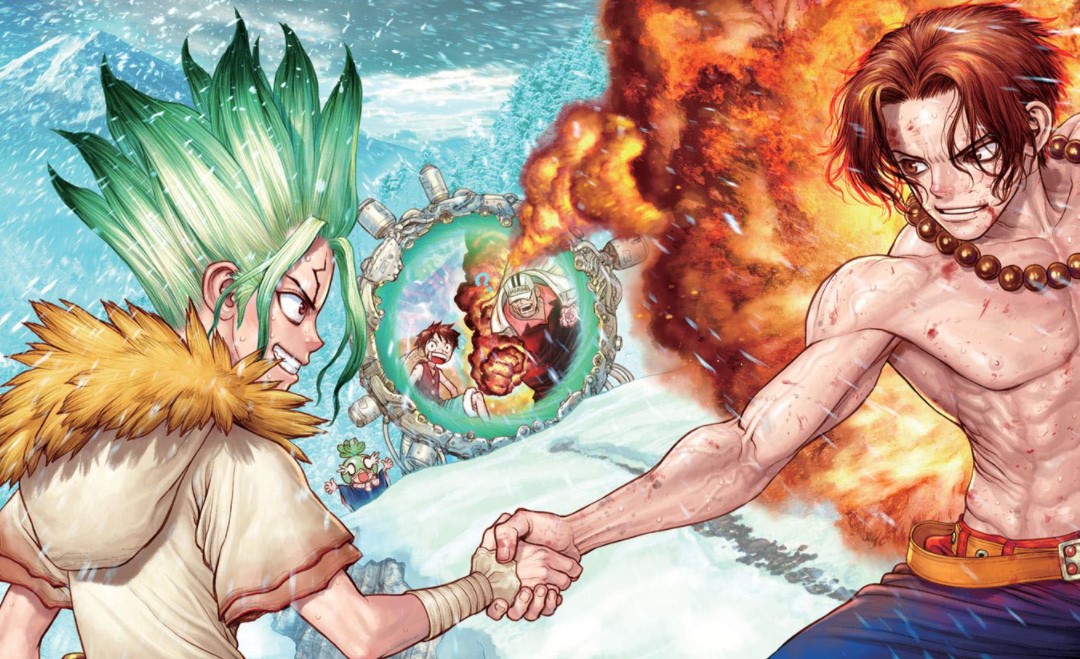 The scientist crew has reached the amazon forest, collecting equipment that they will need for their experiments. While busy collecting the Petrification Device, Taiju comments that if he turns into a stone again, someone must quickly revive him with the revival fluid. Taiju is diving inside the Medusa, and Senku is counting how many seconds he would last. Senku comments that Medusas in this big pile is all outta Juice.

Kohaku and Suika think it is fun looking at Taiju diving in and out, and they think they can help. Ryusui comments that it is no matter how much time has passed, but the one on the island dies after zapping the entire island. It also won’t be surprised that the ones that covered the entire earth would be dead too. Dr. Xeno is glad that he sees a grand sight. Thousand years ago, when the light struck the earth, the earth becomes coated with stone.

Chapter 182 will be released on Sunday, 24 January 2020, officially on VIZ. We will keep you updated as soon as they are released. A new chapter of Dr. Stone will be released every Sunday unless the weekly schedule shifts to Friday release. This manga is not taking a break next week. Check how the crew reached the Amazon Forest in the following link: Dr. Stone Chapter 181. Take a look at the recent development below.

Gen comments that it was a vast quantity of advanced weapons. Gen approaches Xeno asking him to show his hands ad what did he put inside his pockets. Chrome falls for that, and he tries to search Xeno if it is true that he is hiding something. Gen said that he was just teasing him and started to sing, but Chrome tries to take Xeno’s hands out of his pockets. Senku said that they must leave Xeno in whatever he is doing.

He comments that Xeno knowledge can be useful for their research. Because their only chance of defeating Stanley and his crew involves the Medusa. Suika thinks that they are so many and they will become useless and Tsukasa comment that the quantity will give the new option. He asks Senku if he is telling the truth and Senku said yes. Tsukasa started to smash the Petrification Device, and Ryusi praises him for that.

Ryusui comments that they still have mountains of them that need to be cracked. Senku tells everyone that it is time to get top work. Inside the ship, Ginro and Mitsukaze are wondering where Stanley is taking the ship. Mitsukaze replies that he does not know. But he hopes Senku’s band has already evaded their captors. While Maya asked Stanley if he thinks the junior science brigade is just sitting and relaxing. 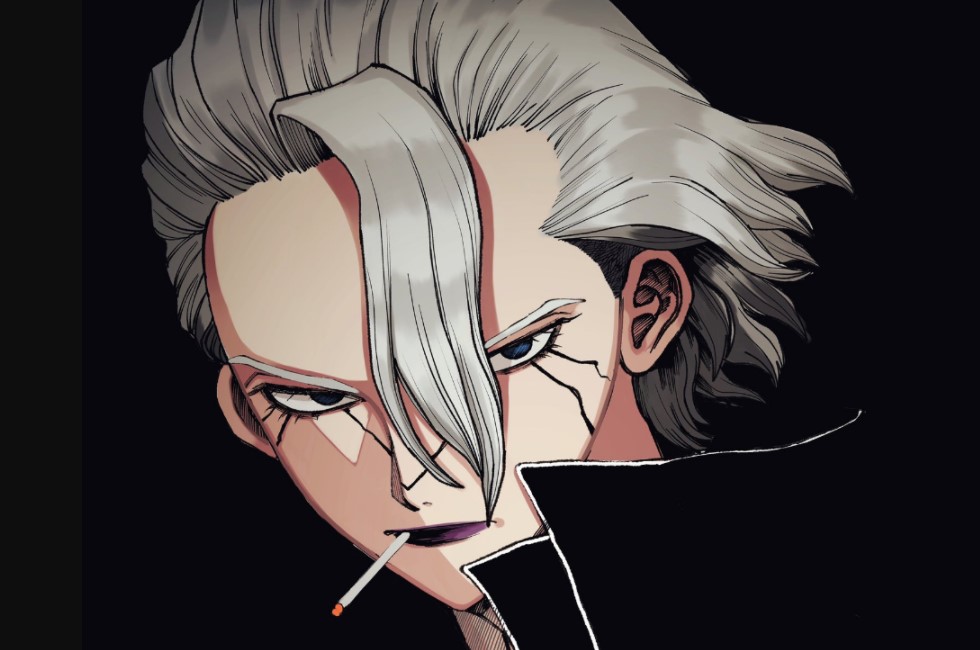 Stanley replies that he does not think that those kids are sharp, and Stanley’s henchmen reveal about their bike trails. He checked his radar and said that they have escaped down the amazon river, and he guarantees that. After some time, he realizes that Senku’s crew has created a ship. But even if they take a long way, they are bound to catch them, and Homura asks how they will recognize the ship. 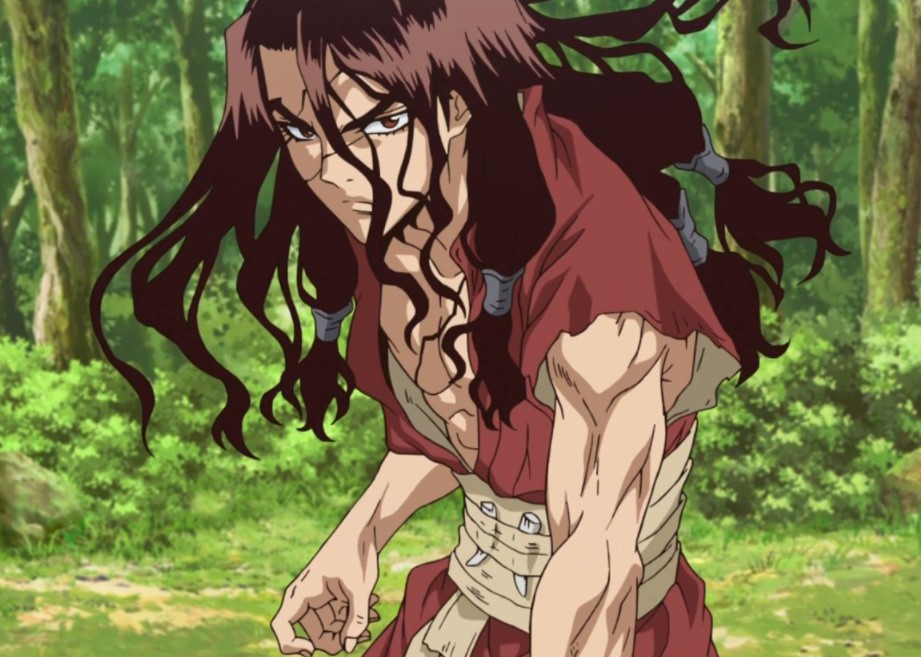 The henchman said that their radar could detect anything out of the ordinary. They can not hide from the radar and from the eye of science. Ginro is sweating, watching everything by the window while Senku and the crew are busy working. Kaseki is building a new boat with the help of the crew, and Gen asks what’s with the Bizarre shape Chrome comments that it looks cool, and Saseki said he is wondering the same thing.

Everyone comments on the new boat’s looks, and Senku, along with Ukyo, are working on how it should look like. They are avoiding every possibility for it to be detected by anything. Senku is glad that when Stanley catches up with them. They can use a stealth vessel to beat the netcast of their radar. Francoise realizes that others do not understand what Senku meant. Francoise, reveals that it will be a ship that is no visible to radio waves.

Gen comments that it means their science has highly improved. Ukyo said it is a science that is used in more day warfare, and Gen asks why a person needs to hide from radar. Senku explains why and they continue working. After some time, a stealth ship is acquired, and they started to test it. Chrome finds that the devices are not detected by radar. Xeno comments that something must be absorbing the radio waves.

Chrome suggests that they can stick the devices all over their new boat. Senku and others did that, and the crew started to sail down the river at full speed. Ryusui comments that they will be diving into the realm of futuristic science. This will be a new world science and Xeno said science is exquisite.

Dr. Stone Manga is officially available on VIZ Media and Shueisha’s Manga plus official platforms. Raw scans for new chapters are released 2-3 days before their respective chapters are published. We advise you to read the digital copies from their official websites and apps to support the Manga creators and publishers.