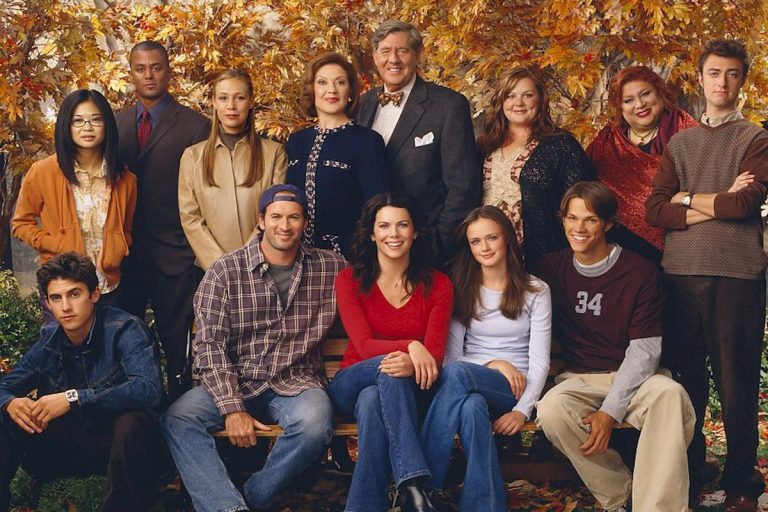 Think of the perfect comfort food, what comes to your mind? Chicken dumplings. Now think of a show to go with that comfort you. You’ll obviously think of Gilmore Girls. The perfect show for any situation-quarantine, regular weekends, random binge-watch. Gilmore Girls is the daughter of a mother Lorelai and her daughter Lorelai, who the show calls Rory. The mother is played by Lauren Graham and gets pregnant at sixteen. She has Rory, played by Alexis Bledel, a headstrong, smart, obedient child, very different from what her mother was at her age.

Sixteen years later, Rory has just been accepted a prestigious school, Chilton and Lorelai run, and inn. Since Lorelai cannot afford the fee, she knocks at her estranged parents’ door to borrow some money. In return, all Lorelai’s mother asks for is a weekly dinner at her place. As soon as the show aired on October 5, 2000, on The WB, it instantly became a flagship series for the network. The show is also known to focus on class divide more than anything. Like Rory’s interaction with her mother’s parents is a stark reminder of class differences. More themes of the show include Lorelai’s difficult relationship with her high society parents, Emily and Richard.

Rory goes through different things and experiences at the elite, private high school Chilton. Her dream is to attend Harvard but she goes to Yale University. The woman, Sherman-Palladino, who was the showrunner for the mainly whole of the series, filled the show Gilmore Girls with fast-paced dialogue (it was so quick, you had to catch your breath!) The show is also filled with pop culture references. Rory broke out of character in season 4 and that was it for the audiences. Most people who had seen her grow up were so disappointed in her. After season six, Gilmore Girls moved to its new network. The original creator  Sherman-Palladino left Gilmore Girls and was replaced by David S. Rosenthal for the final season. Gilmore Girls was produced and distributed by Warner Bros. Television and filmed on the studio’s lot in Burbank, California.

The star cast of Gilmore Girls included Lauren Graham as Lorelai Gilmore who is an Independent, 30-something single mom who runs a local inn with a deep love for pop-culture and coffee. Her daughter, the other Gilmore is played by Alexis Bledel as Rory Gilmore. She is a precocious and driven only-daughter of Lorelai, almost 16 at the start of the show. Scott Patterson plays Luke Danes who is basically a kind-hearted diner owner; Lorelai’s friend and lover. The mother-daughter duo visit his place every morning, noon and night.

Kelly Bishop plays Emily Gilmore who is the matriarch of the Gilmore family. She is a high society housewife. Her husband is Edward Herrmann as Richard Gilmore. He is an intellectual patriarch of the Gilmore family. He works in the insurance sector and he is always working. Melissa McCarthy plays Sookie St. James. She is Lorelai’s best friend and acts as her chef/co-owner at the inn. Keiko Agena plays Lane Kim who is Rory’s best friend. She lives a secret life and becomes a rocker. Kim’s mother is crazy religious and she can go any extent to protect her daughter. Together they own a furniture shop.

If you are looking for more Gilmore Girls themed shows, this list is so meant for you. Keep reading!

Gilmore Girls: A Year In The Life 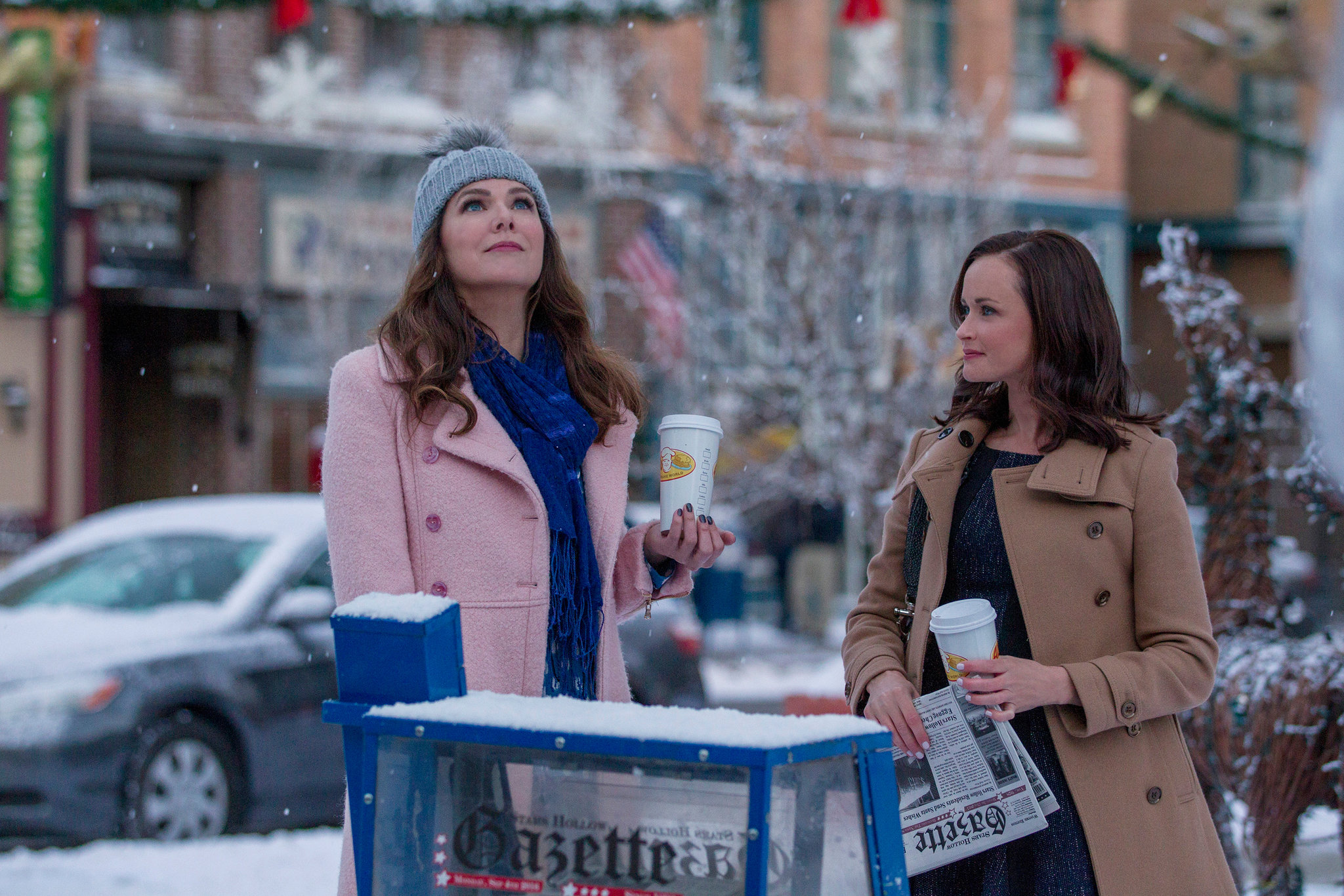 What better way to watch a similar show than to tune in to ‘Gilmore Girls: A Year In The Life’? It is a continuation of Gilmore Girls from where it left off previously. Rory returns to Stars Hollow to visit her mother at Christmas. She’s broke, she hasn’t been able to achieve what she hoped she would, Lorelai has moved-in with Luke and they seem to be thinking of starting a family.

Unfortunately Lorelai’s father Richard has passed away, and Emily Gilmore has decided to move away. Gilmore Girls: A Year In The Life starts with winter and ends with fall. It is created by Amy Sherman-Palladino. The rest of the cast reprise their roles just as they did before. 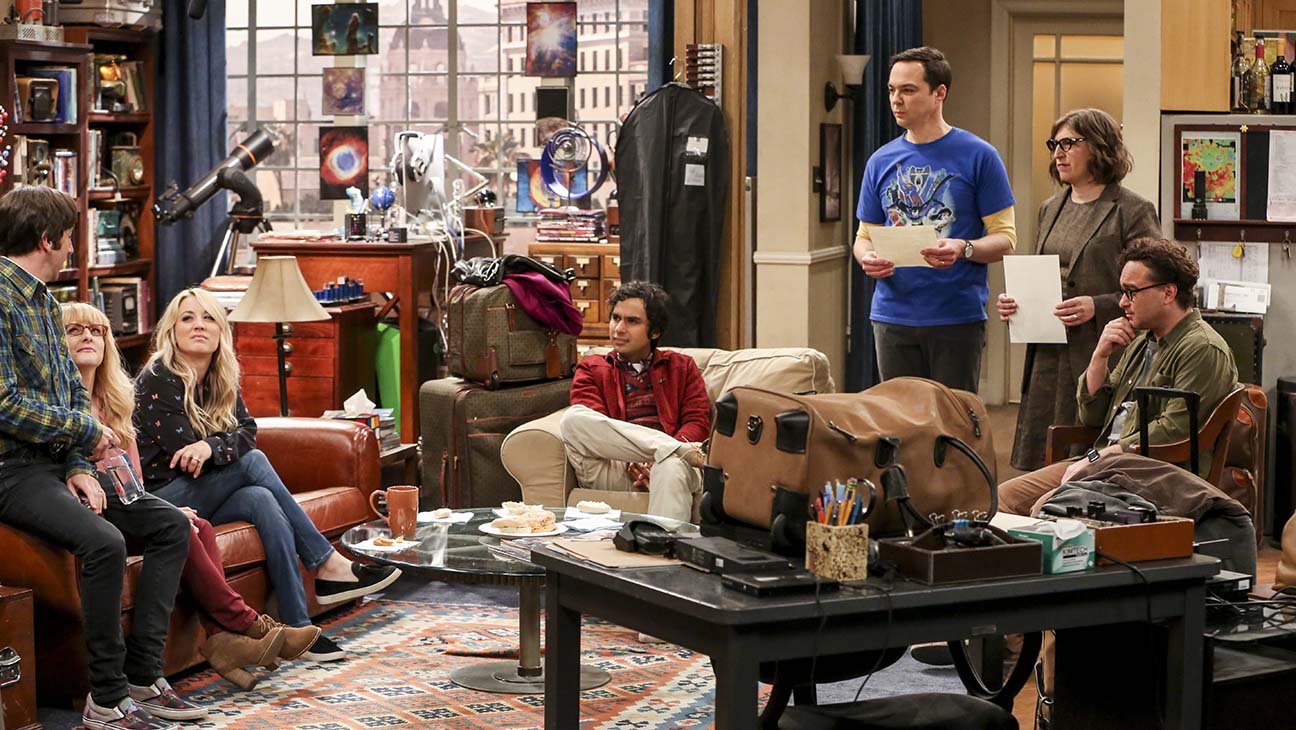 The Big Bang Theory or TBBT is the story of four nerds, two of which meet an across-the-hall neighbor. Their life changes instantly, as this girl, Penny enters their lives. Soon Bernadette and Amy enter the scene and the nerd-dom grows.

If Gilmore Girls keeps you hooked to literature and all the great books that you must read, TBBT introduces you to the world of gaming, comics, DC, and Star Wars. 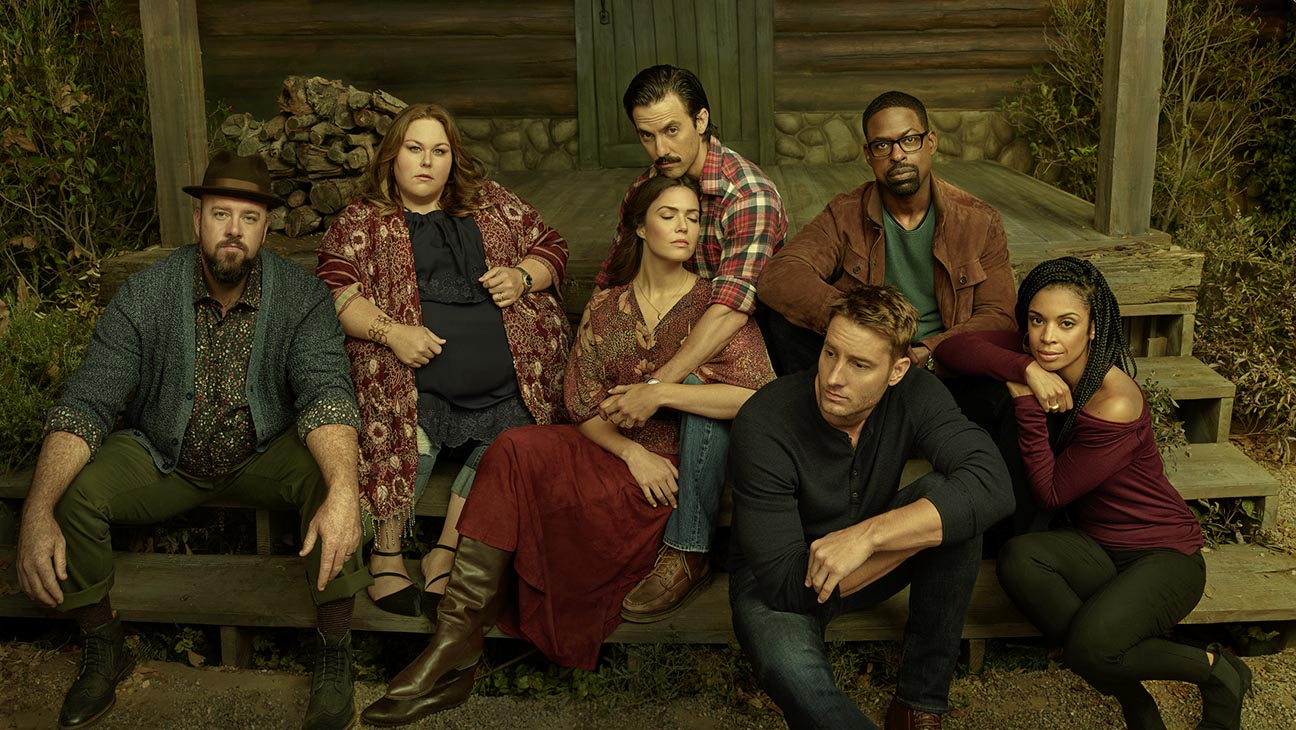 This Is Us is strongly recommended since it stars one of the castmates from Gilmore Girls, Milo Ventimiglia. That’s right, Luke’s very own nephew who dated Rory on the show. This Is Us is also the perfect replacement for Gilmore Girls since it is based on family, too. The story deals with three siblings Kevin, Kate, and Randall, each of whom goes through ups and downs of life. The show is funny, the characters are lovable and the writing is witty! And there’s Mandy Moore in the show! 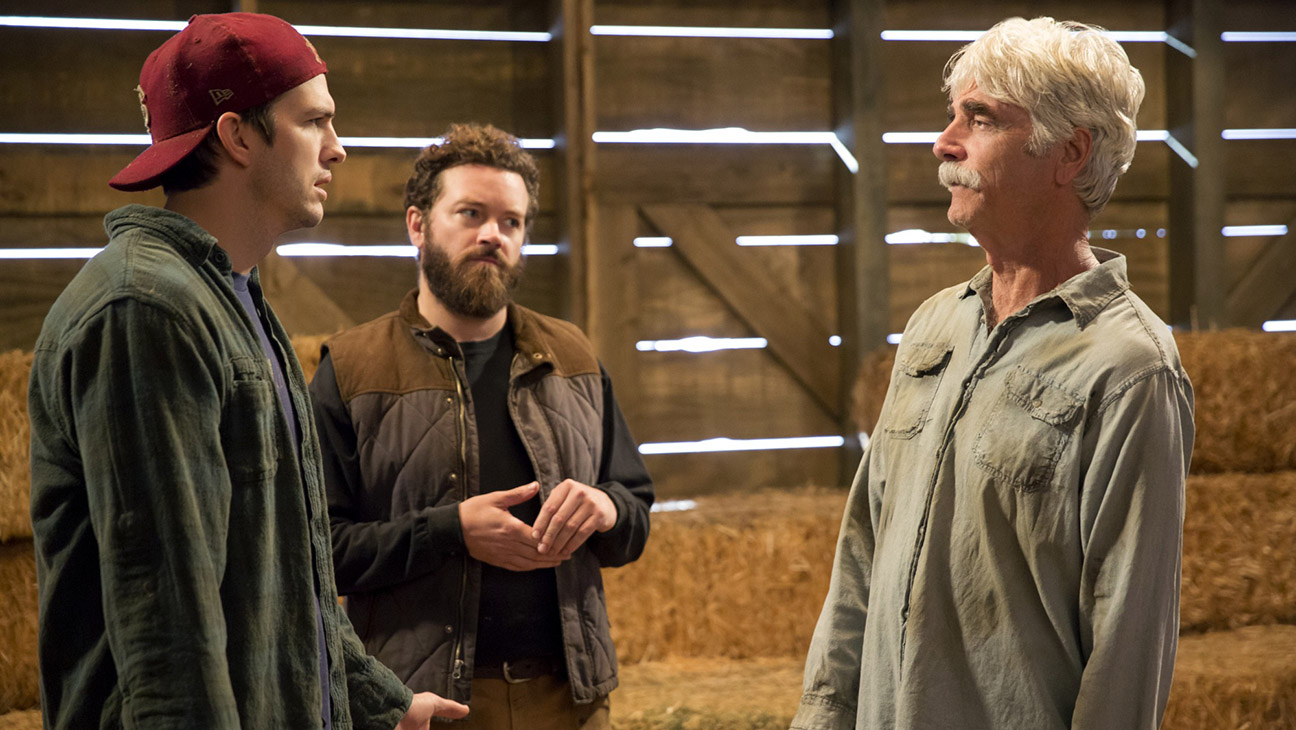 Netflix’s The Ranch is such a great show for fans of Gilmore Girls, chiefly because there is just so much family drama in this one as well. Also because The Ranch is set in a teeny-tiny cozy town in Colorado. Ashton Kutcher plays the lead character Colt. After his brief-spanned career as a footballer, Kutcher returns to his family home to run a business with his father, Beau (Sam Elliott). Throw in his brother, James, a high-school sweetheart and a current girlfriend in the mix and you have the story of The Ranch.

Packed to the Rafters 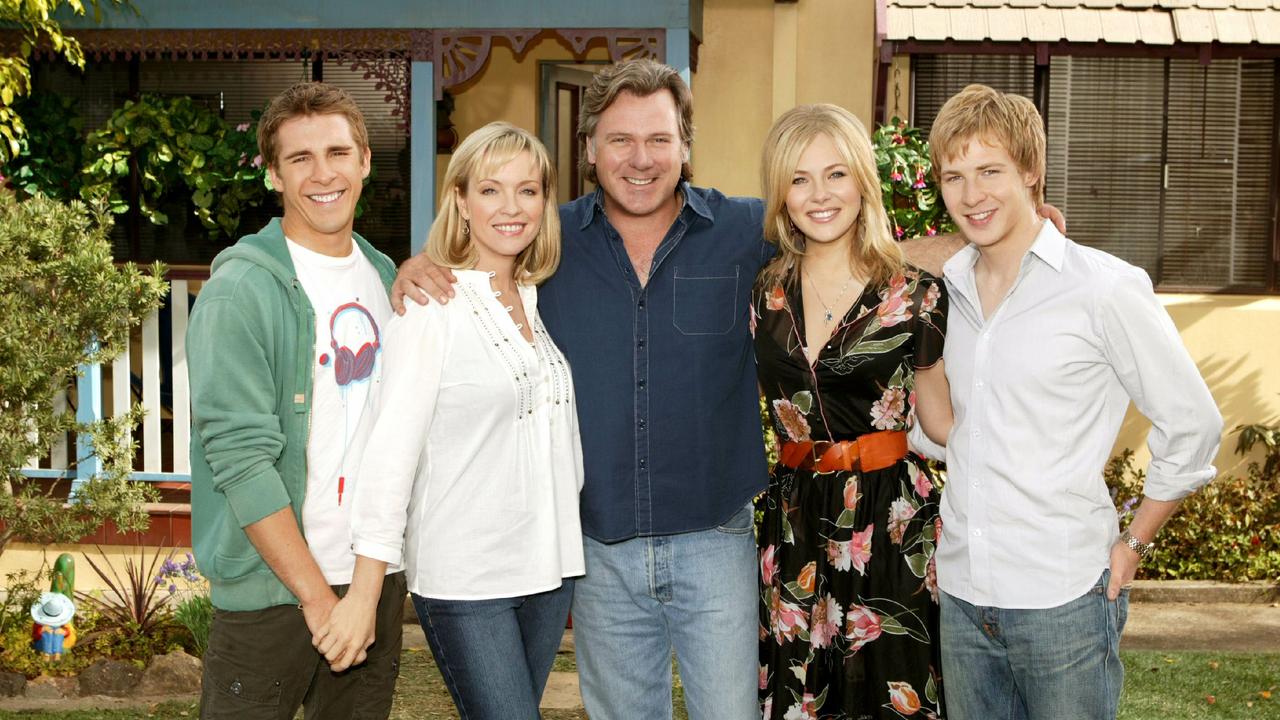 This one is slightly different, in that it is an Australian drama! As long as we stick to the theme of family and maintain diversity in this list, I think we are good to go! Packed to the Rafters is a show thoroughly based on the theme of family. The couple, Dave and Julie are married for 25 years. They decide to be alone for a while when their three kids, Rachel and Nathan & Sammy return home, in the wake of unforeseeable circumstances. Not only does the show touch on social issues but on comedy and drama as well.

Two and A Half Men 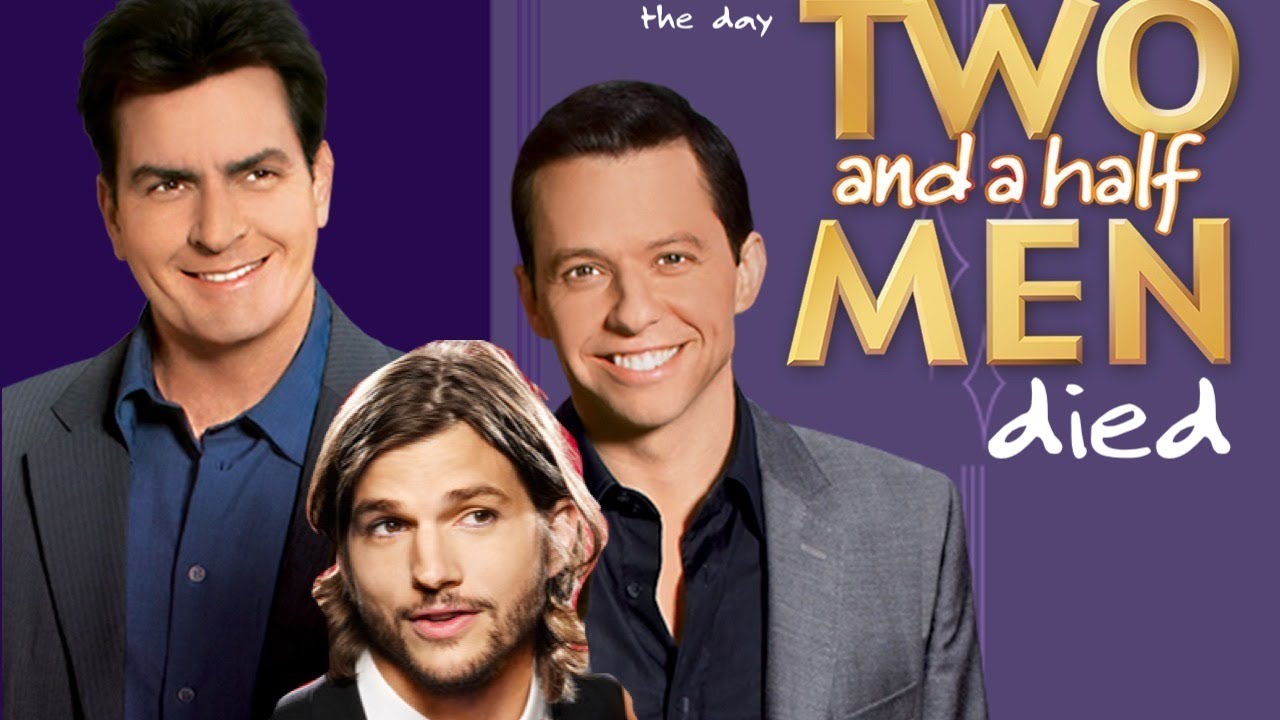 Ashton Kutcher fan, eh? You’ll find Two and A Half Men interesting towards the end then– the departure of Charlie Sheen. But don’t worry, that’s way off! Charlie Sheen stays till season 8 and from there on, Ashton takes the lead as a Walden Schmidt, a goofy internet billionaire.

The initial story begins when hedonistic Charlie Harper’s divorced brother and son move in with him. Alan and his son, Jake are only supposed to be there for a day. That turns into weeks, months, and years and the two never seem to leave. Did we mention Charlie lives in a beach house in Malibu? The show is created by Chuck Lorre of TBBT fame. 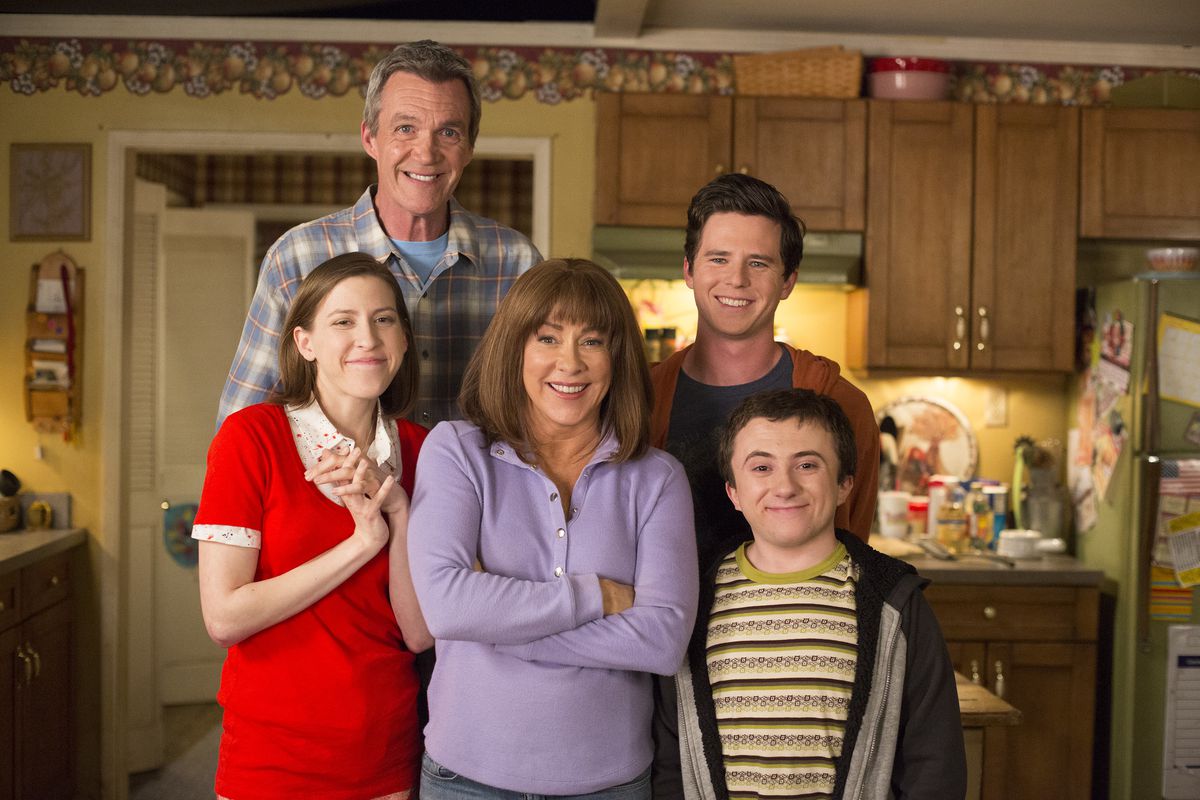 When we first started to watch The Middle, we thought Sue Heck was Amy Farrah Fowler from TBBT! The Middle is the family comedy-drama based around Frances and her family. She heads a family, she shares a wonderful relationship with her husband. The family lives in a town called Orson, in Indiana. They are far from any perfect family, but at the end of the day what counts most is that they learn an important life lesson and stay with one another, no matter the odds. 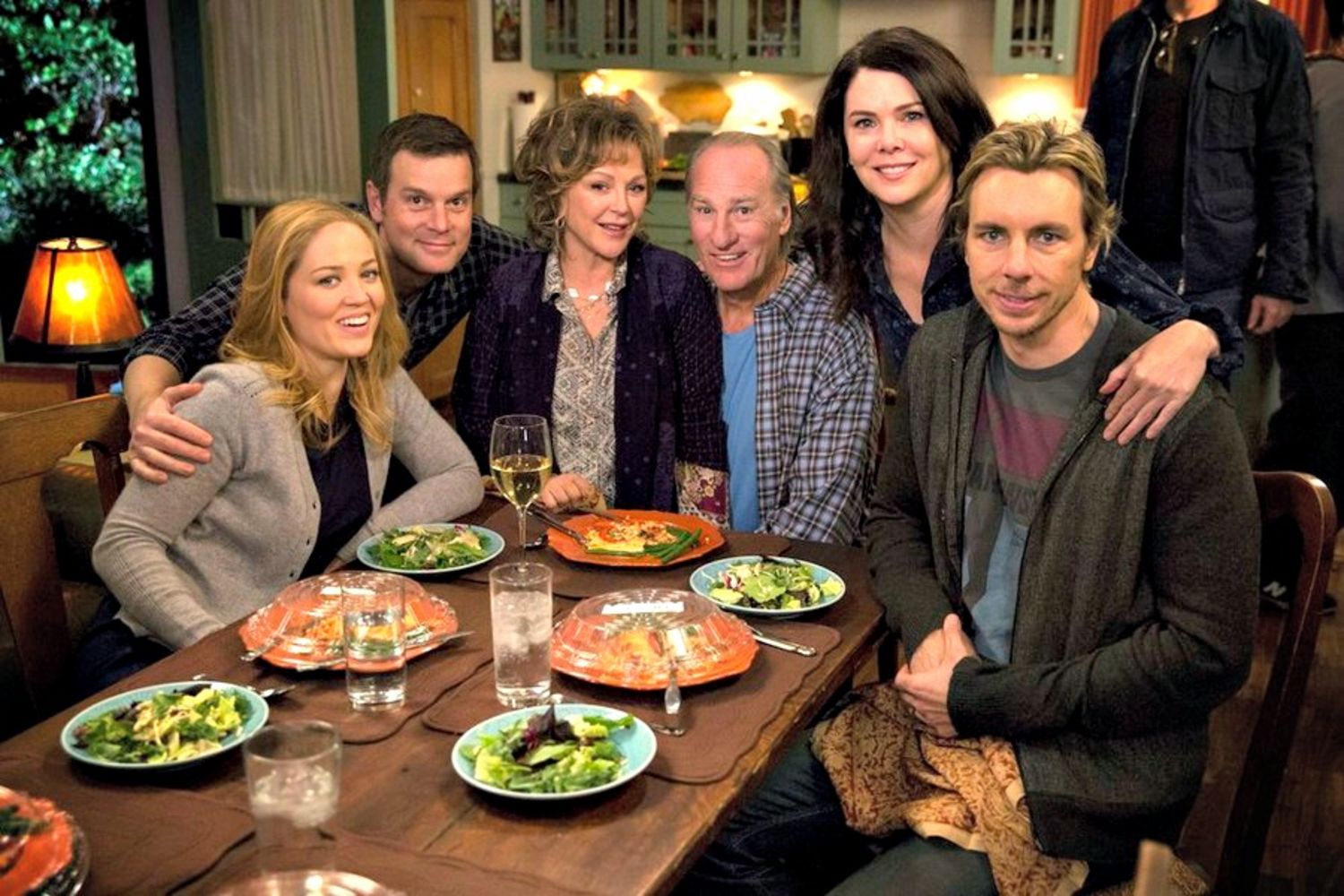 Are you a fan of Lauren Graham (Lorelai)? If yes, then you will find her here on Parenthood. Just as Gilmore Girls focusses on family ties, Parenthood follows the lead. It is the kind of show where family ties aren’t just stretched to three generations but are multi-generational. In California, live the

Braverman family, who live in, struggle with the challenges of marriage, raising their children, and supporting each other through tough times. 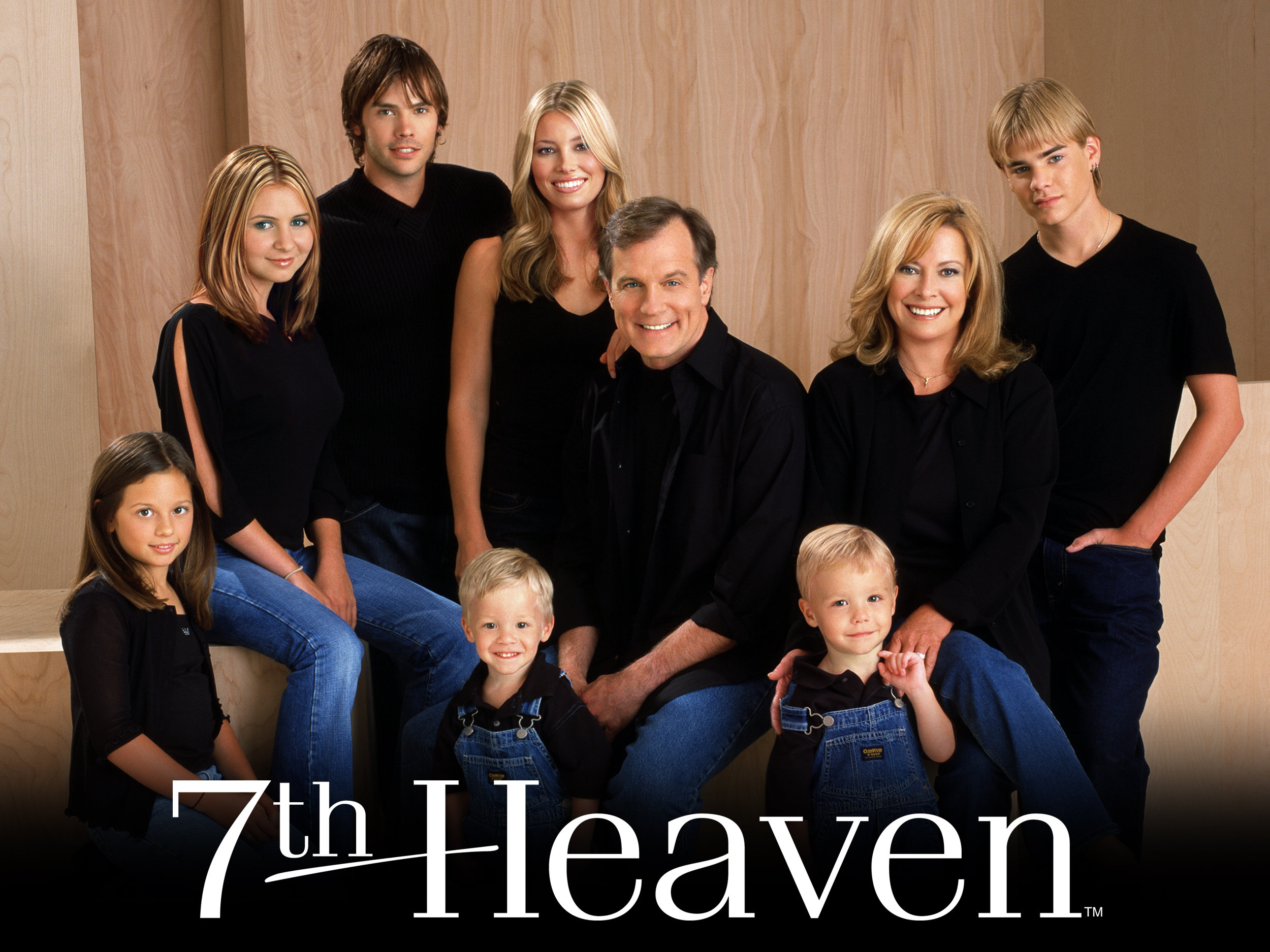 Another show to cozy up to is 7th Heaven. It is all about the family. People who have watched the show will remember Eric and Annie Camden and their seven children – Matt, Mary, Lucy, Simon, Ruthie, and twins Sam and David! Much like the Gilmore Girls, it reflects the importance of family, more so than raising your children right. You will also find Matt Czuchry Gilmore Girls’ Logan! in the show.

The premise of Camden’s family is the Minister-father and a stay-at-home mother, who have seven children, from toddlers to adults, all with families of their own. 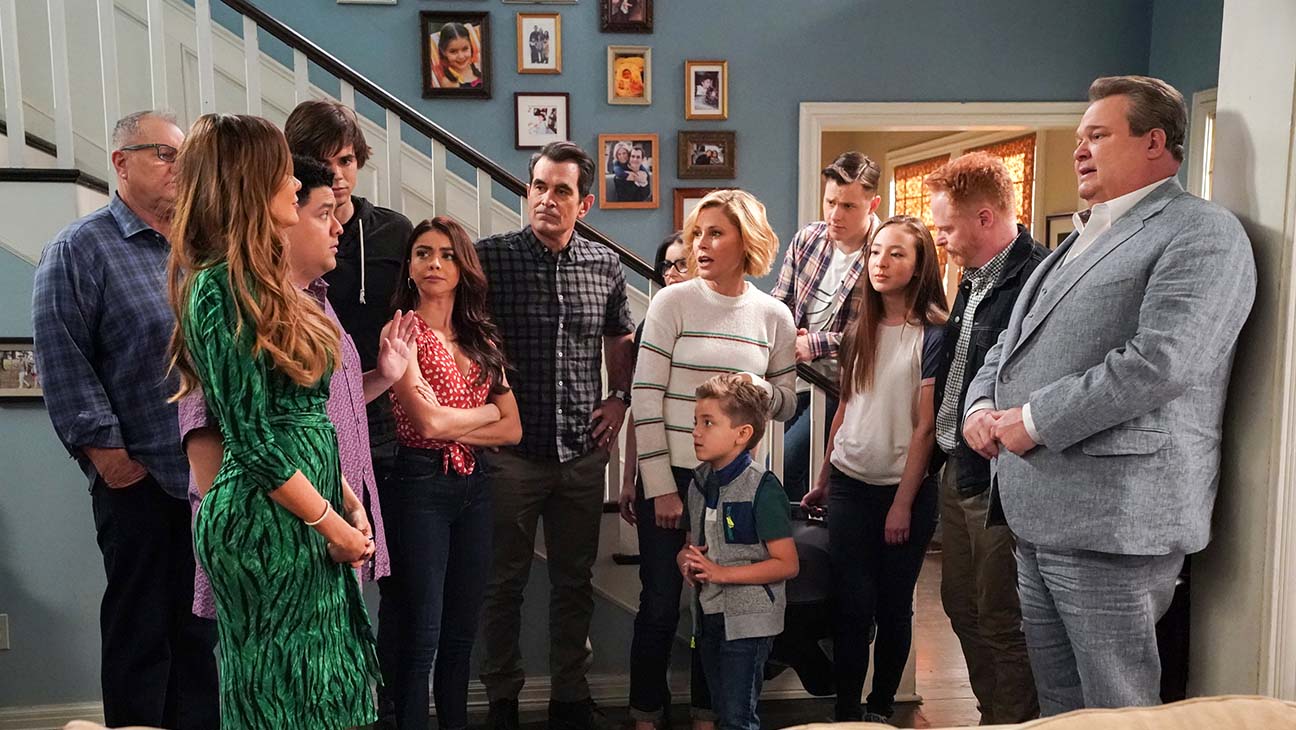 The show literally has a ‘family’ in the name. So it should be no surprise that it is based on and around the family. Modern Family is a tale of quintessential American families centered around work, relationships, and kids. There are three families essentially on the show, who live in California. And boy, are they a handful. They deal with their spouses, kids, and work in comical ways.

Modern Family ended its run and crushed a lot of people in the process. Nevertheless, it was one of the greatest shows to air on TV.