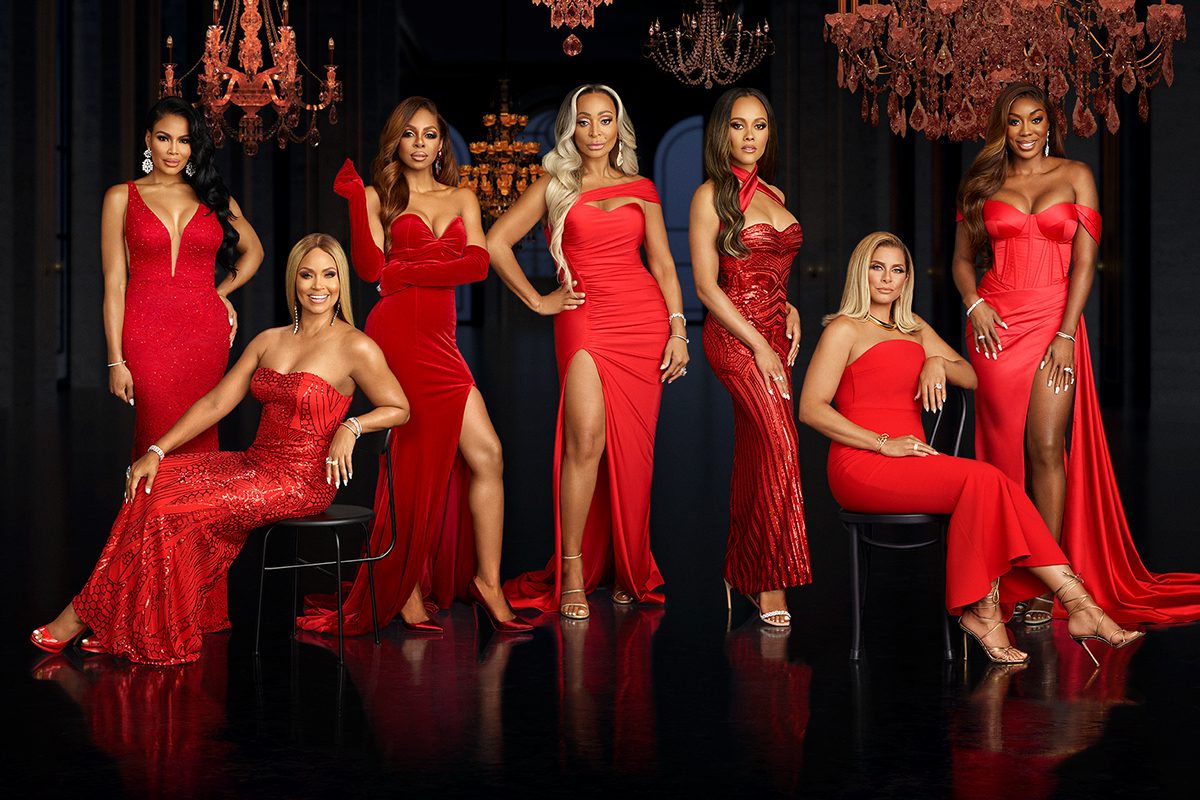 Potomac, Maryland is a small town of fenced mansions and verdant hills named after the Potomac river near Washington DC, which is adjacent to the community that has facilitated a further expansion of the “Real Housewives” franchise in the United States with The Real Housewives of Potomac returning for its seventh run.
Consistent with its other editions, The Real Housewives of Potomac revolves around a coterie of privileged women who make up an exclusive society, including some big names such as Gizelle Bryant, a single mother of three and philanthropist who provides aid to inhabitants of impoverished cities by raising money; Ashley Darby, a former winner of Miss District of Columbia Pageant and stepmother to a 24-year-old and a 21-year-old after she got married aged 22; and the former spouse of ex NBA player Juan Dixon, Robyn Dixon.
The housewives are back with fresh drama, new dynamics, tons of shade, and piping hot tea as Robyn Dixon, Gizelle Bryant, Ashley Darby, Karen Huger, Dr. Wendy Osefo, Candiace Dillard Bassett, and Mia Thornton return for Season 7 of the series. Former housewife from Seasons 1 and 2 of RHOP, Charrisse Jackson-Jordan will join them as a friend of the cast, alongside a new face and friend, Jacqueline Blake.
Furthermore, there is a supposed cast trip in true Real Housewives fashion that will bring some questions and tensions which threaten to alter the course of the ladies’ friendships and personal life. As if that is not enough in itself, there is also a cameo from Peter Thomas The Real Housewives of Atlanta. 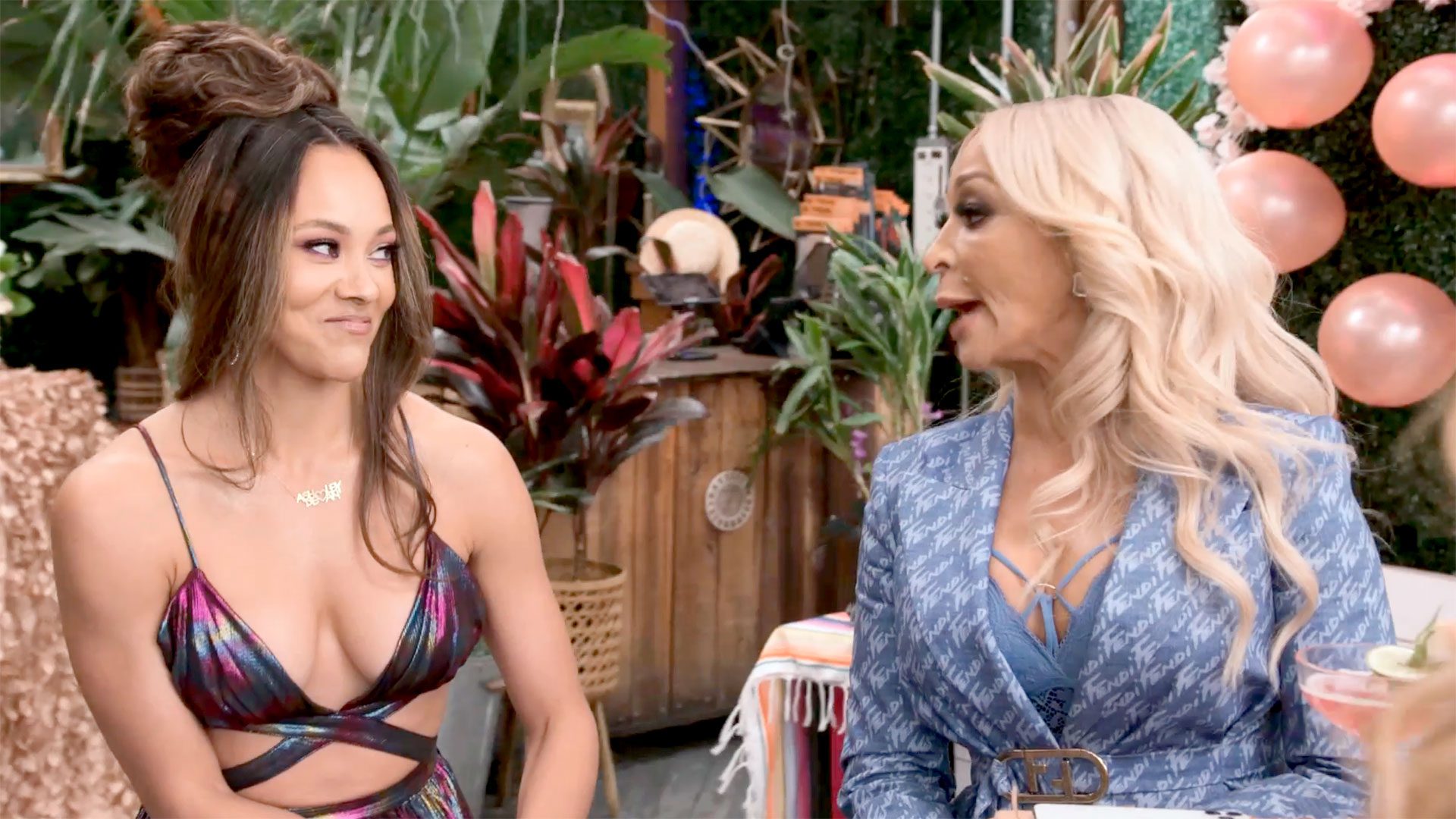 Ashley Darby, who had recently separated from her husband Michael, wishes to focus mostly on being a good mother alongside some occasional TikTok to pass the time. Moreover, the real housewife is on a house hunt to find a new home for her boys and herself. However, enlisting Michael’s help makes her doubt if she needs to be completely rid of him.

With her eldest child, Grace, getting her driver’s license and ready for an adventure on the road and her twins  Angel and Adore turning 16 to leave the west wing sooner than later, Gizelle Bryant is approaching the single-parent stage of her life. It’s bittersweet to see her back in the market and rekindling a romance with an old flame from her past. However, Gizelle ends up being involved in drama with a fellow housewife’s husband.

Everyone is expecting a wedding very soon, with Juan and Robyn Dixon finally engaged. But that list seems to exclude the Dixons who have gotten themselves absorbed in the art of procrastination. Robyn has got her priorities straight, and a prenup sits higher on the list than getting married because she now happens to be the primary breadwinner in her family.

Karen Huger is feeling as good as she now looks after getting some “tweaks.” But her husband Ray is worried that such efforts at vanity could have undesirable effects on their daughter Rayvin. He cannot help but question the motives behind such a refresh.

Dr. Wendy Osefo seems to have a lot on her plate as she carries on her job as a political analyst on national cable news, as a teacher, and also as a businesswoman running her candle company. On top of that, she wants to open a lounge inspired by a Nigerian theme. Eddie is worried that she is working herself dry and needs to take care of her health and her family.

Mia Thornton hints on social media that she might have cancer and then adds that she needs further diagnosis to determine if she really does. This leaves the ladies doubtful if it is true at all or just an attention-hogging trick.

Candiace Dillard-Bassett finds herself more occupied than ever with her music career taking off, but if she wants to have children in the future, she has to take action, and so Candiace decides that freezing her eggs is the right first step in the journey which is not without its hurdles. Meanwhile, Chris, who has found a new job that is taking away much of his time, finds himself in an unwanted position when an allegation from some of the ladies is thrown his way.

Former housewife Charrisse Jackson Jordan is back as a friend of the ladies and acts as the voice of reason that most of the ladies are happy to receive, with the exception of Karen, who seems to be taking special pains to ignore her.

Jacqueline Blake also joins as a friend. She is especially close to Mia to the extent that some might think they are sisters, but some queer behavior has the women thinking there is more to it.

Ashley getting divorced. Mia is broke. Robyn not walking down the aisle until that prenup is signed. Karen allegedly cheating. Charisse is back and tormenting Karen. Gizelle and Candiace beefing. Potomac is about to EAT. #RHOP

The seventh season of Bravo TV’s long-running series is all set to premiere on Sunday, October 9, with its 75-minute extended first episode at 8 PM ET/PT, where we will see the Darby’s on the verge of getting a divorce. However, Ashleys story is not exactly plausible.
In the meantime, Wendy ventures into a new business idea while Mia’s questionable social media handling becomes a cause of concern; Karen organizes a spring fling-themed celebration of life party where some of the housewives are forced to speak out on their lies.

Below is the episode schedule for the confirmed first four releases of The Real Housewives of Potomac Season 7:

Where to Watch The Real Housewives of Potomac Season 7

The new season premieres on Bravo in the US, and new episodes will come out every Sunday with streaming options available the next day on Peacock. The show may also be watched on the Bravo app. Moreover, the latest season of The Real Housewives of Potomac will be made available to watch on Hayu from Monday, October 10.
Unfortunately for fans outside the United States, there has been no confirmation of late as to whether the show will be available to stream in their native country or not, and if so, then which online streaming service will be running the show. Whatsoever, fans are hopeful that they will soon get a glimpse of the juicy new season.