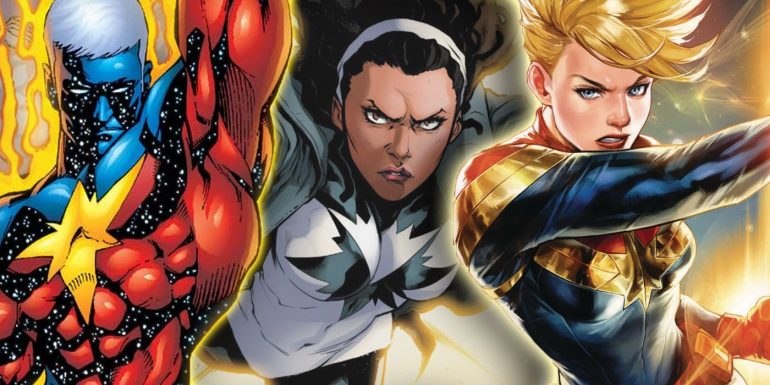 Wakanda forever! Yes, you guessed it right today we will be discussing regarding the most loved franchise Marvel Cinematic Universe.
Captain Marvel. Sounds interesting? Isn’t it? Talking about immense power and great destruction we can definitely think of Captain Marvel. The time has come when the Marvel has to offer a more powerful hero than Thor, the god of thunder.

Everyone got shocked by the ravishing and delectable power Miss Marvel or Captain Marvel had in the last Marvel movie the endgame. Fans can never think of this sort of twist in the marvel movies that anyone can be even more stronger than Thor or anyone can solely defend the humongous power of infinity Gotlet.

Taking you back to the era of Endgame where the fans have a doubt in their minds that will the villain prevail. There only creates the new hope and Miss Marvel or our own loved Captain Marvel helps all other heroes to prevail the truth. When all of the Avengers have come back to the earth to stop the Cotati from conquering Wakanda and taking control of the Vibranium enhanced soil which was in term the only thing able to increase Choi’s death blossom’s power to mind shaking levels anyone can ever think of in their long lifetime.

It was not ever expected by the fans that Captain marvel would ever given the universal weapon and promoted to the Kree accuser corps. It was found astounding that even after in Emyre 2 by Ai Ewing, Dan Slot, Valerio Schiti, Marte Gracia and VC’s Joe Scaramanga, she almost dug her own coffin while trying to channel the power of the great sword of space to kill the Cotati’s oppression over what has left of the united Skrull feet.

While everyone knows that Danvers is much more eager to earn her whole new and giant title, the role of accuser comes with unimagined and frightening new powers that’s she already wanted from the large span of time. Individuals might know that when Denver was appointed for her first-ever mission as an accuser and took her into the deep space to save a Kree vessel which has been taken into control by a Cotati warship.

But the shocking fact was that the here vessel is out of power under the weather of Captain Marvel and is about to be destroyed in style. Captain Marvel appears in and show off her brand new hammer by cracking the Cotati cruiser in half like an egg and killing its entire crew in the span of a second. After her shocking and ravishing display of powers, she was the one who refrained the vessel and sends it on its way to rejoin the Kree armada.

Danvers is a brave soldier who took on the accuser core as a way to upsurge her Kree heritage and serve the empire during a time of devastation. However, when it was time for Carol Danvers to do what accusers do, she couldn’t stop herself being captain marvel and leave her family behind to serve the populace.