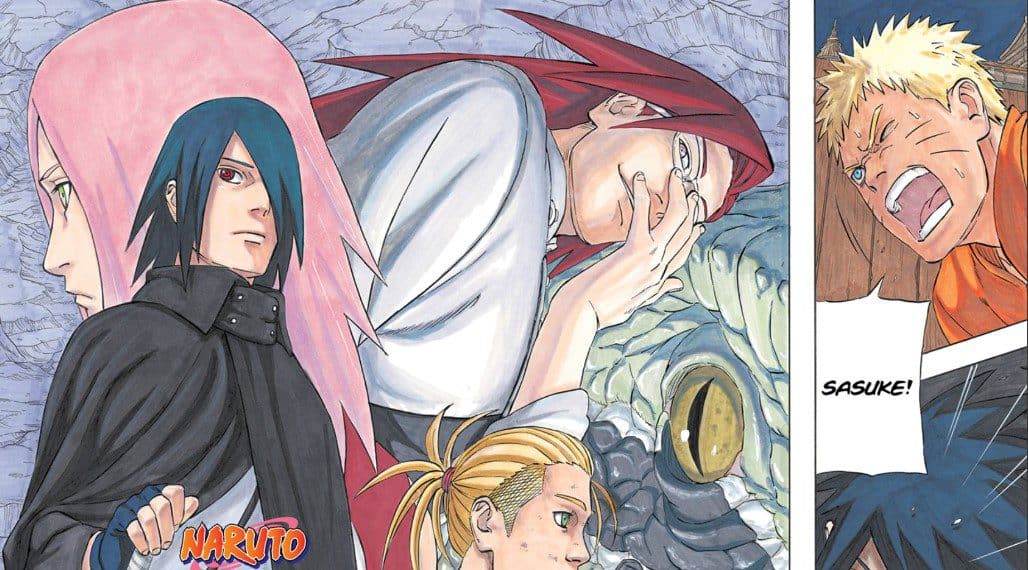 There are a lot of twists coming in Sasuke Retsuden Chapter 7. And Naruto: Sasuke’s Story—The Uchiha and the Heavenly Stardust: The Manga Chapter 6.2 was the final part of Chapter 5 of the Sasuke Retsuden novel. And with this chapter ending, we’ve now officially hit the part of the story where things are about to get out of hand and OG Naruto’s theme about “A ninja must see through deception” will be important from this point going on.

But most importantly, this chapter made all those people say, “Oh my God, why does the ninja story have dinosaurs in it?” These people are going to feel very foolish right now because the chapter also explains the plot twist that ties back to Naruto part one and explains why dinosaurs are in the story.

Before talking about Sasuke Retsuden Chapter 7, let’s do a recap of chapter 6.2. Sasuke Retsuden Chapter 6.2 opens up with Sasuke and Sakura meeting at Sakura’s office, and the two leap out of Sakura’s window and we see two things happen at once. Number one, why ninjas like Shizune, Tsunade, Sakura, and Sarada wearing high heels might not be the most practical thing for female shinobi. And number two, we see Sakura botch superhero landing. 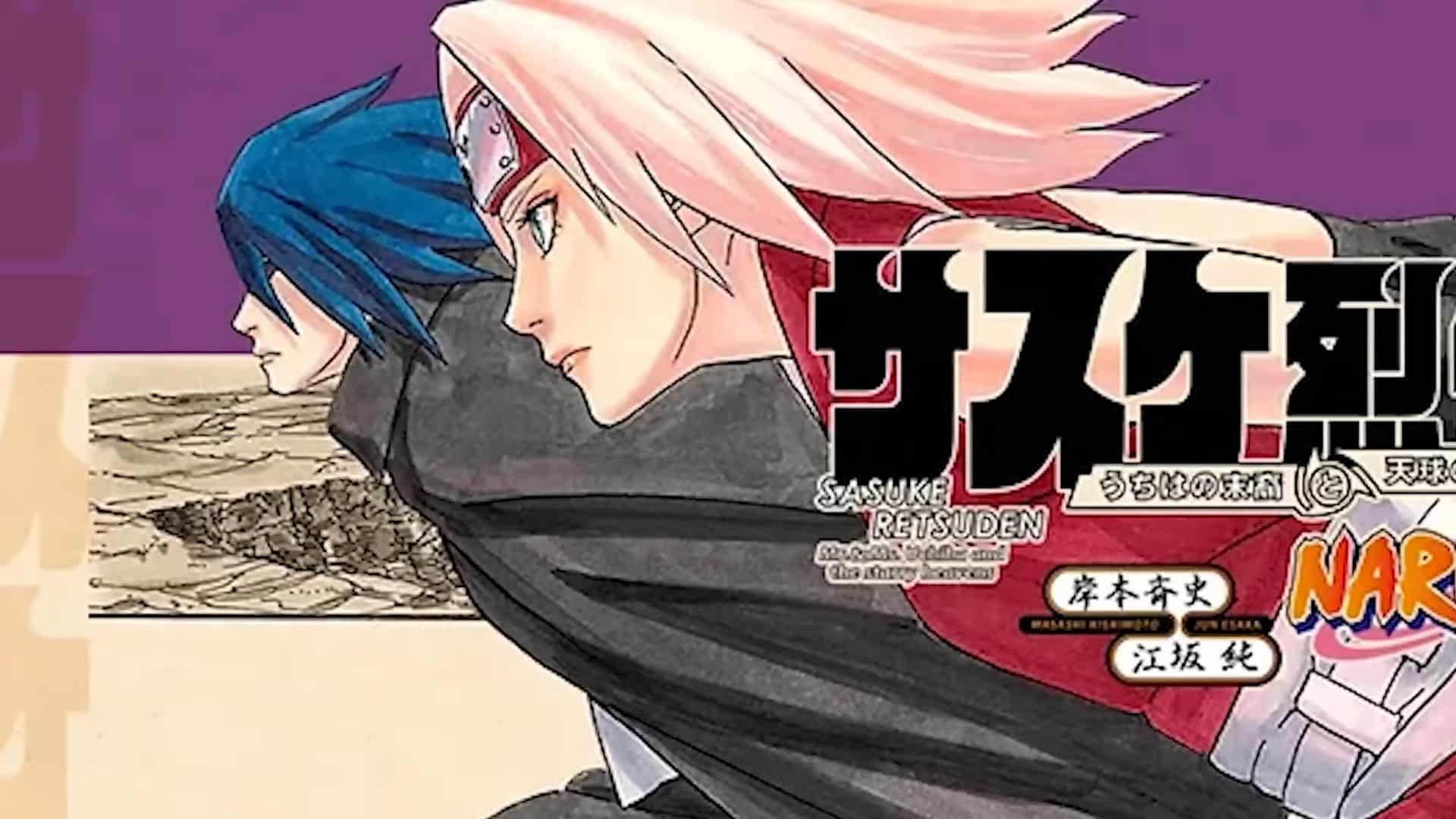 However, being the gentleman that he is, we see Sasuke catch his wife with his one good arm. And the two of them quickly began to race off towards the lake that Sasuke learned about in the last chapter when he was standing on top of the prison roof with Gigi and learned the story behind the meteor that fell to the earth.

This leads to a gorgeous double-paid spread where we see the two of them standing at the lake and after Sasuke reveals that this is where the polar particle had fallen to Earth. Sasuke says he wishes that Sarada could see something like this. And we learned from Sakura that Sarada has become obsessed with learning more about the stars and the heavenly bodies these days.

And for point of reference or something cut out from the light novel or the manga version of this story. So in the novel, Sasuke has a pretty good moment of reflection where he realizes that he’s away from home so much that there’s a lot he doesn’t know about his daughter. But the manga did make the right decision to cut that part out. Because the next scene conveys all that same information without having to show Sasuke’s internal monologue in full.

Essentially, Sasuke begins to work his way towards expressing his feelings and his insecurities in a different way in the manga, while also carrying on things that come from the light novel itself. He starts out by asking Sakura if she wants him to get her a real ring and not just the one he made out of chakra.

And when Sakura holds up her hand, you can see all the detailed scars on her hand that have been made over the many years of her being a ninja. And she says to the ring it isn’t really ideal for her hands because those are not the most feminine hands. This is a really good panel right here. 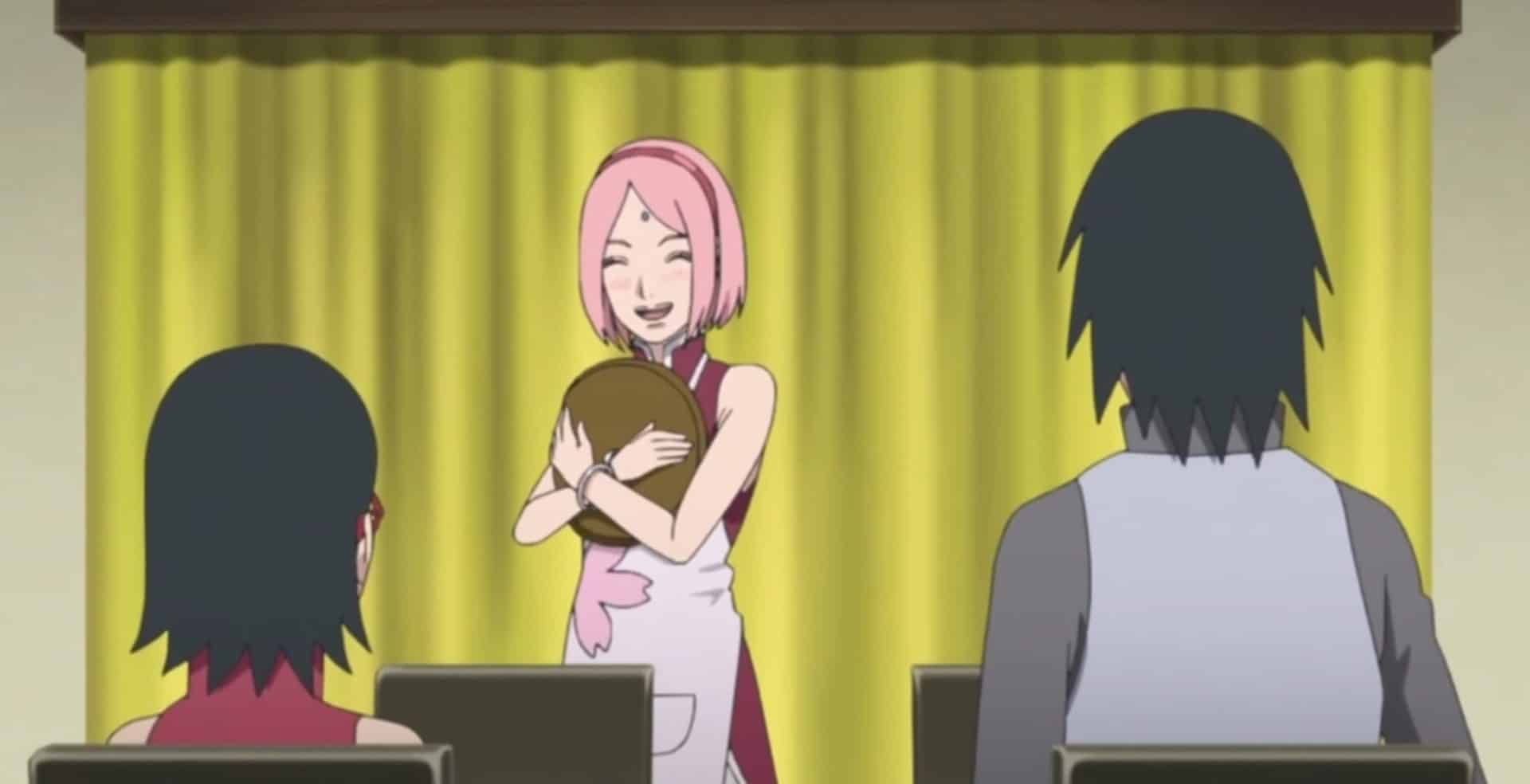 It shows that while Sakura might do traditional things like cook and raise their daughter and wash the dishes and be a caretaker in the form of healing people, she’s not exactly had the background of a woman that would value that sort of thing.

She doesn’t have the hands that she would think of for a traditional wife or mother. She’s a wife and a mother, but she’s also a shinobi first. I love this one scene because it further humanizes these two characters whom we’ve grown up within the story.

The story then begins to shift in tone when Sasuke watches Sakura with the lizard card from the playing card game. And he listens to Sakura say that the Dragon Beast ie dinosaurs used to live on the planet so they went extinct.

Sasuke’s mind puts all the pieces together and it’s not because he saw all those brainless tweets on Twitter that we saw where people said that “Boruto’s now Jurassic Park. How are dinosaurs and the story about ninjas? They never existed in Naruto except the novel”.

And this passage from the manga itself literally tells us that they went extinct as they did in our own world, except we literally see dinosaur bones. And in Naruto’s manga, we see Sasuke playing with a toy dinosaur more than once during his childhood flashbacks. They’re small details, but before we open our mouths to say something you might actually want to look to see if there’s something that we missed.

Or maybe, just maybe, there’s something we didn’t know about the series and overlooked, and the current story that we’re seeing in the anime and manga that we might not know. I mean, we got a whole dragon hand seal in the Naruto story. But somehow these creatures which the manga and anime are called Dragon Beasts. 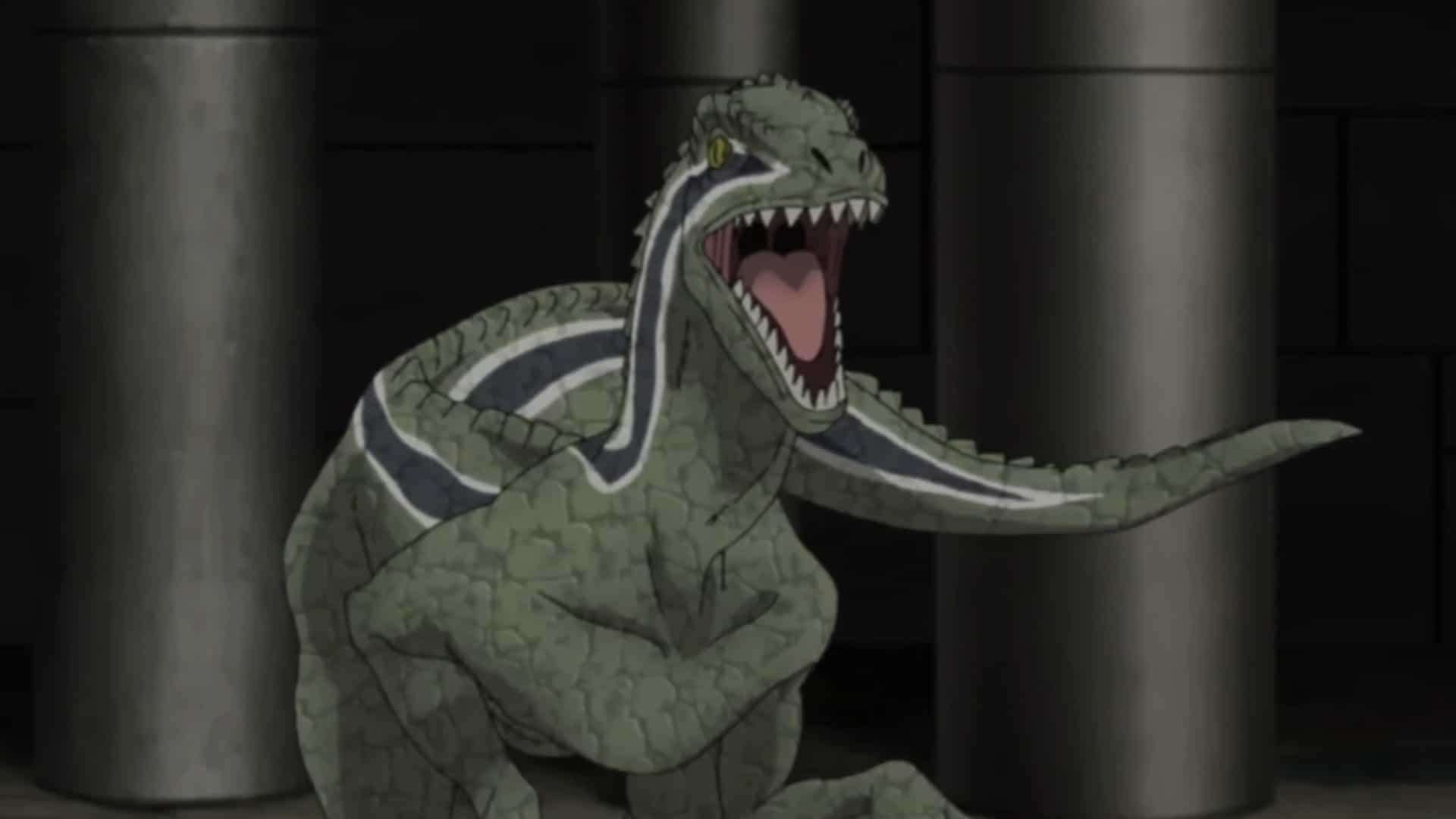 However, sarcasm aside, this brings us to the big reveal of the chapters. Sasuke watches Sakura perform the hand seals, and he’s thinking about the fossils that he saw in that room of chickens and about all the labor that they have been doing with the pic axes. And Sasuke has a realization to retreat the particle that Hagoromo left behind. This causes a giant beam of chakra to shoot up from the bottom of the lake, and a box with ceiling tags placed all over it begins to float in the air.

And despite it having a ceiling tag, Sakura can feel that Chalker pouring out of it, which further makes you realize how dense Hagoromo Six Path chakra truly is. Well, Sakura tells Sasuke they can leave the prison. Sasuke says that they can’t actually leave the prison because he’s figured out what Zansul’s plans are. And before you can say what they actually are, there’s an explosion from the prison. And Sasuke says Zansul has revived ancient Dragons via Edo-Tense.

Everybody can start clapping right now, you officially have your answer for that dinosaur being alive in the story. He’s an Edo-Tense, he wasn’t a summoning animal. The Jurassic theme park in the Naruto world didn’t have a giant dinosaur escape. He’s an Edo-Tense being controlled, which is why his limbs were generated.

That’s one of the reasons why I said this story is a Naruto story at heart. We’re seeing through deception is gonna be important. That dinosaur’s existence, the meaning hidden behind the card game, and the map that Hagoromo left behind. This is fitting since Hagoromo is the forefather of Ninja. It’s only right he leaves a puzzle within a puzzle for someone to solve. 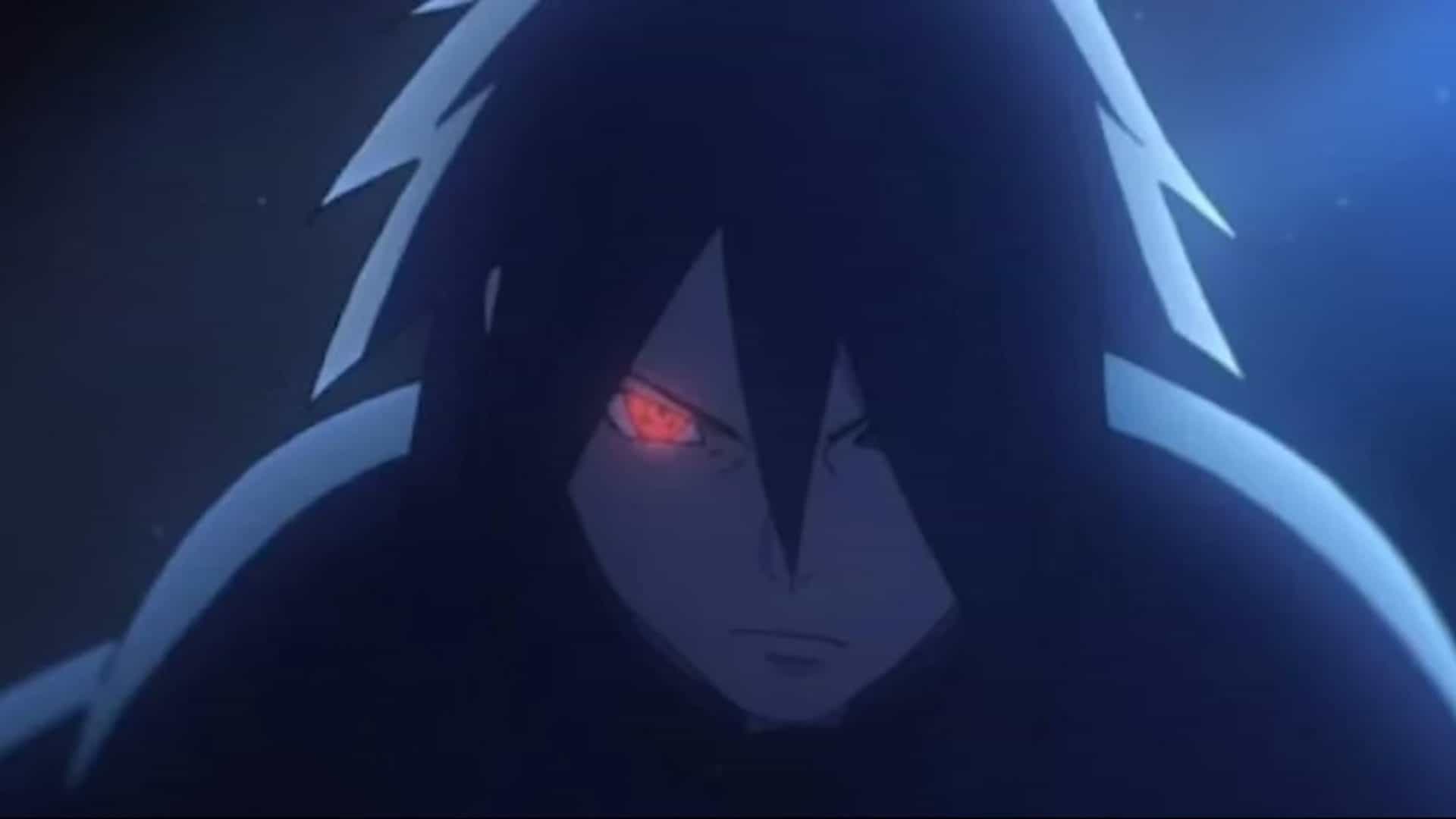 All the labor work that the prisoners are doing. It was hiding the fact that Zansul was having fossils dug up and taken to his hidden chamber. And all those chickens were being kept with the purpose of being used as sacrifices at the Edo-Tense. Most scientists agree that chickens and ostrich are some of the animals that are the closest to dinosaurs. Now we will talk about when will Sasuke Retsuden Chapter 7 be Released and some Spoilers about it.

Sasuke Retsuden Chapter 7 will be released on 28 January 2023 at 7 am PT. Now what I won’t say without getting into spoilers, because we’re about to head into the action portion of this story, is that there’s more deception waiting around the corner. And you as a reader, might wanna go back and re-read the manga. But this time you wanna cut on that handy dandy Sharingan when you do so.

Because if you read the manga closer, you’ll see what the final three plot twists in the story are gonna be, and they’re gonna shock you as they did the people who first experienced the story.

That dinosaur being an Edo-Tense should make you guys answer some of your questions. I will say there is one thing in particular that was cut out of the manga version of the story that has to do with Orochimaru.

Tobirama is credited with creating Edo-Tense. But it was actually originally created by Hagoromo. Orochimaru came to research links to Sage of Six Paths and he found information on the Edo-Tense, the original version Hagoromo made. How many of you guys saw this plot twist was coming with the Edo Tensei?

Where To Read Naruto: Sasuke’s Story—The Uchiha and the Heavenly Stardust: The Manga Chapter 7

If you want to read Chapter 7 of Sasuke Retsuden Manga or if you haven’t already read the entire manga, you can do so for free using Viz Media’s website or using Manga Plus. But you’ll need to pay for Chapter 4 because it’s locked for free reading.