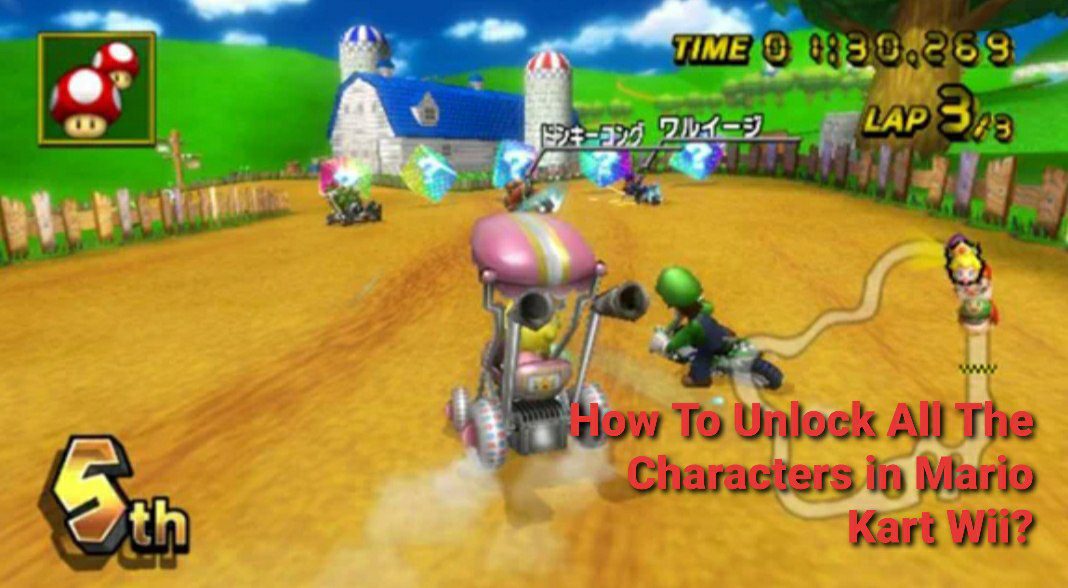 How to unlock all the characters in Mario Kart Wii? Do you play this game but are still confused? You don’t need to worry. Before getting into further details, let’s have a look at what it is. Many of you like racing games and are mostly aware of bikes and cars.

Developed by Nintendo, Mario Kart Wii is a kart racing game, being the sixth installment of the online series. It was released back in 2008, and over the years,  it has successfully made it to the Kid’s Choice Award under the category of Favorite Videogame. What makes it good? It’s because of the characters, innovative gameplay, karts, and tracks as well.

If you are a beginner in Mario Kart Wii, you may find it a bit difficult or question the process of unlocking the characters. It can be a bit tricky, but it’s not rocket science. Well, the characters in this racing game are divided into three categories- light, medium, and heavy. This is based on the determination of the type of karts to be used. Each of the characters is special in its way. You can easily do it, by following certain steps. Here is what we know.

Also Read: How To Unlock Characters In Valorant?

How To Unlock All The Characters In Mario Kart Wii?

Despite being special in their ways, there isn’t much difference among the characters in Mario Kart Wii. It shouldn’t affect you or confuse you in choosing your favorite character.

Note: For each of the characters in Mario Kart Wii, the player must earn a star in the 50cc Wii Grand Prix Cup.

There are a total of 14 characters in Mario Kart Wii. They are named as- Baby Daisy, Birdo, Daisy, Dry Bones, Funky Kong, Rosalina, Baby Luigi, Bowser Jr., Diddy Kong, Dry Browser, King Boo, Toadette, Mii (Outfit A), and Mii (Outfit B). Here are the necessities which you must follow to unlock them.

This one is the basics one. As already mentioned earlier, for unlocking Baby Daisy, the only thing that needs to be done is the usual thing, earning one star in the 50cc Wii Grand Prix Cup. It’s quite simple and not puzzling.

To unlock the Birdo character in Mario Kart Wii, there are two options. You have to fulfill either of them. One is to defeat 250 people in the kart race. If you fail to do this, you have to make sure that you have unlocked 16 fast staff ghosts. Sounds good?

Unlocking Daisy is also quite easy. The only thing that you must take care of is to win the 1500cc Special Cup.

Unlocking this Dry Bones character in Mario Kart Wii is more like unlocking Daisy. However, it’s simpler. Why? You have to win 100cc Leaf Cup to unlock this. What can be easier than this?

This one follows the unlocking criteria of Birdo. However, the number is not the same. To unlock Funky Kong, the player must unlock 4 staff ghosts. Make sure that it’s done in the Time Trial Mode.

Well, Rosalina is both the simplest and the most difficult character to unlock. Makes sense? Yes, it does. To unlock this amazing character, the player must be sure to win all the 150cc mirror Wii Grand Prix Cups.

This one is more like unlocking Birdo and Funky Kong. But here, the number of staff ghosts that need to be unlocked is 8. Sounds easy?

If you are highly interested in Bowser Jr., you have to earn a minimum of 1-star rank in each of the 100cc Retro Cups. The higher your rank is, the better it is.

Also Read: How To Unlock Moshiri Kara in Genshin Impact?

This one is another easiest character from Mario Kart Wii when it comes to unlocking. The only thing to make sure of is to win the 50cc Lightning Cup.

It’s more like Bowser Jr. But the number system is a bit different. You need to take care of earning a star in each of the 150cc Grand Prix Cups.

Another easiest character to unlock? It’s King Boo. The player needs to make sure of only one thing. What’s that? He needs to win the 50cc Star Cup to unlock King Boo.

This one is a bit boring and a long thing to cover up. Unlocking Toadette can be a bit tricky. One must focus on all 32 courses and play all of them on the Time Trial Mode. Have you unlocked it already?

This one is easy, though. To unlock Mii (Outfit A), you have to win the 100cc Special Cup.

However, for Mii (Outfit B), things aren’t the same. Not even the number system. For this, you must unlock all 32 staff data. Yes, it’s time-consuming.

Among the above-mentioned characters from Mario Kart Wii, which one is your favorite?