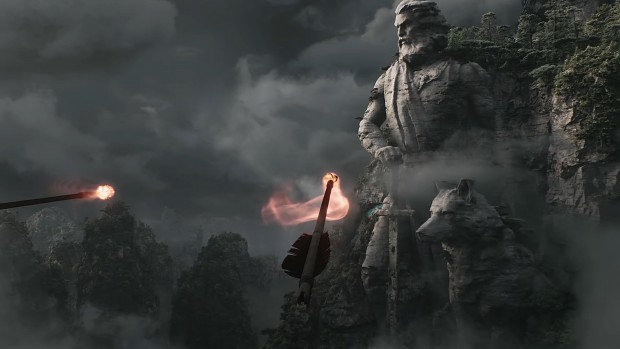 Obsidian Entertainment, known for developing games like Pillars of Eternity, Fallout: New Vegas, Dungeon Siege III, and South Park: The Stick of Truth, is coming out with what looks like an age-old open-world game taking big heights. Titled “Awoved,” and also under the same universe of the studio’s other game, Pillars Of Eternity, it is the next big thing in the market. The game is being compared to the popular Skyrim’s Elder Scrolls game. So as long as The Elder Scrolls 6 still far away, Avowed has got the perfect time to debut. The studio has been applauded for the past decade with its work in the RPG section. Especially the unique twists they add to these games. So, Avowed is set to mark the studio’s big step into a bigger playing field.

With the success of Pillar’s Of Eternity, Awoved has kept a lot of hopes from fans. The first glimpse of Avowed at Microsoft’s July 23 Xbox Series X gaming showcase was enough to get humongous attention. Well, Most of the details about the game are still under wraps. But still, we have tried to bring out everything ranging from speculated release date to gameplay to the features of the game. So, here we are discussing Obsidian Entertainment’s newest big game in the field, “Avowed,” and what to expect from it. So with no further adieu, let’s begin.

The Announcement Trailer Of Avowed

The Announcement Trailer for “Avowed” was released by Obsidian Entertainment at the Xbox Games Showcase last year. The trailer gave the players a cinematic dive into the world of Avowed. With all the ominous music and dark environment playing its cue, the trailer shines with impeccable graphics and introduction to the new world under the universe of Pillars Of Eternity. The trailer opens up with some lit arrows used in the wars, and these arrows guide us to the open world that players are about to play inside the upcoming Avowed.

With the voice-over speaking about wars, it heavily emphasized Oaths, which is speculated to be the game’s main theme. At the end of the trailer, it reveals that the game will be played from a first-person perspective. The player wields his sword in hand and casts purple-colored magic in others, waiting for a big bad villain to arrive, taking his footsteps heavily. Probably, a big enemy fumed with flames. Some Redditors have pointed out the language written on the sword was previously used in Pillars Of Eternity. The announcement trailer certainly closes in, and even though there was no gameplay revealed, we believe that trailer was still enough to hype us up. Check out the trailer below.

Unfortunately, Obsidian Entertainment has not revealed any news on a release date for the game. Many believe the release could even be years away as the studios are really busy with their other works. Over 100 people are still working on the game, and it is being developed for two years now. The rumored target date suggests that game might come out in 2022 or 2023.

Obsidian Entertainment is currently working on Grounded, another upcoming survival game. Also, they are working on DLCs for The Outer Worlds. Plus, one of the game’s DLCs was announced before Avowed, which hints that Avowed might not be coming anytime soon. Atleast before The Outer Worlds DLC.

From the announcement trailer, the only thing confirmed is that Avowed will have first-person perspective gameplay. On the other hand, some rumors speculate that it will take elements from Skyrim. Obsidian also posted a few job listings but are those for Avowed or Grounded remain a mystery. These job listings included “combat with an emphasis on an exceptional first-person melee experience” and “combat actions utilizing both first and third-person animations.” Well, those listings remind us of Pillars Of Eternity.

Rumors About Avowed In The Air

Although Obsidian Studios haven’t revealed much on Avowed, rumors are bound to come. Either from insiders, fans, or based on the studio’s previous works. Just making it clear that these are just rumors which are yet to be confirmed but interesting to look at.

Taking a look at these rumors, they say that the open-world of Avowed will be much bigger than its comparison of Skyrim. But not in size; as a matter of fact, Avowed will have a much denser world. The big focus of Avowed is rumored to be on lighting, the reactivity of the world, and especially the next-gen AI systems. The game is also rumored to come up with a real-time weather system. On the other hand, it is said to have an in-depth character creation with advanced details added. The world will definitely have many factions but will be way different from that of Skyrim’s.

Two Cities have been planned for the game, along with small settlements surrounding them that will appear within the dots in the map of Avowed. There will be new additions of creatures coming from Obsidian’s previous game, Pillars Of Eternity. Also, the game is believed to feature larger than life boss battles.

The game’s main setting is rumored to The Living Lands region of Eora, which was a northern frontier not explored in Pillars Of Eternity. The players can enlist companions, but the process will be different from the previous RPGs.One of the rumors is teasing a Dynamic Presentation of dialogues. Like the game Morrowind, the studios might be planning to let the player kill any certain key character to dismiss the main plot.

Well, these were some rumors which are yet to be confirmed. But yes, they do point out a lot of advancements in the gam. So, we will keep you updating on the development of Obsidian Entertainment’s Avowed and its release dates. Until then, we would like you to stay tuned with Otakukart for more news on entertainment, TV shows, movies, anime, and gaming,