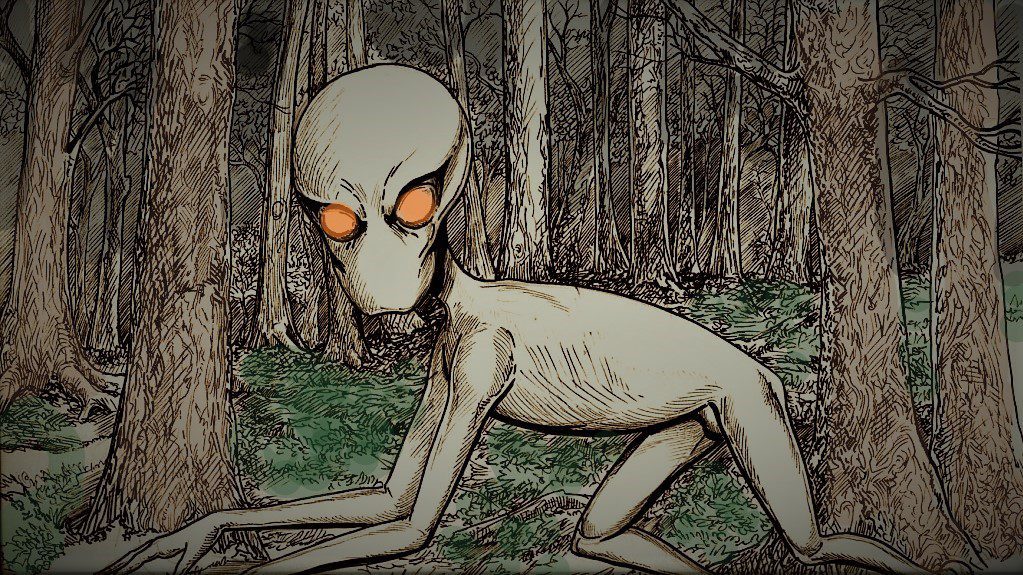 An Accute representation of the Dover Demon

For more than 25 hours on April 1977, a strange creature from another world made its presence known in the wealthy and otherwise completely quiet and idle suburb of Dover, Massachusetts. The Dover demon (as the creature came to be called), first appeared at 10:30 on the evening of April 21st, when three 17-year-olds were driving north on Farm Street, a dark lane that comes to Dover. The driver, Bill Bartlett, thought he saw something creeping along the low walls and slinking through the bushes to his far left.

Then his headlights illuminated something he had never imagined in his wildest dreams. It was a beast from the depths of hell. The creature slowly turned its head and stared into the light, revealing two large, lifeless eyes that resembled something out of a horror movie. Bill later said that the eyes looked like orange marbles on the otherwise featureless face with no apparent nose.

It had a head shaped like an upright watermelon and nearly the size of the rest of its body, which was thin and spindly. The hairless skin had the apparent consistency of wet sandpaper. About 4 feet tall, it had been making its way uncertainly along the wall, rapping its long fingers around the rocks as it moved.

The sight struck Bartlett speechless, and for a few seconds later, and when he found his voice, his headlights had passed the creature. His 2 companions, their attentions elsewhere, had not seen it at all. Not long afterward, 15-year-old John Baxter was walking home up Millers High Road after dropping his girlfriend off at midnight. As he was walking, he saw a short figure approaching and assumed it was his friend who lived on the street. Baxter called out to him but got no response.

The 2 continued to approach each other until the short figure stopped. Baxter stopped too and asked, who is that? The sky was overcast, and he could see only a shadowy form. When he took one step forward, the form shot off to the left, ran down a shallow gully, and dashed up the opposite bank. Perplexed, Baxter fallout the stranger until he got to the gully. He looked across, and 30 feet away was something with a monkey-shaped body, a figure eight-shaped watermelon-like head, and glowing eyes. Its long fingers were entwined around a tree. 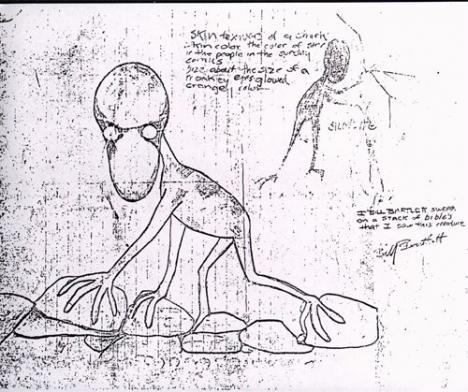 Initial Sketches by the Witness

Baxter felt suddenly uneasy and left the scene. The next person to see the Dover daman was Bill Bartlett’s friend, Will Taintor, eighteen. Taintor knew about the creature from Bartlett. Still, he was shocked when he and his friend Abby Brabham saw the thing along Springdale Avenue. Their description matched Bartlett’s, except where Bartlett described glowing orange eyes, they swore the eyes were green.

When investigators interviewed the witness, they were impressed with the consistency of their testimony. They were also impressed when the police chief, the high school principal, school teachers, and the youth’s parents all set the young people were honest and reliable. One of the investigators, Walter Webb, observed that at the conclusion of his probe into the case, none of the witnesses were on drugs or drinking at the time of his or her sightings; so far as we were able to determine, none of the teachers or students in this affair made any attempt to go to the newspapers or police to publicize their claims.

Instead, the sightings gradually leaked out. As for the idea that the eyewitnesses were victims of somebody else’s stunt, this seems most unlikely chiefly due to the virtual impossibility of creating an animated life-like demon of the description. So, what was the Dover demon? Somehow suggested it was an extraterrestrial. 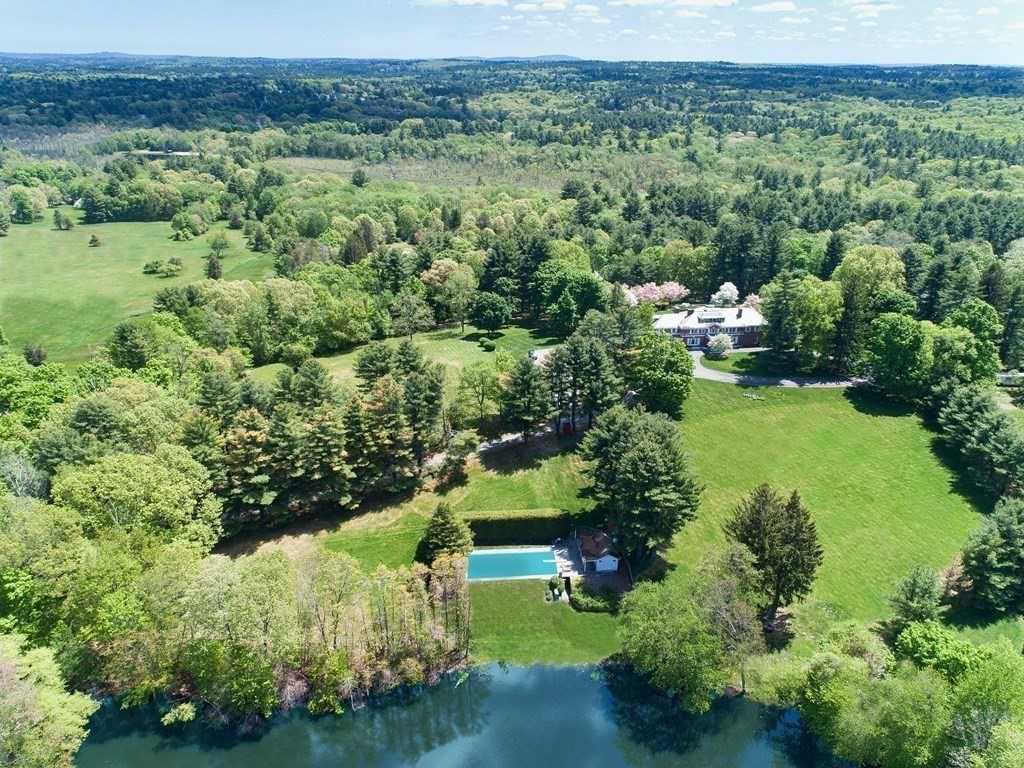 An Overview of Farmstreet, where the demon was found

Others say it might have been known to the Cree Indians of eastern Canada as Mannegishi, little people with round heads known as long spindly legs and 6-fingered hands. The legend goes that these people live between rocks in the Rapids of streams and rivers.

Read More: The True Story Of The Charterhouse Entity