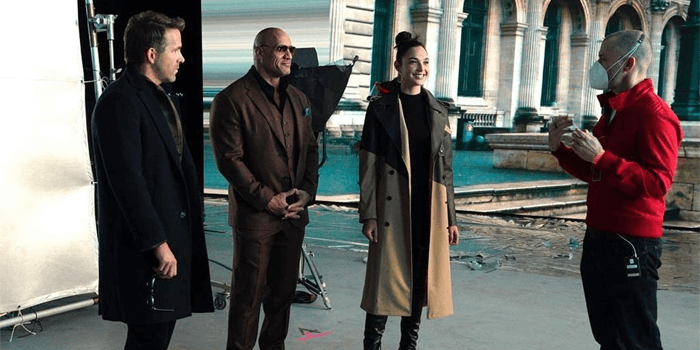 Red Notice: Later in 2021, all the subscribers of Netflix will witness the release of the biggest Netflix Original yet. This is where Dwayne Johnson is going to make his official Netflix debut. It will be done in this highly-anticipated film. The genre of this project excels in the department of action as well as comedy. Here, we have wrapped up everything that needed to be known about the Red Notice on Netflix. Red Notice will drop out on Netflix and has been written and directed by Rawson Marshall Thurber. It is an action thriller with loads of humor.

All this while, Red Notice can be considered the first Original to get directed by Rawson, but it is the third collaboration between him and Dwayne Johnson. The actor has previously starred in Central Intelligence and Skyscraper by Thurber. Before Netflix even gained the rights to Red Notice, the bidding wars were won by Universal and Legendary Pictures. Universal started hesitating on the project, though, but Netflix swooped in and got fully committed to funding Red Notice, thus witnessing the film changing homes.

There is no release date scheduled for Red Notice officially by the creators at this point. Although, the film is set to release sometime in 2021. Thus, we are expecting to see this film released sometime around the summer of 2021. This will prove it to be the Summer blockbuster of Netflix. The film is also highly anticipated as one of the biggest Netflix Originals to look forward to in 2021. As for the plot of this film, nothing much has been disclosed.

A slight piece of information has been given away, which reveals that INTERPOL has put out a Red Notice in the form of a global alert for all the agents across the world. They have done so to catch the most wanted art thief in the world. Now, we shall head over and discuss the cast members of Red Notice. Also, you guys should keep in mind that the roles these actors and actresses will be playing have not been revealed by Netflix just yet.

First, we have on our list is actor Dwayne Johnson who has been in Jumanji and Moana and Fast and Furious. Then the second big name on the list is Ryan Reynolds from Deadpool. Gal Gadot from Wonder Woman is also going to star in Red Notice. Then we have Ritu Arya from The Umbrella Academy. Chris Diamantopoulos from The Three Stooges. Ivan Mbakop from Loop as well as Victus and The Millennial. Vincenzo Amato from Unbroken and Golden Door.

Filming started for Red Notice back in January of 2020 but was delayed in March. Then production safely started from the 14th of September 2020 after everything was kept in check. This includes the safety measures for COVID-19. Officially, it was wrapped up in Italy on the 18th of November 2020.