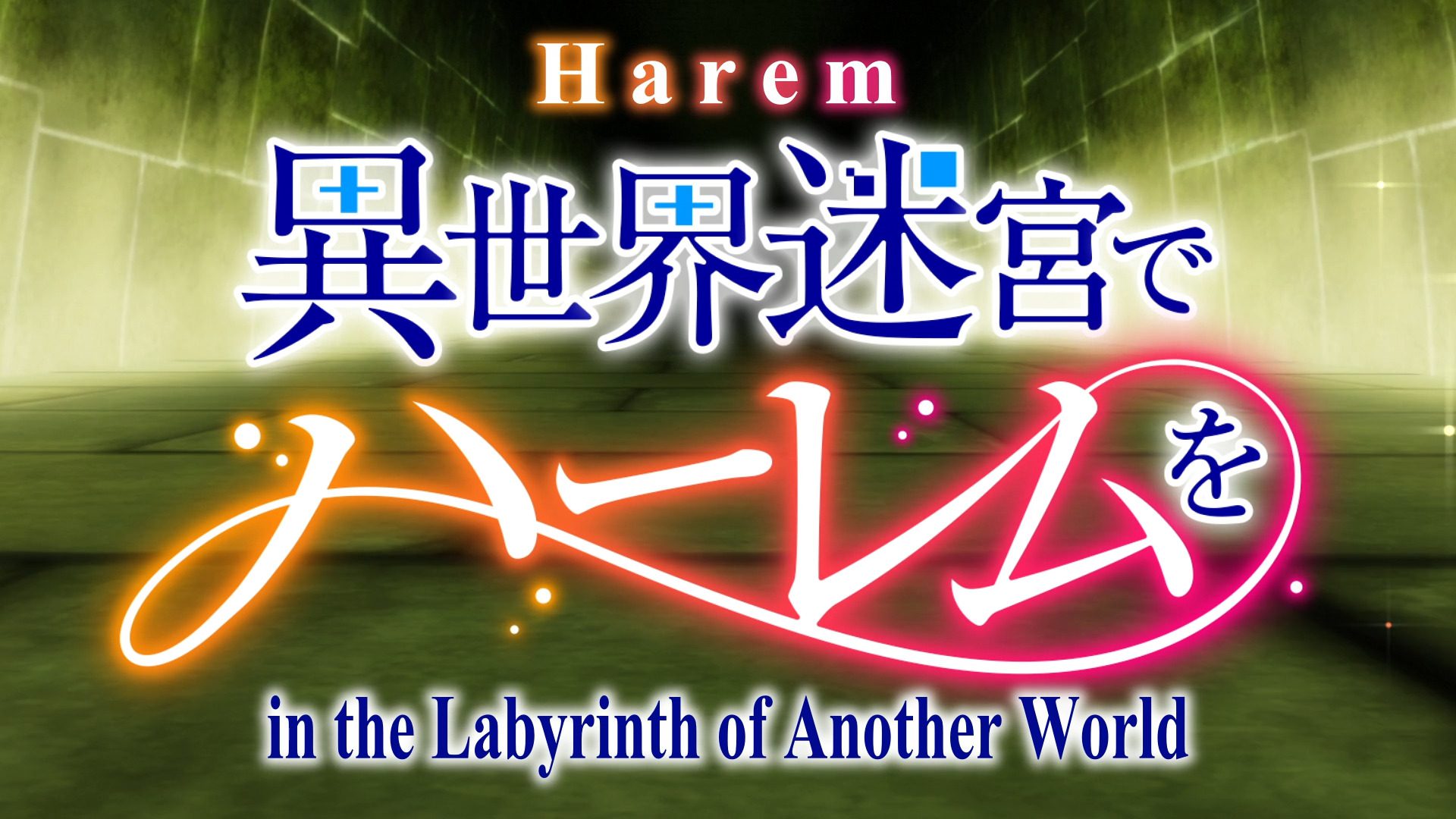 We all use the internet to pass the time, but imagine if you were transported into an entirely different realm of fancies and games. That would be incredibly strange and perplexing, isn’t it? The topic of discussion today is Ambushing the Bandits, the seventh episode of Harem in the Labyrinth of Another World. In addition, we will summarise each episode so you won’t feel left out. At Otakukart, we always have your back.

An unusual website is discovered by Michio Kaga, a high school sophomore who is struggling with life and society, as he is surfing the web. The website, which features a series of questions and a scoring system, can be used to develop areas of expertise for a character. After finishing his character, Kaga was taken to a fantasy world simulating a video game and reborn as a strong man with the capacity to seduce idol-level girls. This is where the story of the harem and the cheating of a reborn guy begins.

Shikidouji and Shachi Sogano are the authors of the Japanese light series of novels Harem in the Labyrinth of Another World. User-generated books are released on the official website Shsetsuka ni Nar. From 2011 until 2019, the website ran online serials. It was later purchased by Shufunotomo, who since December 2012 has published twelve parts under the Hero Bunko banner. A version of the comic with graphics by Issei Hyju has been published monthly since April 2017 in Monthly Shnen Ace by Kadokawa Shoten. It was collected throughout eight tank-bon volumes. Passione’s interpretation of an anime TV show made its premiere in July 2022.

Also Read: Harem in the Labyrinth of Another World Episode 5 Release Date: Kesshō 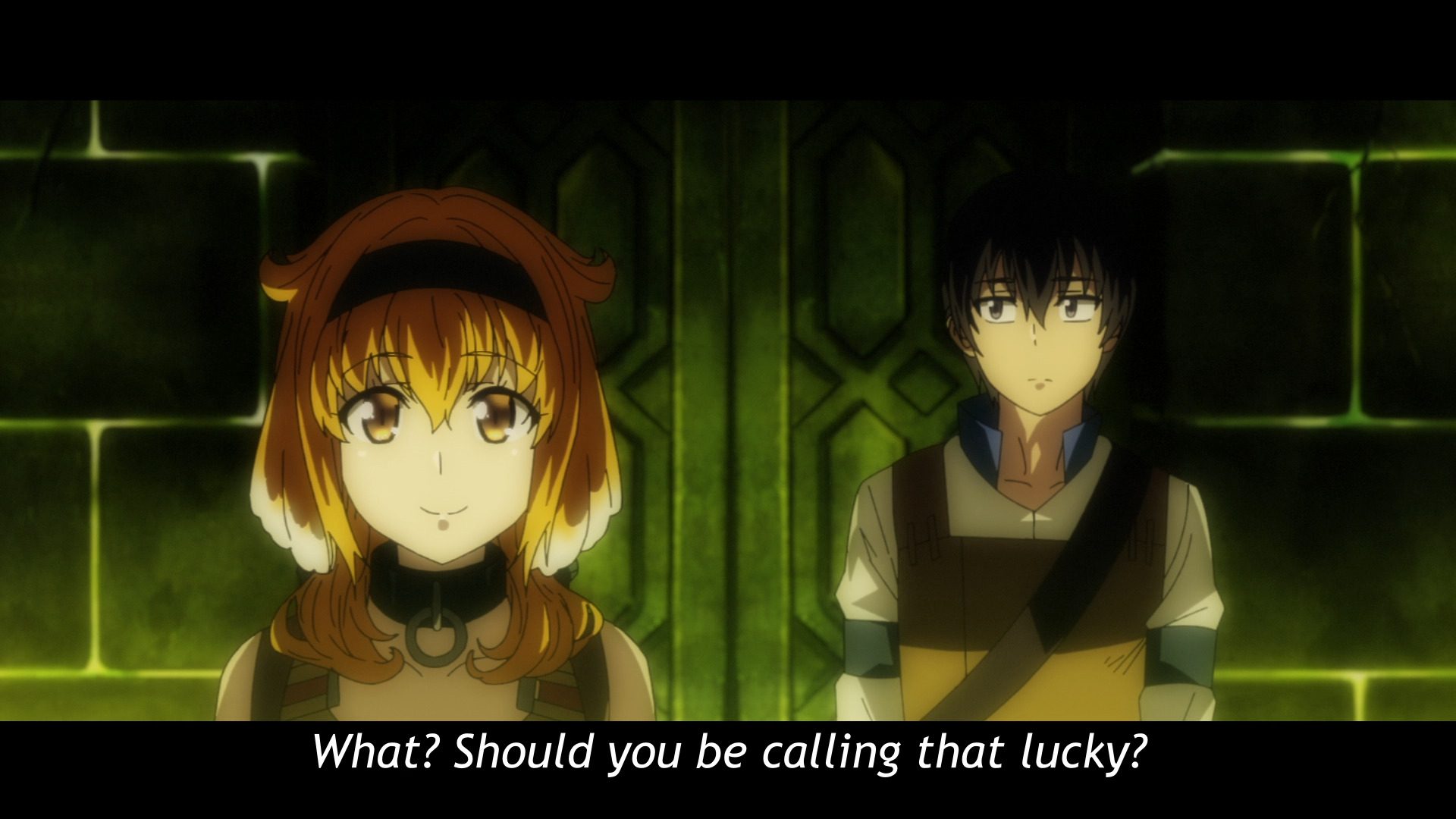 Harem in the Labyrinth of Another World Episode Recap

Michio Kaga starts taking part in a low-cost online game that he thinks is virtual reality. He uses his sword Durendal to kill numerous bandits who have invaded the community. The village head, Somara, rewards him by giving him the robbers’ tools. Kaga discovers the world is real when he tries to check out and that he must finish the game first. A peasant who tried to steal Kaga’s wealth was jailed for life for his crime. Kaga heads to the city of Vale to sell his booty, the thief, and claim the bandits’ ransom.

He goes there to collect the reward and meets Alan, a slave dealer, who buys the thief and informs him that a new labyrinth has been found close by. As Kaga is drawn to the labyrinth, Alan recommends getting a slave—specifically, Roxanne. She is a beast woman, which makes her handy in battle and ensures that she will be virginal if he wants to use her as a sex slave. Kaga, who feels bad for even considering it, is nonetheless mesmerized by the idea of a consenting sex slave and Alan’s slick sales pitch, leading him to hastily agree to come back in five days with the nearly 450,000 gold needed to buy Roxanne. 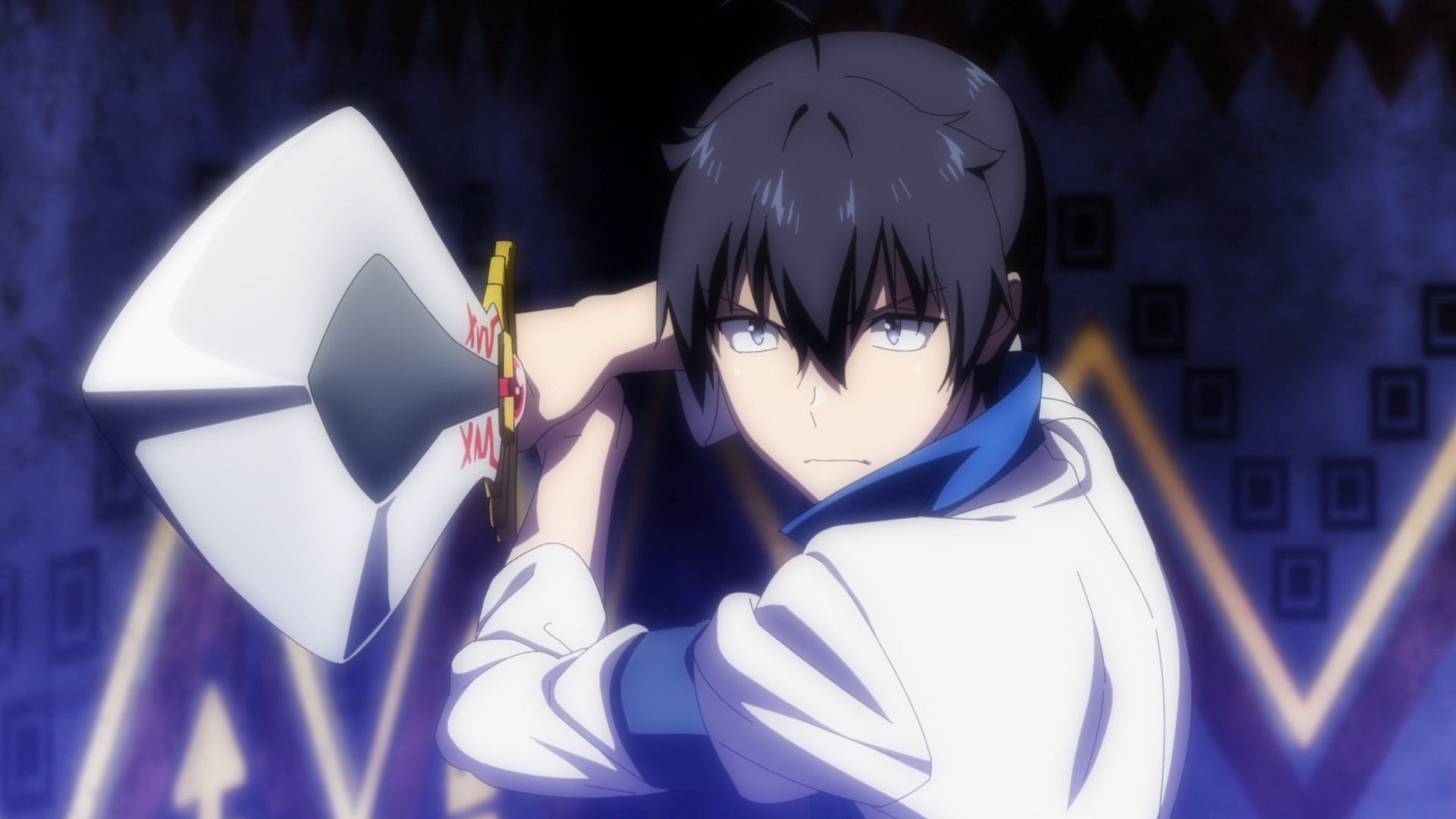 Kaga, who is now older and has five female slaves, returns to the village where he initially came to life. He hands Mio, a little kid, a scimitar of rage after spotting Mio. Roxanne asks Kaga about it, but he merely replies that he knows about Mio’s father. Kaga has currently sold his wealth but still requires an additional 70,000. He chooses to go into the labyrinth to steal things to make money quickly. He conceals his sword Durendal in his profile menu and buys a simple scimitar out of concern that it could be too alluring for thieves. He enters the labyrinth and starts experimenting with his newfound abilities.

After defeating the creatures, he realizes that losing magic makes him depressed, so he vows not to use spells until he can replenish his magic supply. He starts with pitiful stuff, therefore to get better loot he has to fight through increasingly challenging enemies. He nearly perishes after unintentionally running into a monster nest; only Durendal’s magic absorption and health enchantments save him. He returns to Vale after disposing of the nest and discovers that the bandits he killed’s companions are nearby. Kaga chooses to go after them for the reward. 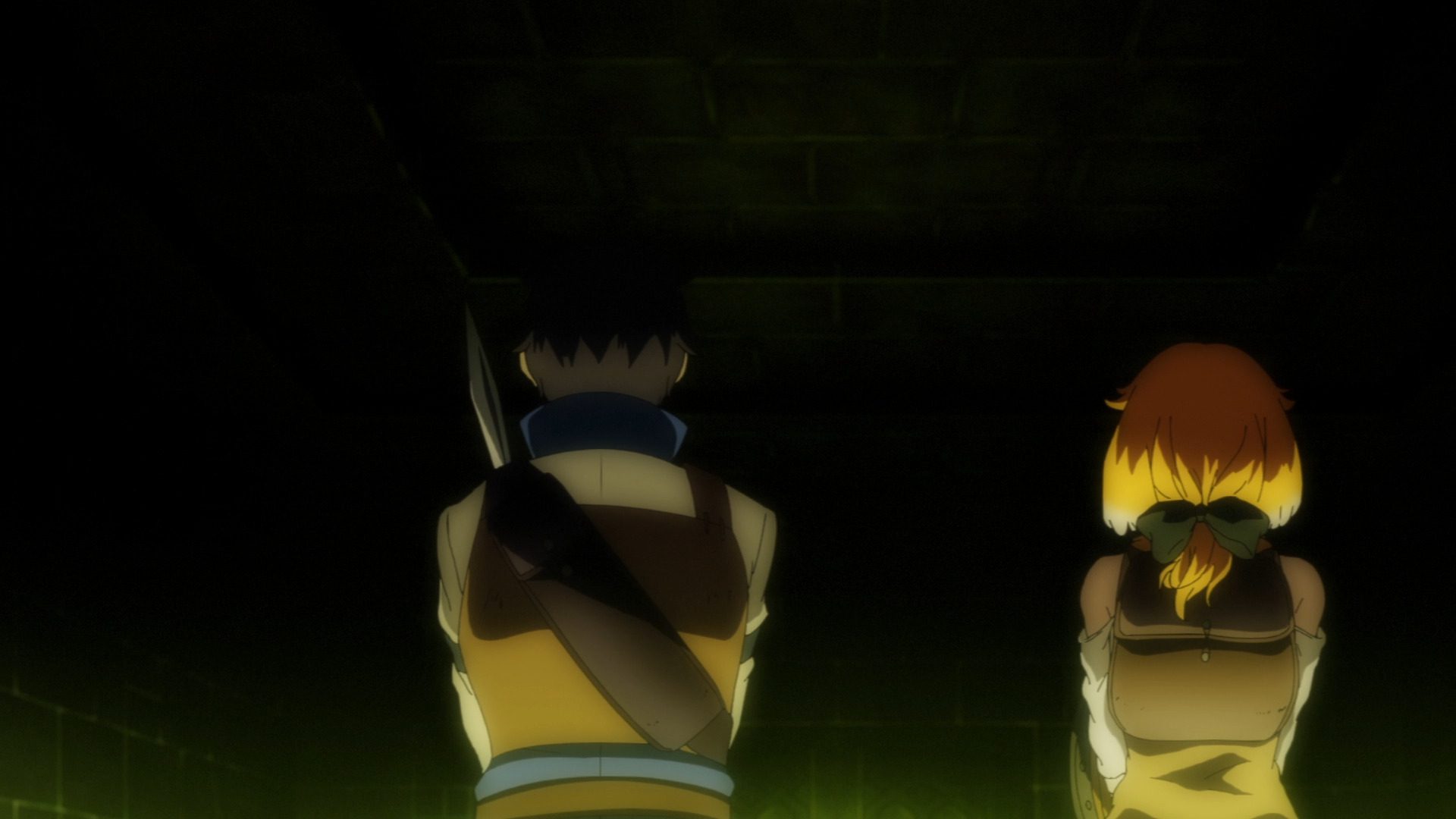 Kaga investigates the slums and learns that some of the city transforms into a red-light district after dusk on the theory that robbers would prefer to remain concealed. Kaga manages to track down a bandit and pursue him to their base of operations despite all the diversions. Kaga keeps an eye on the numerous different bandit organizations to study their customs. His landlord tells him that after an influential boss was assassinated in an attempt to regain control of his region, bandits started killing one another. The bandits Kaga had killed earlier belonged to a struggling gang that the other bandits had chased from Vale.

Roxanna has less than a day left to be bought, so Kaga moves. Kaga infiltrates the headquarters and kills numerous bandits while they sleep, but when other bandits are notified, Kaga is compelled to transport them into the labyrinth. When Kaga gets enough money, she buys Roxanne from Alan by trading them for the bounty. Kaga is taken aback when Roxanne apologizes for thinking he wouldn’t be able to afford her. Roxanne is relieved to have an owner now that the slave contract is in place, and Kaga can unwind knowing he was successful in purchasing her.

Kaga may get a bigger room thanks to his additional cash. Kaga notices Roxanne is visibly anxious and fears the idea of her sharing a bed spooked her. He later realizes he accidentally reserved a room with a double bed rather than two single beds. He is capable of reassuring her that, in addition to wanting to share a bed with her, he just wants her to go into the maze with him as a combatant. They return to their hotel after buying all of Roxanne’s adventuring supplies, including underpants. Roxanne demonstrates her skill in fixing and maintaining machinery, but as night falls, they both become more anxious. 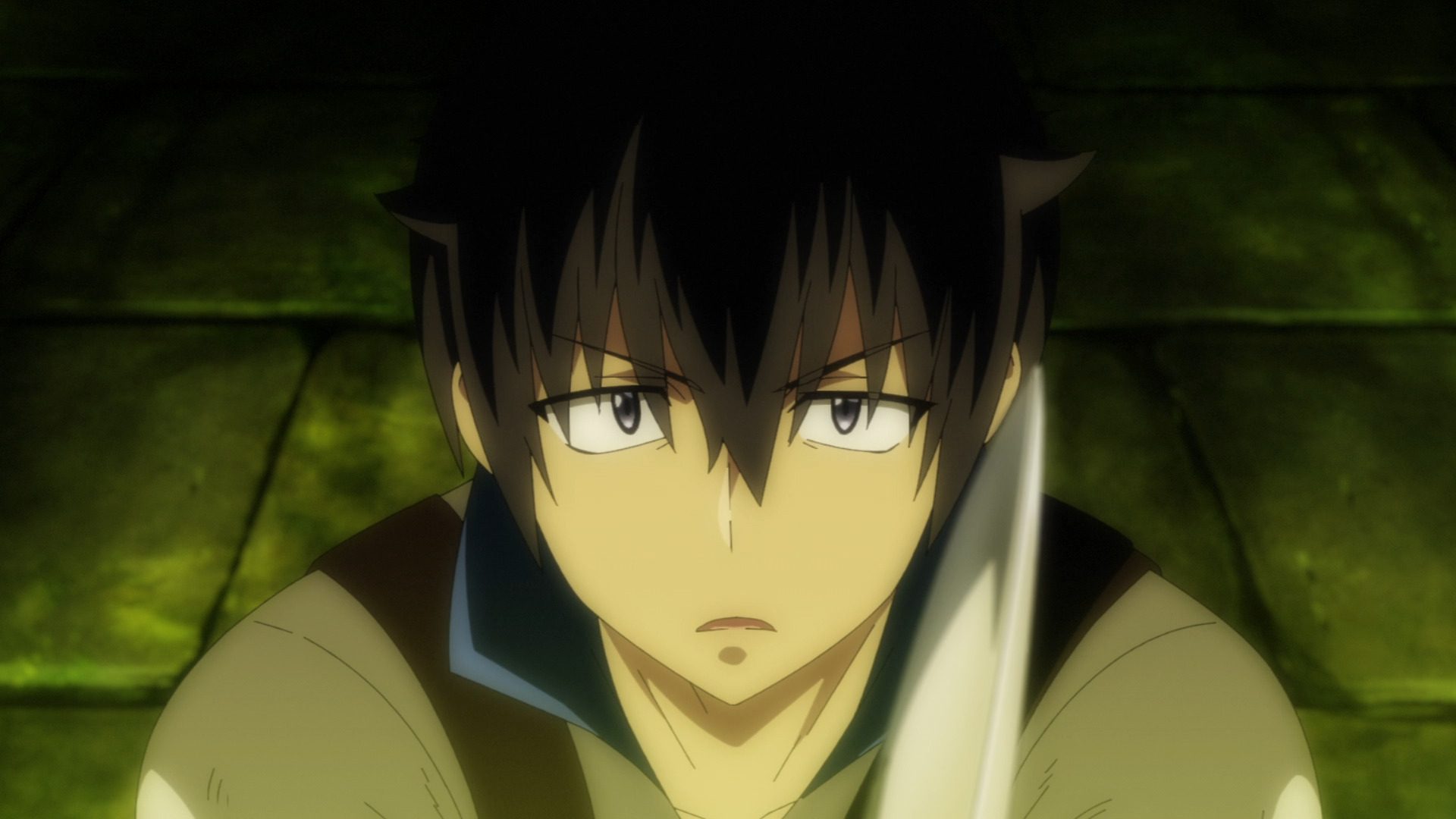 Kaga can’t help but stare at and touch Roxanne’s body, but he feels awful about it afterward. Despite their embarrassment, they are capable of washing each other’s backs, shampooing each other’s hair, and cleaning Roxanne’s tail. Finally, they get into bed together and engage in sexual activity while making sure Roxanne is having as much fun as they are. Roxanne kisses him the following morning, but Kaga believes she just did so because he requested her to before they went to sleep. Nevertheless, Kaga chooses to start their first journey into the labyrinth.

Roxanne responds to Kaga’s inquiry on how to upgrade his gear with skills by instructing him to seek a rare monstrous skill crystal and to have a smith bond it to it. Unfortunately, only dwarves possess the skill of a blacksmith, and they are frequently unreliable. Kaga decides to add a reliable dwarf to the group. Kaga discovers inside the labyrinth that it can take several months to create a Magic Crystal that can be loaded with monstrous magic and sold for enormous sums of money. Kaga discovers that although two empty crystals may store the magic of a million monsters, most people only sell them after 100,000.

Roxanne takes up a healing leaf that the Tree-type boss dropped after Roxanne defeats it, earning the title Herbalist. They are given access to Floor 2 as compensation for defeating the boss, but Kaga also wants the Herbalist title, so they go back to the first floor to face the boss there. Kaga can make health potions using the medical leaf because of her title as a herbalist. As he enters the city again, Kaga spots a bandit keeping an eye on Alan’s trading post and tells him. According to Alan, the robber that Kaga had delivered to him was recently purchased by men who appeared to be dangerous. As a result, Alan believes the thief was secretly a bandit the entire time and the men who purchased him were part of his gang.

Alan surmises that the thief, who is still inside the trading house, was instructed to wait until everybody was fast asleep before opening the door and letting the entire bandit group inside. Kaga requests to be employed as a bodyguard because Roxanne has pleasant memories of Alan’s former employees. Roxanne and Kaga spend their evening in bed before going back to the trading post at night to team up with Alan’s battle slaves to surprise the robbers.

Harem in the Labyrinth of Another World Episode 7 Release Date

You can stream all episodes of Harem in the Labyrinth of Another World on Ani-One. It is the official streaming partner of this and many other animes.