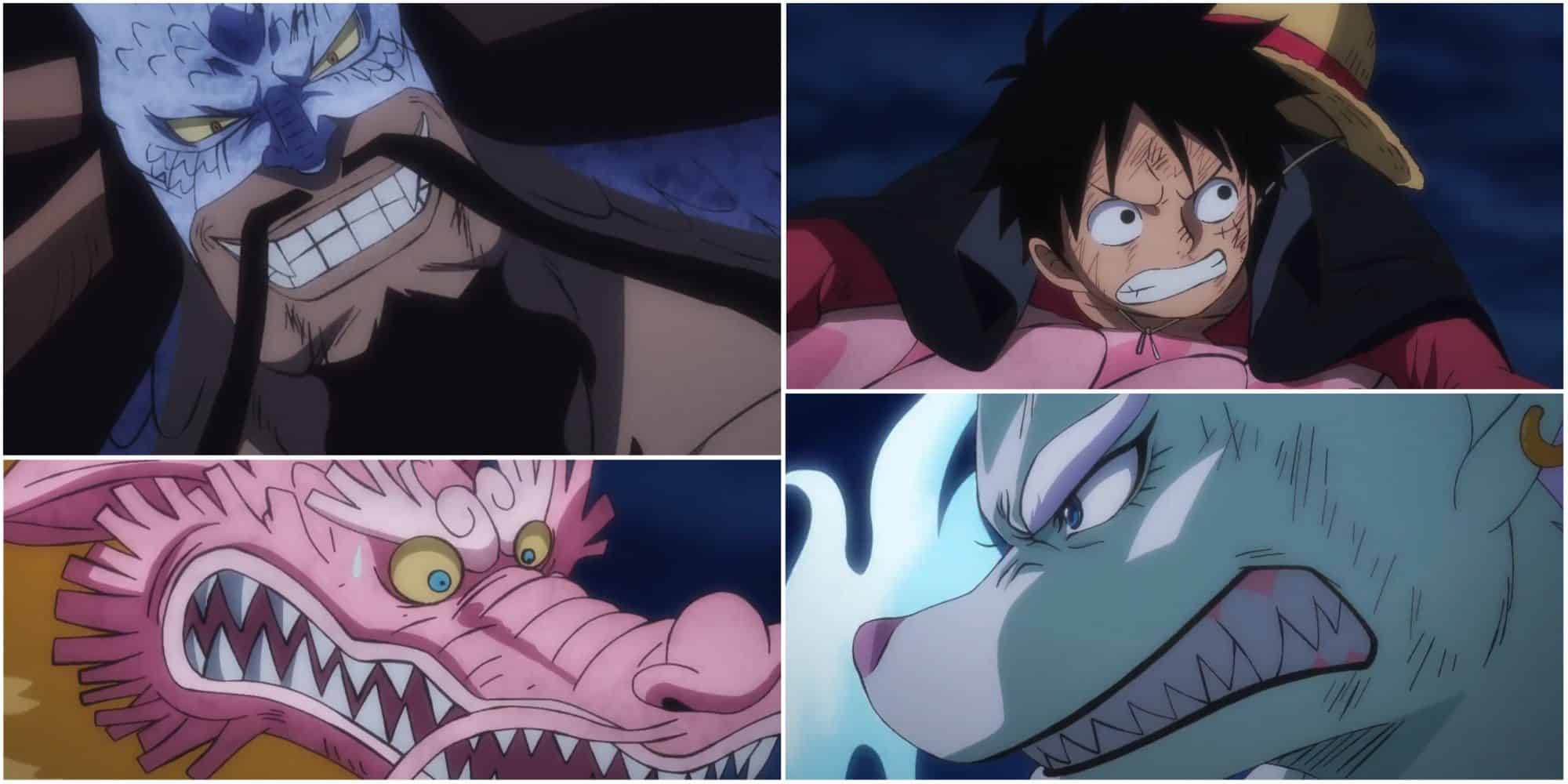 One Piece episodes release every Sunday, and it’s true that even though the anime is running at a slower pace than the manga,  each episode always leaves us with anticipation and excitement. We have a lot of catching up to do with Luffy and Momonosuke, as well as Yamato’s resentment for her father, Kaido.

Yes, Momonosuke and Luffy finally meet again, but in adult form as a big dragon, and they are ready to take back Wano. Yamato, on the other hand, maintains her desire to become Oden and fight her father. There have been a lot of battles in the past episodes, but the most anticipated one is yet to begin.

The big battle in Onigashima is right around the corner, as Luffy is on his way to the rooftop now that he has Momo, the giant pink dragon who can fly. Meanwhile, the fight is already intense between Kaido and Yamato. So let’s get started with a quick recap.

This episode was all about Yamato and her backstory, but before that, Luffy and the giant Momo had their screen time, which was hilarious. One Piece never misses its comedic timing. Luffy rides on Momo to make his way to Onigashima, but Momo is afraid of heights, and they soon fall. The Heart Pirates and Shinobu keep staring at them.

Coming back to Yamato, we saw the flashback when she was a kid and how she first realized that she wanted to be known as Oden and called herself Kozuki Oden. Right then, her father arrived, seeing the shambles as she beat up all the men without even touching, putting her in chains by her pathetic father, who refused to accept her as Oden. 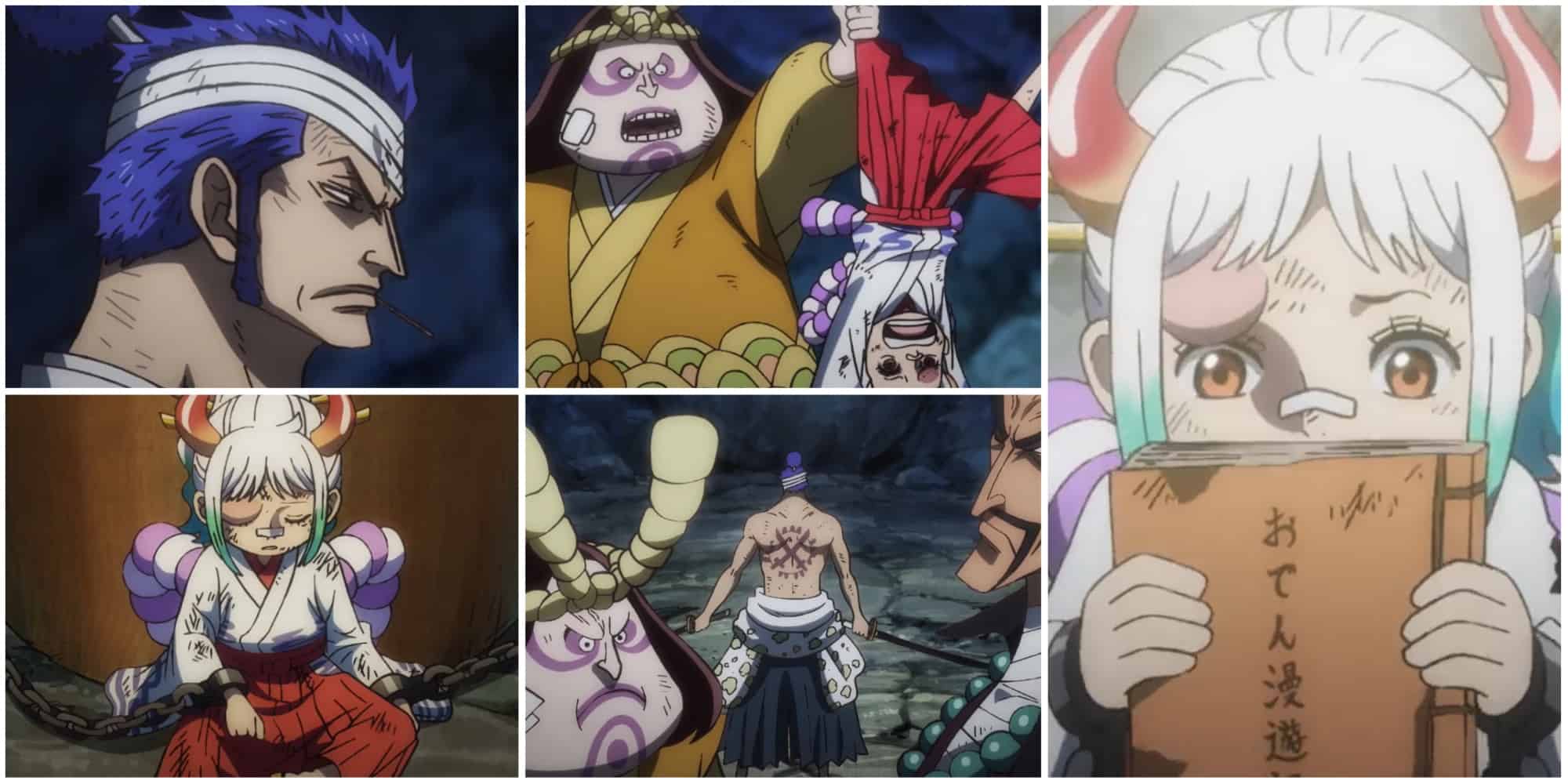 She was shackled in this dark prison, where she met a few Samurai known as the Great Swordsmen of the Land of Wano. She thought they would kill her, but instead they freed her from the chains as they were also allies of Oden. These samurai kept her safe, and they believe that she can become a great fighter when she grows up.

Yamato showed them Oden’s journal that she found at the foot of Oden castle and told the Samurai to read it. There Oden wrote about his journeys and mentioned how the Land of Wano once was connected to the rest of the world. He believed that in twenty years, young, strong pirates will lead the next era and will come surging into the New World and bring Kaido down.

The Samurai decided to fight now because twenty years would be too long for them. She knew they would be killed if they broke out, but they thought it was better than rotting in the dark. Their sacrifices gave Yamato a reason to fight against Kaido, as she has people who have believed in her, and therefore she promises to return freedom to the Land of Wano.

The next episode will show Luffy and Momo finally flying to Onigashima, with Momo still struggling with his fear of heights and Luffy constantly pushing him. Finally, we can see they are off the ground, and Luffy is somehow holding on and enjoying himself at the same time.

But it seems like there’s going to be a crash landing in the castle as Momo closes his eyes in fear and they both scream to death. But once they reach there, we can expect Momonosuke and Kaido in one frame with their dragon forms.

Of course, Luffy will assist Yamato in fighting Kaido, but before she does so, she strikes Kaido on the head, which we can bet injured him in some way. Yamato is far more powerful in her hybrid form, and she is determined to free the land and not let the samurai’s sacrifice go to waste.

So the battle in Onigashima will continue in the next episode, as well as the fact that the fight is already intense and Yamato has not given up yet, but she is not enough to defeat Kaido. However, the damage that she has done is enough to help Luffy take over any time soon.

One Piece Episode 1049: Where to Watch

You can catch up with all episodes of One Piece on Crunchyroll and Funimation as well, but with a few hours’ delay. The worldwide fans will get English subtitles for the show, so do not miss the upcoming episode and stream accordingly at the above-mentioned time.

Also Read: Top 10 Best Things That Ever Happened In One Piece