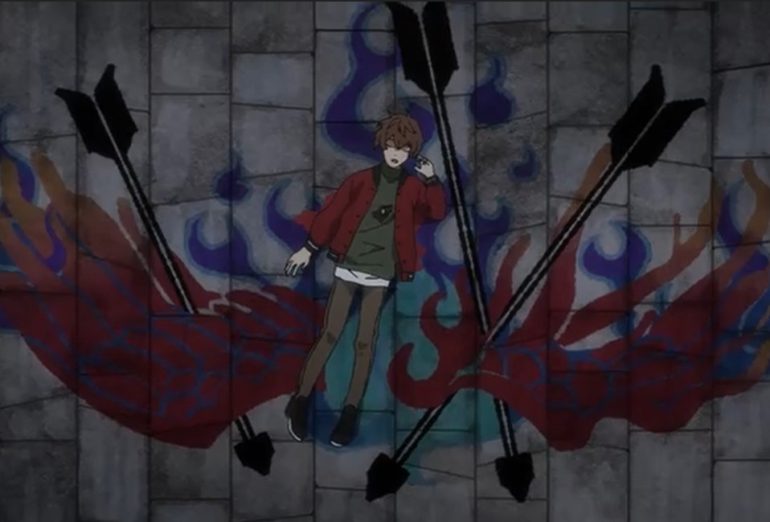 Matoko is being chased by a gang that wanted to kill him. He manages to escape from them and hide nearby. He witnesses the Red Angel clashing with the fans, and he took that as a chance for him to escape. He wondered why they were chasing him ever since yesterday since he was friends with the G-Boys crew. While he is running on the other side, King is shown lying on the ground with blood covering his body.

Earlier, the Gang that is clashing with Red Angels said that the street belongs to them. Makoto came back and told the bosses from all the gangs to stop fighting. They spray each other with gas, and all of them started coughing. It has been revealed that the gang is the G-Boys that are fighting with the Red Angels. The boundary between the groups’ turf is Sunshine Street. This boils down to a border dispute, and Matoka went with the Red Angel to the leader Kyouichi Ozaki.

Ikebukuro West Gate Park Episode 12 will be released on Tuesday, 22 December 2020, at 9:00 PM JST. This Anime will release its latest new episode every Tuesday. This post may contain spoilers for the upcoming episode. Watch out when you proceed.  Watch this Anime officially on Funimation. Let’s take a look at the updates below.

Tomomi reveals that the Red Angel has been making chaos at a cafe where the G-Boys have been hanging out. The third guy comments that some G-Boys got all attitudinal about it. Kyouichi laughs at them, and Tomomi said it is no laughing matter. Makoto suggests that Kyouchi must try to be a guy who has to mediate things every time. Kyouichi comments that his family has been told not to go starting anything, but they will fight back if they are attacked.

If not, they won’t be able to protect their comrades.  Kyouichi tells Makoto that he doesn’t want to cause trouble for his mom, but he will try to talk to King. Makoto informs his boss King, and he agrees to meet with them for territorial negotiation. Makoto said that it is about who’s turf ends where and where’s the neutral zone.  Makoto said that there is no reason for dispute in a big town like this.

King said it is fine; they will work things out somehow, and Makoto tells Kyouichi that they will meet tomorrow night at 7:00. At a suite at the Sunshine Hotel and Kyouchi tells the to relax he will fix everything. He adds that they must not get involved in a fight before he meets with King. The third guy comments that they can trust the G-Boys. What if they launch a sneak attack, and the fourth one comments that G-Boys plays it dirty.

Makoto said that guy is fired up, and Tomomi reveals that he is their number 3 Shigeyuki Utsumi. Kyouichi said that he also doesn’t trust the G-Boys, and he doesn’t think of King as a friend. He asks Makoto if he can’t say they are a lot of hotheads in the G-Boys. Makoto guarantees that he will be there for talks; they must no worry about anything. They won’t be in danger, and he promises them; Tomomi tells everyone that they can trust Makoto to handle the matter.

The Red Angels agree, and Makoto went to ask Mitsuki about his leg. Mitsuki replies that it is all better now, and the other guy wanted to tell Makoto something important. The number 3 Shigeyuki Utsumi looks at that guy, and he got scared. The guy then tells Makota that it is nothing that surprises Makota. Later an older man who was drinking beer finds the guy who wanted to tell Makota something killed on the road.

Later Makoto gets to know about it and goes to watch the news. It has been revealed that the guy is Kazumasa Watanabe, who is 19 years old. He was found late last night in an East Ikebukuro park stabbed through the heart with a knife. Makota realizes that Wantanabe is the guy that wanted to tell him something important. Makoto went to investigate the matter, and he finds Kyouichi angry.

Kyouichi said Wantanabe was a good boy and asked if it is this how the G-B0ys do things.  Shigeyuki Utsumi said that he knew, and he has already told everyone not to trust the G-Boys. Kyouichi shed tears and said they would make them pay for Wanatabe’s blood. Shigeyuki shows Makoto as a symbol of the G-Boys to prove that it is the G-Boys who have committed the murder.

Kyouichi told Makoto to either be on his side or against them; later, Mitsuki shows up and shoot King with 24 bullets on his chest. Makoto was there, and he couldn’t save King, and they frame him that he is the one who shot King. Makoto got chased by the police, and he manages to escape. But King is alive in a coma while Makota’s police friend is trying to figure out what has happened.

That’s how we end this upcoming Episode Finale with all of the above updates.