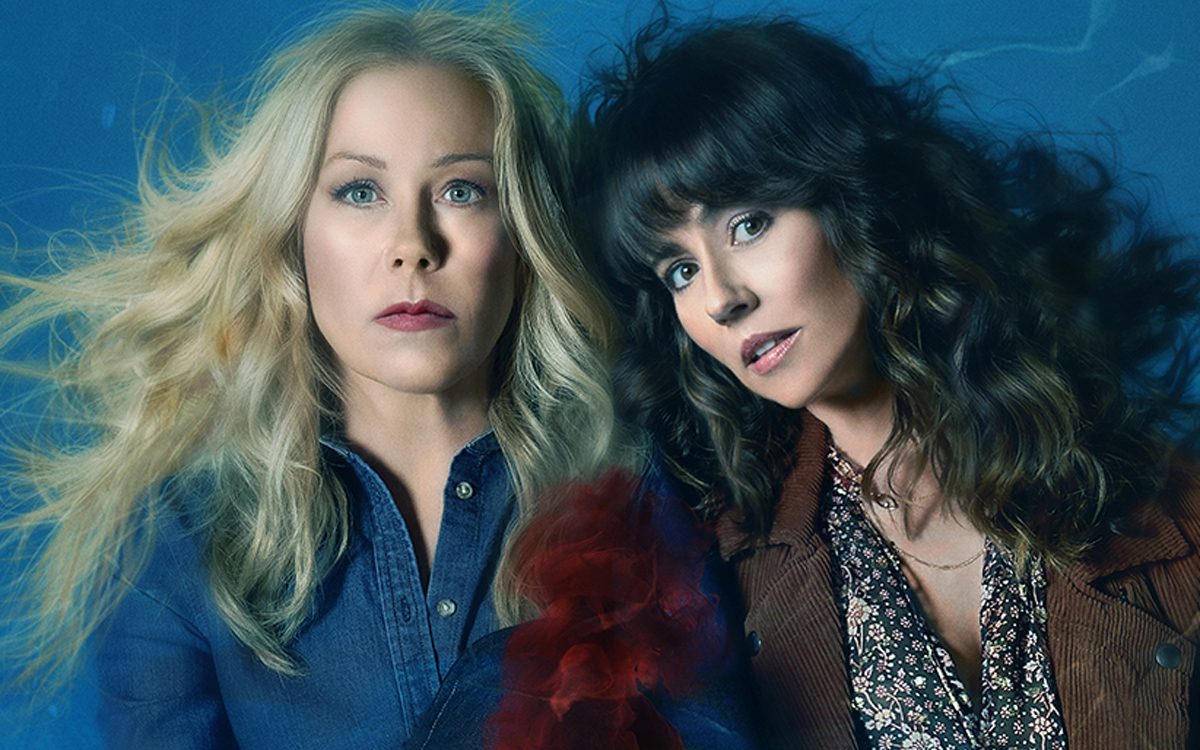 Dead To Me Season 3: Everything You Need to Know!

Dead to me Season 3 is the third & upcoming season of the Netflix original series. It’s a dark comedy starring Christina Applegate and Linda Cardellini. The story revolves around two women who meet coincidentally but their fates start to align. After two successful seasons, Dead To Me is coming with a third! Fans of the show are pumped for another season of mystery, tragedy, and laughter. But more so for the chemistry between Applegate and Cardellini that sets the screen on fire!

The story starts with Jen who losses her husband in a hit-and-run case. Judy also goes through a similar loss but she handles it quite differently. The former becomes a psychotic widow while the latter is optimistic and free-spirited. Despite being totally different the two hit it off. But there’s more to the story than meets the eye. With many twists, turns, and jokes along with phenomenal acting, this series is quite unique. So, if you are finding a new show to binge, this could be it!

Everything That’s Happened On The Show So Far…

The first season begins with both Jen and Judy coping with grief. Jen’s husband Ted is killed by a hit-and-run and she is hell-bent on finding out who did it. Then there is Judy who is grieving her fiance, Steve, who is later revealed to be alive and well. Jen takes the help of a support group for her PTSD, and that’s where she meets Judy. The two don’t like each other from the get-go because of their contrasting personalities. But gradually something connects them and they become inseparable.

Meanwhile, Jen is checking every dented car in search of her husband’s murders. But she has no clue that the culprit is her closest friend. Yes, it was Judy and Steve who accidentally kill Ted and Judy knew about it all this time. Here on, the story works parallelly. On one hand, Jen is getting closer & closer to the culprits. And on the other Judy is doing her best to not get caught. A ton of lying and guilt trips later, Judy confesses and obviously, Jen loses it. However, she does take her revenge by killing Steve. Now was that intentional or self-defense? It’s still not clear. 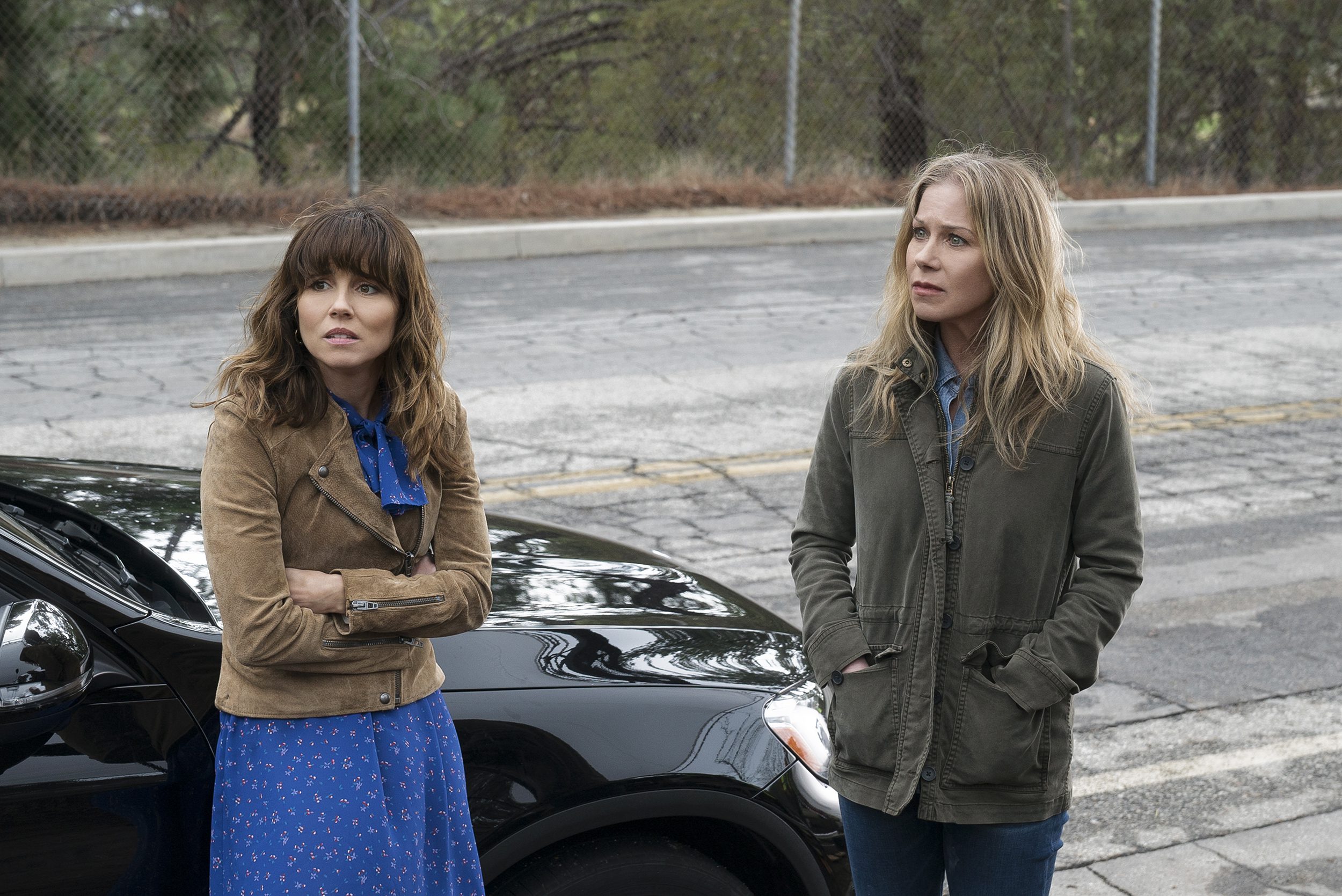 Dead To Me starring Christina Applegate and Linda Cardellini

Season 2 picks up from the morning after the murder. Both Jen & Judy having killed each other’s husbands (ironic) are frantically cooking breakfast. It’s both tragic and hilarious at the same time! Detective Ana Perez is on the lookout for Steve after his disappearance. So, this season follows J&J as they try to hide that Steve is dead/ killed. It gets messier and crazier but those two stuck together. It is revealed that Steve tries to strangle Jen and she kills him in self-defense.

In the end, everything seems to be back to normal. Jen is finally over the trauma of grief and guilt and that’s when another car accident shakes up her life. On the other hand, Jen’s son finds out that it was Judy who killed his dad in a car crash. With so many loose ends hanging, Dead To Me Season 3 is going to be a rollercoaster ride

Dead To Me Season 3 Release Date – Everything we know!

Ironically the last episode of season 2 is titled ‘where we go from here?’ and that sums up the feels. There is no way the creators would leave the fans hanging so season 3 is definitely coming. Although there is no official release date out yet, it is likely to release during Fall 2022. So, the third season is coming this year!

All good things come to an end, and so does this show. Season 3 is going to be the final season of the series and it’s bittersweet. But the creators and actors have no complaints. The show was initially meant to be one just 1 season, it was fan love that pushed it to 2 and 3. More than anything, the makers want to give a good ending to Jen and Judy. Talking about season 3 being the last season, creator Liz Fieldman says, “It’s just something that came to me organically, and I tend to try to follow the gut feelings I have.”

What To Expect From Dead To Me Season 3

The third and final season has lots of drama up its sleeves. Steve’s brother and Jen’s love interest in season two, is going to be a big deal in the third season. Since Ben crashes Jen’s car in a drunk state after a mysterious call, he obviously looked messed up. Apparently, he now knows every single secret from the first and second seasons. So, that means he knows Jen kills Steve and Steve was involved in a hit-and-run and so on. That not only puts his relationship with Jen in danger but also bodes a threat to both Jen and Judy.

In each season of the series, there is some untold truth. Whether it was Judy hiding the truth about killing Ted or Jen trying to escape the investigation of Steve’s murder. The makers promise to follow a similar premise, but this time neither Jen nor Judy, it’s Ben hiding the secret. Liz Feldman says this show continues to explore “constant give and take of, Do you tell somebody something if you know it will hurt them?” 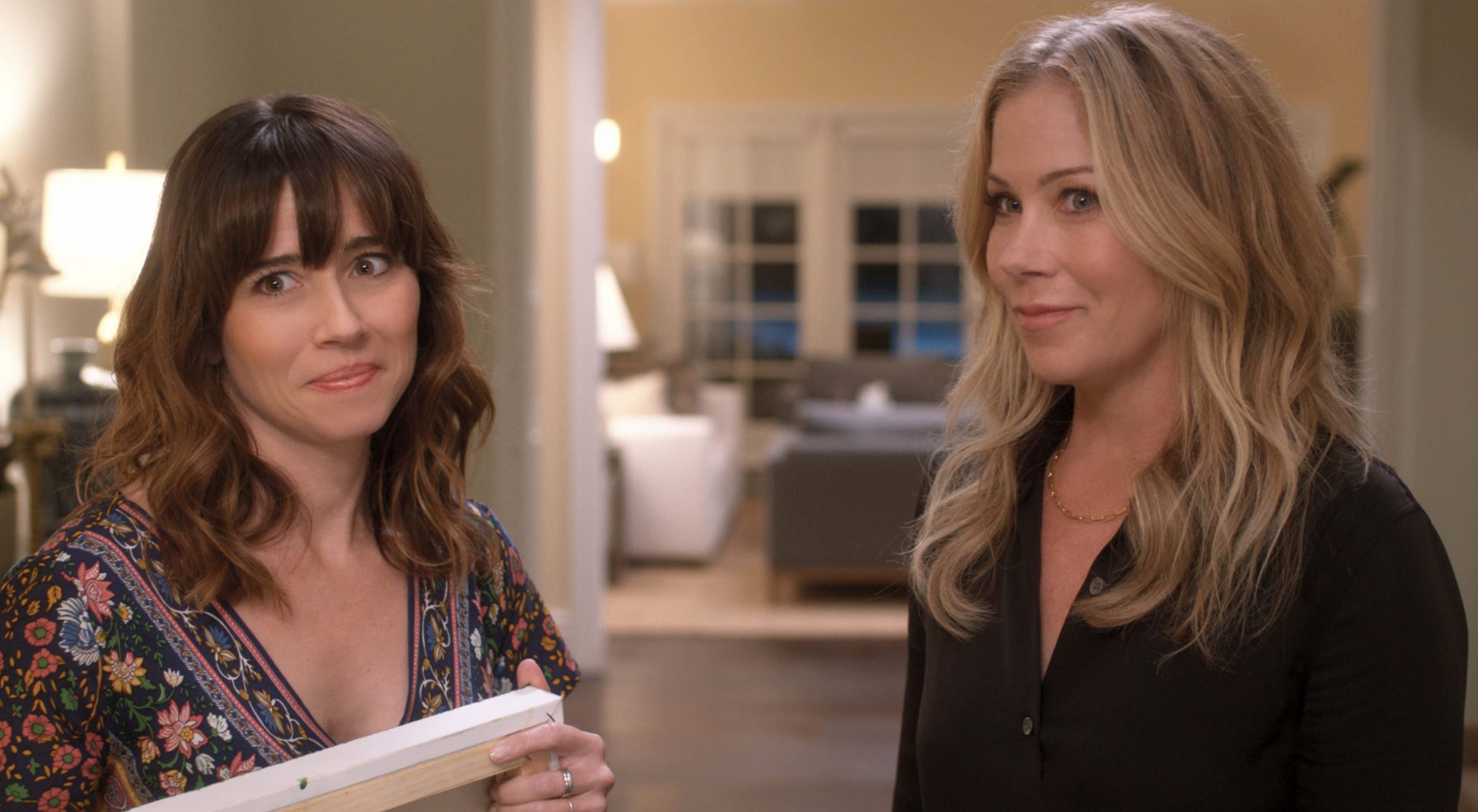 This season Ben faces this dilemma! Although speaking the truth might have bad consequences for Jen, it is the right thing to do. There is a possibility that Ben opposes what Jen and Judy are doing. And the entire season we might see J&J finding leverage over Ben so he doesn’t spill their truths. Although detective Ana Parez lets Jen go because she kills Steve in self-defense, the evidence against her is piling up. What if Jen gets caught and taken to jail? Seems less likely but surely possible!

There’s also Jen’s son, who now knows about Judy’s big secret. He disliked Judy from the beginning but towards the end of season 2, he somewhat accepted her. What will happen now that he knows that she is the one to kill his dad!? A lot of drama and confrontation. But since this show is also hilarious, it will find those moments even in the hardest times. Another interesting plot that can be explored in season 3 is Steve’s possible ties with the mafia world. At the end of season 2, Jen and Judy find stacks of cash from the back of his paintings. Although that solves their problems at the moment, it can cause much bigger problems too.

The Cast of Dead To Me 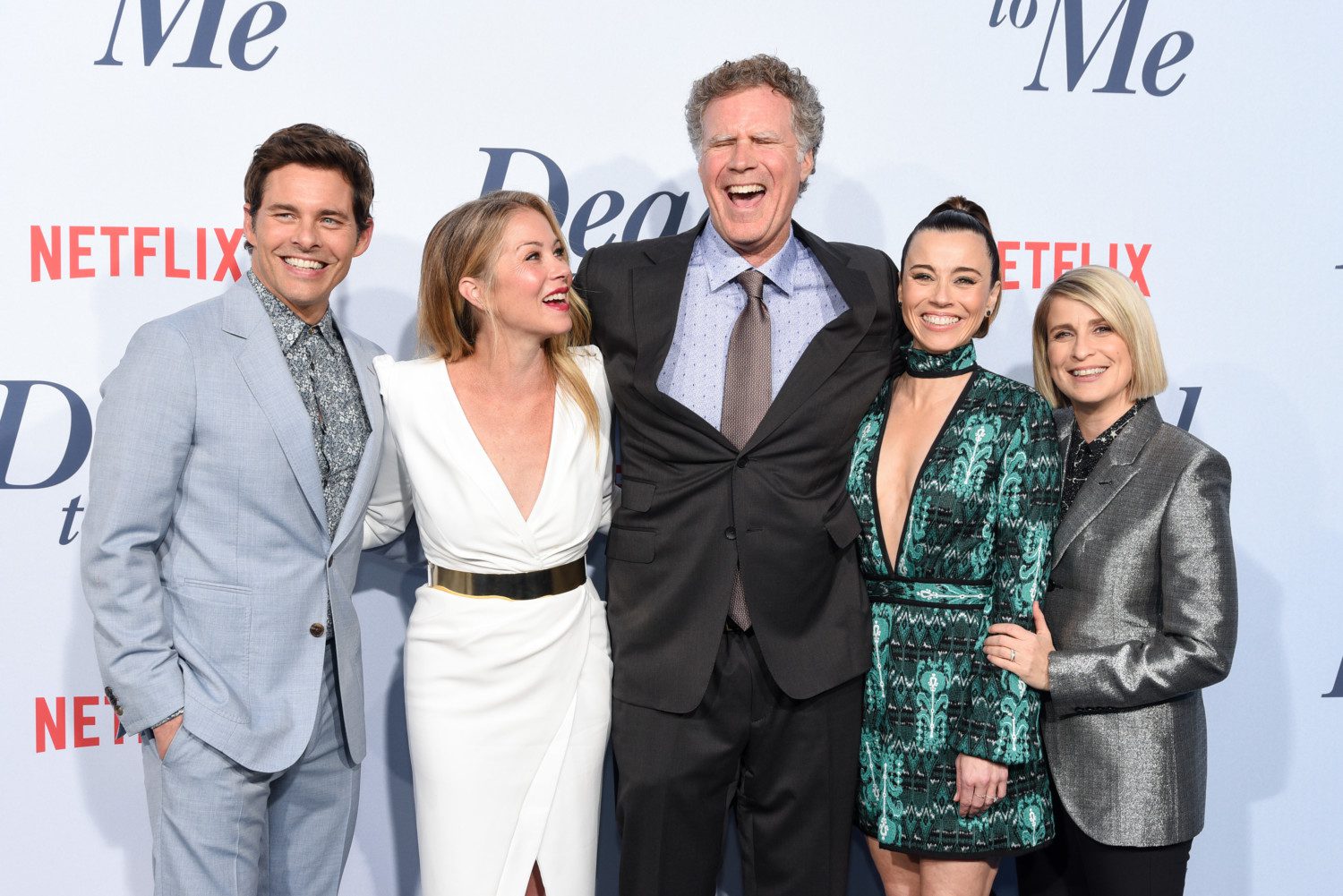 The Cast of Dead To Me at the Premiere

Who among the cast is going to be on Dead To Me Season 3?

Although Jen and Judy end up in a car crash, some behind the scene clearly reveal that they are unharmed. So, Christina and Linda are definitely coming back as Jen and Judy respectively. How could they not? the entire show is about them. Well, another continuity on the show is Ben. He is already wrapped up in the mess with Jen and Judy, so he has to be there. Plus the end of season 2 leaves Ben’s character arc in a question mark. So, James Marsden will be reprising the role of Ben in the new season as well.

The ones missing from the show are going to be Steve, Ted, etc. But since Steve and Ben are played by the same actor, he won’t be missed. Jen’s children are also going to be in season 3 and Charlie has an interesting story arc to go ahead with. The new additions to the show like Diana Maria, Nick Prager, and Jerry Burns will return as Detectives Perez and Brandon Scott, and Police Haward Hasting respectively.

Stay tuned for more information about the upcoming season!

Also, Read – What Is Anthony Anderson’s Net Worth? The Actor Bids Farewell To Law And Order Season 22!