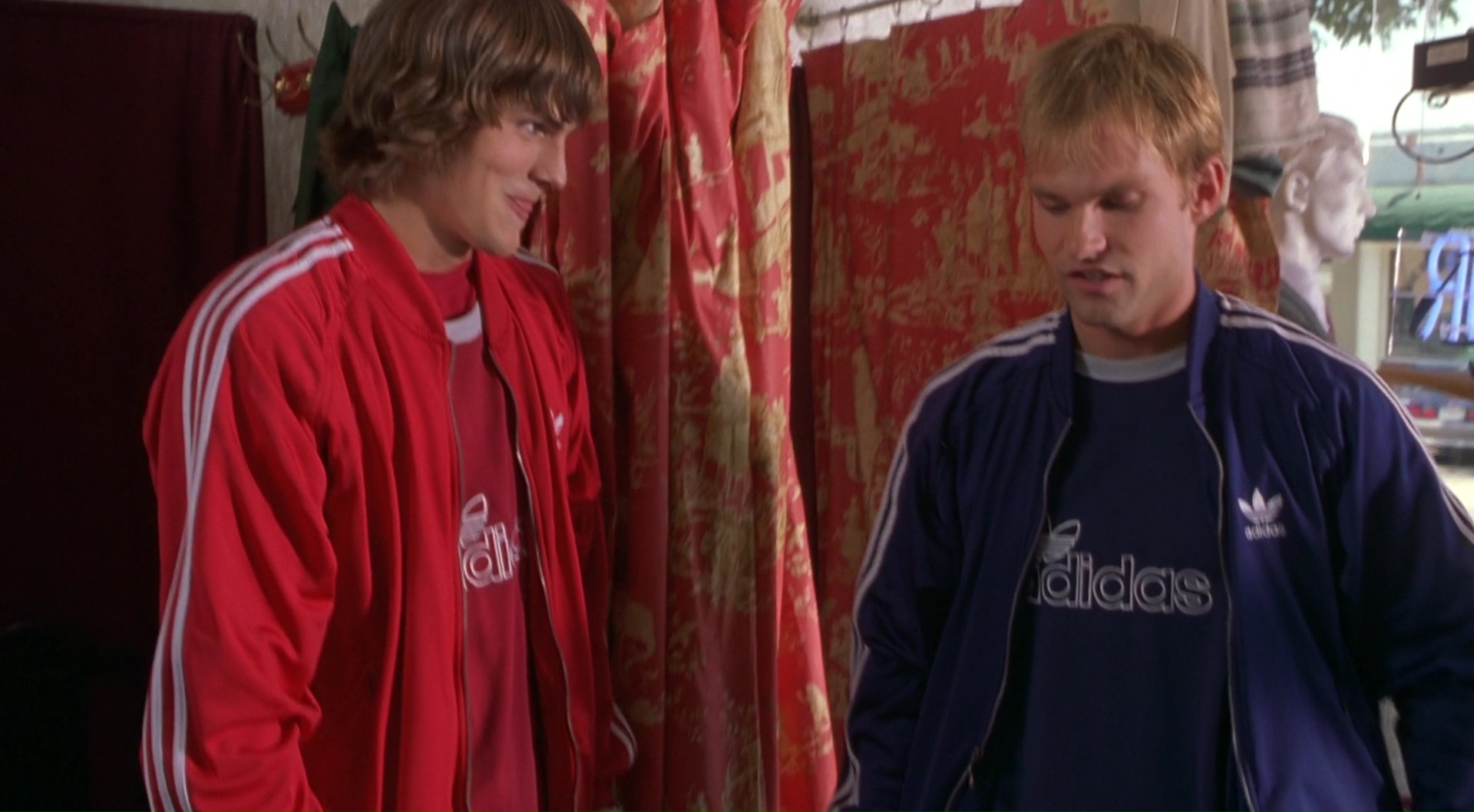 The audience loves stoner films for a variety of reasons. Their popularity can be attributed to their hilarious nature, the inherent way they seem to make their audience laugh or a nod in acknowledgment, or just the unique way each filmmaking reflects the direction the plotline takes.

If you are looking to know what exactly a stoner flick constitutes of, we are here to tell you just that. These are a genre of films that have stemmed off of comedy. They usually involve the use of recreational cannabis in some form or the other, and this eventually leads to chaos – hilarious chaos, at that. These films are great to watch when you are in the mood for a good laugh. They usually show the leads goofing off and will instantly put you in a great mood.

Now that you know what these films are, it is only natural that you are curious enough to watch a couple of them. We’ve got that base covered too! Here is a list of seven stoner flicks that might be the entertainment you are looking for at this point. Read on and get ready to have a laughing fit of your own! 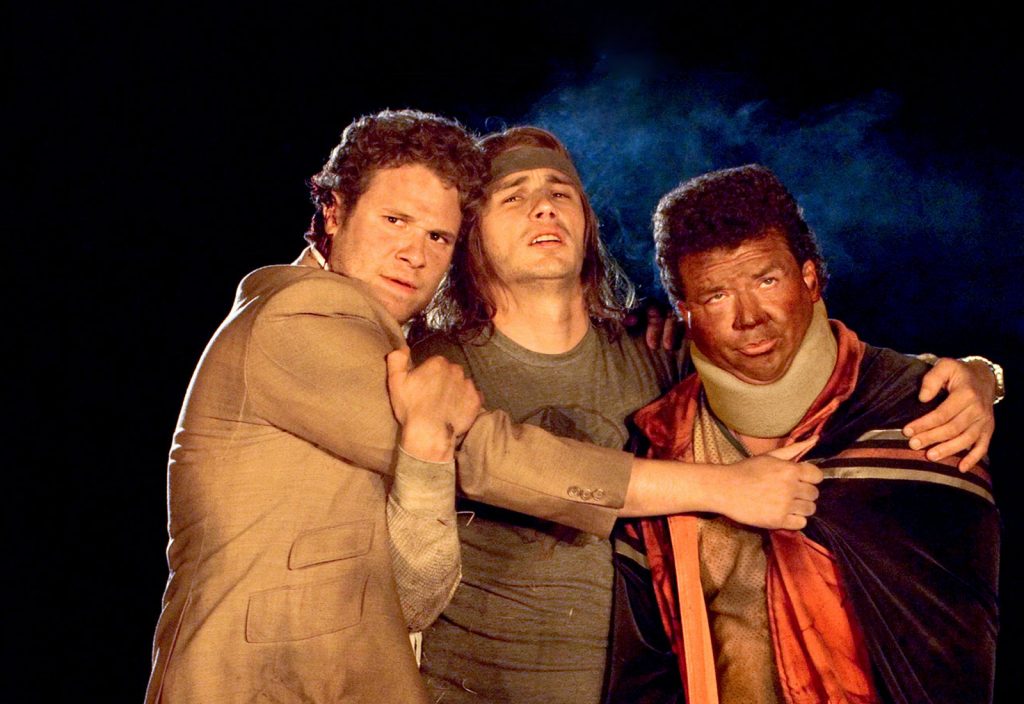 This is one stoner flick that everyone’s heard of. What is a film of this kind without Seth Rogen? The movie premiered in 2008 and was directed by David Gordon Green. Rogen and Evan Goldberg wrote the screenplay. This film is chaos at its finest. Everything goes wrong, and then the end credits roll. Don’t believe us? Watch the film, and you will know what we’re talking about. The movie features Seth Rogen and James Franco in the lead roles of Dale Denton and Saul Silver. Needless to say, the duo has delivered a stellar performance.

The plot of Pineapple Express follows the story of Dale and Saul. Dale is a weed-loving Dale process server, and Saul is his personal drug dealer. Things go downhill for the two of them when Dale witnesses a murder and accidentally gets Saul involved in the mess. They should now run from the murderous drug lord and their crew if they plan on making it out alive. The movie will make you laugh and can be watched when the Monday blues kick in. 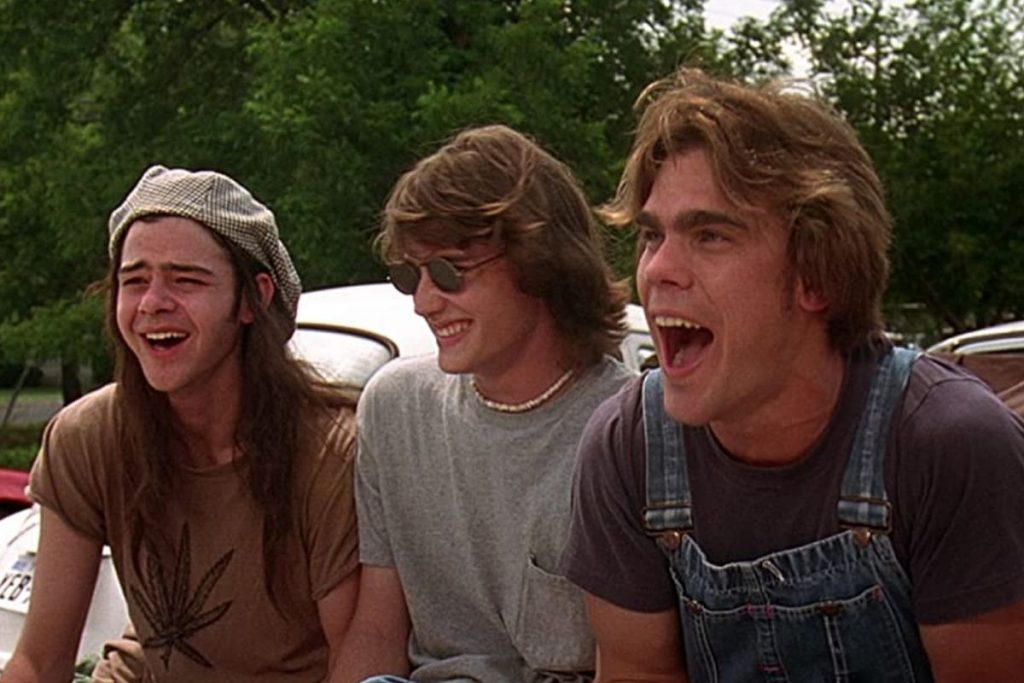 The title of this film says it all. This is an Indie film that premiered in 1993 and features some of the most popular faces in the industry today. It was directed by Richard Linklater and is one of those films that you can rewatch many times and not get bored with. Dazed and Confused has the following actors playing lead roles:

The plot of the film is set in Texan in the 1970s. Things pace up when a group of teens decides to celebrate the last day of high school by doing a bunch of wild stuff like throwing a pool party, hazing first-year students, and experimenting with drugs. Before we know it, almost all of the characters are in some soup or another – all of which lead to hilarious results. The movie is easy to follow, given the kind of plot involved, and can be enjoyed by anyone, let alone fans of stoner flicks. 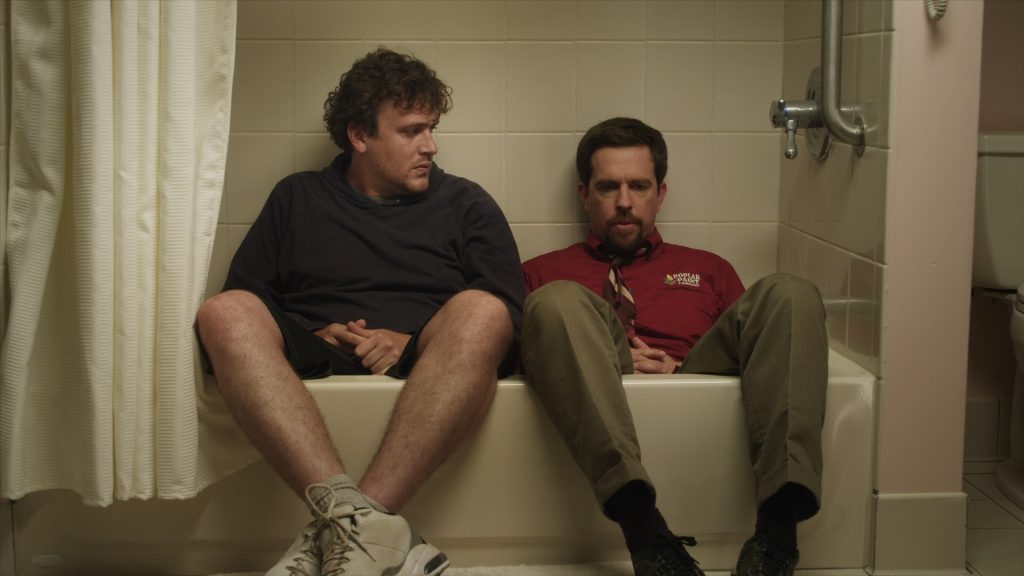 Jeff, Who Lives at Home

You already know this film is hilarious just by taking a close look at the people involved. Jeff, Who Lives at Home is a 2011 comedy-drama. It was directed by Mark Duplass and Jay Duplass – who has also written the film’s screenplay. The movie features popular actors like Jason Segel, Ed Helms, and Susan Sarandon in the lead roles. The cast complements each other, and their performance lets the plot shine through.

The plotline of this film revolves around the title character Jeff. He is a 30-year-old unemployed man who is looking for a start to get his life together. This sign comes to him in the shape of a wrong number one day. This leads to a series of serendipitous events that help him understand just what is missing from the equation. The movie is both funny and heartfelt – a combination that we don’t get to see often. 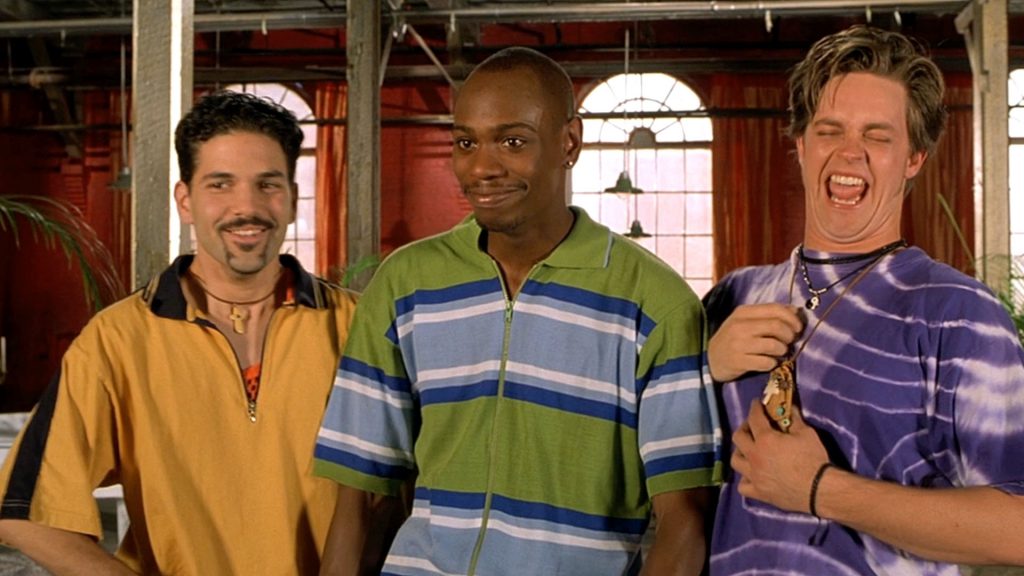 This film is extremely colorful, but this aesthetic does not take anything away from its essence. In fact, it only adds a great deal to it. This is a 1998 stoner flick that is underrated by our standards. We are here to change just that. Tamra Davis directed the movie with a screenplay by Dave Chappelle and Neal Brennan. Half Baked sees Dave Chappelle, Jim Breuer, and other popular faces in the lead.

This movie’s storyline kicks off when a person gets accused of killing a New York City police horse. It is now the duty of his three stoner friends to figure out a way to bail him out. To do this, they decide to sell a bunch of pot that they stole from a pharmaceutical lab. The rest of the film follows the trio as they try to do this without landing themselves in grave danger. This is a great film to watch with friends and have a good time giggling all the way through. 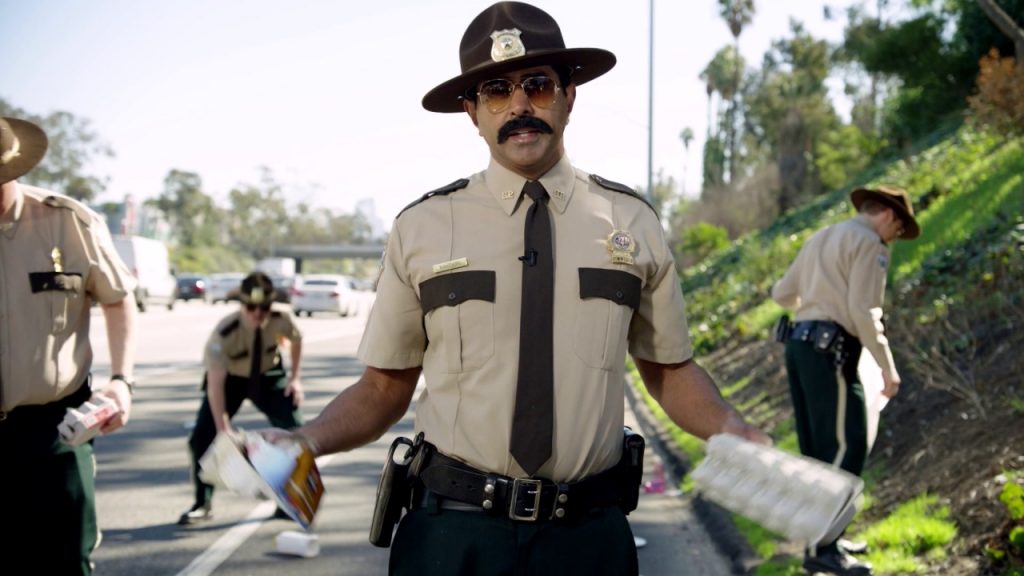 This film came out in 2001, and like many other stoner flicks, this also deals with crime. Super Troopers was directed by Jay Chandrasekhar and is quite popular among fans of this genre. The movie features the comedy group Broke Lizard in the lead, which consists of Jay Chandrasekhar himself, along with Kevin Heffernan, Steve Lemme, Paul Soter, and Erik Stolhanske.

The plot of this movie deals with a group of five state troopers from Vermont. They love pranking people and getting into deep trouble. While this is all fun and games, it might also cost them their jobs. To avoid this, they plan to outsmart police officials by solving a crime that has baffled them for quite a while now. 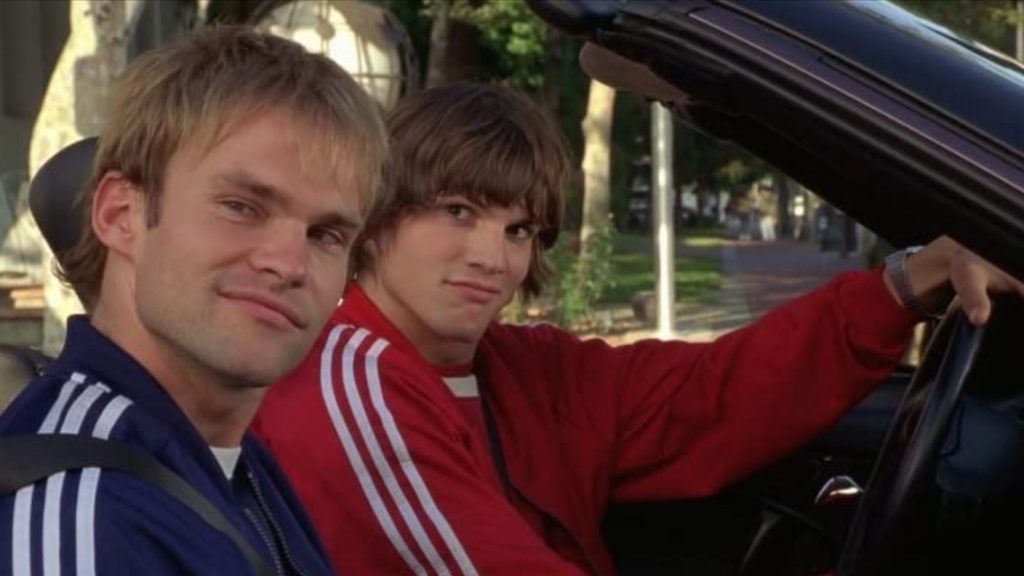 If you are familiar with this genre, you would already know that this film right here is a classic. Dude, Where’s My Car is a 2000 film that is so popular that it is only second to Pineapple Express. The movie was directed by Danny Leiner, with Philip Stark having written the screenplay. It stars Ashton Kutcher and Seann William Scott in the lead.

This plot is one for the comedy lovers out there. The storyline kicks off when Jesse and Chester wake up one day, not knowing what happened last night and, more importantly – where their car is. To figure this out, they try to retrace their steps and meet some fascinating personalities along the way. The movie is outright hilarious and is sure to make even the toughest critic smile a little. If this sounds like something you might enjoy, then go right ahead and watch this film. You will not be disappointed! 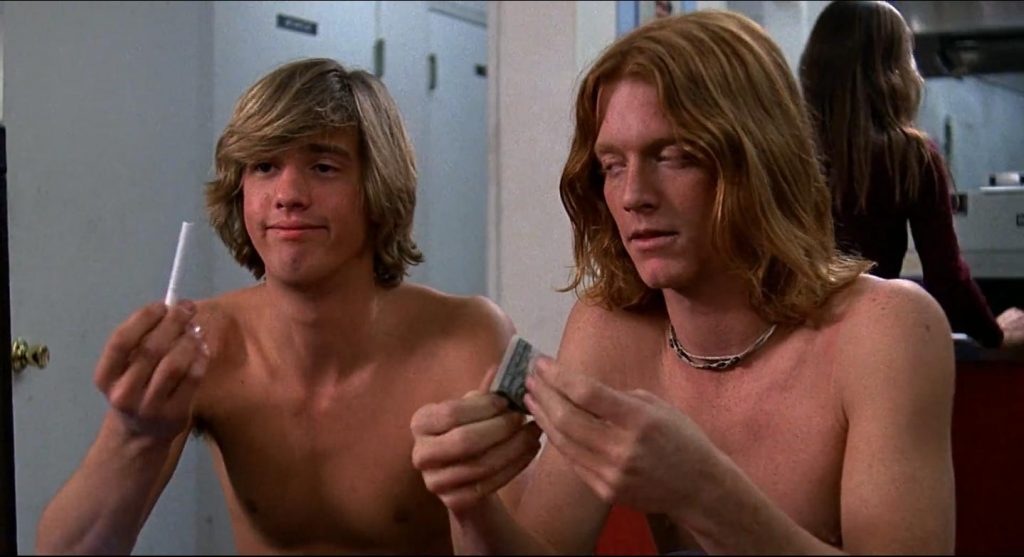 This is one film that’s funny at every turn. This is probably one of the oldest films in the modern notion of the genre, coming out in 1982. It is also probably one of the very few films that do justice to the term “stoner flick.” This is a romantic comedy directed by Amy Heckerling. It is based on a book of the same name by Cameron Crowe. It features Sean Penn, Jennifer Jason Leigh, Judge Reinhold, Robert Romanus, and many other popular stars in lead roles.

The story is set against the backdrop of Ridgemont High. The movie follows high school student Stacy Hamilton who is a newbie in the dating world. Wanting to come out of her box, she takes the advice of her “wild” friend Linda Barrett. This leads to some serious complications as Stacy finds herself in the middle of a love triangle, a nice guy called Mark Ratne r and a not-so-nice boy called Mike Damone. While she tries to smooth things out, another student Jeff Spicoli, finds himself go head on head against teacher Mr. Hand while in a stoned stupor. With this film, you can rest assured that there is never a dull moment!