That one personality who has made up his empire by his zeal and enthusiasm is Damien Steven Hirst, popularly known as Damien Hirst. He is an entrepreneur and a prominent member of Young British Artists. Hirst was born on 7th June 1965 in Bristol, England. During a conversation, he expressed that he never gets the opportunity to confront his father as his mother moved out with him when he was 2 years old. However, as a father, he has only glimpsed his stepfather.

Nonetheless, Hirst’s mother had conveyed that since childhood, he never obeyed her or tried to support her. He was behind the bar almost twice because of his illegal deeds. But Hirst’s attitude and gestures changed whenever he grabbed his painting brushes and tried to incorporate his thoughts on the canvas.

Since childhood, Hirst has had to face several ups and downs in his life. Even with having issues with his mother, Hirst had to face rejection after he put forward his desire to attend Jacob Kramer College. But later, he gained the opportunity to be a part of that institute as a Foundation Diploma course student. However, after a long gap, he again wished to explore more about Fine Arts, so he joined Goldsmiths College. 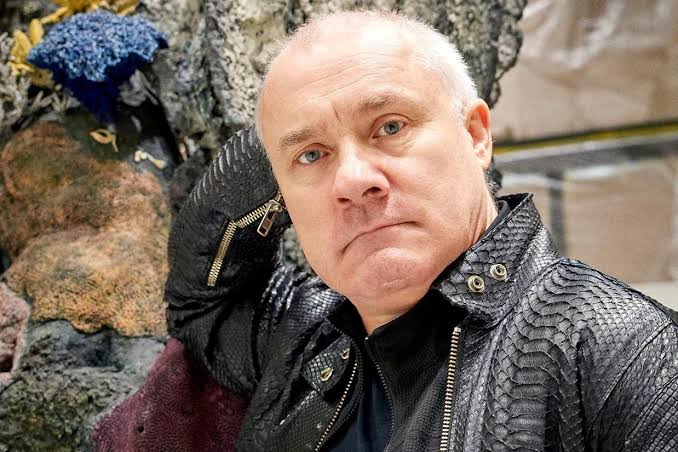 The First Stage Of Hirst’s Career

While being a part of the Goldsmiths College, Hirst stood up as the head organizer of an exhibition named Freeze. Numerous known faces from the art world gathered for that exhibition. However, London Docklands Development Corporation played a vital part in this exhibition by sponsoring the entire intuition. On the other hand, Hirst himself tried to exemplify his creation by painting a cluster of cardboard boxes with conventional household paint. After acquiring their graduation degree from Goldsmiths College, he along with his friends named Carl Freedman and Billee Sellman, established the Warehouse show. This trio emerged and put forward their innovative ideas and intentions through their creations.

What Kind Of Theme Did Damien Hirst Prefer For His Work?

Illustrating the dark shadow of death is the favorite art theme of Damien Hirst. Through his work, he always wanted to demonstrate something different and unique. As a result of which, he gave it a thought to come up with a series of artworks about an elaborate procedure of preserving dead animals. This conceptualization of him assisted him in climbing up the stairs of success with no time.

The critics, as well as the viewers, appreciated the extraordinary reflection of Damien Hirst. However, he earned recognition after he came up with his work, ” The Physical Impossibility of Death in the Mind of Someone Living”. It’s nothing but a 14-foot artwork that portrays the drenching concept of a tiger and shark. This work was displayed in a clear case. 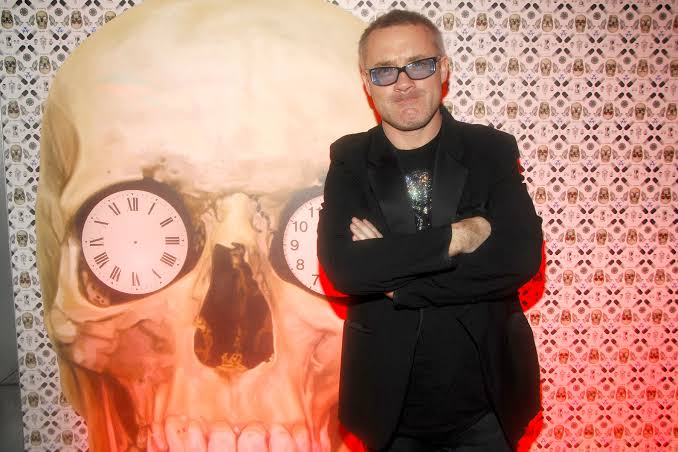 After this, Hirst featured “spin paintings”, and “spot paintings”, which are incorporated by adding random colored circles. Damien Hirst won everyone’s hearts when he auctioned his entire show named Beautiful Inside My Head Forever and raised funds of about $198 million.

In 1991 he came up as a solo artist in an exhibition called In and Out of Love, which was organized in central London. However, in 1993 his first ever international work in the Venice Biennale was presented. He illustrated a dramatic situation where a cow and a calf were cut into sections and titled Mother and Child Divided.

In 1997 Damien Hirst appeared in front of the world with his autobiography and a collection of his art books, I Want To Spend the Rest of My Life Everywhere, with Everyone, One to One, Always, Forever, Now, which has been distributed to the audience. However, his autobiography illustrates a precise version of the difficulties of his life in his childhood and how painting has worked as a blessing in disguise for him.

Some of his notable artwork are Pharmacy, Beautiful Axe, Slash, Gosh Painting, Away from the Flock, The Virgin Mother, Painting By Numbers, Spin Drawing for Women’s Equality, The Dream, and Butterfly Rainbow.

How Did The Critics Respond After Looking Into His Artwork?

Positive and negative are the two parallel sides of a coin. Likewise, human beings also face these two parallel aspects at every juncture of life. Numerous analysts appreciated Hirst after looking into his work, whereas some expressed their grudge and bitterness at the same time. Several critics like his deep thinking procedure, which has assisted Hirst in earning recognition.

He also won the title of a showman and has been comprehended the way he had always presented his work despite noticing the fact that the media and the audience around the globe had a lot of expectations from him. However, Tracey Emin had stated and requested the audience not to set any comparison between him and Damien Hirst. He continued his statement by saying that he tried to portray a different genre of artwork, whereas Hirst attempts to portray a unique and different genre of artwork that never moves back to magnify reality.

On the other hand, Virginia Bottomley had titled him “a pioneer of the British art movement”. As Hirst has often set a contrast between the animals and his paintings.

After a lot of positive reviews, it’s time to note down some negative reviews which have been obtained by Hirst after presenting his artwork. Several critics claimed that it could not be considered an artwork. However, they didn’t appreciate the way Hirst had presented the concept of a dead cow or sheep. Those analysts exclaimed that this kind of work doesn’t engage or build up the unity of the society. Rather than it plays a vital character in destroying the ethics and sentiments of society. However, an art critic named Robert Hughes clamored Hirst’s work as tacky.

According to him, this kind of piece should not be considered artwork as putting forward something dead which doesn’t convey any essence of happiness and satisfaction should not be termed as artwork. Some also claimed Hirst’s work was boring and monotonous.

Nonetheless, the reviewers asserted that Damien Hirst is a talented artist and has the capability to come out with something unique and extraordinary. But incorporating his thoughts in such death works can’t assist him in reaching a notable position. After so much criticism and mixed reviews, Damien Hirst never backed off and followed whatever he wanted to do. Awards speak way louder about what kind of artist he is.

In 1992 Hirst gained a nomination for the Turner Prize for his first ever work. However, after 3 years, in 1995, he won the Turner Prize. In 2012 he was also appointed as one of the prominent members of the British cultural icons.

From 1992 to 2012, Hirst spent his life with his girlfriend named, Maia Norman. With her, he has three kids altogether. The couple didn’t tie a knot till now, but Hirst considered her as his wife. In front of the world, he introduced her as his wife and the mother of her kids. 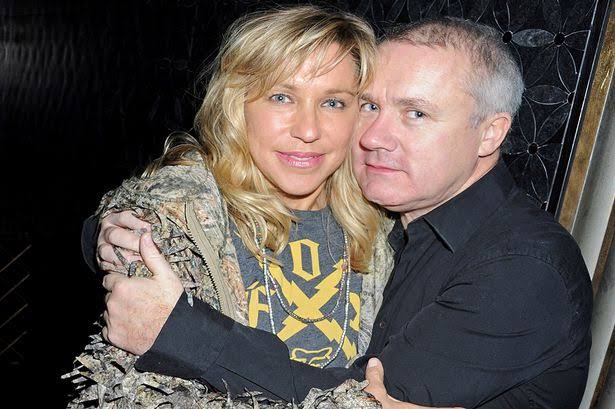 Damien Hirst And His Wife

Despite having a perfect family, power, and money as well, Hirst stepped down into the darkness. He never faces any downfall or rejection when it comes to his work and presentation. But still, he had been trapped in a serious drug and alcohol addiction. During this period, his fans and loved ones confront a new version of Hirst with wild behavior and full of bitterness with several unethical activities.

Hirst had donated an ample amount of money to help society. The amount of sum he used to earn from his works, like Beautiful Love Survival, at the Sotheby’s London sale, Beautiful Inside My Head Forever, has been donated by him to the organization named Survival International. On the other hand, he also contributed to the people fighting against hepatitis C after organizing a private auction of Art on a Postcard. 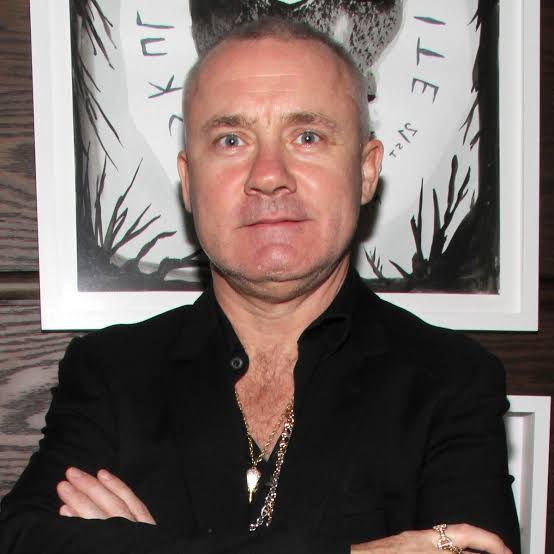 Net Worth Of Damien Hirst

According to sources, Damien Hirst is considered the richest living man globally. He almost acquires a net worth of 384 million dollars at present days.

Hopefully, the above-illustrated segments of the blog will be enough for the readers to establish a clear vision of who Damien Hirst is. Along with this, the entire content also put forward every aspect of his life. Along with what kind of statements he had to face after holding his artwork. His successful journey can also be considered an inspirational one. It’s really commendable the way Damien Hirst has uplifted him to reach the peak of success.