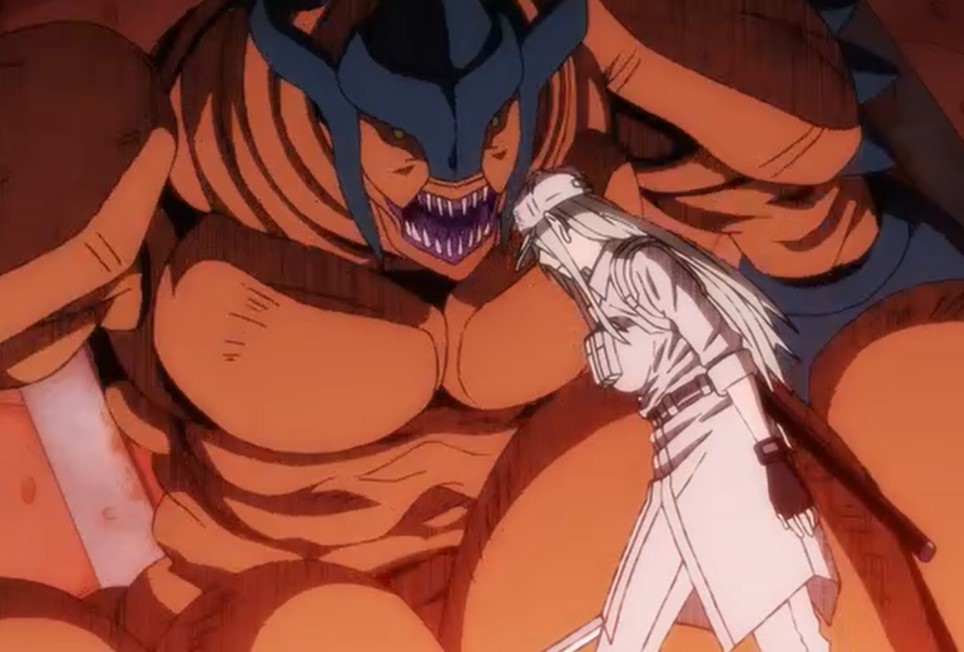 AA is getting orders from his trainer about where he has to deliver oxygen for his next deliveries. AA is surprised that on his second day of work, he has been given so many deliveries. His boss yells at him if he has a problem with it, and it is a light load for a rookie like him. AA agrees, and the boss warns him to get the receipts stamped in whatever he does. When he moves forward, he saw AC being taunt for being slower with his delivery.

The guy asks AC how he will deliver the oxygen since he has not finished half of his quota yet. He gave AC another pile of work and tells him to prove that he is not slacking off. AA confronts AC and tells him that he is not the only one who is having hard times. The two parted ways, and on his way, AA met with a beautiful lady named Microphage. When he wanted to praise his beauty, he is surprised that her dress is covered with blood.

Cells at Work Code Black Episode 3 will be released on Tuesday, 19 January 2021, at 1:40 AM JST. You can get more updates about this anime on the official website at saibou-black.com. You can also enjoy watching this Anime on AnimeLab and Funimation. Note that this anime has changed its weekly release to a Tuesday release. Take a look at the updates below.

AA looks at Microphage and sees that she is dragging a five-headed demon bacteria that will be disposed of. It has been revealed that Macrophage is a type of White Blood Cell. She catches and kills foreign substances like bacteria while determining antigens and information about immune responses. AA is just surprised that such a pretty lady is making all the killing. She just passed him without noticing, and he tripped.

Microphage almost stabs AA, thinking that it was another prayer that wants to attack her. She apologizes after realizing that it is AA. She left AA to complete her work, and AA realizes that she works hard just like him. AA makes his second delivery to the Mucosal Cell in the oral cavity. When he entered the room, the soldiers inside were in flames. He asks one to put a stamp on his receipt.

Due to fear, he accidentally lost the receipt, and he saw it burning, but he manages to stop the flames. One of the soldiers tells him that he must run away since the mouth ulcer ruptured. If he stays, they will soon be invaded by bacteria, and suddenly, the pink demon bacteria appear. It killed the soldier with one feet stomp, and the blood sprays all over the room. AA is just scared sitting at the corner since he has never witnessed something like that.

The arm of bacteria started to invade the Oral Cavity room and corned AA. When they want to devour AA, the trio shows up; it is the White Blood Cell samurai girls and saves AA. They took down the army of bacteria with a single slash, and AA remembers one of them. He thanks them for saving him, and U-1196 realizes that he has met with AA and save him before. The other two started to comment on how AA looks.

One of the bacteria regenerated, and the trio went and ate it alive. When they have finished, U-1196 gave AA his oxygen back. She tells him not to lose it even if it kill him, and he agrees. Suddenly, the Oral Cavity room started being engulfed by the water and povidone-iodine from the damaged area. It has been revealed that it is called gargling. It helps wash away bacteria and viruses in the month, preventing respiratory tract inflammation.

Everything got cleaned after the gargling process, and the cell inside the Oral Cavity room has managed to survived and not get washed away. The trio left AA to deliver oxygen, and one of them advises him to build up his body. AA started to fall for U-1196, and the other two noticed it. The two try to tease U-1196 about AA, and she tries to act tough. Later the Red Blood Cell gathers in the passage with worries that they are too tired.

AA reveals that he almost got killed three times, and AC is worried that they are working day and night with no break. The old geezer cells show up and ask if they are okay, and he told them that it will rain. AA asks what is this when the rain starts pouring, and the geezer reveals that it is alcohol. Every cell inside the body got intoxicated and started blabbering nonsense. Later they met with a Liver cell who show them how alcohol is dangerous to the body.

More upcoming updates will be added after episode 3 has been released. You can also try another recent development here: Cells at Work Code Black Episode 2. See you when the new episode releases; that is what we have for you this week.