From the creators of Rick and Morty, comes another exhilarating, people-in-the-wall kind of show named Solar Opposites. Already sanctioned for season 2, Solar Opposites will be coming on Hulu pretty damn soon. The series is created by Justin Roiland and Mike McMahan and is similar to that of Adult Swim’s Rick and Morty in blue-green and weird sci-fi hijinks ways. But it stands on its own, as an independent show that has nothing to do with another sci-fi themed show. Other than having Roiland as the creator, Rick and Morty and Solar Opposites have varied differences.

We are so pleased to review season 1 of Solar Opposites for you, especially after we have done a back-to-back marathon of each and every episode. An eight-episodic show, it dropped all its episodes on the same day, May 8, 2020, on Hulu. The decision was carefully curated by the Show makers, in contrast to Rick and Morty that dropped one episode per week. Hulu planned on ordering two seasons of Solar Opposites in August 2018, it was decided that the show would run for two years.

As of today, the first season is available on Hulu, which has eight 22-minute episodes. What we can also confirm is that Solar Opposites, season 2 will have the same number of episodes and will stick to the same format. It is not known when season 2 will debut. Hulu may have ordered a second batch of episodes, marketed as season 2 but the schedule remains unknown. Most of the adult comedies on Hulu arrive on a yearly basis. Many of you think that Solar Opposites may get a second season by the end of this year only. We’re afraid we’ll have to wait on an official word on that. Producer/writer Josh Bycel has made it clear that the scripts are written and ready to be sent to homes of animators with computers.

So, what do we have to say about the debut season of Solar Opposites? First, we are glad it’s getting a second run. There’s so much we are expecting in season 2, we’ll talk about it later. Let’s start with picking on the season.

For those of you who haven’t seen the series yet, Solar Opposites is about a family of two asexual aliens who along with their replicant kids, crash-land on earth. They are forced to do so in the event of their planet Schlorp’s destruction. It’s been a year since they first arrived on Earth. While things don’t generally look good for them, owing to their hijinks and sci-fi mishaps, the four manage to save the day somehow. Oh and if we didn’t mention this at first, they have a pet named the Pupa. Whilst we’d initially thought the comedy series was about a bunch of aliens making it on earth, we were proven wrong. For it’s not just about human bigotry and alien’s resting their cases on hijinks, but it is about a terrarium in Jesse and Yumyulack (the children’s) wall. 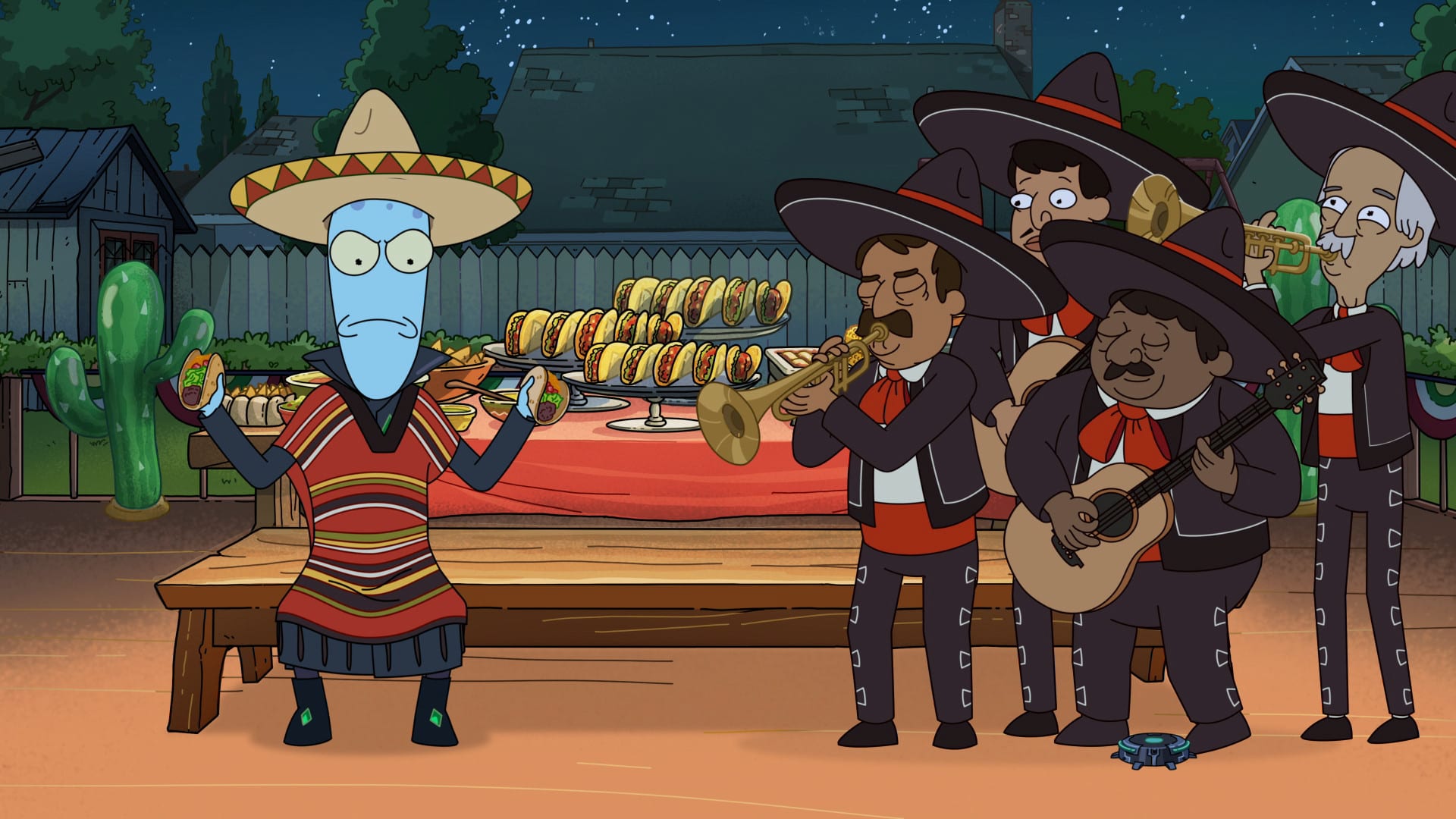 So what was the debut season of Solar Opposites all about, you ask? Well, it was a whole pretend-o thing, the finale we mean. It ended with Korvo and Terry reminiscing their old days. It ended with them altering the course of history by traveling back in time by two years. The plan was to try to get another alien Vanbo (voiced by Jason Mantzoukas) on earth. And when they did do that in ‘RetraceYourStepalizer’, they realized a couple of things. First off, they are stuck in a time stream, with Vanbo appearing in The Simpsons and Space Jam crossover. In a basketball match against the evil guys from Space Jam, helped by The Simpsons, Terry and Korvo realized that things were happening on the Pretend-O-Deck. The name is derived from Star Trek‘s Holodeck. In the end, it was revealed that nothing of that sort had taken place. Vanbo, The Simpsons, and the match. All of these were never a part of the show’s canon.

Jesse and Yumyulack weren’t a part of this odd deal in space. Since the penultimate episode, Jesse has been stuck with games and game clubs, at school. This time, she morphed her brother Yumyulack into a GameBoy cartridge. Weird, right? It turns out that this plot has been a part of the whole PretendoDeck. And that they too were trapped in the same ship as their parents. Where’s their loyal pet, the Pupa? It seems like he would want to break the fourth wall once in a while. This time he does so by directly speaking to the audiences and teasing the next season.

Things that were are looking forward to being: a little explanation on what PretendoDeck means for Korvo, Terry, Jesse, and Yumyulack, what The Wall means in the bigger picture and whether The Pupa has a bigger role than we expected him to play, just like the terrarium wall. More so, we feel like, season 2 is going to be about the effects on alien lie on earth. Will there be some sort of a conflict between the aliens and the humankind? It could be that the plot is more than just bigotry and conflict could very well arise.

More than that, there is simmering discontent in Yumyulack’s terrarium/wall. Mike’s leading the revolution/ resistance movement against the evil dictator Yumyulack. Maybe they may break the wall and rebel out in the open. This time, we mean literally and not just figuratively like the Pupa. Overall, the animation style is very Rick and Morty-ish. Of course, it helps that we hear Justin Roiland’s voiceover (Korvo) which reminds us of Rick all the time. Considering the two shows belong to the same company (Disney), they could very well be a part of the same multiverse. And in the near future, a crossover could very well be possible between the two.

Since every adult cartoon is owned by Disney. We are very hopeful about the future possibility of crossovers and multiverses.