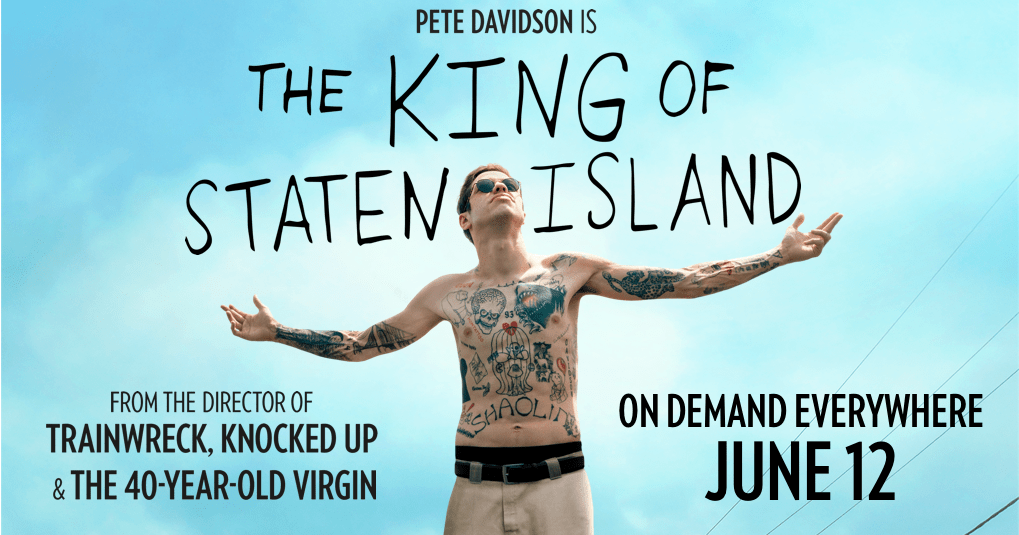 Pete Davidson from The King of Staten Island

As this pandemic is nowhere seems to be over and closure of all the Cinema Theaters more and more distribution companies are giving their films for a VOD or digital release over a streaming service. There’s a lot of really great, fun stuff coming to VOD in June. So that’s something good news.

so in this article, you will get to know about some of the best titles coming in the month of June.

Shirley Is biopic film, directed by Josephine Decke and casts Elisabeth Moss, Michael Stuhlbarg, Odessa Young and Logan Lerman. Moss plays Shirley Jackson., a renowned American writer and the film is about her life after her marriage. The film has a premise that follows Shirley and her husband Stanley Hyman moves to a new town to start a new life but they got themselves in a complicated situation which then leads Jackson’s next major hit. The film was first screened at Sundance Film Festival and go praised.IT will be available on Digital from June 5.

Becky is the thriller film of the month, the film follows Becky spending weekend at a lake house with her father that takes a turn for the worse when a group of convicts wreaks havoc on their lives. The film is directed by Jonathan Milott and Cary Murnion and written by Nick Morris, Lane Skye and Ruckus Skye. The film stars Lulu Wilson, Joel McHale.and Kevin James on prominent roles as Becky, Jeff and Dominick respectively. The Film is now released and available through digital and VOD.

Judy and Punch is a black comedy film which was earlier released in Australia and now will have its American debut through digital release. The film centres around two puppeteers named Judy and Punch who tries to regain the success they once had and due to some consequences punch got drinking problems. The film got a great cast in Mia Wasikowska and Damon Herriman as Judy and Punch.

As we are spending more time with our family we need something to watch with them so you got what the doctor’s order. Think Like a Dog is a film about a kid named Oliver played by Gabriel Bateman who is a tech prodigy and develops a device that can establish a telepathic connection with his dog and now some bad guys want to get their hand on the tech. The film also stars Josh Duhamel, Megan Fox, Julia Jones and Kunal Nayyar. The film will available one June 9, and it will be a good time to watch this film with your family.

Burden got its world premiere at the 2018 Sundance Film Festival and won the U.S. Dramatic Audience Award. The film is written and directed by Andrew Heckler who have beautifully written the plot of the film. It’s cast includes Garrett Hedlund, Usher. Tom Wilkinson, Forest Whitaker, Andrea Riseborough, and Tess Harper. The plot revolves around an ex Ku Klux Klan members who attempt to start a new life with the woman he loves. Now the KKK wants to kill Mike, so in order to save his family asks for the help of the black Baptist church congregation.

It is a documentary which traces back in time hat what happened to Paul Verhoeven’s Showgirls that it flopped and later became a cult classic among movie buffs. iN Showgirls, Nomi, a young drifter, arrives in Las Vegas to become a dancer and soon sets about clawing and pushing her way to become the top of the Vegas showgirls.

7. The King of Staten Island

The King of Staten Island is a semi-autobiographical film starring Pete Davidson and directed by Judd Apatow. The film has a story which follows a young man named Scott who spends his days sleeping, smoking weed and dreaming to become a tattoo artist. His life takes a turn when his mother starts dating a new guy, who is also a firefighter like his deceased father. The film was earlier gonna have a theatrical release in June but the producers went for a digital release due to this Pandemic.

Infamous is the Crime Thriller pick of the month, the film stars Bella Thorne and Jake Manley in lead roles. The film tells the story of a girl and her new boyfriend who does Livestream of their robberies and instantly gain fame over the internet.

Turquoise Jones a former beauty queen and single mom in a suburb of Fort Worth, Texas and prepares her rebellious teenage daughter for the “Miss Juneteenth” pageant. It is will be available on June 19.

Irresistible is a film that is a different take on political comedy, It stars Steve Carell, Rose Byrne, Topher Grace, Chris Cooper, Natasha Lyonne and Mackenzie Davis..The plot follows Steve Carrel’s character a political strategist who has to device some plan to win an election and also faces some challenges. It would be released by Focus Features on June 26.