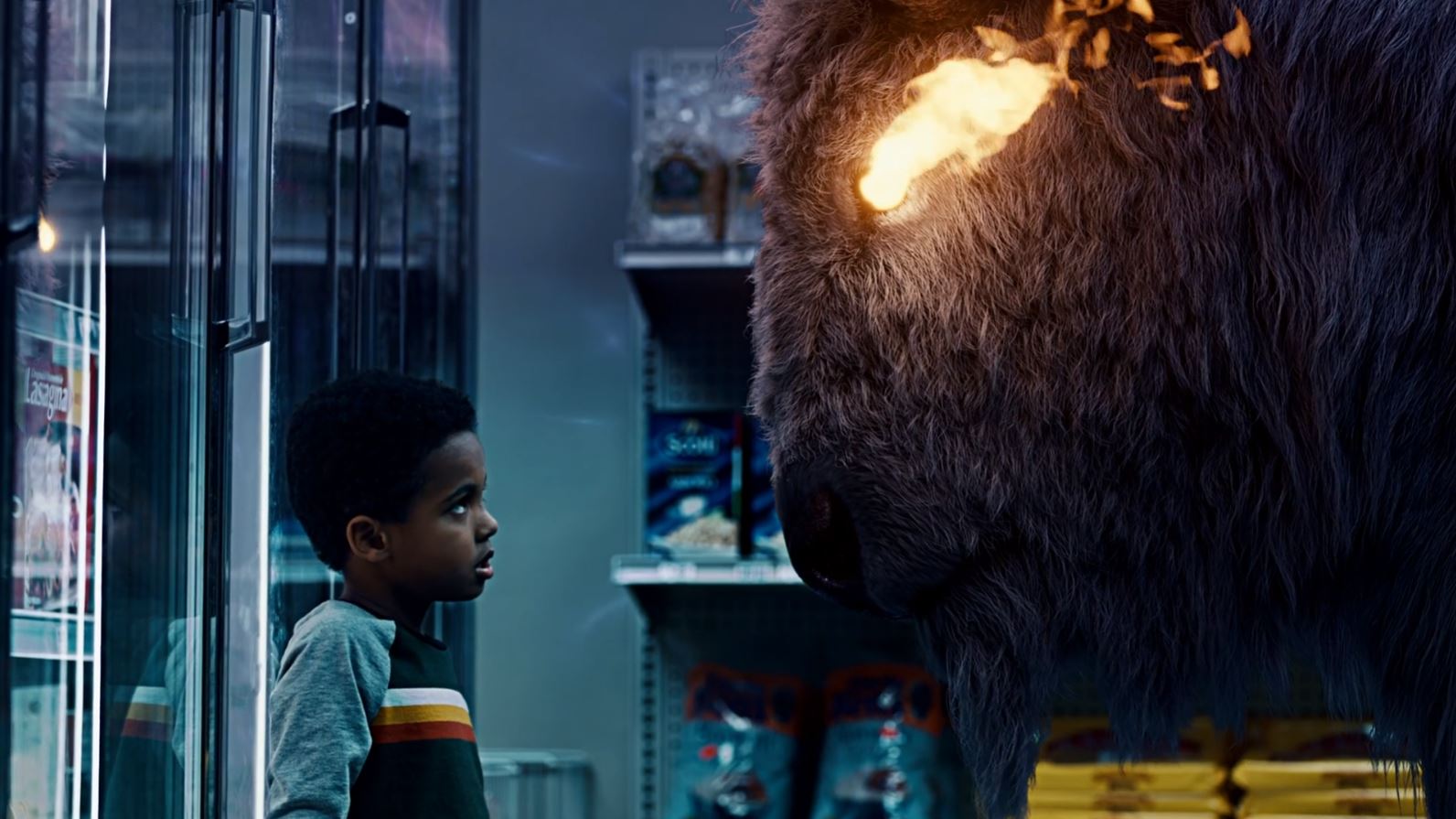 The last season’s continuation is pretty damned good as the story gets straight back to Shadow Moon. American Gods continue as it smooth sails into a stunning opening scene. Although one could be worried about the show being centered on Lakeside, it seems to have worked well. As Lakeside is immensely charming and the dark side of town is yet to come. The episode titled “Series Moonlight” opens up with a scene from the past as the Native Americans get slaughtered in Wisconsin territory in 1690. They seem to be killed off by Norse men as the victims pray to their God, Inaemehkiwok. As they finish the merciless slaughter, the men pray to the thunder God, Thor himself, as they offer him their victims. They do this to try to stop the impending snowstorm.

From its looks, it’s clear that the place is Lakeside and is the reason why Mr. Wednesday sent Shadow Moon here as it was the home of Nordic followers. This is even backed up later as Anne Marie mentions how the town’s founder only asked for an ice festival to be celebrated. This explains the power of the Nordic Gods. And even acts as an insight into the Native American Gods hating Mr. Wednesday. 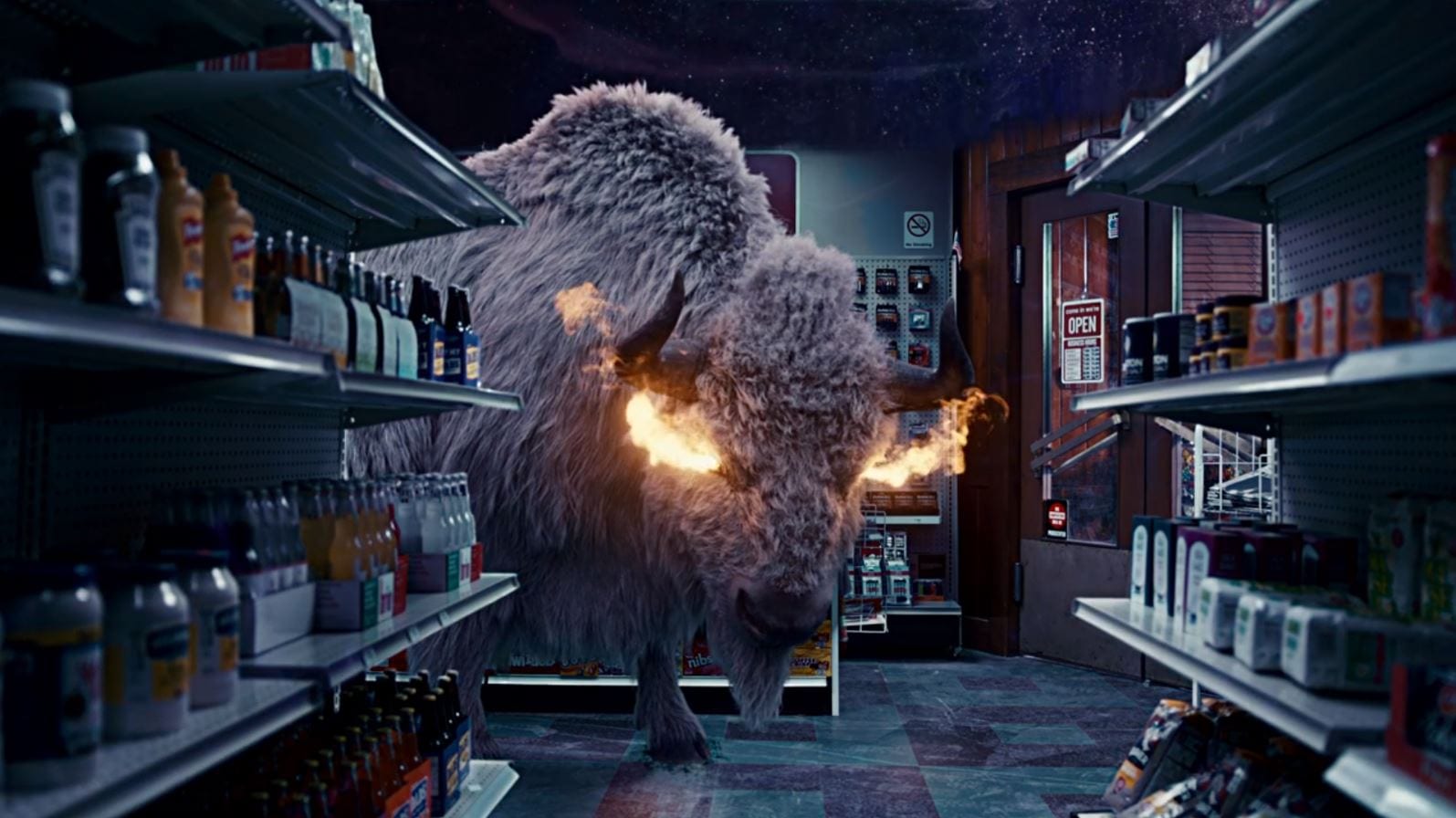 Shadow dreams of a bull chasing him.

As this episode of American Gods resumes, we pick up with Shadow Moon. He has a shotgun pointing at him at the end of the last episode. And we learn that the woman is simply the property manager who also works for the town newspaper. She gives him a spare key and lets him in. But to his surprise, the heater seems to be not working. He then has a flashback regarding himself as a child when Bilquis calls out to him. And also, a buffalo chases him, which points out the two choices he will have. This will be discussed later. This event even plays to the promo for next week as Shadow looks for Mr. Wednesday as he refers to his dreams.

Meanwhile, Bilquis has a tech guy around her. It is one of the oddest scenes in the episode as the guy seems like he is there to work on her laptop. But as it turns out, it was only a kinky roleplay between the two. In reality, the guy was one of the biggest IT CEOs and powerful people around, but Bilquis does not seem to care. He is frustrated as he is not getting to touch her. As he was the one who was providing them with all the resources for her lifestyle. Bilquis relents, and they finally have sex, only for the guy to be swallowed up whole by her. In the book, the guy was someone from Hollywood than a tech guy. This change could have been done due to the change in society from when the books were written. 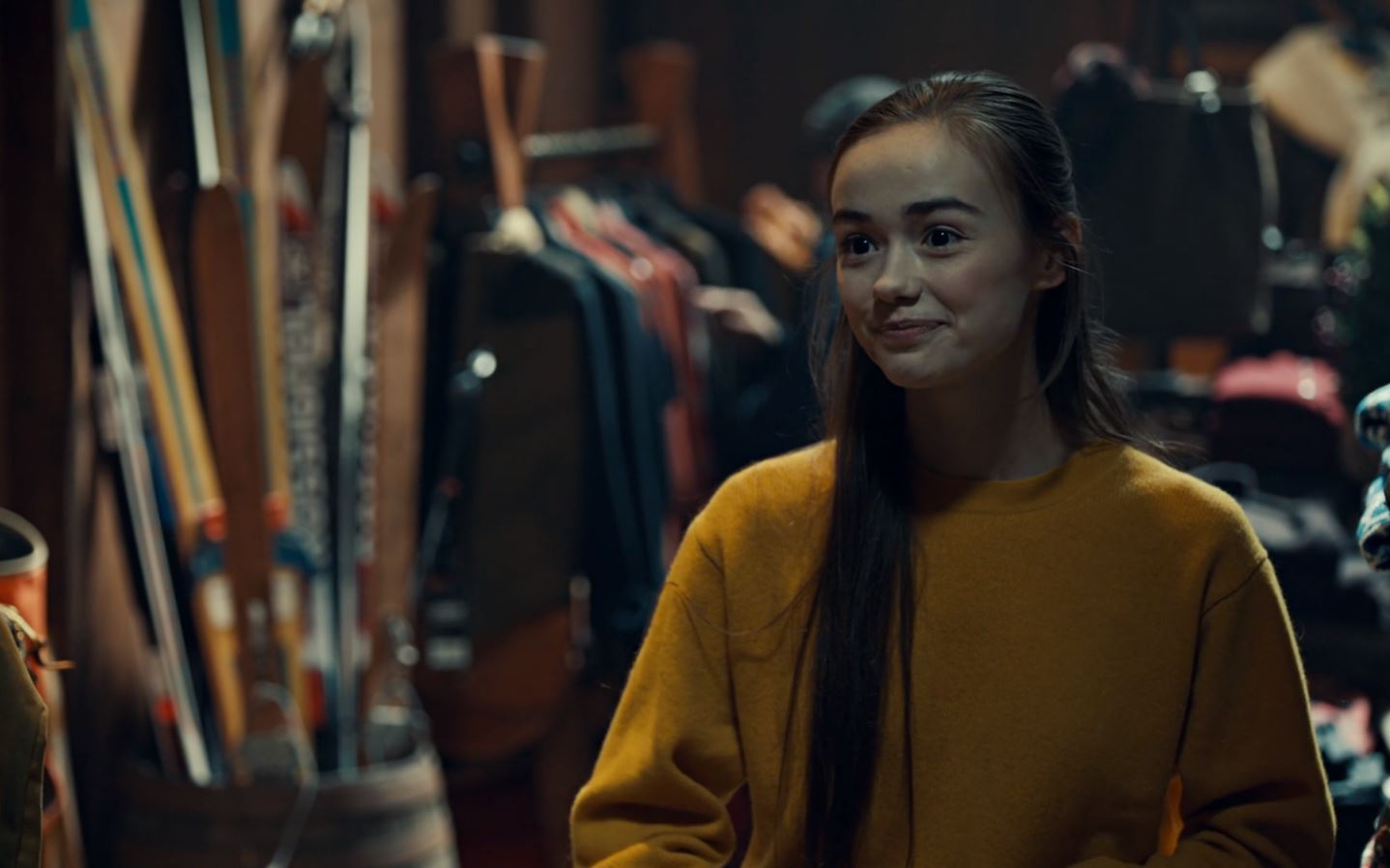 Alison, a girl who teased Shadow, helps him out in picking his clothes.

Back at Lakeside, we follow up with Shadow as he fishes out an invite from his mails. This invite was for a memorial service for Zorya Vecherhyaya in Chicago, who was killed off last season. After this, Shadow gets picked up by Anne Marie, who shows him around town and even takes him to get some new clothes. She even tells him about a tradition in town where they kept a clunker car on ice and bet on it when it will fall into it. Anne Marie herself is a significant character but is gender-swapped from the books. She is the reason why the Lakeside is so pristine and free from outside influences.

While getting his new clothes, he meets Alison, a girl who teased him with her friends during the last episode. And she helps him with his selection, after which Shadow purchases a clunker ticket. As he could see frost buildup on board, he selects March 23rd between 7 and 8 pm for his bet. Later Alison goes missing making Shadow the prime suspect. 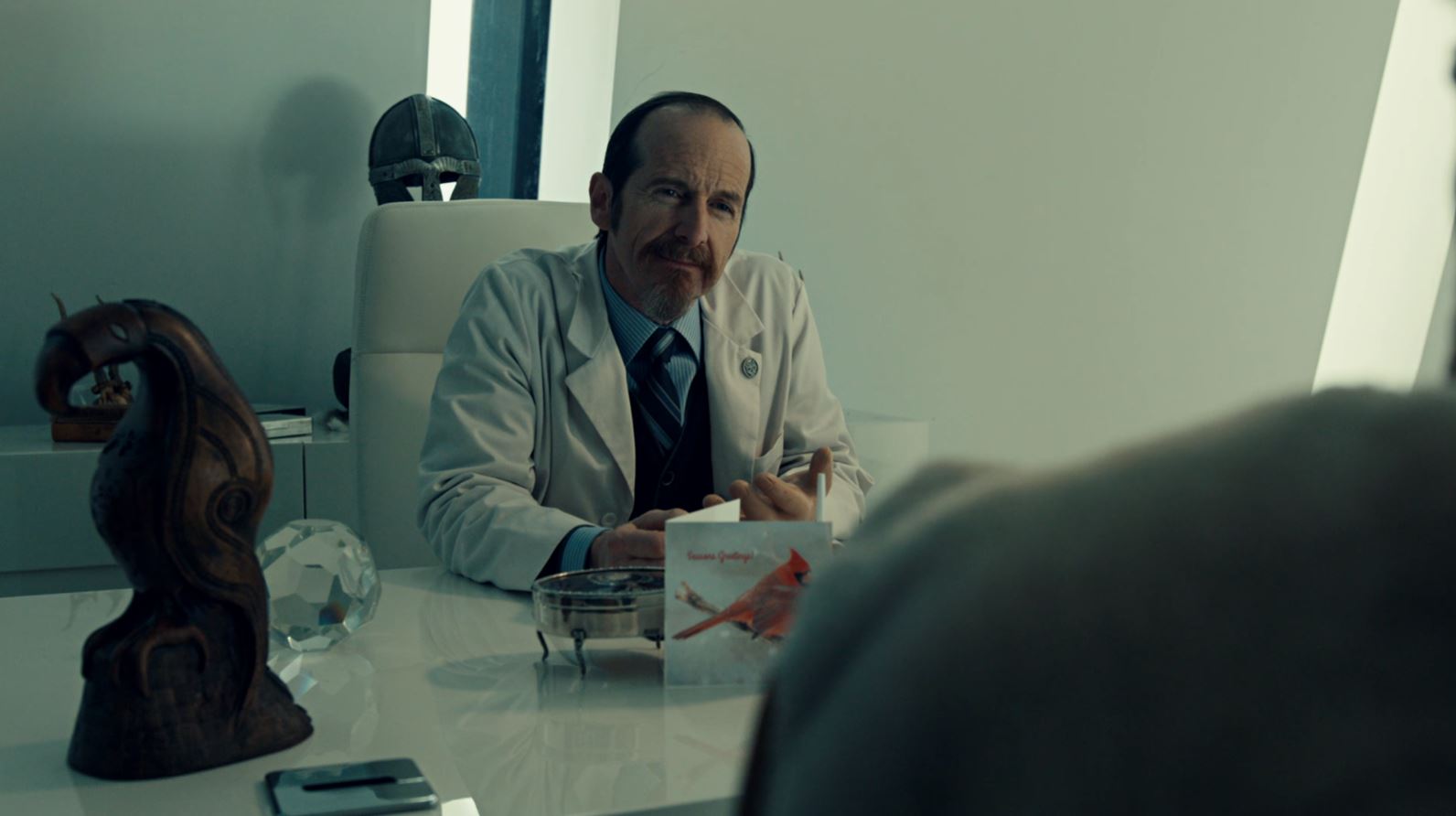 Tyr, a dentist who was an old God of War

We cut to Tyr, a dentist who was an old God of War and was all about justice. Now, as he seemed to be gaining power, Mr. Wednesday visits him. He asks him for a donation to join his war. As he is there, he sees a postcard from Demeter, the God of Harvest, soon to make her appearance in Season 3, according to the promos. She has an unresolved romantic history with Wednesday, which explains the postcard. Meanwhile, Saleem is distraught at Jinn’s decision to leave his side. In Cairo, he learns that Jinn had been given a mission by Mr. Wednesday as he sets off to Chicago to meet all father himself. Jinn and Saleem are shown to have a much-expanded role than that of the books. This could be due to an attempt to extend the series to further installments.

Now we see Shadow trying to get a car with the help of a police officer. But it turns out that his property manager, Marguerite Olsen, has a spare car. She refuses to sell it but is ready to rent it out. As Shadow drives to Chicago, something hits the windscreen damaging it. Now he must get it changed or else, it could make him a suspect instantly later. When he finally arrives at Chicago for the memorial service of Zorya, Chernerbog is furious at Shadow turning up. A bit later, Mr. Wednesday turns up as we realize that Zorya cannot be revived. As there are no people who believe in her anymore. This hints at Mr. Wednesday’s desperation to get the war up to and running. 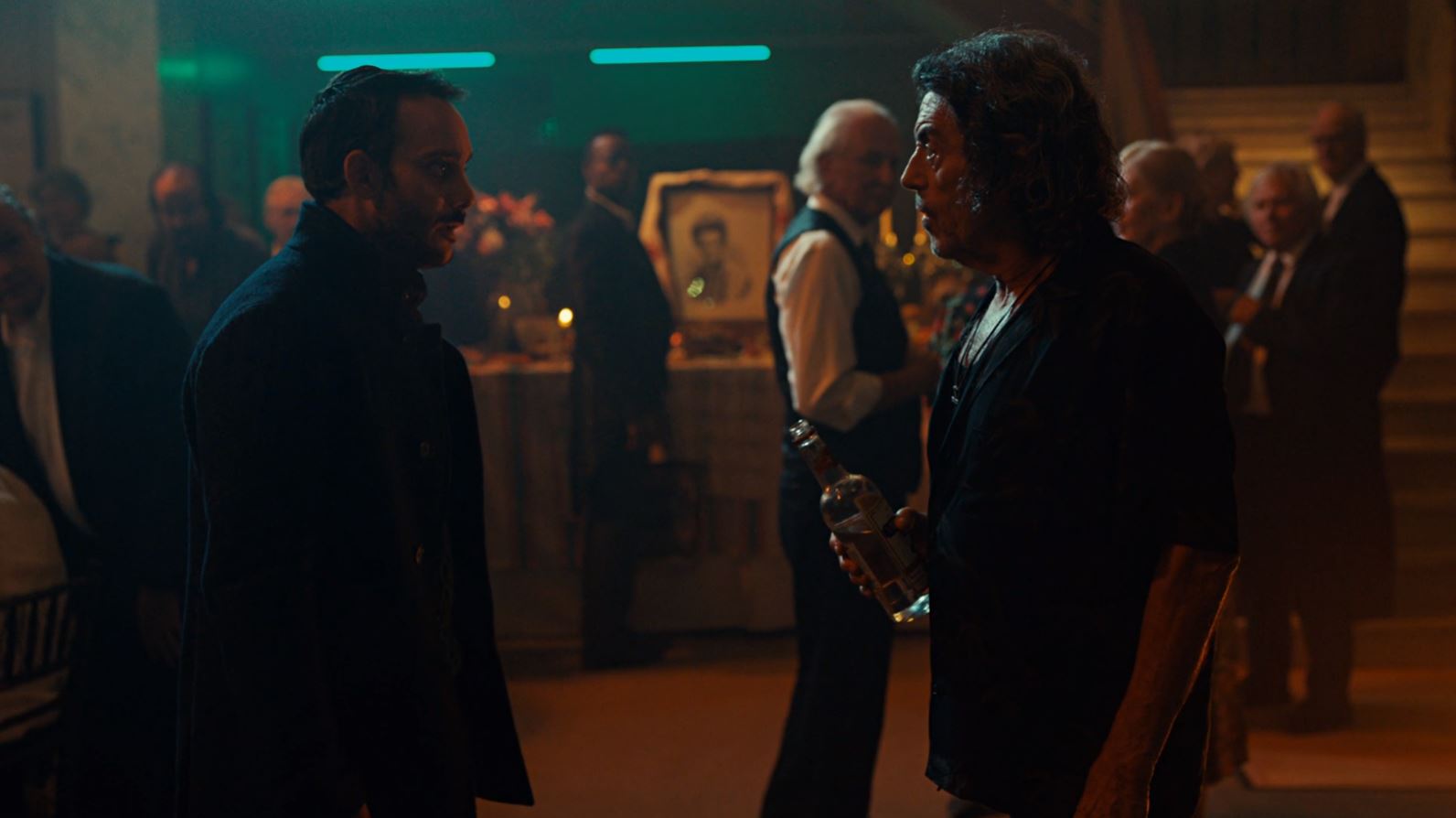 Salim crashes the Memorial service in search of Jinn.

As the dance begins, Shadow goes up to see another one of Zorya’s sisters. There Shadow learns more about the two paths that exist for him. He can go on, but he wants to live a normal life. The problem lies with his father, who tempts him due to the connection the two have. Later, as Salim arrives in search of Jinn, he crashes the party at the memorial service. Wednesday starts being borderline homophobe as people began to leave. As Shadow is about to leave, he meets up with Wednesday’s “partner,” Cordelia. She was with him as he would pay all her bills while helping him with tech stuff. Both of them promise to keep in touch if things became difficult in the future.

The next day as Shadow reaches back Lakeside, he is the prime suspect for Alison’s disappearance. This could have been an ideal cliffhanger, but the story continues ahead. As he is collecting firewood, he encounters a peacock. One would think that it’s Argus, the God of Surveillance, killed off after turning into a peacock. But according to the promos for the next episode, it appears to be Bilquis. As he heads back, we learn that he is proven innocent in the disappearings. And now Marguerite has a liking to him as the heater is now up and running. There is a rumble of thunder as something flashes over the Clunker giving an ominous and amazing visual to the end of the episode. 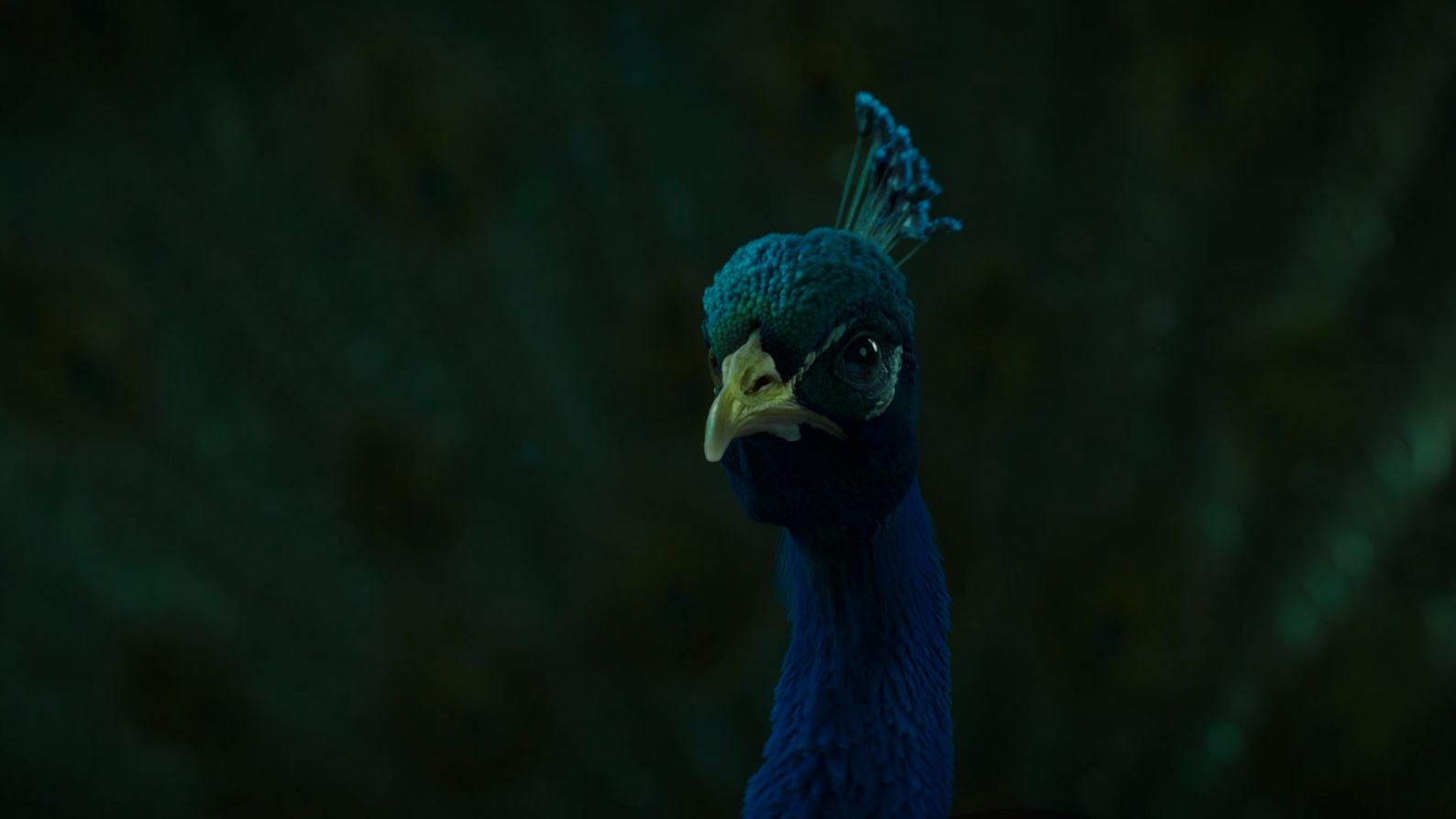 Shadow encounters a peacock as he collects firewood.

In comparison to the books, the story is proceeding very slowly. The “Lakeside” portion of the story is exciting, making Neil Gaiman quite excited to adapt it. But American Gods being a story that focuses much on ambiance rather than grasping storylines. It has some hard to replicate elements for a TV Show which American Gods can deliver. The show has been successful in maintaining amazing and ominous visuals. But in an attempt to extend the show, they try to deliver elements that really don’t have much of an impact on the story. For instance, the scene with Bilquis has no importance and could have been avoided but feels like a source of something exciting for the audience to lay their eyes upon. Other than that, the visuals of the Buffalo and shots of snow were examples of amazing cinematography.

You can watch all episodes by American Gods on Amazon Prime Video.