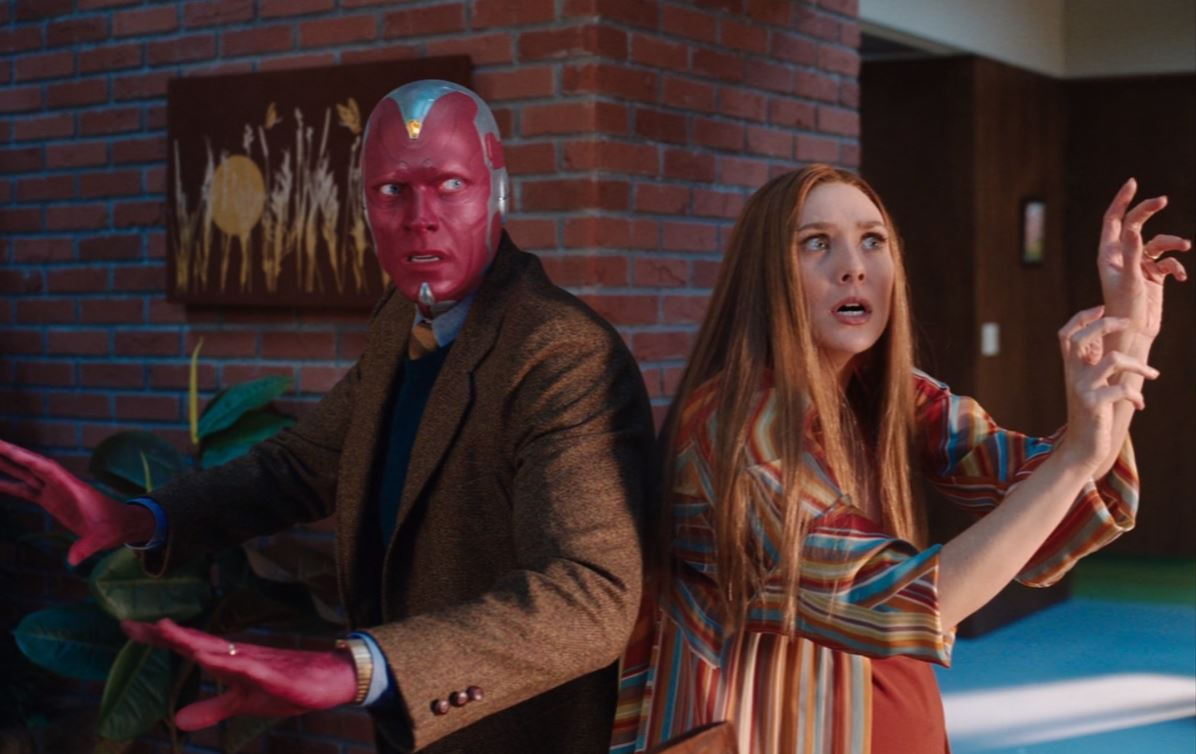 Last week with the premiere of the first two episodes of WandaVision, we can understand that everything is not as it seems. This sitcom style world, which changes decades with each episode, has definitely some secrets hidden within. This first comes to our head as we remember that Vision had actually died in Avengers: Infinity War. Weird incidents follow as something weird happens in the dinner with Mr. and Mrs. Harts. We see S.W.O.R.D., the symbol on a book, and a drone, which was surprisingly colored. The only other part where we experience color is when Dotty’s palm bleeds out. The figure’s appearance in a beekeeper outfit and how Wanda seems to have rewound the time at her ease. Last but not least are the constant calls by a man who seems to be asking Wanda as to who was doing this to her.

The end of episode two seems to have switched the setting of WandaVision to the 1970s as color starts filling our screens, which followed after the revelation that Wanda was now pregnant. We follow up with Wanda and Vision, who themselves are surprised by the overnight pregnancy. So they call up Dr. Nielson, who comes check Wanda out. He feels that everything is normal as Wanda was four months pregnant. But that certainly wasn’t true as it had actually been only 12 hours. To not reveal their secret, vision gets nervous and relies on asking hypothetical questions, but Wanda stops him. As Vision guides Dr. Nielson out, he comes to know of his trip off to Bermuda. But when Vision turns back home, something strange was happening as Herb was cutting down his wall instead of the plants. But he soon forgets it as Wanda seems to have become bigger.

The Pregnancy and a chance of foreshadow 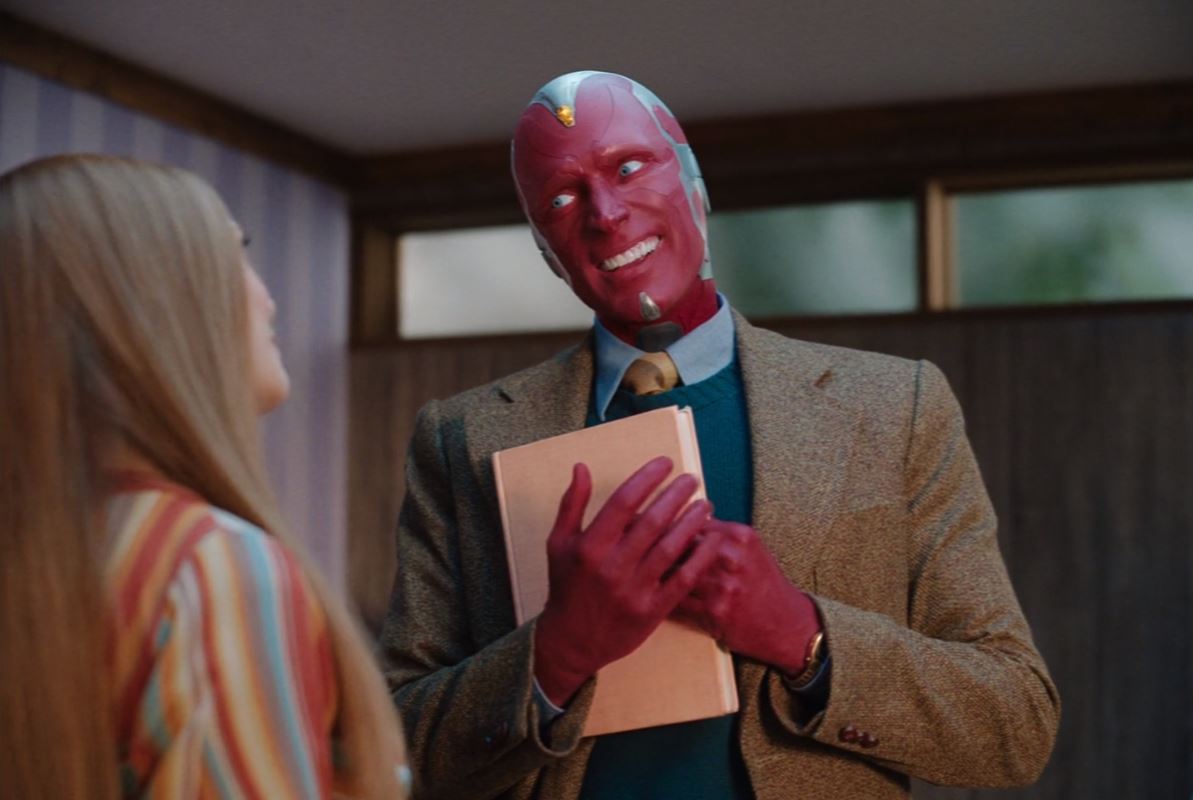 As the couple prepares for their baby, Wanda sets up the baby’s room while Vision freaks out about being a father. As Wanda tries to calm Vision down, she feels a kick from the baby. During which Wanda, without her knowing, converts the fake butterflies to real. This could be a foreshadow of a character we are yet to see. In the House of M storyline in the comics, Wanda uses her powers to create an alternate reality. And everyone is unaware of this except for a few exceptions, such as the mutant Layla, who later comes to be known as Butterfly. Two more instances back this theory up. When the couple argues as to what to name the baby, Wanda wishes it were a girl. When Vision practices to put a diaper on a baby, he uses a blond girl doll just like Layla’s appearance.

As the baby starts kicking, they realize that Wanda was now 6 months pregnant. As the baby was coming quite soon, both of them start deciding on baby names. Vision wants to name him Billy after William Shakespeare as he recites a few lines from ‘As you like it.’ At the same time, Wanda wanted to name him Tommy. The ones who read the comic books may have realized that it was the reference to Wanda’s twin sons born from Mephisto’s fragments. This opens up a possibility of the devil appearing in the show along with the chance of future appearances by Wiccan and Speed. Wiccan and Speed are Tommy and Billy, who join up with the Young Avengers in the comics.

Considering the rapid speed of pregnancy, Vision calculates the due date to be in three days.

This is followed up by Wanda going into the third trimester and learning breathing exercises. But during this, her power fritzes out, causing the whole neighborhood’s power to go out. Vision and Wanda discuss how people of Westview had come on the verge of discovering their secret. Vision agrees it’s more than that as he has his own suspicions. The events with Mr. & Mrs. Hart in the dinner and Herb’s incident meant something was definitely off. Suddenly, the scene rewinds to a few seconds ago, making us doubt whether it was an error. But it was actually a glitch in this universe. As Vision starts getting suspicious’ he is rewound only to change his opinion. We are not sure who is in the works, but things have started looking real shifty. A similar incident was seen in the last episode of WandaVision after the appearance of the beekeeper. 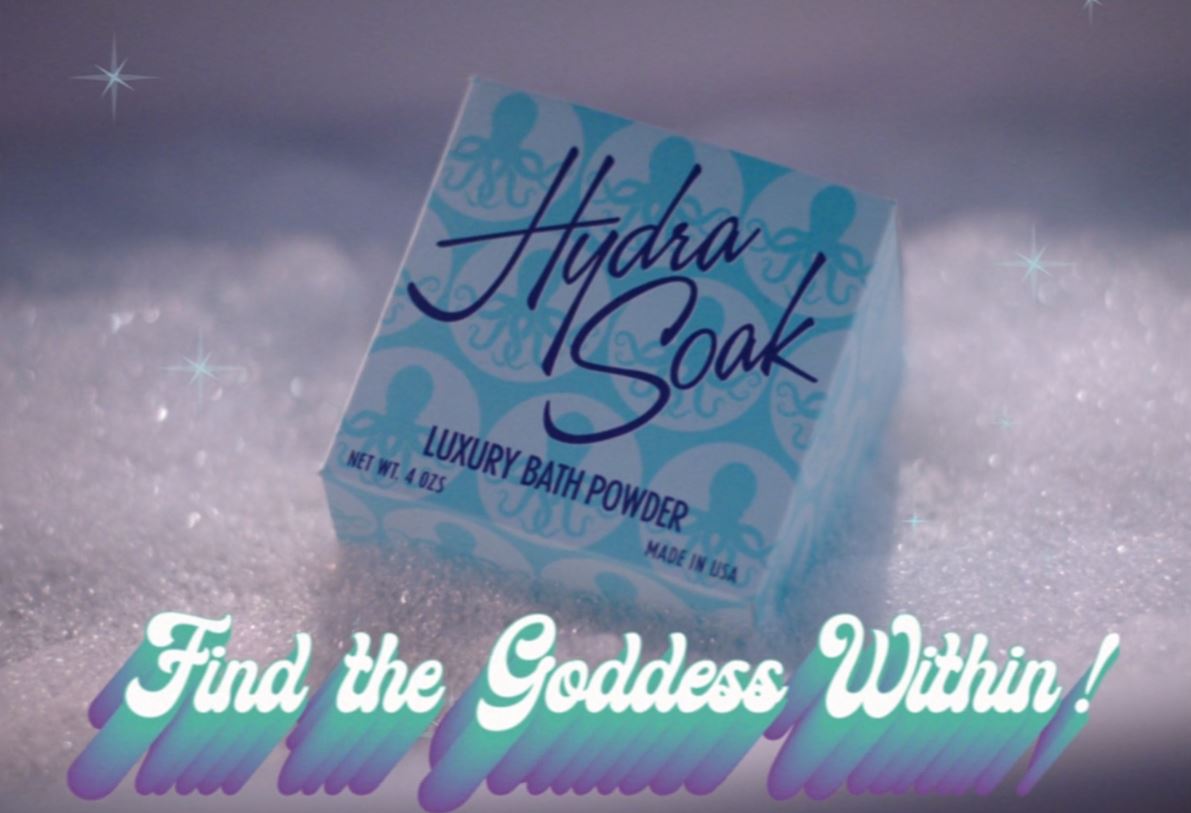 Hydra Soak, an advertisement for a Luxury Bath Powder.

The ads hinting to Hydra continue. The first two episodes of WandaVision show a Stark Toaster followed up by a Strucker Watch. Episode three shows a Luxury Bath Soap by Hydra Soak’s name, which will supposedly help one escape to a world all on their own. This could be a reference to the situation Wanda has in. An artificial reality where she and Vision could live happily ever after. And once again, the advertisements’ actors have recurred, which could have some connection to Wanda.

As the contraptions become much painful, Vision freaks out, causing Wanda to calm him down. But just then, Wanda’s water breaks, followed up by rains inside the home due to Wanda’s powers. Vision goes to grab Dr. Nielson while Geraldine arrives at their place to borrow a bucket. Wanda attempts to hide her pregnancy when an actual stork comes into their home to symbolize delivering of a baby. But she is soon found out as her pain worsens, making it finally time to deliver the baby. 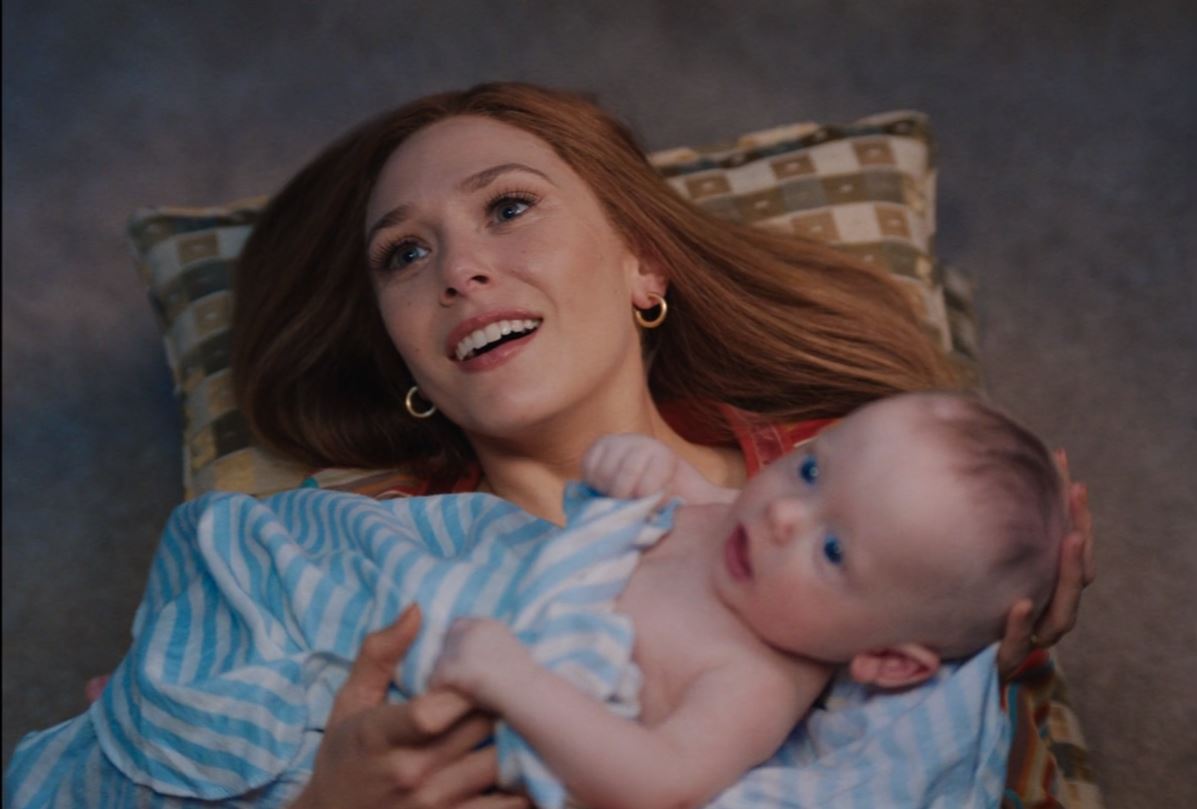 Wanda delivers the first of the two babies.

Meanwhile, Vision grabs Dr. Nielson as he was fixing his broke down car and heads back. Back in the house, as everything starts rumbling, Geraldine helps Wanda deliver the baby. A vision reaches back home to find out that the baby has come and names him Tommy. And as the couple has a touching moment, Wanda starts delivering another baby. And thus Tommy and Billy, the twins were born.

After the babies are born, Vision guides the doctor out again. Then, Nielson mentions something that seems to be a sort of revelation about how hard it was to escape this town. Vision tries to decode what it meant when he sees Agnes and Herb discussing something. He realizes something is wrong and goes to them. The two ask Vision about Geraldine if she was inside the house. They are very suspicious of her as she is new to town. And has no family, husband, or even a home. Herb was about to reveal something major about the plot saying, “She came here because we are all…” when Agnes stops him. 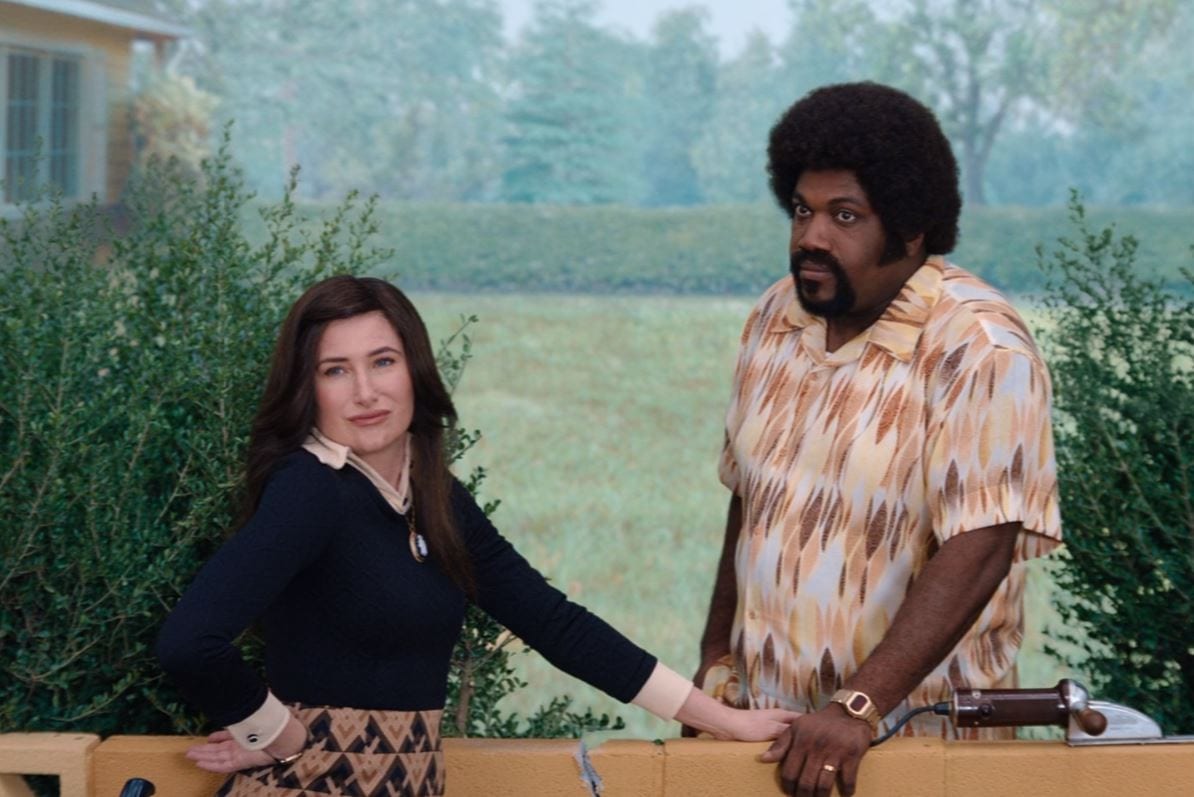 Agnes and Herb have suspicion over Geraldine.

Meanwhile, as Geraldine and Wanda talk inside, Wanda reveals how she had a twin brother, Pietro. As Geraldine hears it, she mentions how Ultron killed him. Wanda is absolutely shaken that Geraldine knows of this and starts to question her. Wanda asks Geraldine to leave when she notices her necklace. Here we again see the S.W.O.R.D. Symbol as Wanda asks her what the symbol meant who she really was.

As Vision returns home, Wanda tells him that Geraldine left for some work. But only moments later, we see her thrown out of some portal. This could be Wanda’s way of getting her out of her reality by disturbing it. As she is outside, falling on grass, several cars and helicopters surround her. And as the scene pans out, we see that Westview in WandaVision is an actual place. And this place existed in the form of a dome which was projected in by some huge lights. This could either mean Geraldine was there to save them or observe them as a part of the S.W.O.R.D. 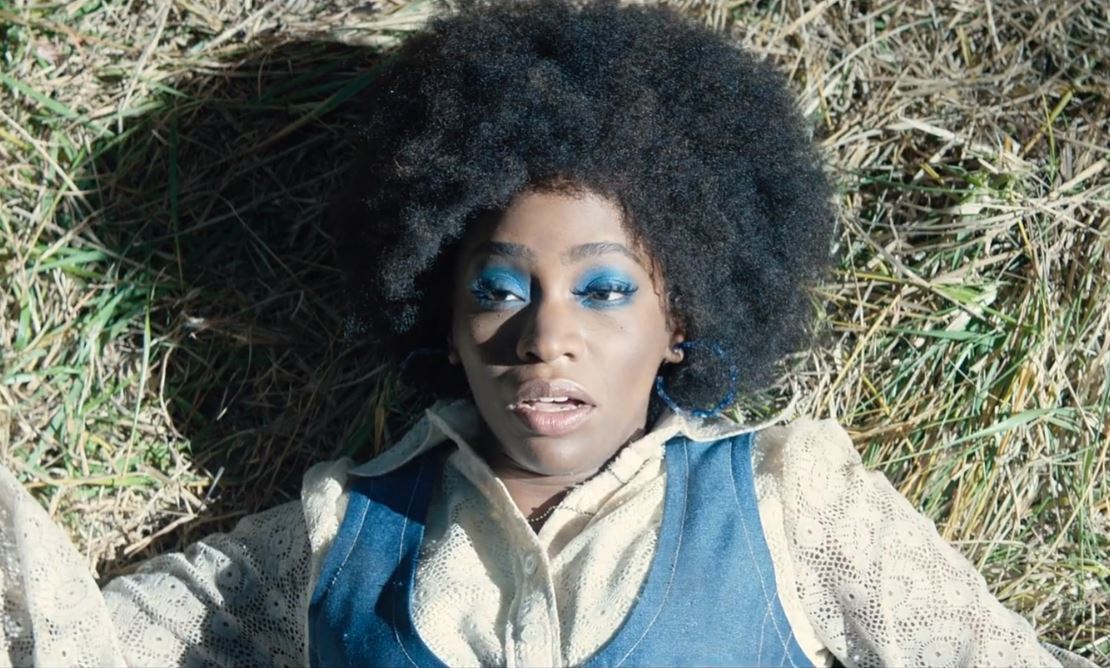 This episode proves clearly that something extraordinary was occurring with the MCU. And ‘WandaVision’ was a form of the bridge to join the worlds of reality and illusion. The episodes have a quick change in their tone, changing from humorous to creepy in an instant. This episode has surely helped the plot progress to a point where things can only become intense henceforth.

Herb’s interrupted word could have been “dead” or “trapped,” out of which either of them could turn out true. As in the trailer, Agnes does know that Vision was actually dead, and in this episode, they seem to be inside a giant dome while being observed. At the end of the episode, while Wanda tells Vision of Geraldine’s leave, the screen starts widening. This could be an indication of a further jump in time of sitcom visuals.

Overall, this episode of WandaVision was great as it has only increased one’s intrigue towards the story. And we will be waiting to see the future events that curtail the show. You can watch all episodes by WandaVision on Disney+.