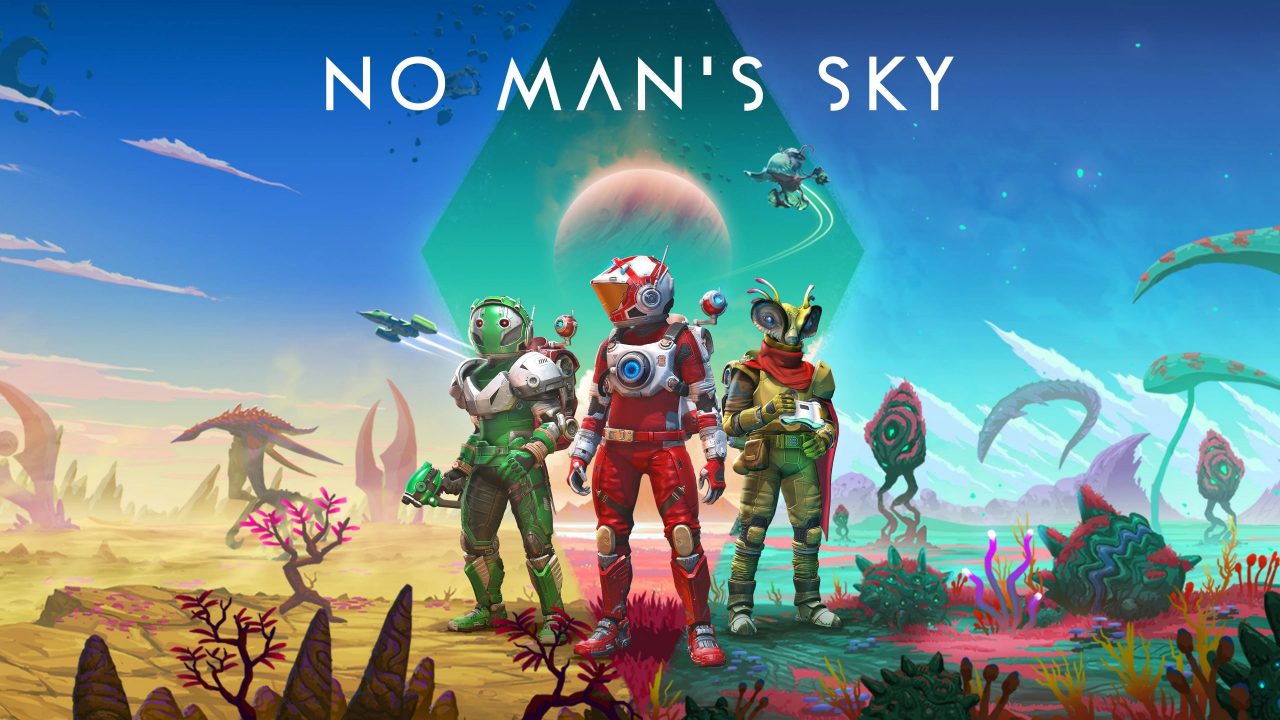 There’s no game quite like No Man’s Sky for explorers and base builders. With trillions of procedurally generated planets, each with its own unique biomes and lifeforms, the journey never really ends! The game guides new players through the basics, but there are dozens of features and secrets hidden just below the surface. Here’s a round-up of a few you may not have noticed on your own adventures.

1. Bad weather can be a great time to head outside. 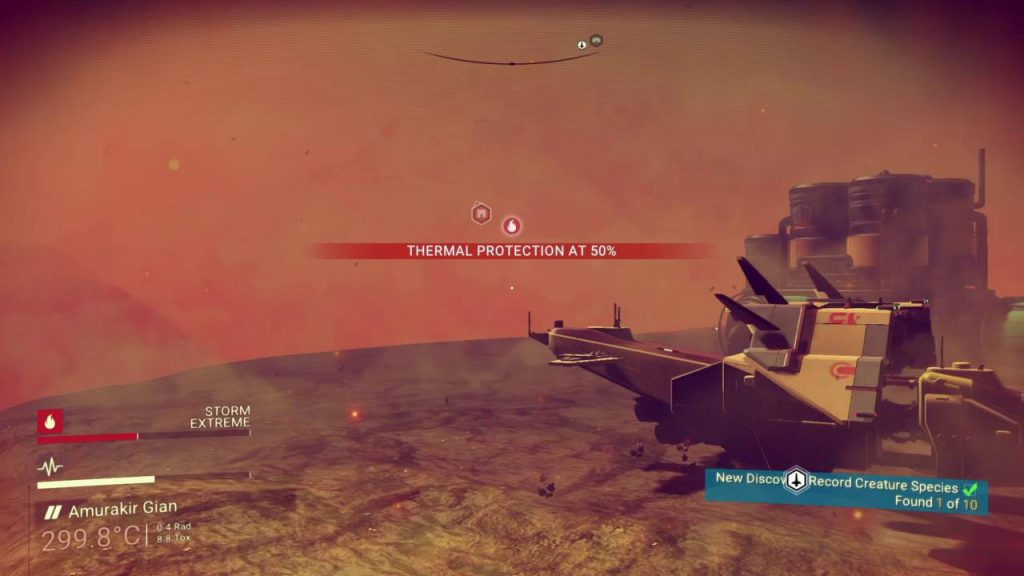 It’s certainly a warm day on this planet.

It’s a familiar scenario to anyone who’s played the game. You’re out on the surface, going about your business when you’re alerted of approaching weather events. This gives you just enough time to head underground or inside your ship so you can wait it out without any damage. Once you’ve stocked up on hazard protection, though, you might want to stay outside, as the extreme conditions confer certain benefits. As of the No Man’s Sky Origins update,

Keen-eyed Travellers may have noticed the thin white lines arcing around and between planets and moons. These are trade routes! Follow them with your ship to reach a trading outpost on the surface. Here, you’ll meet NPCs to interact with, trading terminals, multi-tools, and more. If you’re afraid, you may have lost the line, be sure to stay just off-center of it, so it remains visible as you fly.

3. Read up on the local languages. 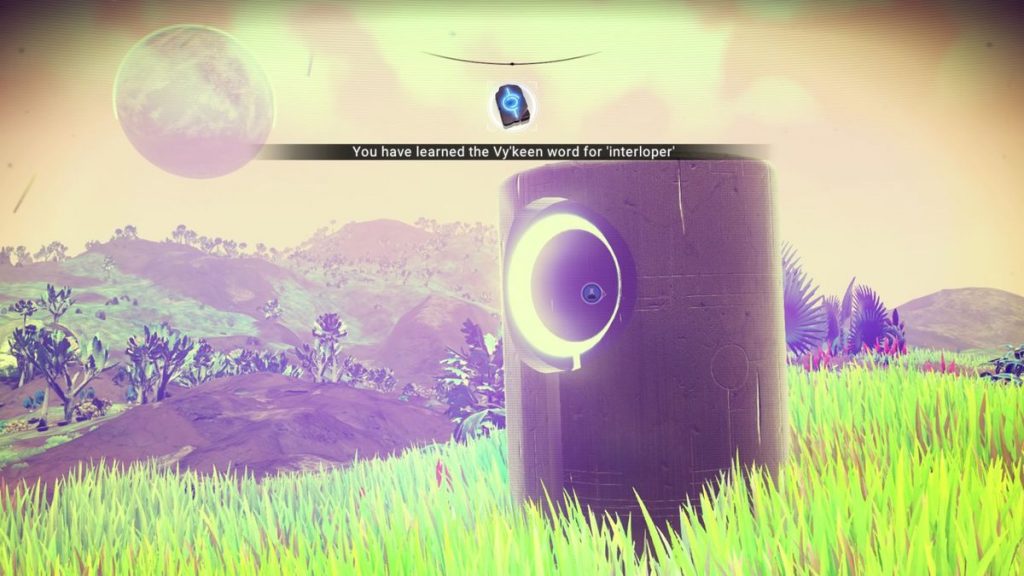 An essential word for communicating with Vy’keen.

There are three main alien species within No Man’s Sky: the synthetic Korvax, the small birdlike Gek, and the large militaristic Vy’Keen. All three have languages of their own that you can’t understand at the beginning of the game. The aliens are happy to help out, however. Most non-merchant NPCs are willing to teach you a word of their language if you ask, and you’ll find Encyclopedias in space stations and trailers. This is useful because most puzzles in NMS tend to be in the language of the dominant species of that system.

In addition, you might encounter alien NPCs who want your input on things like trade decisions, disputes, and scientific research. Giving them a sensible answer can net you some real potent upgrade modules as rewards.

4. Spend some time with the local wildlife.

A planet isn’t just the resources you can harvest from it, after all. Feeding the local critters some Creatures Pellets can prompt them to stay close, particularly if they’re skittish. Then scan them to see what bait they prefer, prepare it using a Nutrient Processor, and feed it to them. They might let you take something in exchange, like eggs or milk. You can ride them and lead them into pens. 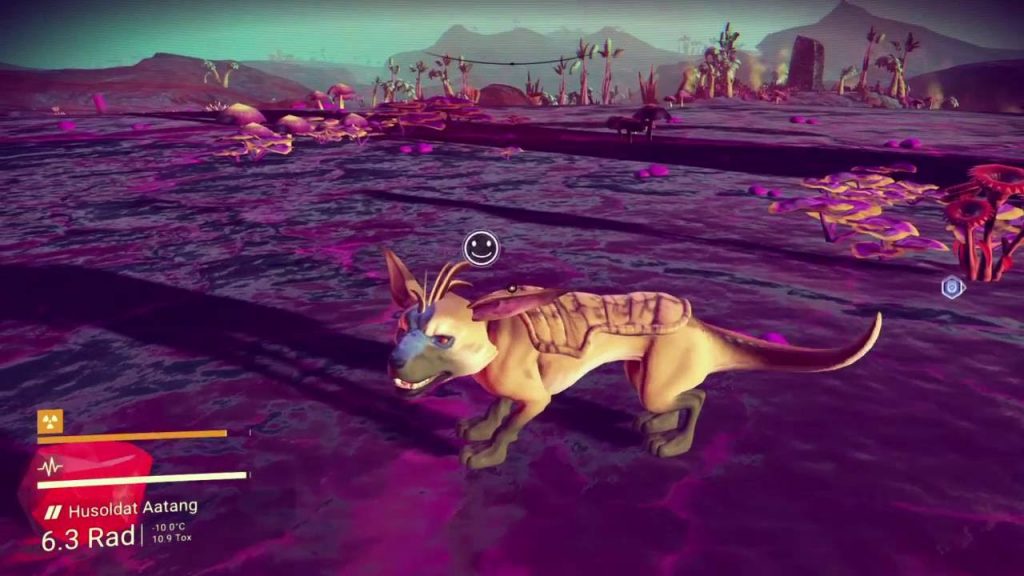 With the No Man’s Sky Companions update released in February 2021, however, animals have become so much more important. You can tame them permanently and make them your pet by feeding them and playing with them. Your new pet can now accompany you on all your adventures, help you gather resources, and even join you in fighting off enemies. If you put a Creature Harness on them, they can even talk to you, sharing their thoughts and feelings through a neural link. Isn’t that a childhood dream come true?

5. Scan everything you see.

No, really. Whether animal, mineral, or vegetable, use your scanner to investigate it. Upgrading the scanner yields big payouts for each lifeform, and uploading your discoveries from the menu can net you hundreds of nanites for a complete collection. Can’t find a reclusive animal? Some only come out during the day or night, and others may only be found in a certain hemisphere. If there are water bodies, there are almost certainly creatures in there, too. The Discoveries tab can tell you more about each species you have to find. 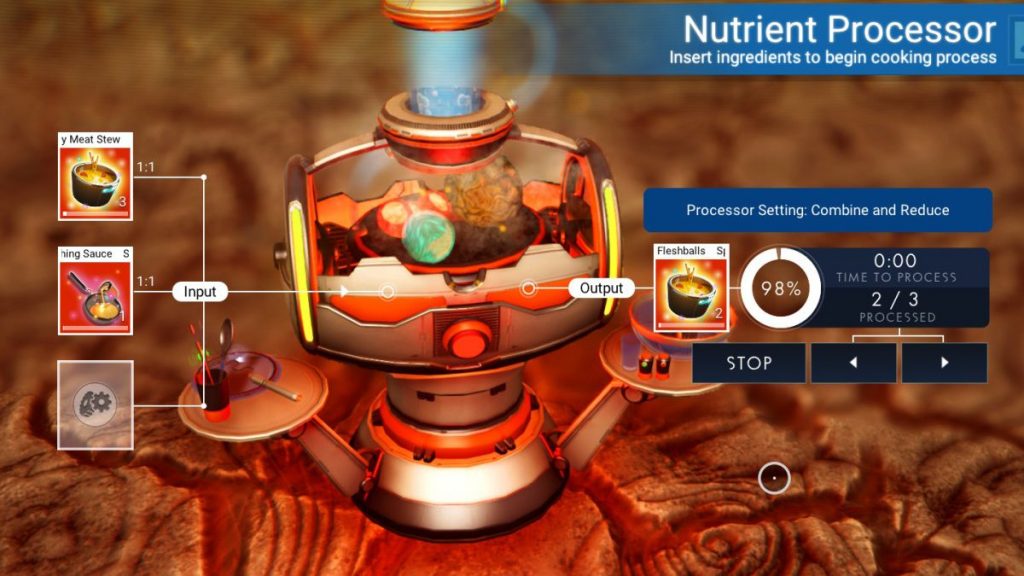 The Nutrient Processor is an unassuming device. You’d be forgiven for thinking all it could do was create animal bait, but no–this is an all-in-one kitchen and larder, with a storage section separate from your suit inventory. Using organic items harvested from plants and animals, you can create a vast range of delightful and horrifying delicacies. They sell well, and you can present particularly tasty treats to Iteration Cronus on the Anomaly for nanite rewards. Some of the things you can make, in case you were curious:

7. Recycle everything you find.

While scavenging supply caches and broken machinery, you might come across large quantities of apparently waste material. Rusted Metal is an example commonly found in broken containers. You might find the disgusting-sounding Residual Goop, Viscous Fluids, and Living Slime in other places, such as abandoned outposts. Resist the urge to get rid of them–with a refiner and some patience, they can be turned into useful resources. For example, just run the Goop through the refiner a few times. This process results in nanites, which are essential for buying upgrades at space stations. Hardly waste at all, once you know the trick! 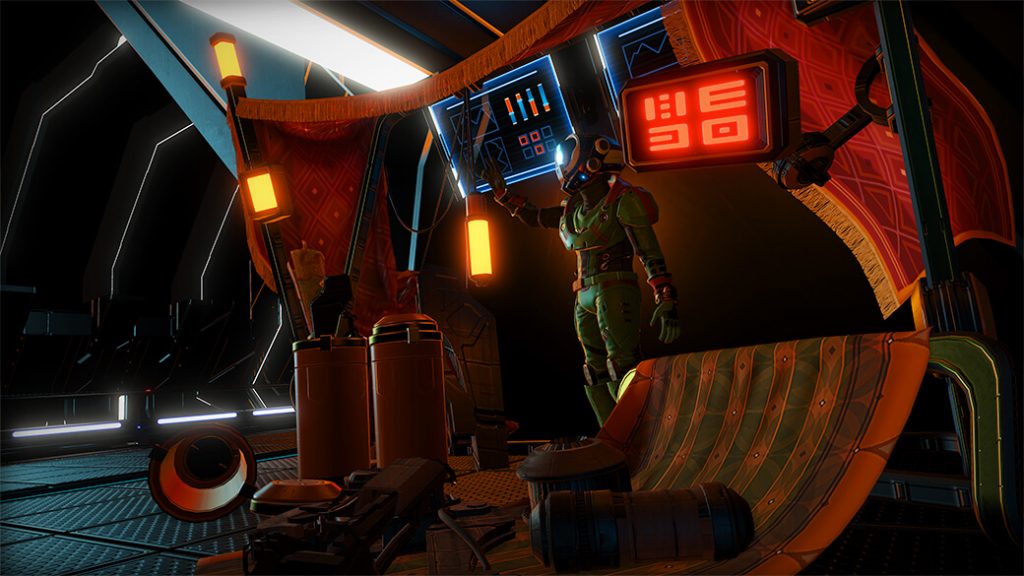 Every inhabited outpost has a Scrap Dealer set up under a red tarp. This alien NPC is your first contact with the black market. They will usually have contraband and various other suspect-looking cosmetics and decor for sale. However, unlike other merchants, this one accepts payments only in Tainted Metal, which is found on derelict freighters. Contraband consists of “illegal” X-rated upgrade modules, which can sometimes be far more powerful than their S-rated counterparts. You can also obtain these upgrades from random starships that land near you on planets; they do take off after some time, though, so you’ll want to be quick about talking to the pilot.

While completing the No Man’s Sky primary questline, you gain access to the game’s multiplayer hub, the Anomaly. Completing community quests issued from the Anomaly yields rewards in Quicksilver, the secondary currency of NMS. This currency can be used at the Quicksilver Synthesis Companion in the Anomaly to obtain certain cosmetics and decor items. Among these is a mysterious object called a Void Egg, introduced in the Living Ship update. Buying it starts the otherwise hidden Starbirth series of quests, which ends in you growing a completely unique, organic ship. You can upgrade their capabilities by finding more Void Eggs in space encounters. Their insides look very different from those of other conventional ships. 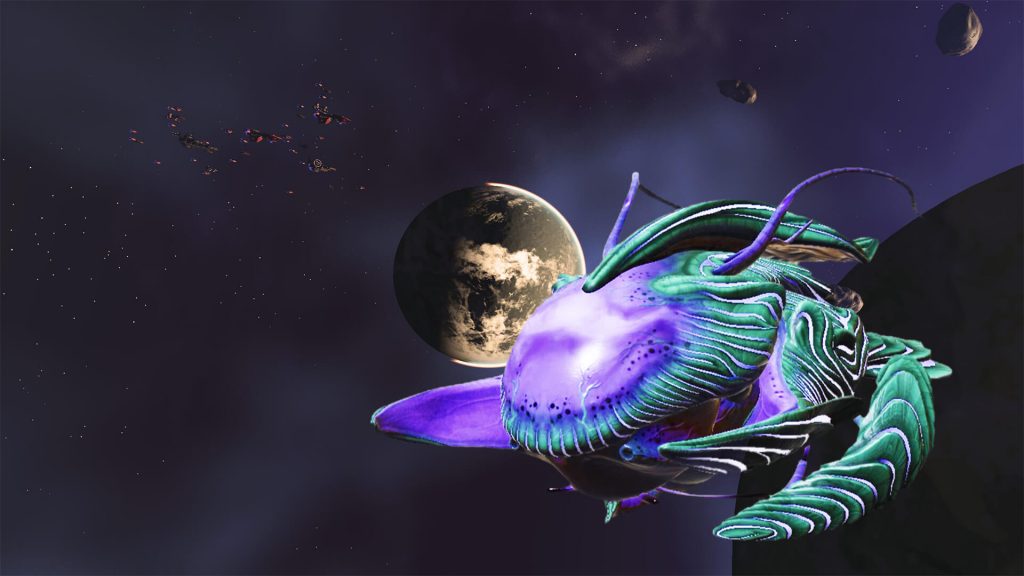 Manufacturing Facilities and Operations Centres are guarded by sentinels and blast doors. Get past them and solve the puzzle inside in order to receive Factory Override Units. You can find recipes here for some of the highest selling items in the game, unlockable only using these override units. These include the Fusion Igniter and the Stasis Device, both of which sell for a cool 15.6 million each.

You can also find the recipe for the Atlas Passes in this tree. These unlock special doors found in all space stations and most planetary outposts, as well as the many red cylindrical containers found everywhere. These contain useful items like navigation data and warp cells, which always come in handy while exploring. 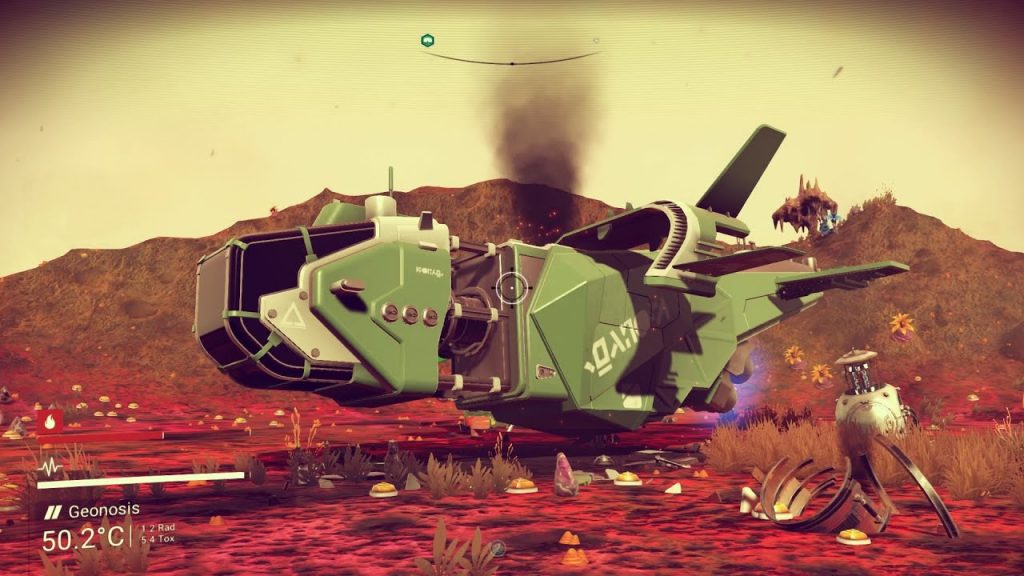 On your explorations, if you happen to find a crashed ship, all it needs to fly are some basic repairs to the launch systems, the shields, and the engine. The rest of the broken parts don’t require fixing up unless you’re really intent on keeping the ship. It can be flown into and scrapped at any inhabited space station. Don’t worry about leaving your previous ship behind–once the wreck’s been scrapped, your ship shows up. This is a fair way of making some early money and acquiring resources like Activated Emeril long before you get access to those systems.