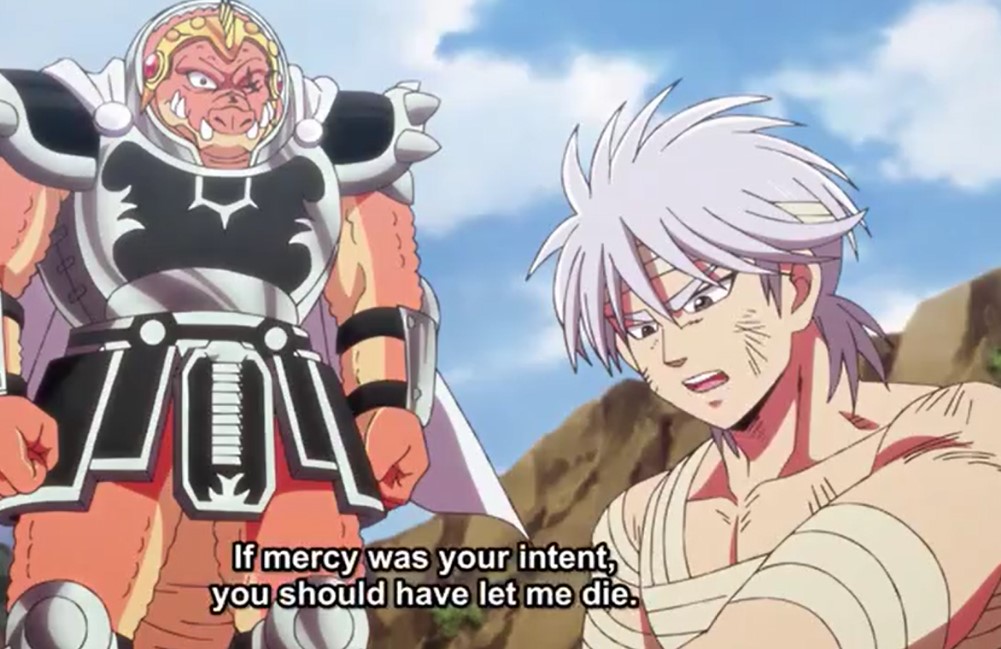 The Dark Army was overpowering the heroes, but they got saved in the nick of time. Hyunckle joins Popp and Maam to face the Dark Lord Hadler. Crocodine joins Dai and Baduck to face Zaboera and Mystvearn. Hyunckle saves Popp and Maam from Hadlars’s finishing blow. Popp is disappointed that he has to be thrown away, and Hyunkle is carrying Maam. Hyunckle console Popp by giving herbs that will restore his body.

Dragon Quest: The Adventure of Dai Episode 19 will be released on Saturday, 13 February 2021, at 9:30 AM JST. Dragon’s Quest is available every Saturday on all streaming platforms on time above. Check this anime here on Crunchyroll. Let’s see who will be beaten between Hadla and Hyunckle. 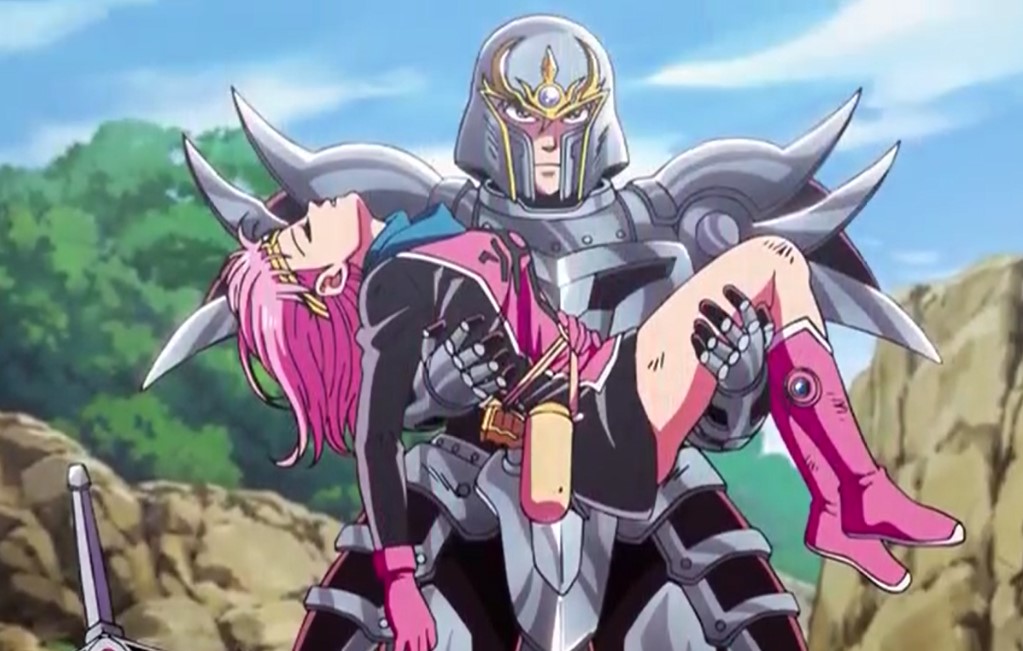 Hyunckle remembers when Crocodine told him to continue to help Dai. Hyunckle was ashamed that he tried to kill the people who saved him. He turned his hate towards master Avan without knowing the truth. Hyunckle asks Crocodine why he saved him, and Crocodile comments that mercy is returned with kindness. He thinks that his death would have made up for the crimes he committed. Crocodine told him that he could change everything by helping the heroes to save the world.

He also told Hyunickle that he believes the worth of man lies in how much they can let go of the past. Crocodine reveals that Garuda had told him that Dai and his friends had headed north to Valge island. Crocodine comments that he is offering the heroes with his help as it reminds him of a warrior’s honor. That is when Hyunckle decided that he has to help the heroes in taking down the Dark Army.

Hyunckle summons his dark armored blade that was inside the underground place. Hyunckle is surprised why it is here, and it is fully restored. Crocodine comments that the true weapon chooses its wielder. The dark blade was drawn here by Hyunckle renewed Aura. Hyunckle unleashes an Amado mode, and Crocodine comments that as long as he has the will to fight, the armor shall never die. The two allied and heads to the battle.

Back to the battlefield, Hadlar cannot believe that Crocodine can betray them and join Dai. Hyunckle comments that Hadlar will believe that is true when he sees Crocodine destroying the dark flame spire. He put Maam down and told him to head to Valge Tower with Popp. While the two are leaving, Hadlar underling attacks Hyunckle and laughs that they have chained him. Hadlar comments that traitors must die that the law of the Dark Army.

Hyunckle uses his muscles and breaks the chains while taking down two demons. He told Hadlar to stop being a coward and risk his life by killing him by himself. At the same time, Crocodine destroys the Dark Army using Beast King Anguish blast. The attack also destroyed the cursed field. Baduck praised Crocodine’s for using Angyuis blast, and Blizzblaze-Flizzard notices that his curse field is destroyed. 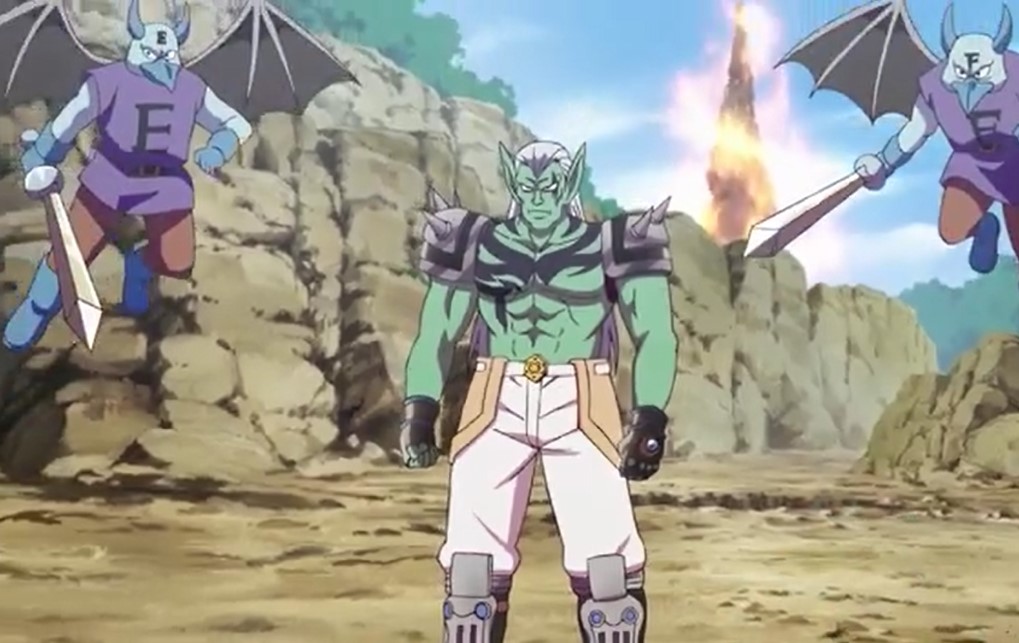 Hadlar notices it on the other side, and Hyunckle told him that the dark flame spire has fallen. Now it is time for Hadlar to fall, and Hadlar wanted to attack Hyunckle. Two demons tried to stop him, but he told them that he wants to show Hyunckle his true power. Hadlar comments that he will kill Hyunckle just like his father Bartos, and he attacks with a Kasiz spell. Hadlar is surprised that his Kabbom spell did not work on Hyunckle, who did not move.

Hyuncle reminds Hadlar that his armor repels all attack spells. The two started to change powerful blows. Hadlar us his Hell’s Claws that can penetrate anything in this world. Hyuncle notices that they are scratching his armor. Hyuncle uses his words to exchange slashes with Hadlar. The two demon buffoons who are watching are hearing for Hadlar. They are holding his fist, copying every move that Hadlar is making. Haldar unleashed a blow that opens the ground. He thinks that he has killed Hyunckle.

He laughs at the Hyuckle, who is on his knees, but Hyuckle regains his consciousness and stabs Hadlar on his chest. Hadlar can not believe that Hyuckle still has the will to fight. Hadlar falls on his back with a blade on his chest, but Mystveran shows up. While at the tower castle, Blizzblaze is disappointed d that Hadlar cannot beat few brats. He thinks that Dai’s head will be important to him. If he obliterates them, it will be more glory to him.

You can get more details about the battle here: Dragon Quest: The Adventure of Dai Episode 18.