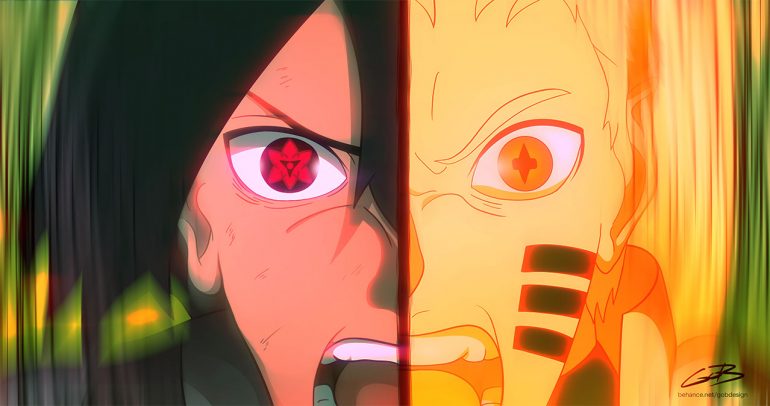 The Legend of Naruto and Sasuke is Over, Thanks To Boruto Manga

Boruto manga has the same problem as most other sequels trying to continue the success of their predecessor popular manga. Naruto’s story was a huge hit when it came out, introducing us to the unique rivalry between Naruto and Sasuke. At the same time, they were both strong characters that could take down any force with their joint powers. Naruto’s nine tails power and Sasuke’s superior dojutsu made them the strongest characters at the end of the Naruto manga. However, these two have been ruined in the new Boruto: Naruto Next Generations Manga. The power levels are completely different, and despite having years of experience on top of their superior power, we see that their abilities are constantly downplayed.

This article will contain spoilers from the Boruto Manga up to the latest chapter 53.

What Happened in Kara Arc?

The latest example was seen in the battle against the villain, Isshiki Otsutsuki. When Isshiki was revived, we were informed that Sasuke and Naruto had time to recover from their previous battle, and they are ready for the incoming threat. Isshiki arrives at Konoha, and everyone is already prepared. Naruto, Sasuke, and Boruto quickly switch the battlefield and take Isshiki to another dimension. The main goal is to stop him from putting Karma on Kawaki. So, it is three against one in this battle against a weakened Otsutsuki who has a maximum of one hour to live.

Naruto and Sasuke are immediately overpowered. Ninjutsu doesn’t work, so Sasuke and Naruto attack Isshiki with Taijutsu techniques. But no advanced techniques were seen. Isshiki uses his Dojutsu to summon the huge blocks, instantly stopping the flow of battle. Isshiki is putting up a great fight. This is when Boruto intervenes, and Isshiki pulls his hand. He won’t attack Boruto as Momoshiki is important to him. Momoshiki also doesn’t show any interest in this fight as it was to his own advantage.

Instead of having a joint effort to put up a fight against Isshiki, Sasuke is beaten down while Naruto activates a new Jutsu never seen before. It is a technique that fuses Naruto and Kurama’s chakra to give him enormous chakra, comparing it to the Nuclear Fusion process. This technique does give Naruto some advantage over Isshiki, and he can inflict some nice hits on his opponent. Kurama explains that he never recommended this technique before because it risks the lives of both of them if overdone. In this case, the hits of this fused form reduce the life span of Isshiki, and the time limit of Karma can be used to defeat Isshiki. Naruto is risking death using this technique, but he pushes Isshiki to the limit. 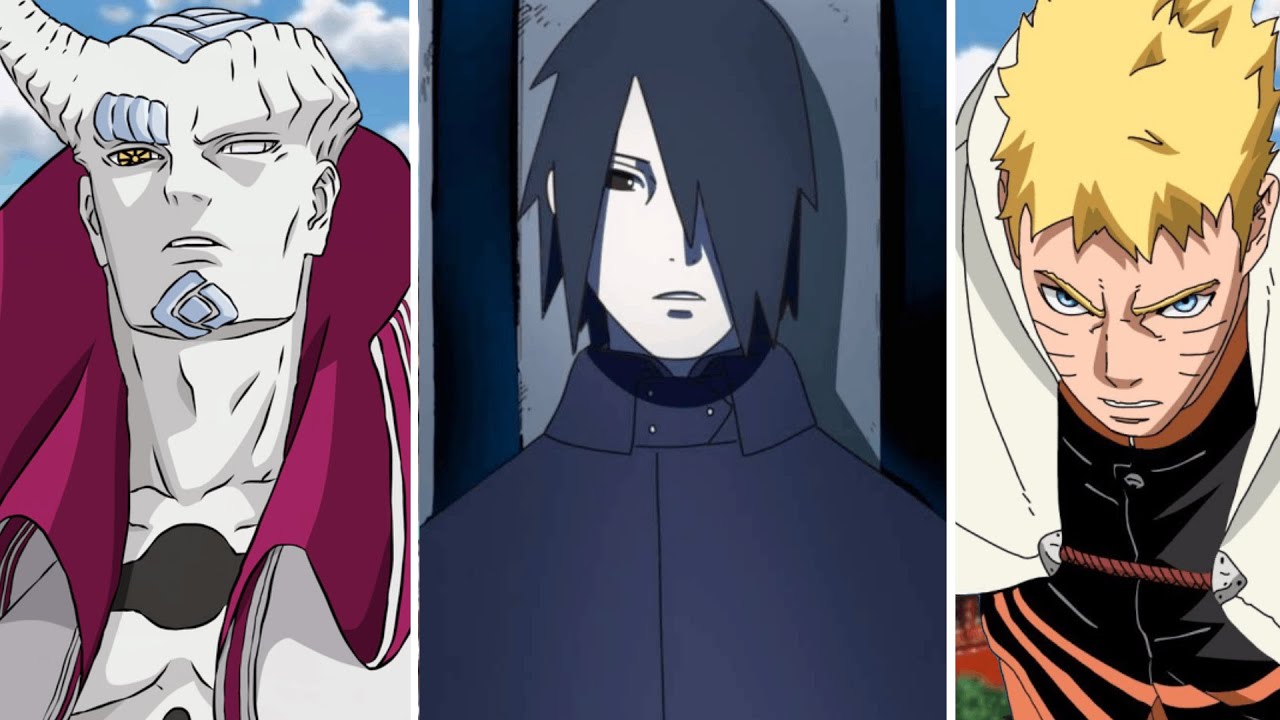 In his final moments, Isshiki summons Kawaki to the battlefield with his dojutsu. He has only five minutes left, but Kawaki is here, and it will save his life if he transfers his karma onto Kawaki. Isshiki seems saved, but Sasuke intervenes. He substitutes himself and gives Kawaki a chance to run away. However, Sasuke and Naruto are absolutely defeated while Isshiki stands over them. Isshiki threatens to kill Naruto if Kawaki doesn’t come back. We glance into the relationship between Naruto and Kawaki, and Kawaki decides to confront his fears. Kawaki tricks Isshiki by switching with a Shadow clone that doesn’t retain the Karma; Isshiki uses up his remaining chakra and dies.

This is where the second biggest arc of Boruto manga ends. Boruto inflicted the final attack on Momoshiki, which gave the Karma to him at that moment. We can argue that Isshiki has been defeated now, but we know that Kawaki will have the Karma once again. This is where we need to look back at the start of this manga. Boruto: Naruto Next Generation started with a tease that Sasuke and Naruto are presumably dead. They lost to Kawaki; Boruto is the only defense of humanity as they both fight each other on a ruined Konoha. This is how the manga first gained its popularity.

Then, in the Momoshiki arc, Naruto is abducted, and Sasuke, along with all 5 Kage, leads a battle against Momoshiki and his subordinate to rescue the Hokage. A great battle takes place where Boruto uses his disappearing Rasengan to end Momoshiki. This results in Boruto getting the Karma, which means Momoshiki is uploading himself into Boruto slowly. Once the upload is complete, Momoshiki will be revived, killing Boruto in the process. There is presumably no way to avoid the revival. This is one of the ways Otsutsuki manages to live.

Read: Boruto Chapter 53: Naruto or Isshiki, Who Will Die First?

After that, we are introduced to Jigen, who is himself controlled by another Otsutsuki. He goes up against Sasuke and Naruto, and the battle ends with Naruto getting sealed and Sasuke escaping with his life. Naruto is later rescued by Boruto and his team. Hence, Naruto and Sasuke, the strongest ninja on the planet, are not able to defeat, Jigen, “a weak vessel with low potential.” Isshiki is pushed to the limit due to an internal uprising as Kashin Koji defeats Jigen, who is still recovering from Naruto and Sasuke’s fight. Isshiki Otsutsuki activates Karma, and now he needs to inflict karma on Kawaki.

If you look at the pattern, from the start of Boruto, Naruto and Sasuke do a good job, but presumably, now these two are not good enough to land the final blow. It has to be someone else like Kawaki, Boruto, Koji who does the real job at the end. We are not used to this type of stuff, the fans who have seen Sasuke and Naruto as the main characters. They were a great force who never gave up and pushed to the very limit until the villain is defeated. Contrary to that, Boruto manga under the writer Ukyo Kodachi has made it clear that Naruto and Sasuke are now sided characters. They will only serve as the supporting forces for the next generation of the ninja.

Future of Naruto and Sasuke in the manga

So, here we are, almost at the end of the second arc, and the manga brings a much bigger twist into the mix. At the end of the battle with Isshiki, Boruto suddenly attacks Sasuke and blinds his left eye in one swooping move. Sasuke is not able to see the attack coming despite it coming from right in front of him. Boruto is now controlled by Momoshiki Otsutsuki, and he wants to trap Naruto and the others in this dimension. Momoshiki himself can leave the dimension, but with Sasuke’s Rinnegan damaged, no one else will be able to leave.

Isshiki is defeated, but Momoshiki is now out, and he is up to something. He may want to trap both Naruto and Sasuke inside the alternate dimension and take Kawaki with him to somewhere he can be used. We are still left unclear about the situation with the ten tails. The arc may be at its end, but Momoshiki may take up the villain’s helm with this. It is to be noted that Boruto is also in danger soon as it will take a little more time for Momoshiki to fully resurrect, killing Boruto as a result.

We know that Masashi Kishimoto has taken over the Writer’s role from here on, and he may bring some changes to the story. But the thing that Naruto and Sasuke are not being utilized to their full potential is sad. We have seen how Naruto used characters like the previous Hokage in the war that unfolded in Naruto. Some other key characters that had enormous powers were used in very creative ways. Even if the characters have to stay sidelined, we hope that Masashi-san has some consideration into this matter and brings a better arc for Naruto and Sasuke along with the development of Boruto and Kawaki nonetheless.