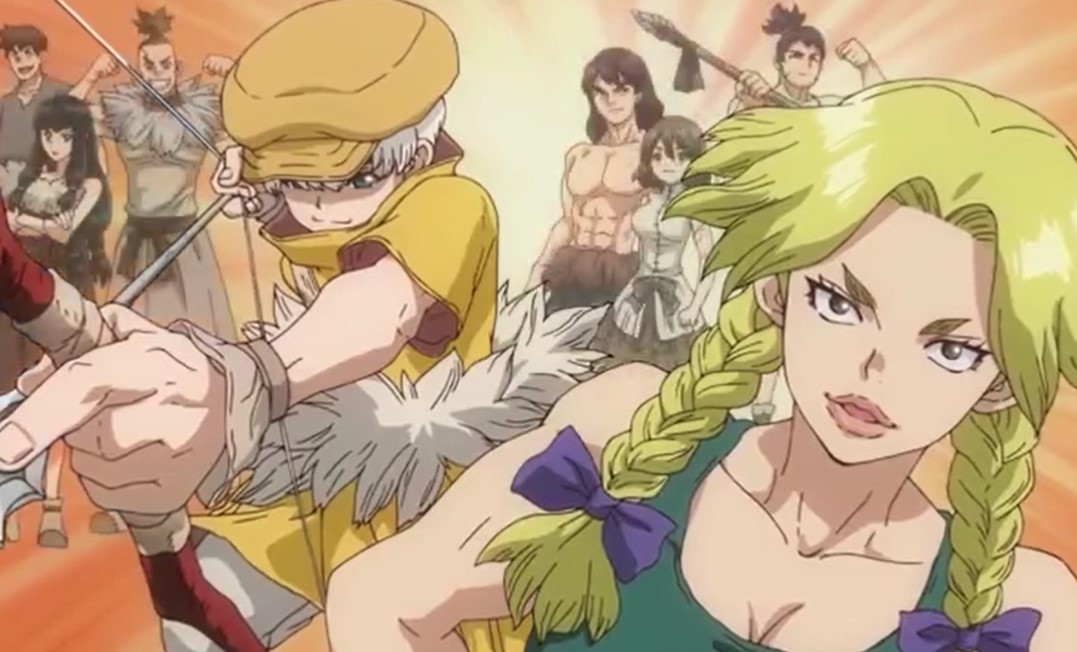 Senku adds that if they have access to the nitric acid brewing in the cave, they can make revival fluid and gunpowder. Kinro realizes that if their mission went successful Tsukasa Empire won’t be able to gain any more men. Ginro comments that they will get the ultimate weapons of science. Senku said that in the battle between the Kingdom of Science and the Tsukasa Empire, the victory condition isn’t the enemy annihilation.

Senku reveals that the winner of the battle will be the one who captures the miracle cave. Kohaku comments that Tsukasa will bring all of his forces against them. Magma shouts that they can pull it off since they have Senku’s sorcerer-Science weapons. Suika is worried that the enemies have more than a hundred people. Senku comments that is why Taiju and the others are working hard to get more allies.

He reveals that they will bring all of Tsukasa’s allies to his side using the mentalist bigmouth. Chrome asks Gen if he thinks the impersonation tactic will still work against Tsukasa’s crew. Gen told Chrome hos his impersonation is working, but he will be careful with Ukyo’s hearing. Chrome realizes that Ukyo saved him and decided to lie in front of Tsukasa. Senku left Saseki and others, making the Steam Gorilla adorable.

Gen and Senku head to the top of the mountain to communicate with Yuziriha. Gen started with his impersonation, and Tsukasa’s ally’s mind got blown away. The thinks that the one singing the song is Lilian Weinberg. He started to impersonate Lilian’s voice, and he greats the people of Japan in English. Gen told them that the U.S. military is back to save the citizens. Tsukasa’s allies cheered with joy, and Nikki told them to keep quiet since Tsukasa might hear them.

They reply that even if mighty Tsukasa knows he cannot defeat the U.S. military, they will come with guns. Gen continues to tell them that he will free the stone statues’ destruction caused by Tsukasa. But it will take longer for the U.S. to reach here. Lillian wants them to continue work with Senku until the U.S. military arrives. They cheered, hearing that Lillian is working withSenkuto to save them.

The crew left Nikki and Taiju near the cellphone. Taiiju comments that it is good to lure them using Lillian’s voice. Ukyo was near the mountain, and he heard everything using his hearing abilities. He is surprised that Tsukais being decided by his allies. Ukyo arrives at the scene and asks them if they are having fun. He comments that he likes to hear that phone call too. Nikki and Taiju are surprised how Ukyo has found out their secret.

Nikki realizes that they don’t have a choice, and they have to let Ukyo hear Lillian’s voice. Gen accepted the challenge to prove that it is Lillian’s voice. He told Senku that his impersonation was trained by megafan Nikki-sensei versus Ukyo’s hearing. It is a sudden-death duel. Gen got defeated by Ukyo on his first try since Ukyo also copy what Gen has said. Ukyo reveals that he knows that it is Gen who is imitating Lillian’s voice.

Gen realizes that Ukyo said everything in English, and it means he doesn’t want others to hear. He told Senku that he suspects Ukyo about his odd behavior. Senku took the cellphone and talk with Ukyo in English. Ukyo agrees with everything that Senku said and reveals that it helped Chrome since Tsukasa had laid the perfect trap for him. He was afraid that Senku arrives Tsukasa would have killed him.

Ukyo told Senku not to get the wrong ideas; he not on his side. Senku said if Ukyo was on his side, he wouldn’t have captured Chrome. Ukyo reveals that he just wants to know what kind of Senku’s crew is since he saw a secret mission. He saw Yuzihara patching the stone statues that Tsukasa destroyed. Ukyo is impressed by Senku’s crew that they are trying to save all of humanity even if it is risky using the power of science.

While Tsukasa receives news that Chrome has escaped. Tsukasa said there’s no problem with Chrome and ask where is Uei. The guards reveal that he fell on the waterfall and die. They gave Tsukasa Uei’s mask. The guard realizes that Uei told him to lies so that he can escape Tsukasa’s crew. Ukyo accepted to ally with Senku. Later Tsukasa visited the grave and finds Senku’s cellphone; he realizes that he has been fooled. Taiju, Yuziriha, Nikki has met with Senku. The battle is about to begin since Senku and his crew has arrived near Tsukasa Empire.

Preview and Recap: This Is Us Season 5 Episode 10