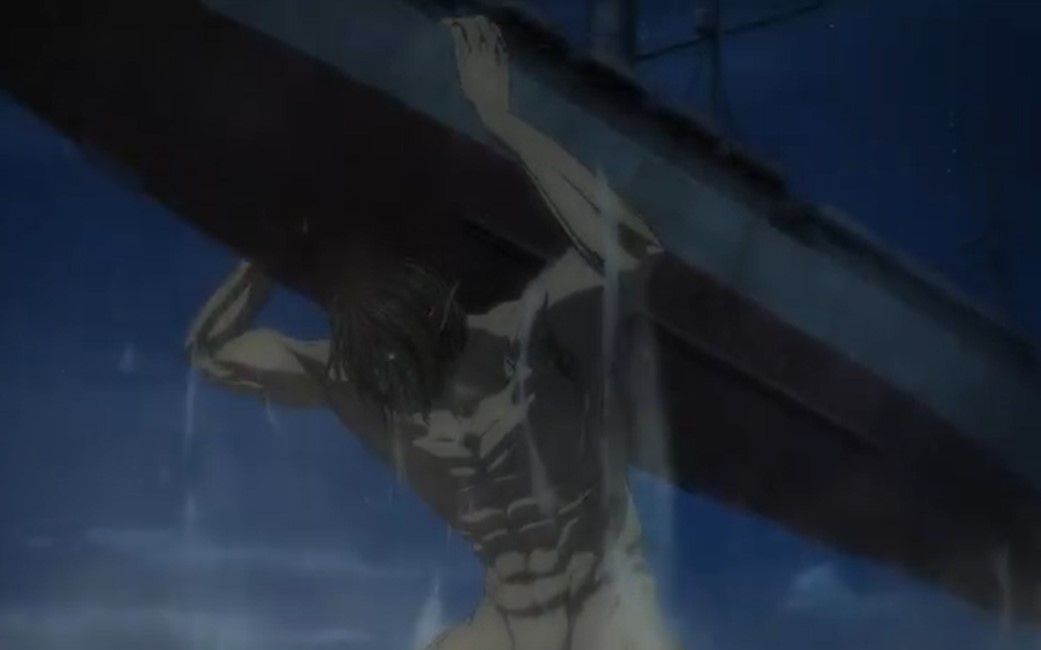 The War between Eldians and Marley’s has ended, but Gabi manages to take one of the Paradis Island Demons. Three years ago, the soldier reported to the captain that two hours have passed since the advance team landed, but no news from them. The captain replied that they can prepare for survey units 2 and 3 for landing now. He reveals that the island of devils defeated their warriors’ unit and threatens the world.

The captain vows that they must bring back whatever information they can get back to the Marley. Suddenly their ship got attacked below it, and the soldier tries to hang on for them not to drown inside the water. The captain noticed that the devil attacks the ship. Eren carries the ship outside of the water and put it on the sand. Hange greets the soldiers of Marley and welcomes them to Paradis island.

Episode 10 will be released on Monday, 15 February 2021, at 12:10 AM JST. Watch and stream Attack on Titan on Crunchyroll, AnimeLab, Funimation, and Netflix. Let visit the history of Yelena below. 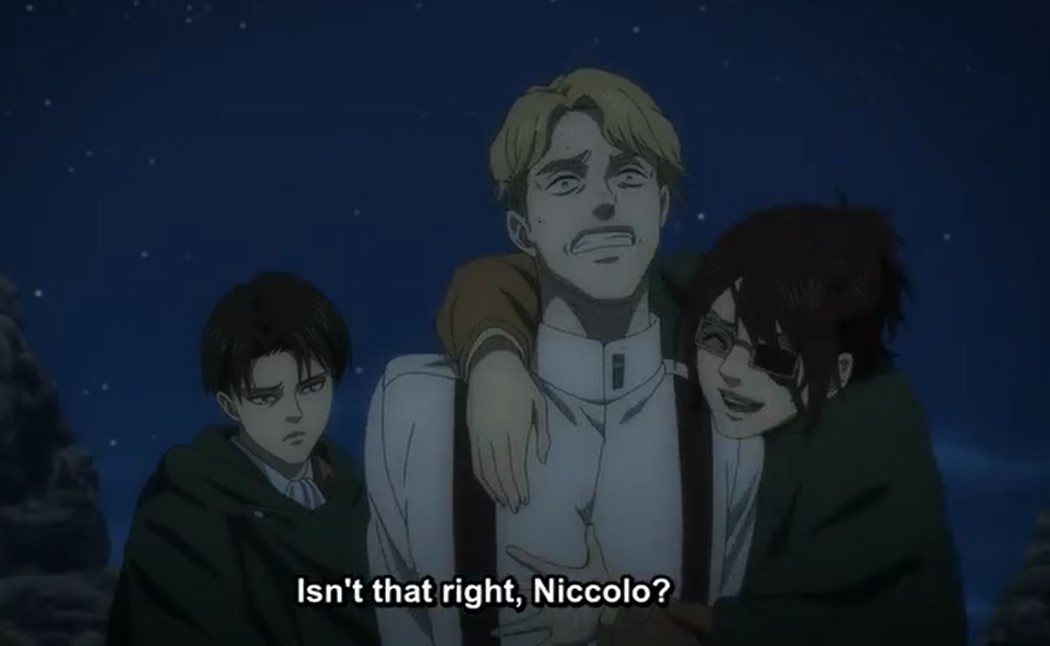 Hange comments that she is here to welcome their distinguished guest who has come from far away. She told them they could come and enjoy drinking tea and relax with them. Hange introduces the captain and others to their friend who they are holding as a hostage. She comments that he is the one who arrived at the island before the captain arrives with the others. Hange told the captain that they could ask Niccolo how they are getting along.

Niccolo yells at the captain to kill the devils, and he doesn’t care if he dies. Acker man is putting a sword on Nicolo’s back. Hange asks Nicoolo what he is saying since they are good friends. Ackerman comments that Niccolo is not interested in playing along with Hange’s stupid skit. The captain gets angry that Niccolo is being used as bait. He calls the devil to listen to him. The captain said the Marley lean no ear to words of those with defied blood.

The Captain said he has no interest in drinking pig’s water with tarnished bastards. Hange gets angry, asking him if he is sure that he can insult them like that. She asks him if he can not see that they have Niccolo. They must also know that there is an angry Titan behind them. The captain refused to give in and said they wouldn’t bend to the power of devils. When the captain wanted to shoot the Titan, he got shot on his forehead and died instantly.

Other soldiers ask Yelena what he is doing, and she points the gun at them, telling them topo throw their weapons away. They throw the weapons away, and other soldiers support Yelena since they cannot win against the Titan. Yelena told Hange that they accept her invitation. They can now enjoy drinking tea and relaxing together. Yelena looked up at the Titan and said, ”I have always wanted to meet you, Eren.”

The demon of Paradis island cannot believe that Yelena just shot her own ally to death. They are wondering what her goal is, or she might be on their side or planing something. The demons think that they will gain intelligence from Marley’s by talking with them. Eren comments that he is glad that they manage to talk and stop the Marley’s from landing. He thinks that if Marley gets serious, it won’t end up this smoothly. 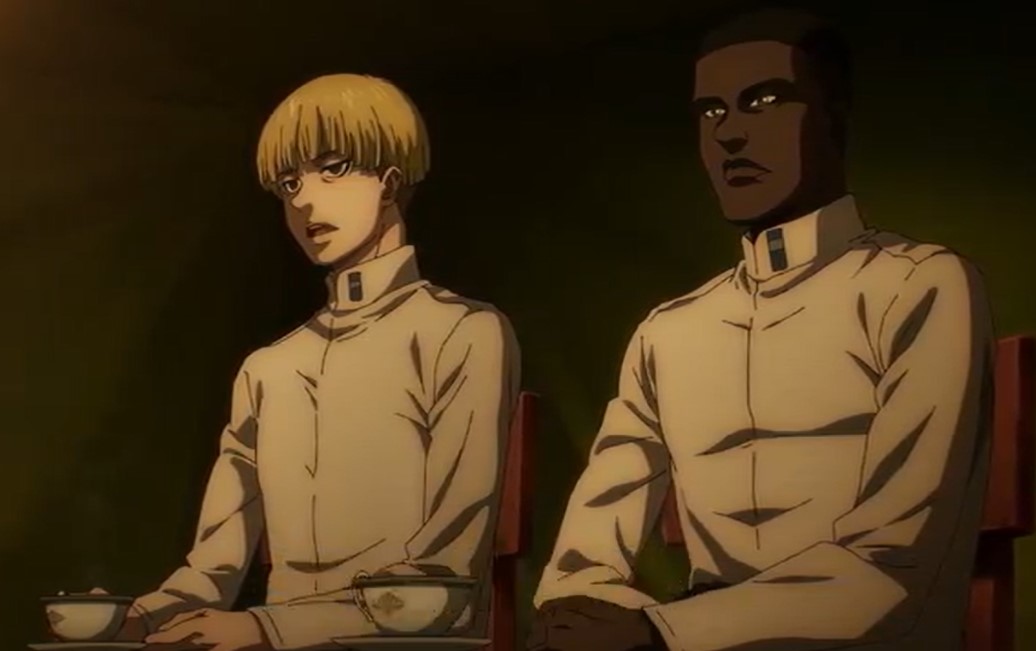 Eren comments that they must think something about the war between Marley and Eldians. While Akerman, Hange, and Yelena start with their talks. Hange is looking at the Marley weapon and finds that it is a good weapon. Yelena comments that it is a Marleyan solders standard equipment. She reveals that each Marleyans army divisions consist of about 20000 soldiers. There are 50 divisions in total, making around a million of them.

Yelena told them everything about the Marleyans to gain their trust. Yelena’s right man reveals that mobile weapons that can go beyond seas and walls can drop the enemies from the sky. Hange cannot believe that Marley has that wonderful power. She is wondering why the Marley has not landed a proper attack on them for almost a year. Yelena reveals that there are two more reasons beyond the Marley not attacking the island.

The pure Titans that the Marleyan unleashes on this island, their existence make it harder to arrive on the island with the latest weapons. It was originally a policy meant to confine the Eldians inside the walls. Yelena realizes that the Paradis demons are the ones who killed the pure Titans. She asked Akerman about it, and he asks her if she is going to tell the Marleyans. Yelena said she would keep it a secret.

Hange asks the second reason why they are not being attacked. Yelena reveals that Marley is currently in a state of war with multiple countries. Yelena reveals that she shot their superior under the order of Zeke Yeager. They are the Anti-Marleyen Volunteers who want to free the Eldian people. Back to the present, Yelena wants to free Annie. She is seeking some answers.

You can enjoy reading other latest development here: Attack on Titan Season 4 Episode 9.