Poster of Below Deck Mediterranean

Do you enjoy watching reality shows? Below Deck Mediterranean is one of the very famous reality TV series. The last or the 6th season of the show ended on 18th October 2021. After that, people were eagerly waiting for a brand new installment of the show. Finally, the series is back with the 7th season. The show has a very unique set that centers around the crew members. You will definitely enjoy watching the hurdles and solutions in their lives. Basically, it gives us a wonderful tour of the Mediterranean with the members.

This show originally premiered on 3rd May 2016 on its original network i.e., Bravo. Then releasing new seasons every year, the latest or the 7th season of Below Deck Mediterranean has already started streaming from 11th July 2022. The show has a rating of 7.4 out of 10 as per IMDb. It was also nominated for MTV Movie + TV Award 2021 for Best Docu-Reality Show.

Where and How can we watch Below Deck Mediterranean Season 7? What is this series about? Who are all joining the crew in this 7th season of the show? Who are the creators and producers of the series? When did the show premiere, and when will the next episode air? If you also have any of these questions in your mind, then you are on the right page. This blog will answer all your questions, and it also contains the other facts and details that you need to know about this show.

Where To Watch Below Deck Mediterranean Season 7?

Season 7 of the show is finally streaming on our screens. You can watch it sitting at your home and enjoy the tour of the Mediterranean. To watch the show, you have to connect to the original network of the series i.e. Bravo. The series stream on a weekly basis on Mondays at 8 pm EST on Bravo. You can also download the Peacock app and start streaming the full episodes of the series.

There are many alternative ways to watch the latest episodes as well. You can stream it through Peacock Premium, Fubo TV, Apple iTunes, Sling, DirecTV, the Bravo app, Tubi, and many more streaming platforms. Also, you can purchase the episodes from Google Play, Microsoft, Apple iTunes, or Vudu Fandango. The next episode of the season is going to release on 18th July 2022.

Where To Watch Below Deck Mediterranean Season 7?

More about Below Deck Mediterranean

Below Deck Mediterranean is an American reality TV series in the English language. It is the first spin-off of the show Below Deck. Mark Cronin, Courtland Cox, and Nadine Rajabi are the executive producers of the series. Also, Mark Cronin is the creator of this amazing show. Currently streaming is the seventh installment of the show i.e., Below Deck Mediterranean Season 7. The other six seasons of the series have a total of 102 episodes in all, with a running time of 42 minutes each.

51 Minds Entertainment is the production company involved. Every season of this show has its own Yachts. The Yachts include Ionian Princess, Sirocco, Talisman Maiton, The Wellington, Lady Michelle, and Home. Home is the latest one.

Every season of the series has a different set of cast members. The stars of Below Deck Mediterranean Season 7 include Sandy Yawn as the Captain, David White as Chef, Natasha Webb as Chief Steward, Kyle Viljoen, and Natalya Scudder as 2nd Steward, Raygan Tyler as Bosun, Storm Smith as Lead Deckhand, and Mzi Dempers and Jason Gaskell as Deckhand. 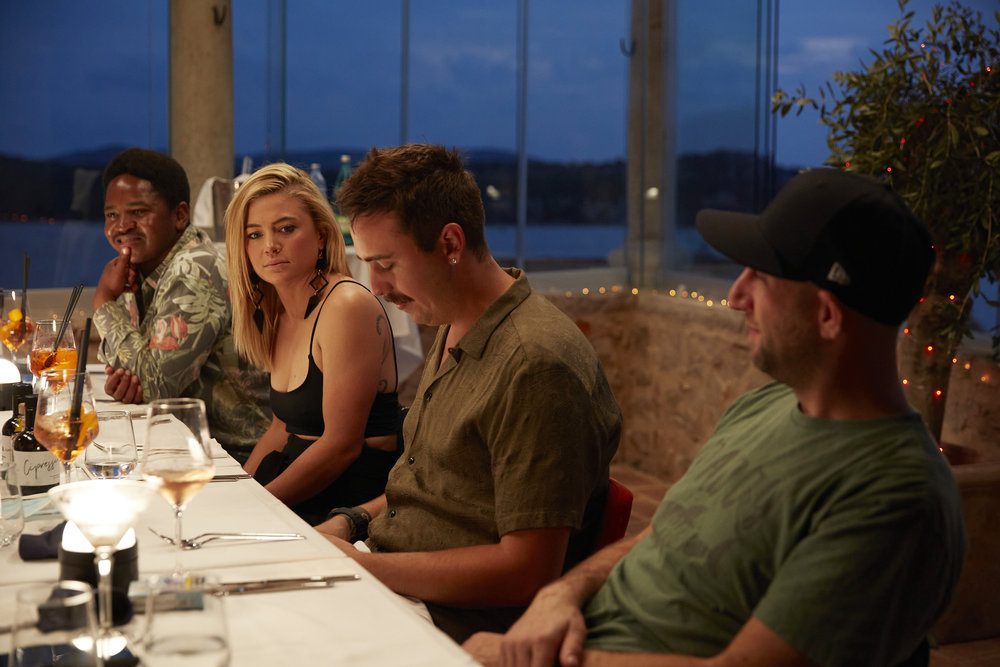 A scene from the show, Below Deck Mediterranean

The theme of the show: Recap

Below Deck Mediterranean is a famous reality show that revolves around the lives of the crew members. These are the crew members who work and reside aboard a more than 150-foot superyacht during a charter season. These places keep on changing during different seasons. The first season’s Yacht was in Greece, the 2nd and 6th seasons were in Croatia, the 3rd season was in Italy, the 4th in France, the 5th in Spain, and the 7th or the latest season has its superyacht in Malta. The seasons consist of filming for around six weeks, and the cast temporarily replaces the conventional crew. The plot contains many controversies as well as challenges in the lives of the crew members in the season.

Also Read: What To Expect From Below Deck Mediterranean Season 6?