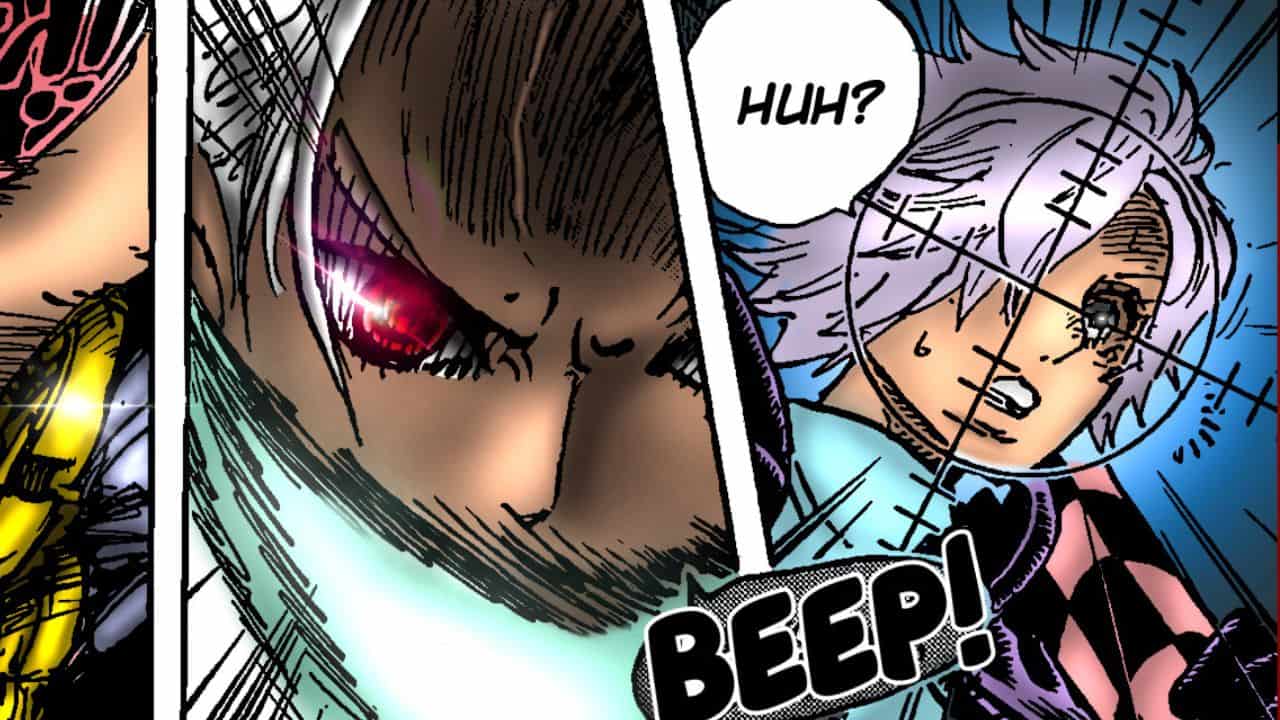 The full summary and the raw scans for One Piece Chapter 1073 are out and the chapter depicts three different events and tells us something outside the world of straw hats once again. With Stussy revealed as a clone of one of the former members of Rock Pirates, Buckhingam Stussy, naturally, the chapter did focus on her and the events regarding her as well.

If the events continue to follow her, then we might see Buckingham and Marco on Egghead Island as well. In addition to that, it seems like before getting out of the island, the straw hats and Dr. Vegapunk will have one more obstacle to get over and it is not merely easy as the CP0. The straw hats and Dr. Vegapunk are going to going to be greeted by the admiral Kizaru and one of the five elders is also on the way.

We have never seen the old men on an adventure and doing something actually but it seems like Oda is making them move and since the highest of the powers are on the move, we can expect something big to be revealed as well. That we will be seeing in One Piece Chapter 1074 which sadly will take its time to be released as Oda sensei has announced a break after the release of One Piece Chapter 1073.

One Piece Chapter 1073 is titled “Miss Buckingham Stussy” and the cover page of the chapter features the Mads scientists yet again. The cover page narrates Dr. Vegapunk showing his new invention of a weapon that shoots flowers. In the background, the reaction of Judge, Ceaser, and Queen is also shown where they seem disgusted at Vegapunk for making such a weapon.

One Piece Chapter 1073 starts where it left off in the previous one with the matter of the inner conflict of CP0. Lucci is pissed and surprised that Stussy is a traitor and goes to attack her. However, he cannot catch what seems to be Stussy as it is an illusion of her. It is revealed that Stussy can paper art abilities.

Stussy then brings out her lipstick which contains Sea Stones and taking the opportunity of the moment she bites Lucci from behind on his shoulder making him lose consciousness just like Kaku. Stussy admits that Kaku and Lucci are very strong and taking them head-on will end in her defeat thus she relied on such tricks. 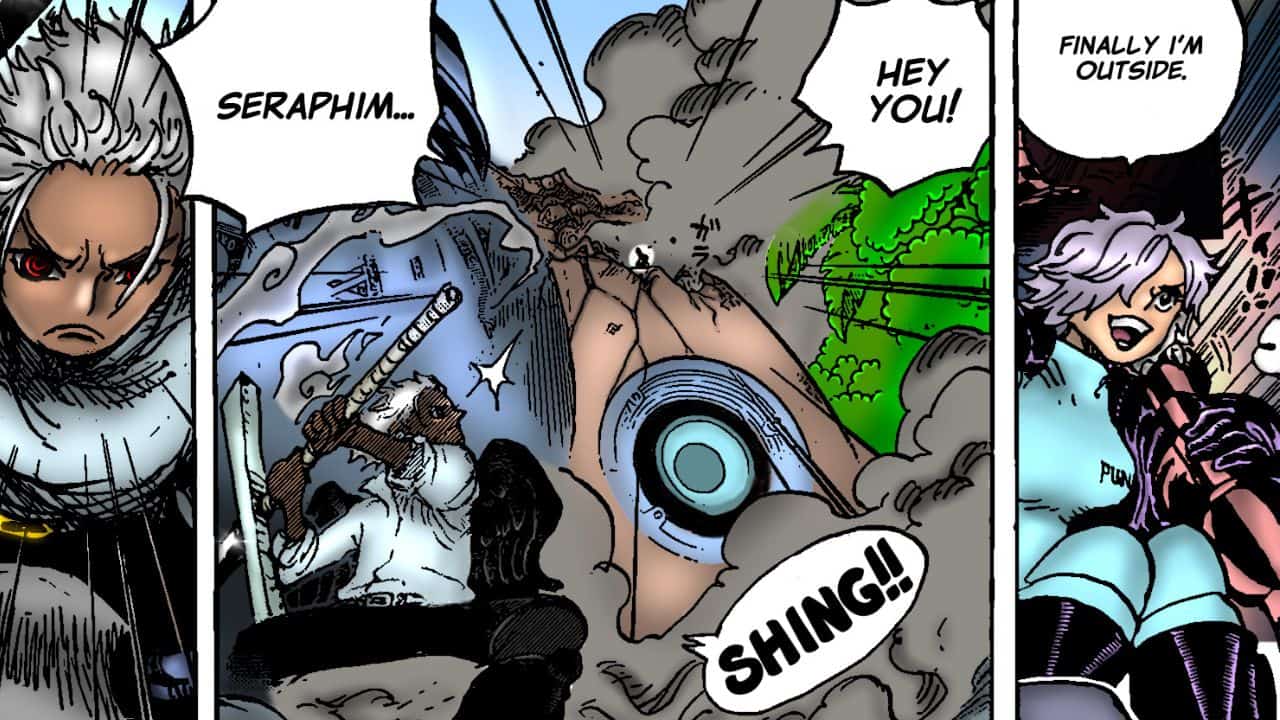 Zoro and Brook are confused watching what just occurred and wonder if there is inner conflict among the CP0 members. Stussy then uses a Den Den Mushi to inform Vegapunk that she has put both of them to sleep while Pythagoras treats York.

Zoro is curious about the Seraphim and asks Edison to explain the situation whereas, Stussy informs Shakka that she has put sea stone on Lucci and Kaku. Shakka thanks her for what she did and informs her that they are leaving the island and she should come along which agrees to much annoyance of the straw hats.

Meanwhile, we see that Luffy and Chopper are searching for the main Vegapunk and Bonney as they cannot leave the island without them. The author’s note says that an event is about occur on Egghead Island.

The Events At Sphinx Island

The chapter then shifts the narrative from Egghead Island to the new world on Sphinx Island where we see Marco being informed of the events by the children of the island while he was away. They inform him that the Marines came here looking for Whitebeard’s treasure forcefully behaving just like pirates.

The flashback of the events shows that the Pirates are holding the citizens of Sphinx Island at the gunpoint from the elderly to even the children who by the way are refusing to tell anything to the marines. The Marines are ready to shoot the citizens to get the information however, Weevil shows up fighting against the Marines.

The marines are surprised that Weevil is still present as the naval ship is not after him after the disbandment of the Warlords. The Marines retreat on the Ship and call the headquarters informing them about Weevil’s presence at the Sphinx island. Coming to the present, the children inform that it was due to Weevil’s help that they got out of that incident.

Marco is glad that Weevil was here stop the Marines however, Weevil’s mother makes an appearance at that very moment informing them that right after the marines left, the admiral Ryokugyu showed up and took Weevil with him to the prison.

Kizaru And One Of The Five Elders

One Piece Chapter 1073 shifts the narrative once again for the last page of the chapter where we at the distant sea a fleet of Marines and a navy ship. The marines give Kizaru tea and snacks after testing them for poison which the former makes sure of it. Kizauru says that he will deliver the snacks and orders the marine to stay back.

Kizaru comes inside one of the compartments of the ship it is revealed that tea and snacks are for one of the five elders. Kizaru asks the elder if he has met Dr. Vegapunk or not. In the last panel of One Piece Chapter 1073, the elder’s name is revealed to be Saint Jaygarcia Saturn who is deemed as one of the highest powers. Saint Jaygarcia Saturn tells Kizaru that he has met Dr. Vegapunk once way back and is disappointed with how things have come to be. 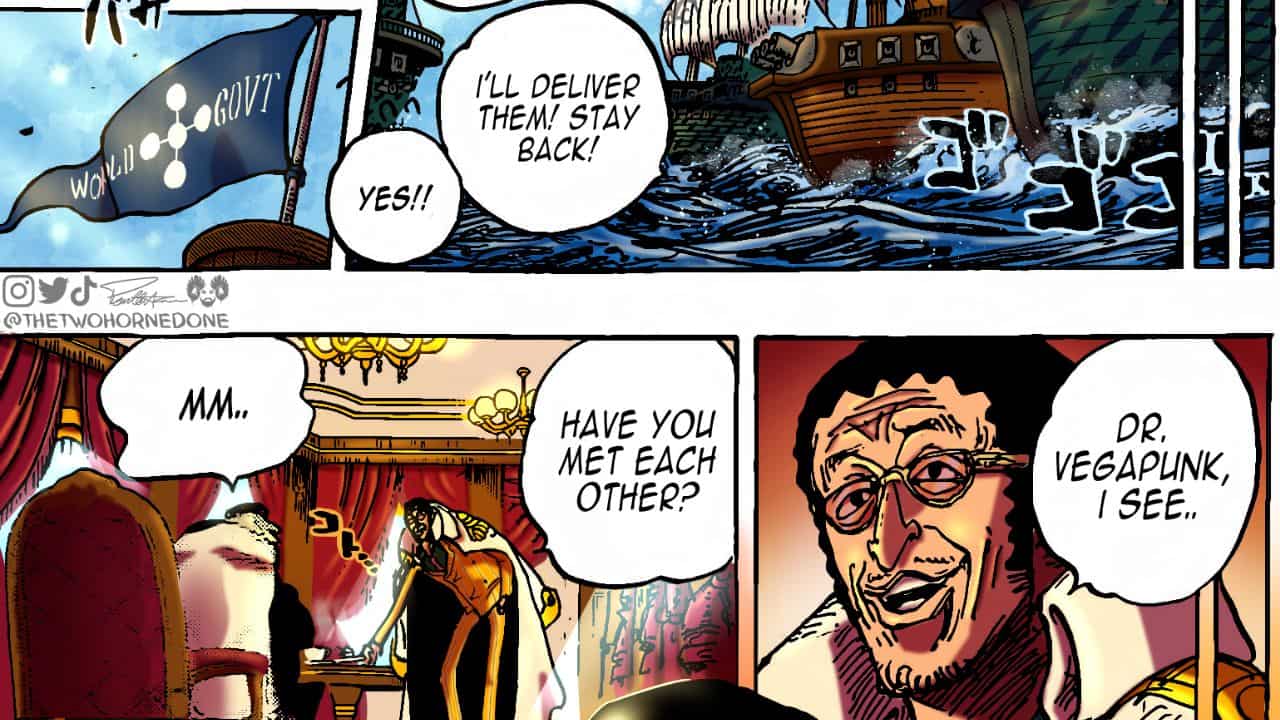 One Piece Chapter 1074 is expected to continue with the current events and we will probably see Kizaru with one of the five elders and the marines making his way onto Egghead Island. We are not sure whether it will be at the very start of the chapter or at end of the chapter, but the least we can expect them to arrive in the straw hats and Dr. Vegapunk is ready to leave.

However, before all of those events, we are expecting to see Bonney and Dr. Vegapunk as well. One Piece Chapter 1073 did not highlight them but the last we saw of them was Bonney had discovered what seems to be memories of Kuma. One Piece Chapter 1074 will show us a lot of exciting events but as mentioned at the very start of the article, we will have to wait more than a week as Oda is taking a break.

Also Read: What Episode Does Roronoa Zoro Lose His Eye In One Piece? Theories & Facts