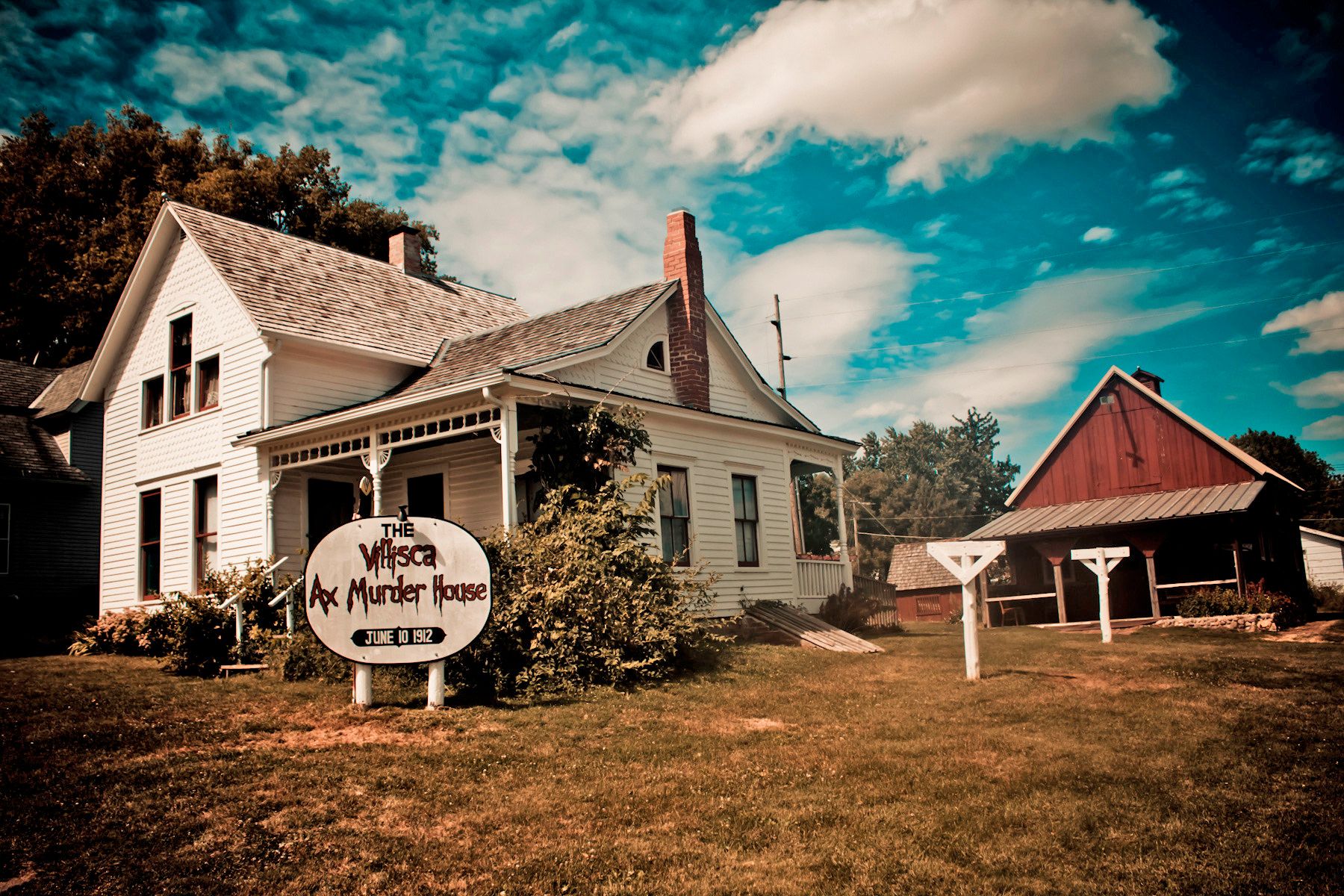 The Moore house in Villisca is now a haunted destination

Everyone has enemies. Some prefer evading our replies, while some actively spread rumors behind our backs. Haters are going to hate, wellness experts say, so live your life. What if it does not stop there? What if it is just the beginning of an evil downward spiral? A fairly huge doll-like house lies in Villisca of Montgomery County of Iowa. From afar, it looks decent and beautiful, and when you go nearer, you will know that it is the most famous tourist destination in all of Iowa.

It functions as a hotel. For a little over $400, a group of six or fewer can book an overnight stay in the dainty hotel. Once the payment is made, the Manager gives the guests the key and leaves them alone for the night. The guests are recommended to bring their sleeping bags. What is so special about this building that people are paying to enter this ill-provisioned dwelling?

The house belonged to the Moore family 110 years ago. A Josiah B. Moore with his wife, Sarah, and their 11-year-old son Herman Montgomery, 10-year-old Mary Katherine, 7-year-old Arthur Boyd, and 5-year-old Paul Vernon were a well-respected and rich family in their city. They were a happy family. Happy until their smiles were forcibly wiped off their faces forever. They slept one fateful night and never woke up again. All but for one. But that little one, too, was put to sleep.

Mary had many friends, the Moores had a good name in the community, and the townsfolk were happy for their children to play with little Mary. But her best friends were the Stillinger sisters, who often stayed over at the Moore residence. On the 9th of June, 1912, too, like always, Mary invited Lena and Ina to stay at her house. The girls asked permission from their parents and came over with their suitcases to spend a few days with Mary and her siblings. Josiah and Sarah were a kind couple who were good friends with the Stillingers and were always delighted to have the sisters at their house. The Moore family and the Stillinger sisters

In the evening, the Moore and the Stillinger sisters participated in the Children’s Day Program at their Presbyterian church. The service was coordinated by Sarah, and Reverend George Kelly presided over it. The service ended at 9:30 in the evening, and by the time the lot reached the house, it was after 9:45. They had their supper and prayed. At around midnight, Sarah and Josiah retired to the master bedroom, the Moore children to their room, and the Stillinger sisters to the guestroom downstairs. Everything was well, they had their fill, and they slipped into their dreams. Little did they know their dreams were to morph into nightmares.

The next dawned, and Mary Peckham stretched out a bit and came out of her house to begin her daily chores. Mrs. Peckham was a great neighbor and a good friend who found pleasure in her morning conversations with Sarah. She peeped over at Moore’s residence, but the windows were drawn, and the house was as quiet as a dormouse. She remembered Sarah talking about the Stillinger girls coming over and thought to herself that the family must have slept late in the night. She got to her work.

At about 7 am, she took another glance at the daunting house, and uneasiness crept into her bones. She had known the Moores as long as they had been and were not the ones to start their day any later. She lifted her gown and strode to the Moores’ door and knocked. None answered. She knocked again, but the silence persisted. Worried that they were sick inside, Mrs. Peckham let out their chickens from the backyard and brought Josiah’s brother, Ross, over. 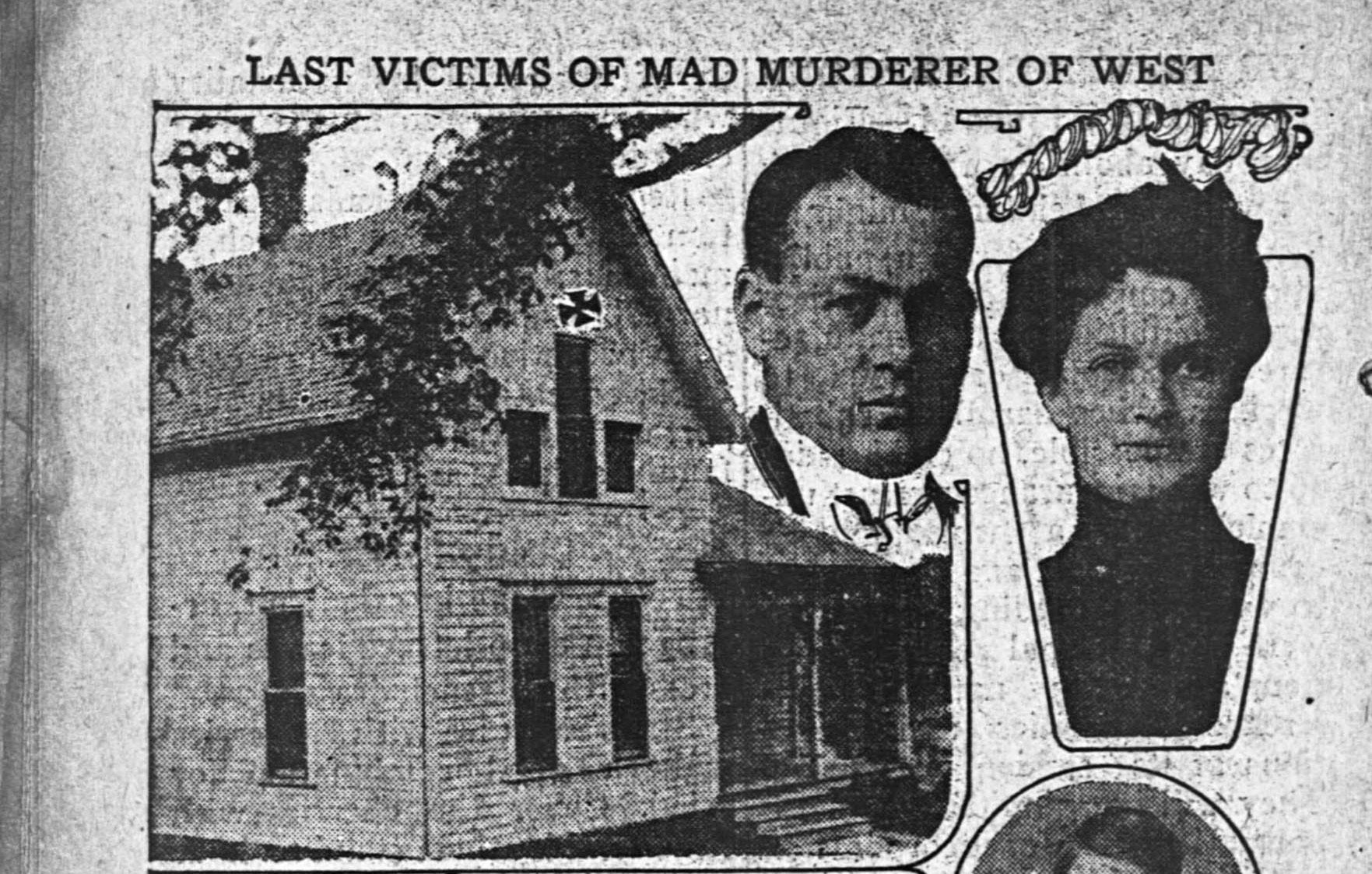 The Villisca murders were published in the Iowan newspapers.

When Ross knocked for the last time, and the Moores kept quiet, he made his way in with his spare key. He looked around, and the house was left asleep, so he went to check the parlor. Seeing that the parlor was empty, too, he opened the door to the guestroom. His eyes grew wide, and he yelled to Mrs. Peckham to call for Mr. Henry “Hank” Horton. 8-year-old Ina Mae and 12-year-old Lena Gertrude lay dead on their beds with their skulls broken to pieces. The Peace Officer quickly arrived and inspected the whole house revealing a 43-year-old Josiah and his 39-year-old wife and all their prepubescent children with similarly bludgeoned heads. An axe that belonged to the master of the house lay on a table in the guestroom with a 4lb slab of meat next to it.

Also Read: The Unfamiliar Sound Julia: Everything We Know

Further investigation found two snuffed cigarettes in the attic, meaning the killer had access to the in and outs of the house and was waiting for the family to go to sleep before he attacked. The autopsies declared the murders were committed between midnight and dawn. The windows were covered with aprons and clothing to shun curious passersby. The killing started with the Moore and then moved to the rooms of the other children.

The last to die were the Stillinger sister, especially Lena. The investigators suspect that the older sister was awake when she was being attacked, unlike the others who died in their sleep. Her body was found lying crosswise. Her nightgown was drawn back, and her undergarment was missing. She even had a wound on her arm, unlike all the others showing that she fought back when the predator molested her before killing her.

The patterns of the cuts on their heads and their impact revealed that the blade of the axe was used only on Josiah, and the rest were murdered by fewer blows with the back of it. Josiah’s corpse was the most violently attacked as his head broke in half, and his eyes were smashed into nothingness. His blood had splattered all over the floor and upon the roof. After the brutal massacre, the killer(s) had covered the butchered heads with clothing and took out a large piece of bacon from the icebox before laying the murder weapon beside it. They were bloody water and untouched food in the house, but absolutely no fingerprints. 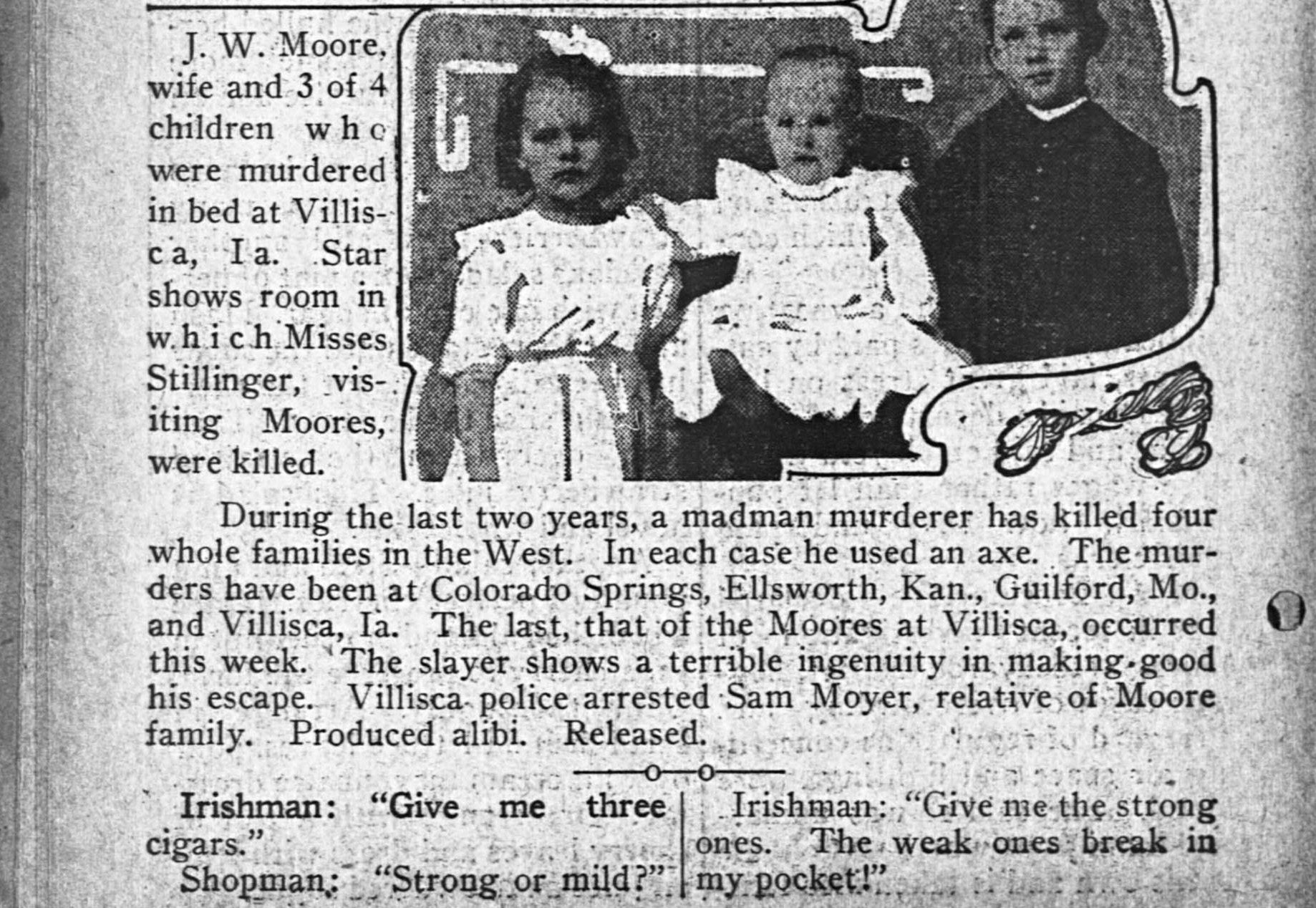 As the tension grew, many suspects were brought to trial, the most notable being the Minister and a mercenary. Kelly was a Reverend noted for being a peeping tom rather than a priest. He was a troubled adolescent who grew up to be a perverted old man. Many women and girls have accused him of asking them to strip themselves naked in front of him. Kelly’s departure from Villisca on the 10th of June 1912 between 5 and 6 am made him the perfect suspect for the crime. He even confessed, but the police did not believe the man who was so obsessed with the morbidity of the killing.

The jury suspected that the man was hallucinating his involvement in the case. In 1914, Kelly was arrested and put into St. Elizabeth’s Hospital for his obscenity towards his prospective secretary. In 1917, he once again confessed to the Villisca murders, but the jury acquitted him as they believed his confession was coerced.

Some say a hired hand killed the Moore family. William “Blackie” Mansfield was a mercenary whom, the crime fanatics think, Senator Jones hired to finish the Moores. Any axe murders occurred during the time of the Villisca murders. Colorado, Kansas, Ellsworth, New Orleans, and Illinois had seen their share. All the axe murders were remarkably similar. After Mansfield butchered his wife, child, and in-laws to death with an axe in Blue Island, he became the prime suspect in every axe murder. He had a foolproof criminal record that stamped him as a cocaine-addicted killer.

According to Detective James Newton Wilkerson, Mansfield had to be the one since out of all the suspects, he was the only one who needed to worry about not getting his fingerprints on the crime scene since the Leavenworth federal military prison had his on file. But he insisted he had an alibi, payroll records of Illinois seemingly proved his absence in Villisca, and he filed a case against the detective and won $2,225. The Detective swore to the papers that it was all the Senator’s ugly plan to save himself. An Iowan restaurant owner, R.H. Thorpe, claimed that he saw the hired axe walking for Villisca and catching a train to Clarinda at the time of the murder, but it was never proven.

Still, others blamed a mysterious traveling immigrant called Paul Mueller. Muse to the 2016 horror film “The Axe Murders Of Villisca“, to this day, the killer(s) of the Moore family were never held accountable for their dreadful act. I think it was Ross Moore who committed the murders. He had the motive—the estate. He knew his brother’s and his family’s sleep patterns and food habits. He knew the attic and had a spare key. The brutality that was displayed, especially towards Josiah, implies a personal grudge which being his brother was most likely for Ross. But who do you think did it?