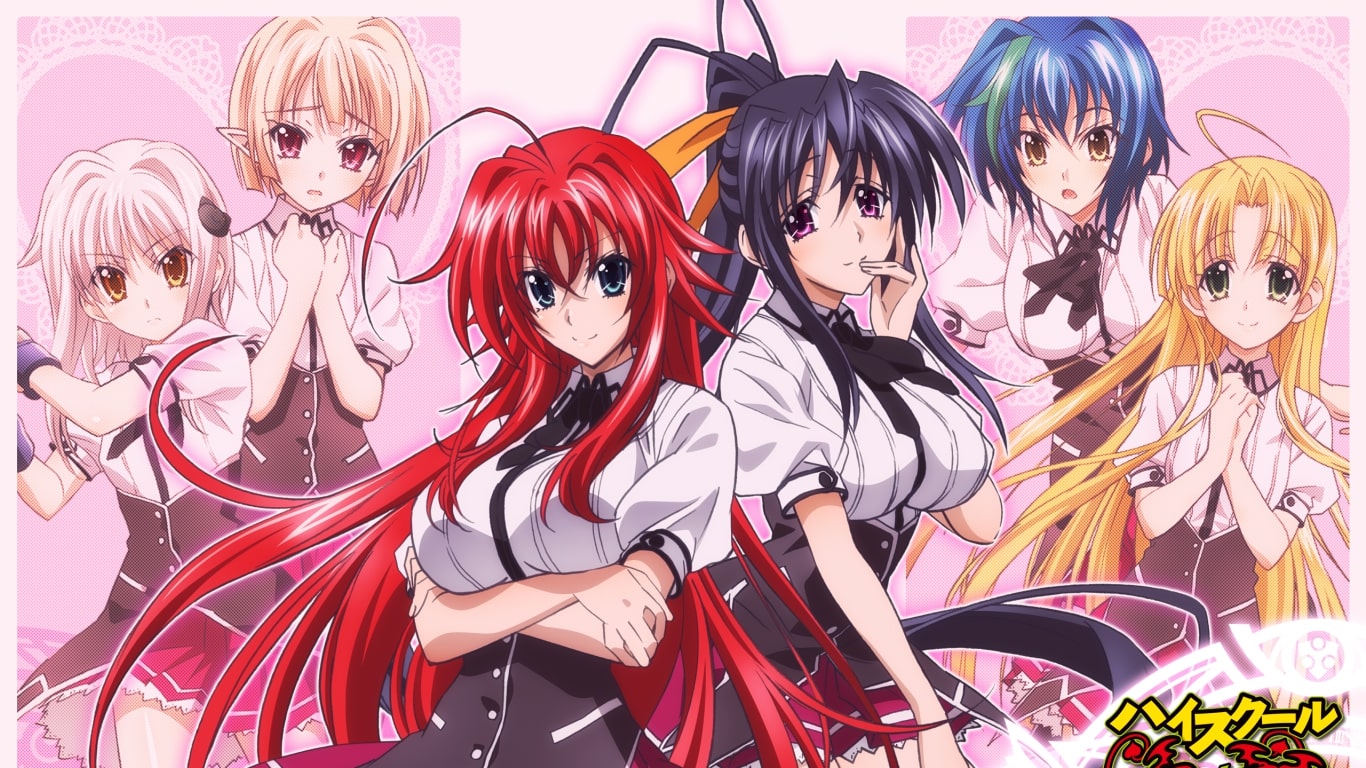 The field of anime continues to grow every year, as we see it become more and more popular around the globe. Anime is an animated series that is usually produced in Japan and features intense emotional storylines for characters in the series. For many viewers, the beautiful female characters in these shows are the key attraction together with the strength of the storyline.

She’s cynical, a bit bossy, certainly a tease, and she’s got a pension of hopping around in a bunny outfit. Not your usual waifu. But then, in the silent moments, she’s telling you to try it out. She’s taking care of your little sister. She prepares an unsolicited meal for you. She’s only finding time to come to see you in person in her crazy showbiz life. She has a huge spirit, and she’s going out of her way to support people, even though it’s not her responsibility. And all of a sudden, you can’t help but fall for her.

Erza may not be the usual girl, a domestic waifu, but she’s definitely watching out for the ones she cares for. Her tremendous physical strength is balanced only by her ability to defend the ones she loves. In spite of her sketchy history, she found a family inside the guild that reciprocates her affection (along with a strong dose of terror at times … but whatever) and would do everything, even risk her own life to save her own. This is waifu stuff now.A brave knight who crawled from hell and made it to the other side in one piece. It’s like the great wall of China on the outside. Solid, powerful, solid, and well-guarded. Within, she’s got insecurities that come from her terrible experience, but she’s able to embrace it and press on with her head held high. And it doesn’t hurt that she’s no less stunning in red hair.

I mean, I mean that. You’re still scratching your head a little on this one, given that it’s not just the devil, but also the queen bee of the self-proclaimed King of Harem. But apart from being hot, there’s one Big reason Rias makes the list: Confidence. Most of the time, she’s not annoyed by the advances of the lesser members of Issei’s harem, and most of the time, she has the chill factor going on. And if she gets worked up physically on occasion, most of the time she lets Issei do her thing and never lets her get unsafe. Trust, trust, and loyalty? They’re both synonymous with waifu

Maki Oze is one of the younger anime waifus in the industry (since 2019). A girl who knows how to fight because she’s trained in the military, trains, works, and is always as feminine as a flower. “Cute” stuff takes her to her knee, but disrespect won’t be tolerated. She’s going to crack some threats at the drop of a hat because she has a lot of self-respect.

She’s the real waifu. And happily for us, since she’s a multimedia heroine, she can be everyone’s waifu at the same time, and nobody needs to be jealous of Kirito (even though we’re still deep down …). Asuna is loyal, kind, clever, funny, and optimistic, with just enough attitude to make things exciting, but not enough to be a buzz. She’s a stellar chef, “a floor-clearing badass,” as Kirito once said, and she can also circumvent GM’s paralysis codes with the pure willpower of her passion. Dang, guy. Now, this is a lady. Oh yeah, and she’s really wealthy.

Asuka is one of the most famous female characters in anime history in the 1990s, dubbed the Neon Genesis Evangelion. She’s an enthusiastic, proud, kind-hearted kid. She appears to be searching for other people and her mates. It is designated as the Second Child and Pilot of the Evangelical Unit 02. She is native to Germany, but through her aunt, she has an American nationality. She speaks fluent German and Japanese, opting to swear in German. She’s a child prodigy, and she even got a degree at a very young age.

Often named by her real name, Rebecca Lee is one of the most badass characters in anime history and is the heroine of the Black Lagoon. She was also referred to as “Two Paws” for her gunning skills by using both her paws, and she is experienced with weapons and other handguns, capable of dodging bullets without sweating. She is of Chinese-American descent living in Manhattan, Chinatown. We’re just getting to know some of her histories through memories of how she’s got her talents in this line of work. She’s a founder of the Lagoon Company.

She is widely regarded as Major and the main character of the Ghost in the Shell franchise. She is a cyborg who serves at the Department of Anti-Cyber Crime of the National Public Safety Commission of Japan. She is one of the most popular female characters in all cultures. She is highly intelligent and known for her tactical tactics and hacking skills. Her first appearance in the Ghost in the Shell anime movie is now one of the strongest introductions of a female character that will be given a whole new franchise later on. She also had a live-action adaptation starring Scarlett Johansson in 2017.

Mikasa is one of the characters of Assault On Titan who doesn’t talk much and stay quiet throughout the battles. She has been through PTSD since her biological parents have been murdered by horrific killers, and who can forget that she still lives with titans. She’s a member of the Survey Corps. Most of the anime fans knew Mikasa well before 2019, but because Attack on Titan is still going on, it’s worth noting. Mikasa is a mighty warrior determined to defend her brother Eren and kill the Titans-but as the world around her gets more complex, so does her target.

Misaka Mikoto was originally just one of the main female protagonists in Toaru Majutsu no Index, but she then became the main heroine when her plot was extended to Toaru Kagaku no Railgun. She is a magic user whose power, named Railgun, includes producing and controlling electricity, prompting Kamijou Touma to coin her nickname Biri-Biri. During her elementary days, she was considered a child prodigy, climbing the ladder fairly fast and winding up as a level 5 spell by the time she was in middle school. Her degree, as well as her academic excellence, gained her another nickname: Tokiwadai’s Ace.

Honami is a Class 1-B delegate in the Prestigious Classroom. She’s gorgeous, intelligent, and artistic, but she’s not one to brag about it at all, and instead, she’s treating everyone fairly. Despite being in the upper section, unlike her peers and others, she’s sweet to everybody, even those in the lower sections. She’s kind, trustworthy, playful, and rarely gets mad, but shows a serious side of her when it’s needed. Her compassion and neutrality were seen when she avoided competing with two lower parts, and her shy side was shown a little after she had received a letter of affection.

When we see Annie for the first time, she’s a stoic badass and member of our main military police force. Skilled in mixed fighting and motivated by a deep, if lonely, determination to survive. We’re led to assume she’s going to be a key combatant asset. That is, until she turns into a Giant and destroys all of the best human beings she has to give against the enigmatic monsters. She ‘s quick, capable of turning her skin into a crystalline powder that can deflect almost anything, and maintains her battle skills, rendering her a merciless opponent.

She is one of the heroines of the series, considered to have the greatest palate in the world. Her beauty is very distinctive, with purple-pink eyes and dark, honey-blonde hair rising to her lower back. According to the other characters, Erina is known to be the most attractive girl. Since she belonged to a rich and noble family, Erina came off as a privileged girl. This purple-eyed beauty has control over everyone because of her talent and personality. Her haughty attitude is keeping her from making friends. Because of her rich heritage, she’s not doing her own job at the outset, but she discovers everything as time passes.

Nami is one of the smartest members of the straw hat, a war orphan. The heroine’s waist-length, orange hair is swaying along with the ocean breeze as she navigates. It is relatively tall and has bright brown eyes. Nami marks her loyalty to the Arlong crew with a tattoo that was later replaced by a blue-colored pinwheel and mikan, a tribute to Bell-mère, Nojiko, and Genzo, respectively. Her features have evolved as the piece of art has shifted. She is also seen changing her hairstyles and wearing various t-shirts with four-letter words like gold, evil, or mace.

In the anime, Violet is a beautiful and charming teenage anime girl who almost looks like a doll. But, in fact, she’s the latest Auto Memory Doll in the CH postal business. This anime girl was wearing a lovely golden hair and stunning light blue eyes. So, in the story of Anime and Manga, this sweet girl only needs to know the meaning of “any words” she got from Gilbert when she was a soldier.

She is a pure-blooded devil chick, and she is also the main heroine of the series. Its look is very bold, with light skin and blue-green eyes. Rias also has an appealing body, which at once draws everyone’s interest. Her long crimson hair is like a cherry on the top of the tart, making it even more distinct. She has a very kind, caring, positive disposition. Any display of cruelty in front of her enrages her and sheds light on her fiery side. She’s very proud of her family name, but she hates it when her life is affected by it.

Lucy is a 17-year-old Mage, very secure in her looks. Her blue eyes and her shoulder-length blonde locks, when either let loose or held in a ponytail, make her look charming. She can also be seen wearing black leather high heel boots. Although her demeanor often appears superficial, she happens to be a smart, kind, and sincerely loving person. Literature is her favorite subject, and she’s writing her own novel based on the adventures of her childhood. Like any other normal girl, she loves shopping and cooking.

This female character has a slender figure, and it looks very short because of its height. She ‘s got long , white hair, and all these features give her a dainty appearance. Her big blue eyes make her face pretty. Owing to the unfortunate loss of her sister, her personality changed profoundly, and she lost all her strength to fight. She’s scratching all the right boxes. And even if she tends to be “too sweet” to her own benefit, she’s not the sort to take advantage of. Or don’t stand up for yourself. Which is another nice characteristic of Mirajane Strauss. Make her a waifu deserving of the list.