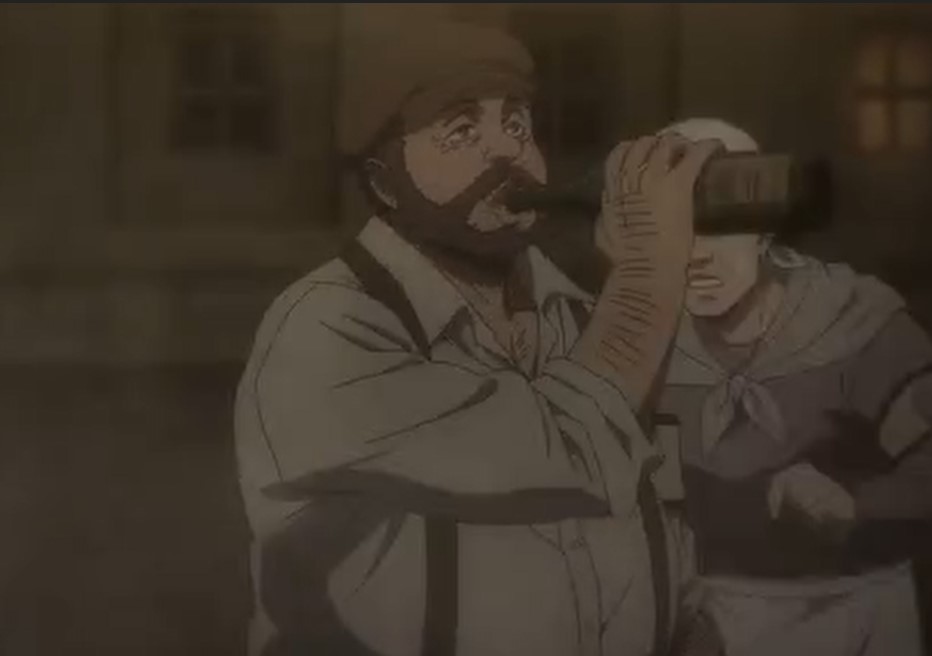 Krugger’s real name was revealed, and he explains everything in front of Falco and Braun. Braun finds that Krugger is Eren Yeager. Eren wants to get revenge on the Titans who killed his beloved family member. Falco also finds that Eren was using him to deliver his letters so that he can gather his allies. Eren was pretending to be paralyzed so that his plans would not be exposed. After the truth was revealed, Eren transforms into an armored titan and charges towards where Willy is addressing at the stage.

Before Willy finished his speech, an armored titan appears, causing chaos, and it shocked other soldiers and the high-ups. In his armored titan form, Eren slaps Willy and puts him to sleep, and he then devours him, which surprised Magath. Magath realizes that he formed an alliance with Willy before Eren ate him. Earlier, Magath said that the Marleyans are demons and the Eledians are descendants of demons. The two shakes hand and allies.

Attack on Titan Season 4 Episode 7 will be released on Monday, 25 January 2021, at 12:10 AM JST. Make sure to convert the time to get the latest episode as soon as it is released. Visit this Anime’s website at shingeki. Tv. Enjoy watching this Anime on Crunchyroll, AnimeLab, Funimation, and Netflix. Let us find what the updates have to offer below.

Everyone inside the building started running, and Sophia is under a pile of huge rocks. Colt tried to protect Gabi and Udo, scared Gabi screams, thinking that Sophia might be dead. Eren started to destroy everything and killing all the soldiers inside the building. Magath is just shocked, and he is not wondering his crew to attack. Willy’s sister said that Willy had done a great job. She got fired up and transformed.

Eren saw the light, and the Warhammer Titan emerges from the light and receives a blow from Eren. Eren pin the Warhammer Titan to the ground and started showering her with blows. Koslow tells reports to Magath about the incidents that are taking place. He reveals that the Warhammer Titan is losing. Other tells him that Marshal Calvi and others with him have been wipeout. Magath just stands and watches Eren destroying everything.

The soldiers’ comment that they have to get out her and evacuate everyone. Magath kept quiet and aimed to shoot Eren. He fires a single bullet that made no impact and said it was not better than a peashooter. Magath said that the first shot of Marley’s counterattack had been fired. He also said he never expect such a grand entrance from Eren. Eren continues to shower Warhammer Titan with blows as other watches since they can not do anything.

Magath reveals that judging by Eren’s appearance, he is the one who stole the founding of Titan, the Attack Titan. He also said that Eren Yeager himself had paid them a visit, but he saved the trouble of going to the island. Magath orders everyone to get back to their station and prepares for battle. Eren is venting his anger on Willy’s sister, who transformed into the Warhammer Titan. He is showering her with blows that her brother has ruined his name and reputation.

Warhammer Titan fires back by winking her right eye and unleash an attack that spears Eren with steel. An old geezer who was drunk at the bar kept on drinking, and the house got destroyed. He drinks two sips asking what that commotion is all about. His wife noticed that, but when she tried to grab him. He got hit by a huge piece of building that smashed his head with the ground. Eren opens his eyes with a steel spear on his stomach and smiles.

Colt and Gabi are now rushing to the hospital holding Udo, and Colt yells”Falco where are you.” At the same time, Falco gets the news that two Titans are fighting at the building above. Warhammer transforms again and summons her hummer that sends Eren flying. When he lands on the ground, his legs got spiked, and Magath’s crew started firing titan cannons. Koslow notices that the attacks are working and suggest that they must finish Eren now.

Magath replies that if they kill the founder, their plans will get delayed. Magath said that they have to feed Eren to the Warhammer no matter what it takes. Koslow said that it does not look like the Warhammer wants to eat him. She is aiming to avenge her brother Willy who was eaten by Eren earlier. Warhammer landed a blow that destroyed armored Eren, and he gets back to his real form.

She asks him if he has any last dying words, and Eren said, do it now Mikasa. While Warhammer wanted to land the finishing blow, Mikasa interfered and started to attack Warhammer. Erens’s allies showed up and started to attack everyone. They manage to put Warhammer to the ground, and Mikasa talks with Eren. She asks Eren to come back home, and Eren replies that it is not over yet.

The two teams up to destroy Warhammer, who has just revive after being taken down. Udo and Sohpia lost their like, and Gabi said she is returning to look for Falco. Eren manages to take down Warhammer, and he was about to devour her body, but another Titan appears. It is Falco who started to battle Eren and Mikasa. Falco realizes that he is fighting with the demons of Paradis Island.

Gets other updates of the episode here: Attack on Titan Season 4 Episode 6. That was all about the upcoming episode’s recent development; keep in touch to get new updates when a new episode hits.