What is Milk Snob’s Net Worth? Yes, we are talking about the baby seat-cover maker founded in 2012. Melanie Disbrow, mother and entrepreneur, started Milk Snob after she faced problems protecting her kids from the sunlight. Whenever she covered them with blankets, they would fall off the stroller, leaving them exposed. She reflected on all the trouble she faced as a working mother and how she could help herself and other mothers by providing a solution.

When she couldn’t find anything suitable for her requirements, she thought of making one on her own, leading to the foundation of Milk Snob. The brand’s primary product at the time of launch was a breathable, multipurpose car seat cover. It picked up the pace, and mothers loved it since it made caring for their children much safe.

The idea became so popular and profitable that it got the chance to appear on Shark Tank. Originally from Germany, Melanie moved to the USA with her husband and three kids. Building a brand in a new place and unfamiliar country only depicts her hard work and will. From being a mother in a new country to a successful entrepreneur, her journey with Milk Snob is full of motivation. Therefore, we will see how she did it and where the company stands today.

Melanie sewed the first-ever Milk Snob child seat cover in her living room. And she sold them through Instagram connections; she did it long before our generation learned to monetize skills on social media. The official foundation year of Milk Snob is 2015 on most online reports, but according to Melanie’s LinkedIn profile, she has been the CEO since November 2012.

If we keep in mind the numbers she talked about on the Shark Tank stage, it seems more reasonable to believe that the company began in 2012. Though she was doing good, to get into retail, she needed publicity, investment, and support from experienced professionals, who better than the Sharks? Let’s see how her Shark Tank journey was.

Melanie pitched Milk Snob in Shark Tank Season 8 Episode 8, which aired on November 11, 2016. She expected $125K for a 5% stake in her business. Melanie disclosed her numbers to the Sharks – $1.2 million in the last 18 months and $800K in the past five months. And after learning that she managed all the sales through social media, the Sharks were intrigued. 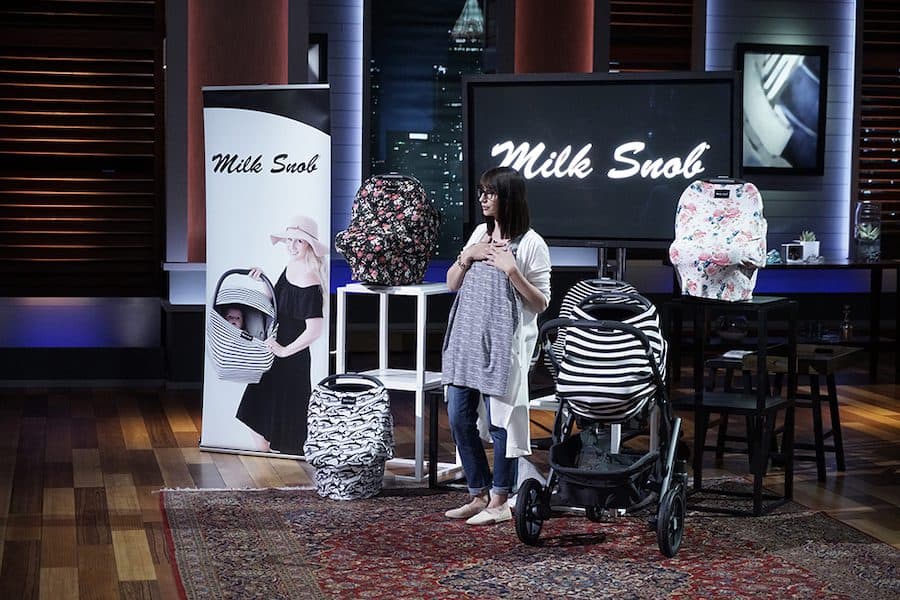 Each cover cost her $7.60, and the selling price was $36, a large profit margin. Tending to the impressive numbers behind the idea, Chris Sacca offered $125K for 8%. Mark Cuban walked out since he couldn’t place a better deal and even asked her to take it. Lori showed interest by offering $125K for 10%, but Kevin crossed her with a better deal – $150K for 10%.

Melanie presents a counter to Lori – $125K for 8%, but Lori is thinking. At this point, Chris presents the idea of joining Lori and taking the deal together, but because of varying thoughts, he drops the plan and walks out. The entrepreneur irritated Kevin by turning a blind eye; hence, he dropped out. Lori counters Melanie’s offer with $150K for 10%, which she accepts.

Milk Snob’s Net Worth And Growth

Milk Snob’s net worth hasn’t been reported by any sources yet, so it is hard to tell how much the company has made. As of December 2022, the estimated annual revenue of the company is $6 million. Milk Snob has grown a lot and is a trusted and reputed brand, as mentioned in prominent sources like Inc., BuzzFeed, USA TODAY, POPSUGAR, and many more.

Milk Snob has come a long way from just making covers; they offer a variety of baby products like – Blankets, Footed Jammies, Sleep Bags, and Pacifiers, among several others. Though it’s been more than 6 years since it first appeared on Shark Tank, the Original 5-IN-1 covers are still available for $36.99.The company has made deals with Disney, Star Wars, and Jeep to launch stylish, and generational items.

The current headquarter of Milk Snob is located in Richardson, Texas. Their products are available online on Amazon, RockYourBump, and more sites. Besides managing the business, they are also great at managing their Instagram, Facebook, and Twitter, providing updates at regular intervals. Let’s hope they keep up and provide affordable helping mothers take care of their kids.