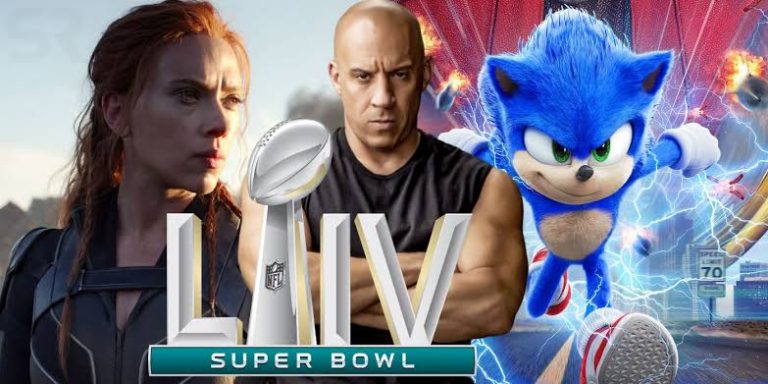 All upcoming ‘Super Bowl 2020’ Movie Trailers, Release Date, and All We Know

Fans have already received the movie advertisements along with trailers of other movies like Black Widow, Fast and Furious 9 and others. Talking about the movie trailers, they will come with the Super Bowl ads, which are more expensive than the actual films. According to reports, just a 30-second ad spot cost $5.6 million. The full budget of the movie moonlight is $1.5 million.

The trailers can be seen on Amazon Prime‘s Hunters in which Al Pacino is starring. A TV spot was made for Sonic the Hedgehog, which featured confused athletes and some pregame spots for A Quiet Place Part 2 and The Spongebob Movie: Sponge on the Run and others was kept. Some other exciting movies to come includes Top Gun: Maverick, Black Widow, and so on.

What are Super Bowl Spots obtained?

Athletes Michael Thomas, Christian McCaffrey, Allyson Felix, and others were seen in a TV spot by Paramount. Sonic, the Hedgehog, will hit the theatres on 14 of February.

The SpongeBob Movie: Sponge On The Run

The movie The SpongeBob Movie: Sponge On The Run features SpongeBob’s adventure with his next best friend Patrick to find his pet snail, Gary. The film will be released on 22 May.

Hunters are about the Nazi officials in 1977 who are conspiring to create a Fourth Reich in the US. The cast will include Al Pacino and Logan Lerman. It will come out on 21 February.

The first part of A Quiet Place has given a horrifying experience to the audience. Now, it’s time for a second part. The movie will feature John Krasinski.

F9 is the latest installment in the Fast and furious franchise with cars racing through caverns, and Jonn Cena joining the cast.

Mulan is Disney‘s action movie, which features Mulan, the eldest daughter, if a warrior. The movie is released on 27 March.