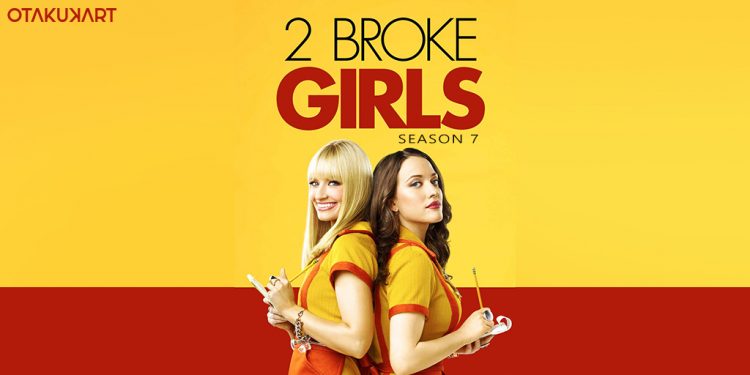 The sixth season of the American television sitcom, 2 Broke Girls concluded around four years ago. Therefore, fans have been wondering about the 2 Broke Girls Season 7 release date. Undoubtedly, this American television sitcom is one of the successful series on CBS Network, and fans interested in comedy enjoyed this series. “2 Broke Girls” is the creation of Michael Patrick King and Whitney Cummings, and they also wrote the screenplay for this series. Further, the show first aired on CBS on September 19, 2011, and, after an airing of 138 episodes over six seasons, concluded on April 17, 2017. The show was a hit since the release of the first episode of the series, as the audience enjoyed the struggle the two lead characters from different backgrounds go through to start their cupcake business.

However, the ‘2 Broke Girls’ received mixed reviews after the release of the first episode. The first season mostly received positive reviews. But as the show continues, the ratings dropped and also the show received lots of negative reviews. The show featured Kat Dennings and Beth Behrs as the lead characters, Maxine “Max” George Black and Caroline Wesbox Channing. Fans appreciated the performance of the actors, especially that of Dennings. However, the writing and directing received critics from the audience. The American television sequence is also full of comic sequences. Therefore, fans are eagerly waiting for another season of the CBS series for the past four years. Thus, we will discuss the ‘2 Broke Girls’ Season 7 release date and more.

What Happens In The First Three Seasons?

The first season of ‘2 Broke Girls’ revolves around Max Black and Caroline Channing. Max comes from a poor family where her mother raised her alone and Caroline has been raised as a rich father’s princess, but she also went broke after her father got caught in some illegal acts. The two girls from different backgrounds come together and work at a diner in Brooklyn. However, the girls plan to raise money to start a cupcake shop.

In the second season, the two girls manage to collect most of the money required to start their cupcake business. they further take the remaining $20,000 from Sophie, who is a Polish immigrant and runs a dry-cleaning company. However, the business fails and had to lease their shop. Whatever money was left, they had to return it to Sofie. Thus, the girl again ends up broke. Further, Caroline meets her first love interest, Andy, who ran a candy shop. But the two eventually break up as Caroline focuses her attention more on the cupcake shop.

Max and Caroline again start their cupcake business in the ‘2 Broke Girls’ Season 3. Further, Max enrolls into the Manhattan School of Pastry, where she comes across Deke, her first love interest in the series. Max and Caroline also plan Dekle’s parents to invest in their cupcake business, but the plan fails. Caroline also works at that School where she even has an affair with the head chef Nicholas. He eventually closes the school because of the affair and goes back to France.

Also Read: Who is Kat Dennings & What is She Famous For?

What Happens In The Later Three Seasons?

In ‘2 Girls Broke’ Season 4, the cupcake business was doing well for a while, but it again goes down. Thus, the two girls take on a job at The High, which is an elite pastry shop, to earn money to pay the loan they took for their own cupcake business. Aside from Max and Caroline working at the elite pastry soap, Sophie marries Oleg, the perverted employee at the diner in Brooklyn where Max and Caroline worked in the past.

The fifth season of the American television sitcom revolves around Caroline selling her life story for a hefty amount. She uses most of her money to expand her cupcake shop, eventually converting it into a dessert bar. Further, Carolines uses the rest of the money to buy part ownership of the diner in Brooklyn where she worked in the past to help the owner Han to help him pay his debt. Meanwhile, Max meets a celebrity lawyer, Randy, whom she even dates in this season. Further, Sophie gets pregnant with her and Oleg’s child.

In the sixth and final season, Max and Randy have an on-and-off relationship. Also, Randy wants Max to move with him to California. But Max refuses the offer, as she doesn’t want to leave her best friend, Caroline. However, Randy eventually permanently moves back to New York and proposes to Max, and she accepts the proposal. Meanwhile, the movie about Caroline’s life was released and at its premiere, Caroline gets an expensive dress on loan. But she eventually destroys it and has to pay for it from her and Max’s savings. Caroline dates Boby, a contractor who helped fix her dessert bar this season. Also, Sophie and Oleg welcome their daughter Barbara.

Also Read: Is Beth Behrs Pregnant in Real Life? What We Know So Far

What Is The ‘2 Broke Girls’ Season 7 Release Date?

The sixth season of the American television sitcom concluded in 2017, and it’s been over four years since that. But there is still no ‘2 Broke Girls’ Season 7. People have been wondering when they will again witness the two girls returning on screen and trying to run their cupcake business. However, the show’s makers and CBS revealed that the sixth season was the finale for the series. Therefore, there would be no ‘2 Broke Girls’ Season 7. This news was devastating for many fans who enjoyed the show. As the sixth season ended with plots that need a continuation.

According to CBS, this American television sitcom wasn’t capable of competing with other comedy shows on CBS. Further, the show also received criticism for the lame and racist jokes on the show, which might be another reason for the show’s cancellation. Also, the ratings of the ‘2 Broke Girls’ dropped with each season. Therefore, it might be another reason behind the cancellation of ‘2 Broke Girls’ Season 7.

What Might Have Been The Plot Of ‘2 Broke Girls’ Season 7?

Fans won’t be able to witness the seventh season of the “2 Broke Girls”. But if there was a Season 7, then the plot might have revolved around the events after the sixth season. We can expect the cancelled season to put a spotlight on Kat Dennings character Max and her relationship with Randy. As she accepted the proposal of the celebrity lawyer and thus, the two tied the knot. We could have also witnessed her having trouble balancing her new married life and running the cupcake shop along with Caroline.

Who Are The Cast Of The American Television Sitcom?

Kat Dennings features as one of the two lead characters, Maxine “Max” George Black. Max is a girl who came from rough living conditions, as she lived in poverty and was raised by a single mother. The show also features Beth Behrs as the other lead character, Caroline Wesbox Channing. She is the daughter of a rich entrepreneur, but she also goes broke when her father was arrested for involvement in some shady schemes. Aside from Dennings and Behrs, the show featured other talented actors like Garrett Morris as Earl Washington, Jonathan Kite as Vanko Oleg Golishevsky, Matthew Moy as Han Margaret Lee, and Jennifer Coolidge as Zofia “Sophie” Kaczyńsk.

Where To Watch ‘2 Broke Girls’ Online?

The American television sitcom series, 2 Broke Girls, aired on the CBS Network. Those who couldn’t catch the television show can watch ’2 Broke Girls’ on YouTube TV and Amazon Prime Video. All the episodes of the Kat Dennings and Beth Behrs starring television sitcom are available on these streaming platforms. Although both the online streaming platforms might require the audience to have a paid subscription. Then the audience can enjoy the drama about two girls from different backgrounds trying their best to raise money for their cupcake business.