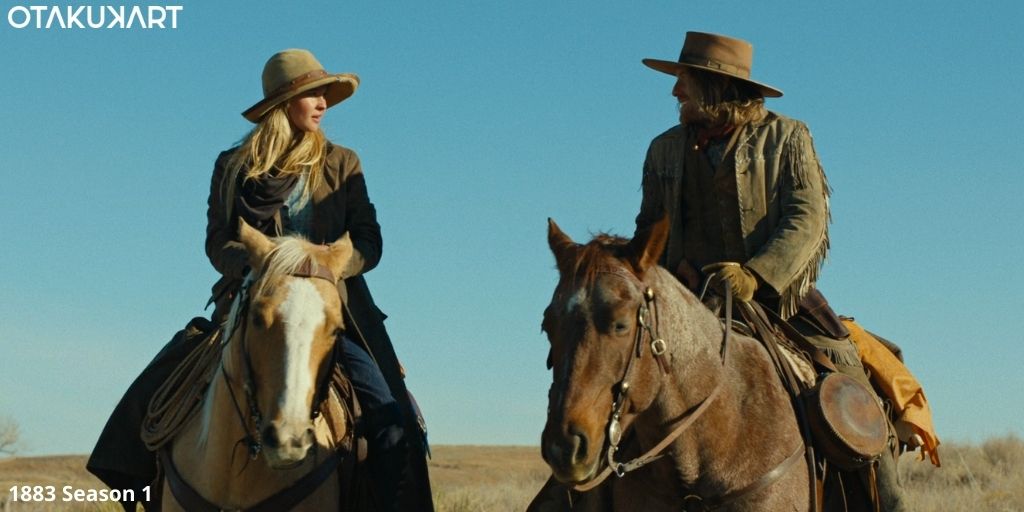 It looks like things will get rough with Elsa as she deals with her loss in 1883 Season 1 Episode 6. Meanwhile, the previous episode gave us a look at how Brennan was feeling seeing all the men, women, and children that died recently while trying to survive the wild. While things got difficult for everyone as a large amount of food fell into the river when the caravan fell apart while crossing the river.

On the other hand, Brennan, Thomas, and James learned from the clan’s leader that someone was stealing other people’s food in the clan and decided to take action against them. Whereas, Elsa and Ennis were growing a lot closer that got Margaret quite worried about her daughter. Meanwhile, Wade, James, and Thomas discovered that someone was following them and they needed to get everyone to safety. However, something much bigger was waiting for them as they moved ahead.

The latest American television series has managed to impress a lot of viewers and critics around the world since its premiere on 19th December 2021. Taylor Sheridan created this show to serve as a prequel to his other hit show Yellowstone. Meanwhile, this show stars Sam Elliott, Tim McGraw, Faith Hill, Isabel May, and more. The viewers have been loving the show so far and are now waiting to watch 1883 Season 1 Episode 6. But first, let us take a look at everything that went down done in the previous episode.

Episode 5 of 1883 Season 1 dropped on 16th January 2022 and was titled “The Fangs Of Freedom”. The episode began with Elsa looking after the cattle along with Ennis and Jade while she was in deep thought about how life became so tough in the wild in comparison to the city. Meanwhile, Brennan was devastated seeing so many women becoming widows and children becoming orphans as the wilderness consumed them. However, the bigger problem for them was the depleting food supply since a lot of it washed up in the water when the caravan broke down while crossing the river.

Furthermore, the safest destination for stacking more supplies was a week’s journey. But they had no other choice but to move on in that direction with whatever they got. However, the clan leader Josef came in to tell there was even less food as some people stole it for themselves. Therefore, Brennan and Thomas took James along to deal with those who did that. Eventually, Brennan banished those people from the clan leaving them on their own while everyone else moved ahead. On the other hand, Elsa told her mother that she kissed Ennis and was in love with her. Later on, at night, Margaret saw Elsa getting intimate with Ennis and told her to make sure Ennis sticks with her if she gets pregnant.

Meanwhile, Wade, Thomas, Brennan, and James came up with a plan to handle the six Bandits who were following them. While Thomas got furious with Ennis knowing what he did with her daughter. But Elsa stood up for Ennis saying that she loved her, while Ennis did the same and asked her hand from Thomas making it official. Soon, the Bandits tried to take over Josef’s caravan but it was a setup planned by Brennan, Thomas, Wade, and James to kill them. However, at the shocking end of it all, the last Bandit shot Ennis who was trying to protect Elsa. Watching the love of her life Ennis dead, Elsa got devastated and shot the Bandit several times killing him.

“1883 Season 1 Episode 6 will release on 30th January 2022 at 3 am ET on Paramount+” Meanwhile, the title for the upcoming episode is not announced as of now. This is certainly due to the fact that the show is taking an extra week’s break. However, we can expect an emotional episode as Elsa will be suffering from the loss of Ennis.

How To Watch 1883 Season 1? Streaming Details

“1883 Season 1 airs every Sunday at 3 am ET on Paramount+ in the United States.” Meanwhile, the viewers in Canada can also stream the show on Paramount+ with a premium subscription. Furthermore, the same goes for the viewers in the U.K. and Australia as well. Other than that, the show is not available anywhere else since it is exclusive to the Paramount+ streaming service.