Speaking of seasons, Dark Winds’ second-to-last episode of Season 1 featured some thrilling cliffhangers. But we have to admit. We’re particularly interested in finding out if Chee and Manuelito can work things out and reunite as the couple they are unquestionably destined to be.

Leaphorn initially has a key suspect in his custody before releasing him. Manuelito confronts her worst anxieties Chee is forced to choose between his people and his career. How should we interpret this? Here are our top five observations from Dark Winds episode 105, “Ha’nlni.”

Even though Chee (Kiowa Gordon) is an unreliable careerist, being around decent people like Leaphorn (Zahn McClarnon) and Manuelito (Jessica Matten) has undoubtedly revealed his better qualities. Recall how he carelessly passed some Navajo people stranded after their car overheated in Episode 101? In this instance, he stopped and gave roadside assistance to an older man in a similar situation. It’s also fortunate because his goodness was immediately rewarded.

Let’s find out what went down in the last episode. Spoilers ahead.

The older man unwittingly made Chee aware of a money-laundering scheme involving Devoted Dan (Rainn Wilson), a hard-sell used-car dealer who quotes scripture and whose obscene TV commercials must be seen to be believed. Not just your standard money-laundering scheme, either: James Tso (Jeremiah Bitsui), the character formerly known as Father Benjamin, and his scar-faced accomplice Frank Nakai are involved in a conspiracy (Eugene Brave Rock). Devoted Dan deserves credit for providing some much-needed comic relief, especially when the reluctant accomplice described to Chee how Tso and Nakai blackmailed him with some photographs: “I am a weak man when it comes to temptations of the flesh. OK? additionally to gambling and a little alcohol.”

What Happened To Devoted Dan?

Devoted Dan also warned Chee about the likelihood—no, make that certainty—that Tso and Nakai are working together with Special Agent Whitover (Noah Emmerich), who is far too endearing (at least to Chee). When we last saw Whitover in Episode 105, he was rushing back to the Navajo Nation to tell his former fellow officers about the evidence Chee had found that Whitover had known from the beginning that “Father Benjamin” was a fraud.

What Happened To Manuelito?

Sadly, Manuelito was driving Whitover to where she intended to aid Leaphorn in recapturing Nakai when we last saw her after giving him extra artillery! Since Nakai only needs to be recaptured because he could escape his prison cell while she was rendered helpless by yet another spell cast by the witchy Ada, it is somewhat personal for her (Amelia Rico). The good news is that Manuelito pulled herself together and obtained some defense-enhancing Navajo medicine from Margaret Cigaret (Betty Ann Tsosie). And then beat Ada up and burn down her house while Ada was still inside. Even though the torching wasn’t done on purpose, Manuelito was glad to be free of the witch’s sway after the fire destroyed all the tools she used to cast her spells. And as a little extra: according to her husband Lester (Jonathan Adams), Wanda began disclosing information about her role in the money laundering after emerging from the spider bite coma she had fallen into as a result of Ada’s enchantments.

What Happened To Leaphorn?

Leaphorn uncharacteristically lost his cool in response to Nakai’s comments about the late Joe Jr., engaging in enhanced interrogation techniques, and ultimately making peace with Guy (Ryan Begay), the father of the murdered young woman who had dated Leaphorn’s son. Despite all this, Zahn McClarnon had to carry most of the episode’s weight. (Congratulations to Begay for his profoundly moving performance as Guy tearfully acknowledged that it wasn’t until he lost his child that he understood Leaphorn’s unrelenting grief.) And then there was the scene where Leaphorn and his wife Emma (Deanna Allison) had a painfully emotional discussion about the death of their son, during which Leaphorn finally admitted that, no, he hadn’t wanted Joe Jr. to attend college. 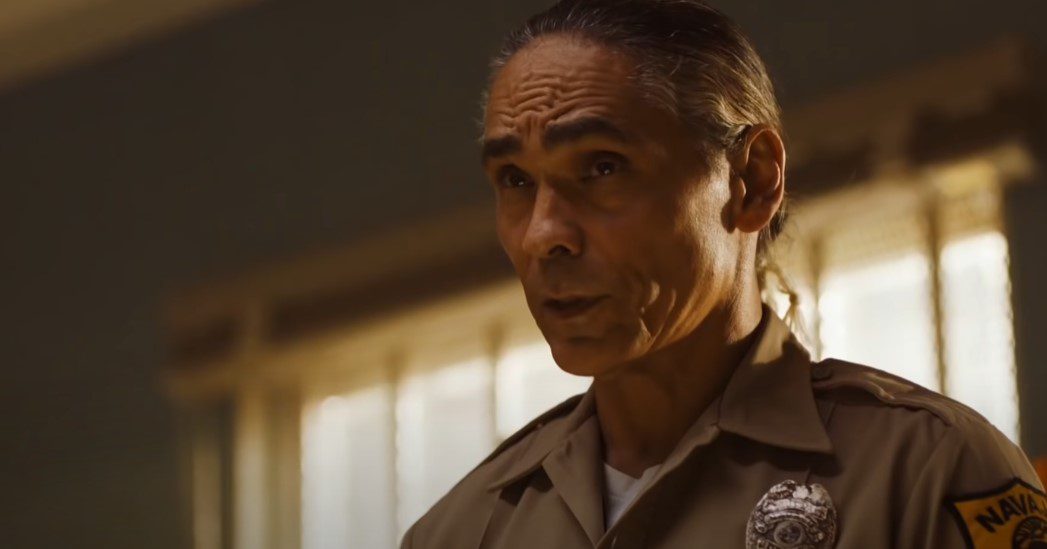 This is the next-to-last episode

Where To Watch Dark Winds?

If you want to watch Dark Winds, tune to the CW, use its website, or its app. Also, the show is available for purchase or rent from Spectrum, Google Play, the Microsoft Store, Amazon Prime Video and Apple iTunes.

Dark Winds Season 1 Episode 6 will release on July 17, 2022, on AMC at 21:00 hrs Eastern Time, United States. Firstly, the upcoming season finale episode’s title is “HózhóoNaasháa” and Maya Rose Dittloff wrote the script. With this intel, we conclude this article here at Otakukart. Thanks for your attention. Happy streaming, and see you soon.