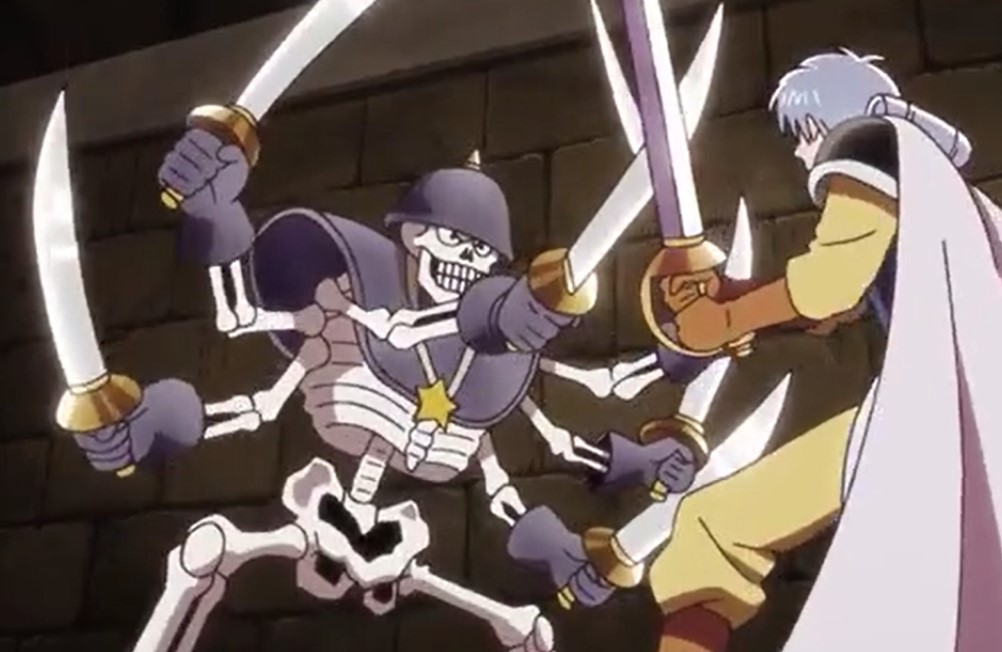 Next week Dragon Quest will be taking a weekly break and returned on the day mentioned on the weekly schedule below. Dai and Popp are surprised by Hyunkle’s arrival during their training. They started fighting with him, and Dai attacks him with Zaples. Pop thought that they managed to burn Hynuckle into crips, but his armor absorbed all the attacks. He started teasing Hyunckle without knowing that he is still alive inside the armor.

Hyunckle punches Popp and sends him flying. He gets up and attacks them. He unleashes Dark Pupperty Aura Hand and traps Dai with strings, then attacks with Bloody Scryde. He broke Dai’s armor who realize that they can’t beat Hyunckle using magic and a sword. Popp tries to wake up Dai, and Hyunckle reveals that Bloddy Scrde is the killing attack. He adds that Dai is finished, and Popp must join Dai in the afterlife.

Dragon Quest: The Adventure of Dai Episode 14 will be released on Saturday, 9 January 2021, at 9:30 AM JST. A new episode of Dragon Quest will be released every Saturday. Watch this Anime officially on Crunchyroll. Let’s take a look at the recap and preview below.

Previously on Dragon Quest: The Adventure of Dai Episode 13

When Hyunckle wanted to slay them, Maam shouts at Hyuckle to stop, and Hyuclke is wondering how Maam has escaped the prison. Maam tries to reason with Hyuncle that Avan is not his father’s killer. She showed him a chest that has a Soul, Shell. A Soul Shell contains messages from the dying while Popp notices that Dai is still alive. When he was attacked, he leaned his body back and avoided a hit to his heart, and he wakes up, revealing how they can’t beat Hyunckle.

Hyunckle decided to listen to his father, Bartos dying words. The Soul Shell reveals that the day the hero’s party attacked the Underground Palace, Bartos fought with Avan. Avan defeated Bartos and put his sword back. He tells Bartos that he is not going to kill him. They must stop the war between humans and demons. Avan saw a medal on Bartos’s chest and realized that Bartos has family, and he said he wouldn’t take the father’s life.

Bartos bows in front of Avan, saying that he has defeated him in strength and the heart. Avan asks Bartos to open the gate for him since he is only here for the demon king Hadlar. Bartos reveals how he found Hyunckle and raised him. Bartos ask Avan to take care of Hyuckle if something happens to him. He knows that Hadlar won’t let him live long since he is opening the gate for the hero.

Avan accepted Bartos’s request and went to face Hadlar. They fought a fierce battle. Hadlar got saved by the dark powers of the Underworld Lord Vearn. Hadlar escape and went to the gate where Bartos is and reveals everything that has happened during the battle. He tells Bartos that he must sleep for 13 years to build up his powers and create a new Dark Army. The new army will be far greater than the current Dark Army.

Before he does that, he needs to execute Bartos since he failed and bow in front of the hero. Hadlar reveals that Bartos’s human-like warmth makes him weak, and he let Avan pass right through the Hell Gate. Hadlar reveals that there will be no place for weaklings like Bartos when he creates a new Dark Army. Hadlar executes Bartos and when to sleep for 13 years. He left a message that he will come for Avan when he comes back with his new army.

Back to the present, Hyunckle now knows the real killer of his father, Bartos. Dai gets up, and he is still under a spell that he is still fighting with Hyckle. Poop and Maam try to stop the two from fighting, but they failed, and Dai has come back with new powers. Dai and Hyunckle fight a bloody death fight, in which Dai light a Frizz spell on his sword. Hyunckle realizes that no one has ever encased a weapon in magic, but Dai is doing it.

He also thinks that it is beyond the human to see Dai doing what he is doing. The two are now evenly matched up, and Popp notices that Dai uses both magic and sword to attack Hyunckle. He realizes that to defeat Hyunclke, you have to use both magic and a sword simultaneously. Earlier, they were failing because they were using them separately. Dai manages to defeat Hynuckle and puts him to the ground aiming for the final blow.

Maam interferes, worrying that she doesn’t want to see the disciples of Avan fighting each other. The sky becomes clear with dark powers gone, and Dai went back to normal. Later Flazzard shows up laughing at Hyunckle that he is siding with the heroes. Flazzard makes the volcano erupt and disappear. Dai and others tried to escape, and he went back to the dark army and revealed what he saw. Blizzard said that he should be the one to be sent to kill princess Leona.

For the next months, that was all about the latest development of the upcoming episode. You can also try to read the latest updates here Dragon Quest: The Adventure of Dai Episode 13.