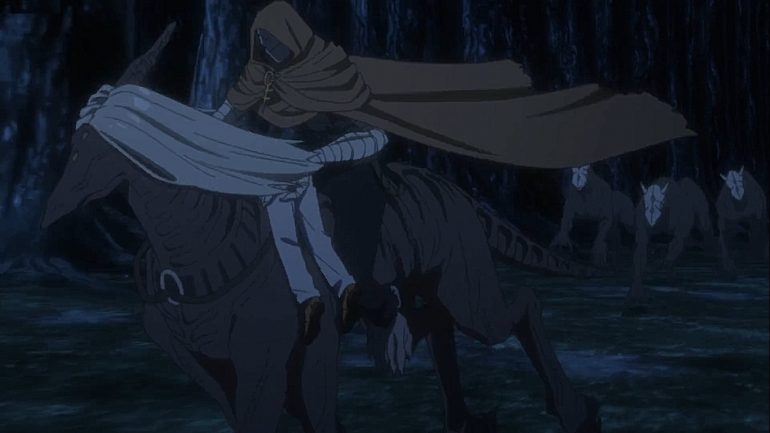 The Promised Neverland Season 2 anime has just returned, and we all can’t wait to see how things will play out this time. This season seems to be introducing a new perspective as the children are now out in the woods where things could get dangerous any minute. They are currently on the run from their farm; with the demons on their chase, it was just a matter of time before they are caught. But it’s more interesting with the secret message that has been left with by William Minerva, so they are now on the search for him.

The Promised Neverland Season 2 is currently ongoing and releases new episodes on Thursday late. For more details about the next episode’s release, you can check out its full post: The Promised Neverland Season 2 Episode 2 Release Date. In the season premiere, the anime continues from where the anime’s first season had left off. We saw the children moving about the forest after their successful escape. But there is still suspense in the air as they know that the demons are behind in pursuit. And as the master of the forest territory, it will be just a matter of time before they catch up.

Moreover, this time the demons are not their only enemies as there are other forest creatures. Things started well for them as they navigate. But Emma realized that they would have to find a water source after walking for a long time. Fortunately for them, they came across water lilies and did not have to go straight to the river where Ray suspected that it would be dangerous since the enemies would expect them to make that move.

Emma Leads The Children Through The Woods

Using the pen they had with them, which had the initials WM inscribed. They navigated the map of the area where they are. And within the map, they found clues and a message which tells them where the person who left it is located and that they should see him. They were set to their new destination, and Ray suspects that it is likely that the person who wrote this is William Minerva.

While a monster attacked them on their way, they made their usual maneuvers and managed to stay safe. Ray decides to go and lure the monster into a bottomless pit while the rest of the group moves. But just when he was left alone with the monster, the demons caught up and killed the monster. Calling out Ray to come out as they know he is there. Meanwhile, Emma fell sick, and the wound in her ear has opened up again.

The demons that have caught up with Ray try to catch him, but he was agile, and they started a chase. It was just a matter of time before Ray runs out of breath and collapses. Out in the forest, they are very vulnerable, and as young children, there isn’t much they can do against the demons than just run and try to our maneuver them.

Back in Emma’s group, a mysterious individual shows them the way to safety. Though they do not trust the person, she guides them as they have noticed that Ray has not returned yet. And with Emma developing a fever and bleeding, all they could do was to receive help. Back in Ray’s pursuit, another mysterious man appears riding what appeared to be a horse and snatched him away. With the demons in pursuit, he seems to have the right tools to thwart them off and managed to lose them.

The Demons save the Children

Ray was unconscious, and as he woke up, he found himself within what looked like a cave. It appeared that he had received good hospitality, but he has no idea where he currently was. As he woke up, he moved around and found Emma in the next room. She was safe, and the wound has been treated, and Ray concluded that whoever saved him might have saved Emma and the children. Emma is a little bit worried as she has no idea where the children are.

The woman who has shown Emma to safety appeared and told him that the children are safe and were about to have dinner. So she invited them along, but as they follow her, Ray noticed that she is a demon and asked her why a demon would save humans. At the same moment, the man who saved Ray before also appeared behind them. Apparently, both of them are demons, and this scares Emma and Ray.

The situation appeared as if the two demons might have other motives. But if they planned to eat them, they probably would’ve done so when they were still unconscious, which would’ve been easier for them. Now, Emma and Ray are only concerned as they have never met any demons that would save humans. This will likely be cleared up in the next episode, and we will get to see how these two demons had just saved humans.