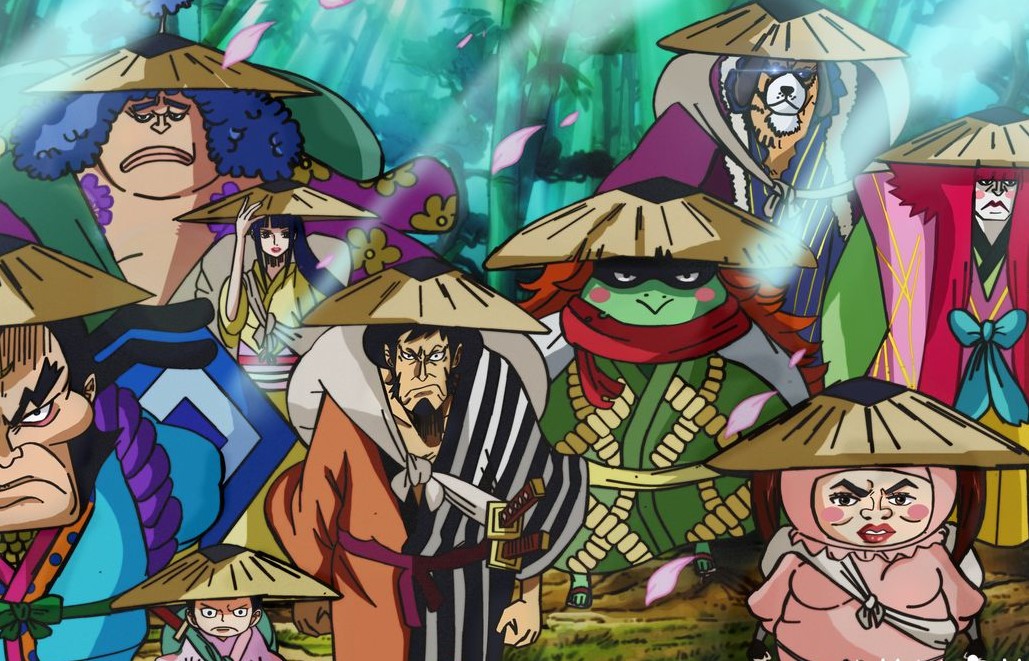 Kinemon couldn’t wait for the Straw Hat to show up at the Port; he told Shinobu and others that he is taking a boat and attacking Onigashima today. An incident has already taken place the night before the great battle. Orochi’s allies have found Straw Hat Ship Sunny hidden inside the cave at the beach of Kuri. Orochi told them to blast Sunny, and they throw explosives inside.

Everything explodes, and Orochi jumps, saying that he won’t let them have their way. Orochi orders his ally to blow the great bridge between Kibi and Udon. After blowing the bridge, they called and told him that mission is complete. Everything has been blown up for the enemies not to meet, and he said they would rebuild once everything is over. Orochi comments that he has not seen the Akazaya members or samurai troops recruited with his own eyes.

One Piece Episode 961 will be released on Sunday, 7 February 2021, at 9:30 AM JST. Every Sunday, a new episode of One Piece is released. Watch this Anime’s latest episode officially on Crunchyroll, AnimeLab, and Funimation. Take a look at more details below. 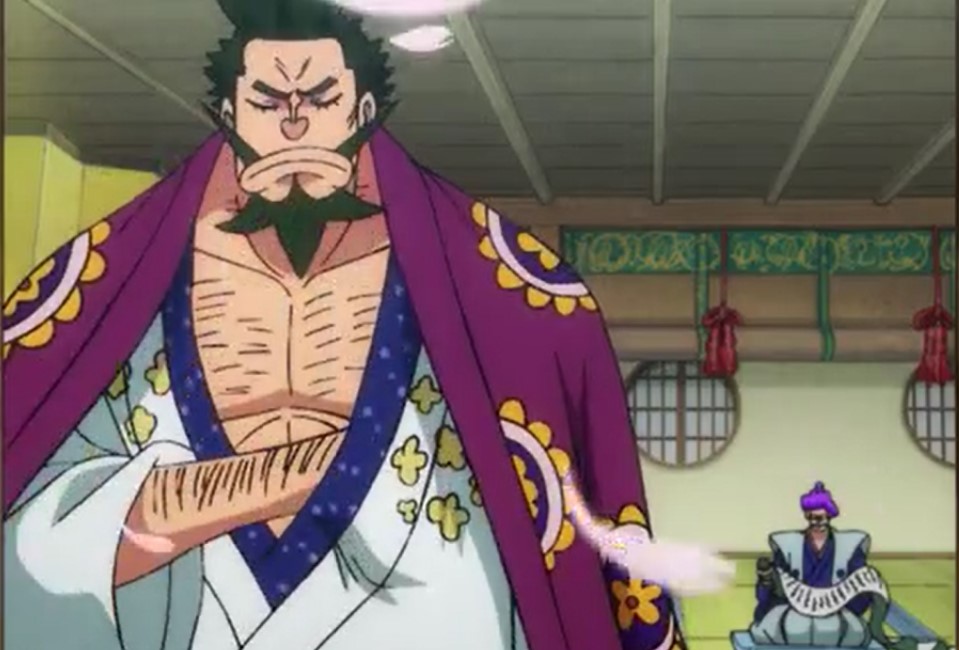 Previously on One Piece Episode 960

Orochi can’t believe it, but he knows that the Akazaya members are alive. He wants to see their heads in front of him to clear his doubt. Orochi comments that he does not care if people think that he is crazy, but he has the authority to take action. He took the map and said he had blocked all the routes to Tokage Port. He praises the enemies for recruiting four thousand troops.

Orochi comments that no one will make it to the Port when he is still alive, and they won’t get a chance to get revenge. The Akazaya members are on the move, and Momonosuke is trying to stop them. He thinks that it is suicide for them to use the small boats in heavy rain and storms. Momo suggested that they can regroup and begin again when they get another chance. Kinemon comments that if they miss this opportunity. They will have to wait for a year, and they cannot hide anymore since the truth about them will be revealed soon.

Dog Storm comments that Kaido’s army will come to hunt rebels. Kinemon said that they could not continue to steal their food anymore. He reveals what happened before they left Kuri. The people who believe in their great battle were burned alive, and among them, there is Kinemon’s wife. He asks Shinobu and Momonosuke to allow them to go, and Momo said no. Kinemon looked at Momo and said he wants them to flee and live in disgrace.

Momo asks about him, and Raizo said he would live with Hiyori (Komurasaki). Shintemaru comments that if they did not meet Oden, they would not be Samurai since they were all immature. Kinemon said that is why they want to be Oden samurai retainers until the end. The Nine Red Scabbards decide to fulfill the promise of opening up the Land of Wano made by Oden.

Forty-one years ago, in the Flower Capital, Kozuki Oden return, and men around the capital were scared of him. The comments that they have to hide their women and children since everyone is attracted to Oden. They think that he failed to sail again and he wants to get out of the capital badly. He runs through the capital and heads to the forest; he tried to jump when he reached the cliff. Oden thought that he could jump the sea and get to the big world. 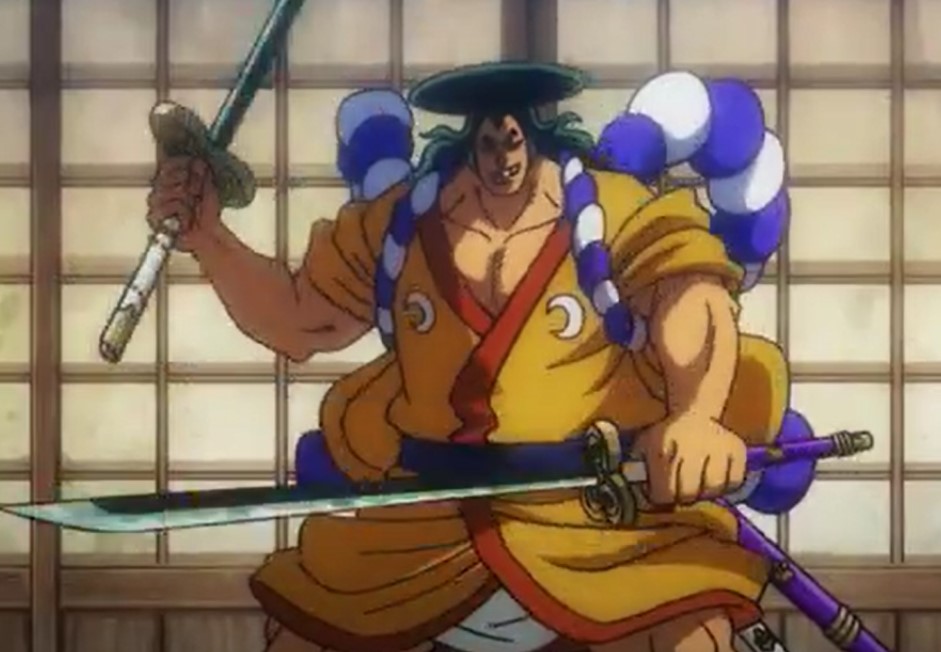 Back then Land of Wano was full of life, but Oden wants to see the big world. Oden kept on falling on the same spot, trying to jump the sea so that he can reach the other side. Kinemon used to be arrested for stealing money, and Tsuru keeps on nabbing him. Tsuru stripped Kinemon naked for stealing her money and warns him that she will sell his organs next time. Oden cannot sail, and now it was his 38th attempt to leave the country illegally.

Oden’s father, Kozuki Sukiyaki, questions why Oden has returned alive from the sea. Sukiyaki guard reveals how powerful Oden is, and nothing in the sea can harm him. When he’s was eight years old, he defeated an army of Samurai alone when they were gambling. The hot-blooded gamblers wanted to rob him, but he beat them. He got involved in a Harem war for partying with the ladies of Wano. The men in Wano challenged him for taking their wives in one night.

The guard reveals how Oden got arrested and how he failed to escape Wano. Sakuyaki sends notice of disavowal to Oden breaking their relationship. He thought that Oden would mend his way since he is his father. Oden continues with his acts. One day Kinemon stole a white boar and met Oden, who asks him to give it back since the white boar’s parents are looking for the little one.

Take a look at how the Reverie conference took place here: One Piece Episode 960. That is how we conclude the upcoming episode of One Piece.