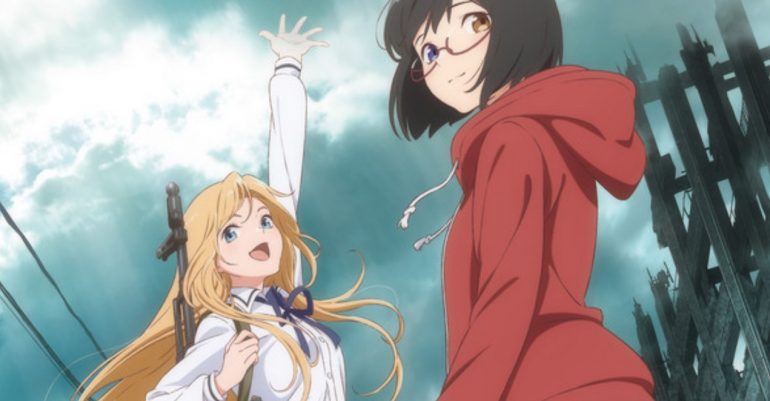 Later last year, around September, news came in that Otherside Picnic novel series will be getting an anime adaptation, as reported by Crunchyroll. The anime is scheduled for a January 2021 release, and not long ago was the premiere date revealed. Takuya Sato will direct the upcoming anime. He also worked on projects like Steins Gate, and he will be working together with Ayumi Nishihita, who will handle the character designs.

Toru Yoshida working together with Anime R studios, will be handling the effects animation. With Hiyoruki Matsumoto working on the art setting. You Iwaida will be working on the color designs with Takeshi Kuchiba directing the photography. Yuya Shiraishi will be working as the 3D director, and Masahi Goto working on anime editing, and Takeshi Watanabe will handle the music. The entire Otherside Picnic project will be produced by LINDENFRILMS, working together with FelixFilms studios.

Otherside Picnic Episode 1 will be released on 04 January 2020 JST. The anime will be available for streaming across various regions through AnimeLab, Funimation, and Wakanim.  The anime has already released a PV and key art for the upcoming season. The official Synopsis of the anime as revealed by Crunchyroll was as follows:

The anime follows the life of Sorawo Kamishiko on her first encounter with Toriko Nishina. The encounter happened on the Otherside just after coming across “that thing” and had a near-death experience. From that day onwards, Sorawo’s life changed. The Otherworld is full of mysteries, and it exists alongside our world. It is home to dangerous beings, also known as the Kunekune and the Hasshaku-sama. They are legends stories and also appear in real ghost stories. Toriko and Sorawo enter this strange world for research, profit, and searching to find an important person. The anime is a tale of two girls as they explore a bizarre world and try to survive.

The Key Visuals released for the anime so far was also revealed at the time of the anime adaptation announcement:

The anime’s PV hinted at how the anime will be making its debut in a few days. Take a look at Otherside Picnic episode 1 preview:

Animenewsnetwork also reported that the anime adaptation’s official website revealed that the anime would also premiere on local Japanese channels like Tokyo MX, Sun TV, BS 11, and AT-X. The novel from which the anime is adapted is also serialized on J-Novel Club, and the cast revealed so far is as follows:

Natalie’s news website also revealed comments from important figures in this project.  Most notable ones being from HoneyWorks:

The title was described as heartwarming, like an exploration in a different world. They were fascinated by reading the urban legend that was researched once, and the story development was described as interesting. They sympathized with the unity of the sky fish: inferiority complex and jealousy longing.

The editor, Miki Sato, also commented on the project. After reading the work, the editor noted that they were fascinated by the interesting back world that Iori Miyazawa had drawn. Miki Sato also revealed that it was a great honor for them as they recently made their debut. They have just started to be in charge of the ED theme for the first animated work. Toriko, one of the main characters. Changes the mind of the sky fish, which, in return, triggers the fish to look back at itself and change. The editor also revealed that they would be happy if the song will be a song that helps the character change their minds.

It’s only a few days until the anime debut. And those who follow the novel are well aware of the story and its development. It’s quite an interesting one, and based on the production staff; then the anime is likely to deliver something thrilling just like the novel did.