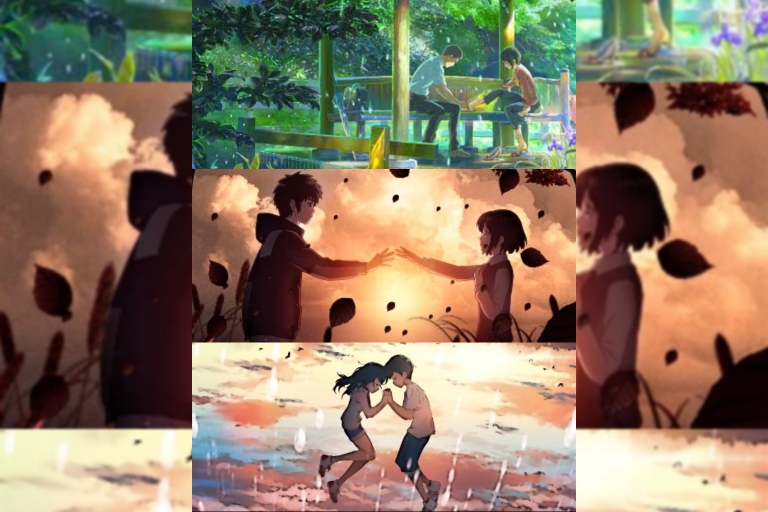 Ever since the release of Weathering With You, there has been a great rumbling within the fan community. Two characters in Weathering With You resembled Mitsuha and Taki from Kimi no Na Wa. This had fans asking questions. Makoto Shinkai, renowned director of these movies has confirmed that Mitsuha and Taki did infact make a cameo in the later released movie, Weathering With You. However, what fans did not notice, is the cameo of characters from Shinkai’s previous movie, The Garden of Words in Kimi no Na Wa. Let’s take a look at the three award-winning movies from Makoto Shinkai and the connection between them.

A faint clap of thunder

If so, will you stay here with me? – Yukino Yukari.

Shinkai’s movies bring the readers a step closer to their own hearts while journeying through the character’s life events. His masterpiece, The Garden of Words was released in 2013. The movie is about two people who are fighting their own worries. Unknowingly, they help each other overcome their fights and move ahead in life.

The main protagonists, Takao and Yukino, are people who were losing in life. They meet in a park when it rains and builds a bond. While Takao is only a 15-year-old student, he is far more mature for his age. He works part-time for his tuition and takes care of the family. He aspires to design shoes one day and works hard to achieve his dream. He acknowledges the fact that people often see his dream as unworthy, but, he continues to believe in himself as he sits alone in a park, making shoe designs.

Yukino is undergoing clinical depression. She works as a teacher in Takao’s school.  Here she’s bullied by some of her students, who accuse her of getting romantically involved with another student. Eventually, she stops showing up at work. Later in the movie, she is seen talking to her colleague about how she had lost her sense of taste and could only taste beer and chocolate. This explains the scene when Takao notices her drinking beer with chocolates in the morning.

Yukino and Takao keep meeting in the park for a month, without even knowing each other’s names. However, their interactions create a positive influence in each other’s lives. Takao grows more confident and learns more about shoemaking from the book that Yukino gifts him. She moves on from her traumatic experience and finally comes back to work. 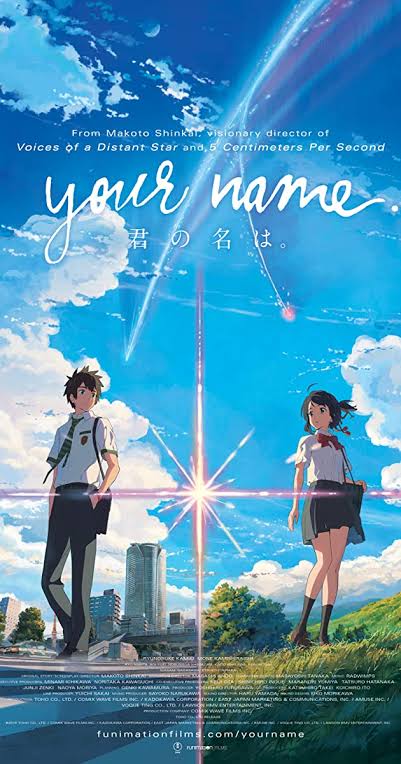 But, the sensation that I have lost something lingers for a long time after I wake up. – Mitsuha Miyamizu.

Kimi No Na Wa or Your Name is the highest-rated movie on IMDb among the three movies. Kimi no Na Wa gained a lot of positive comments for its mesmerizing plot and presentation. The story is about Taki and Mitsuha, who keep switching bodies due to some unknown phenomenon.

While trying to find the reason and solution to this phenomenon, Taki and Mitsuha try to untangle each other’s life. A series of events lead them to understand each other’s emotions. Somewhere amidst this, they fall in love, still not knowing each other’s names.

The movie connects with the viewers from the moment it starts. It does not let the viewers slip out even for a second till the very end. The tragic end of forgetting each other’s names leaves the pillows wet with tears. But, Shinkai turns it into a beautiful ending as Mitsuha and Taki meet again. 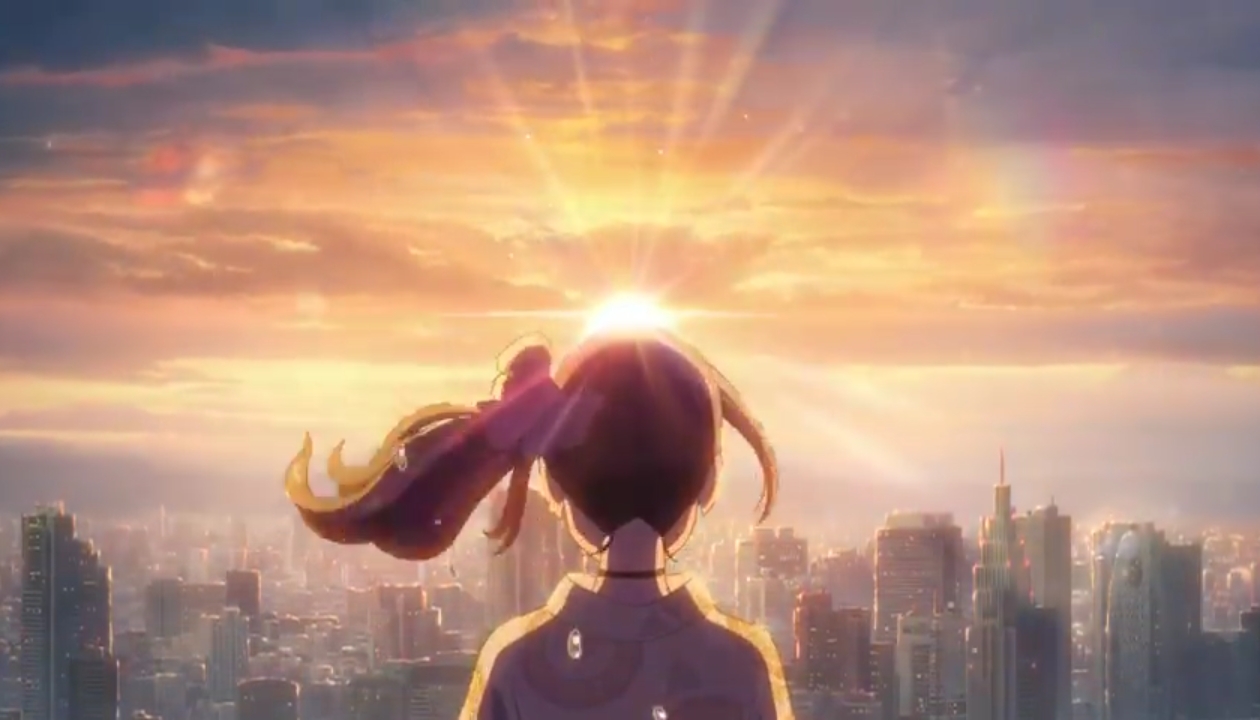 Who cares if we can’t see the sunshine? I want you more than any clear sky. – Morishima Hodaka

Three years after the release of Kimi no Na Wa, Makoto Shinkai came back with another beautiful movie. The plot revolves around Hodaka and Hina as they discover the meaning of sunshine, love, and life. The story is set in Tokyo in the year 2021. Tokyo has fallen victim to heavy rainfalls, almost drowning the city.

Hodaka runs away from his home and comes to Tokyo. He starts working for Monthly Paranormal Occult Editorial K&A Planning. Here, he learns about sunshine girls, an urban myth about girls who can stop the rain and bring sunshine. Hodaka meets Hina, who later reveals herself as a sunshine girl.

Hodaka and Hina start using this power to their benefit. In a city where it never stops raining, teenagers make money by stopping the rain when people wished them to. Things almost seem to be going well until they realized that there are limitations to this power.

Using these powers weakened Hina. But, this was not yet the worst scenario. They later realize that the only way to stop the rain is to sacrifice a sunshine girl.

Weathering With You, like the other two movies, have great dialogue deliveries that will definitely put the viewers in a trance. The story is another unique tale that emits sparkling energies throughout the soul.

All The Cameos in The Three Movies

The most prominent cameo that everyone knows about is the cameo of Taki Tachibana and Mitsuha Miyamizu in Weathering With You. However, here is a list of all the cameos that we get to see in the movies. Check them out below and find out which ones you missed. Yukino Yukari in The Garden of Words and Kimi no Na Wa.

In the second movie, Kimi no Na Wa, we get to see Yukino Yukari from The Garden of Words as Mitsuha’s literature teacher. The resemblance is similar to the protagonist of the first movie and the character also has the same name. Moreover, the characters from both the movies also have the same voice actor, Hanazawa Kana.

Fans still argued about the authenticity of this fact since Yukino clearly stated that she will go back to her hometown, Shikoku. This contradicts Yukino’s presence in Itomori after the events of the first film. However, Shinkai has confirmed that these two characters are the same Yukino Yukari. 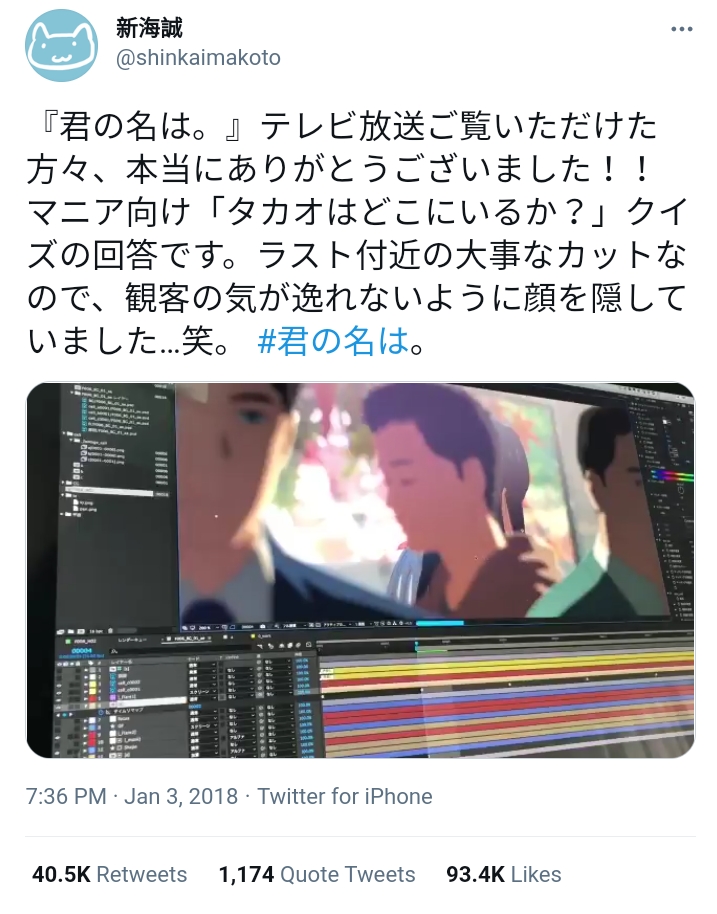 Shinkai had emphasized that there will definitely be a cameo of Takao in Kimi no Na Wa. When fans failed to notice the previous protagonist, Shinkai tweeted the scene on his Twitter in slow motion to clear his fan’s query. We only get to see a glimpse of Takao in the movie as a passerby. However, this is enough for us to know that all the movies are happening in the same universe. 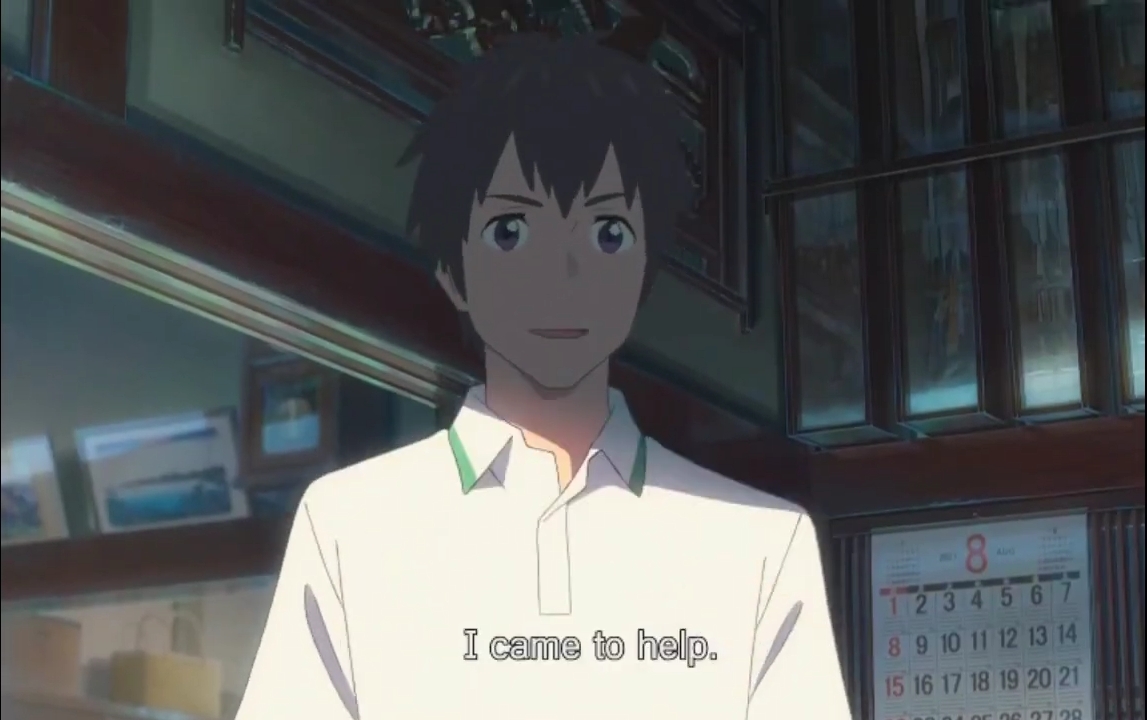 Taki Tachibana in Weathering With You.

In Weathering With You, we see Taki Tachibana as one of the clients that take help from Hina and Hodoka. He seems to be visiting his grandmother, who asks for a time under the sun to bid goodbye to her husband after his death. 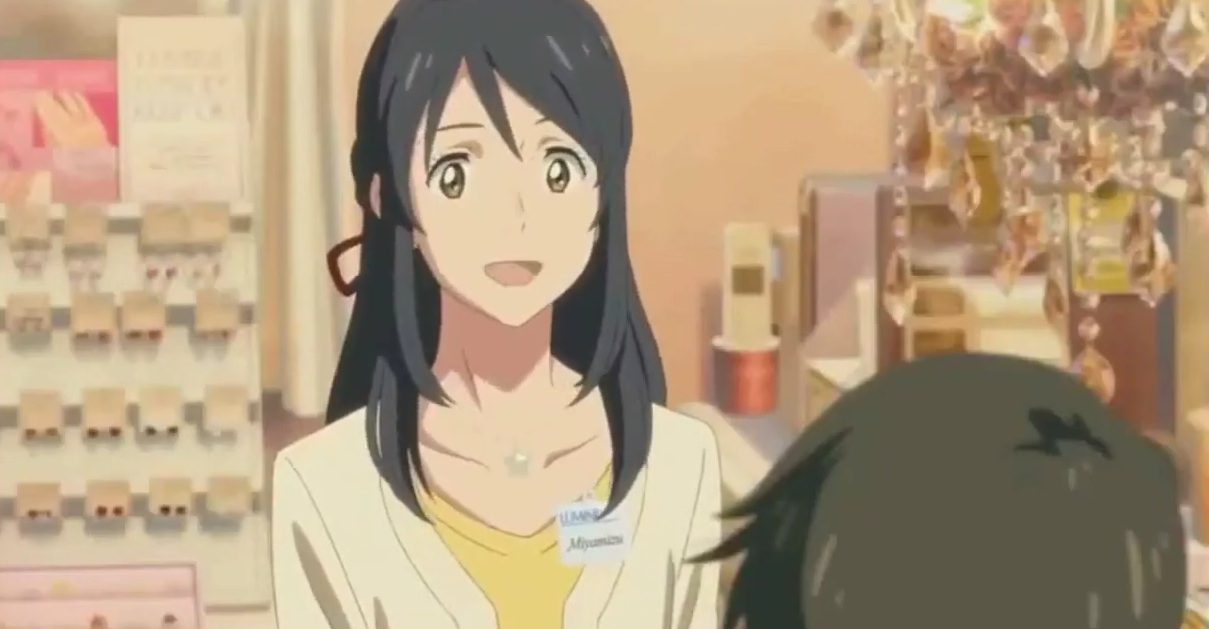 Mitsuha Miyamizu in Weathering With You.

Shortly after Taki’s appearance on screen, we see Mitsuha. She is working as an employee in a jewelry shop. Hodaka buys a gift for Hina here. When he looks unsure about his gift, Mitsuha assures him. 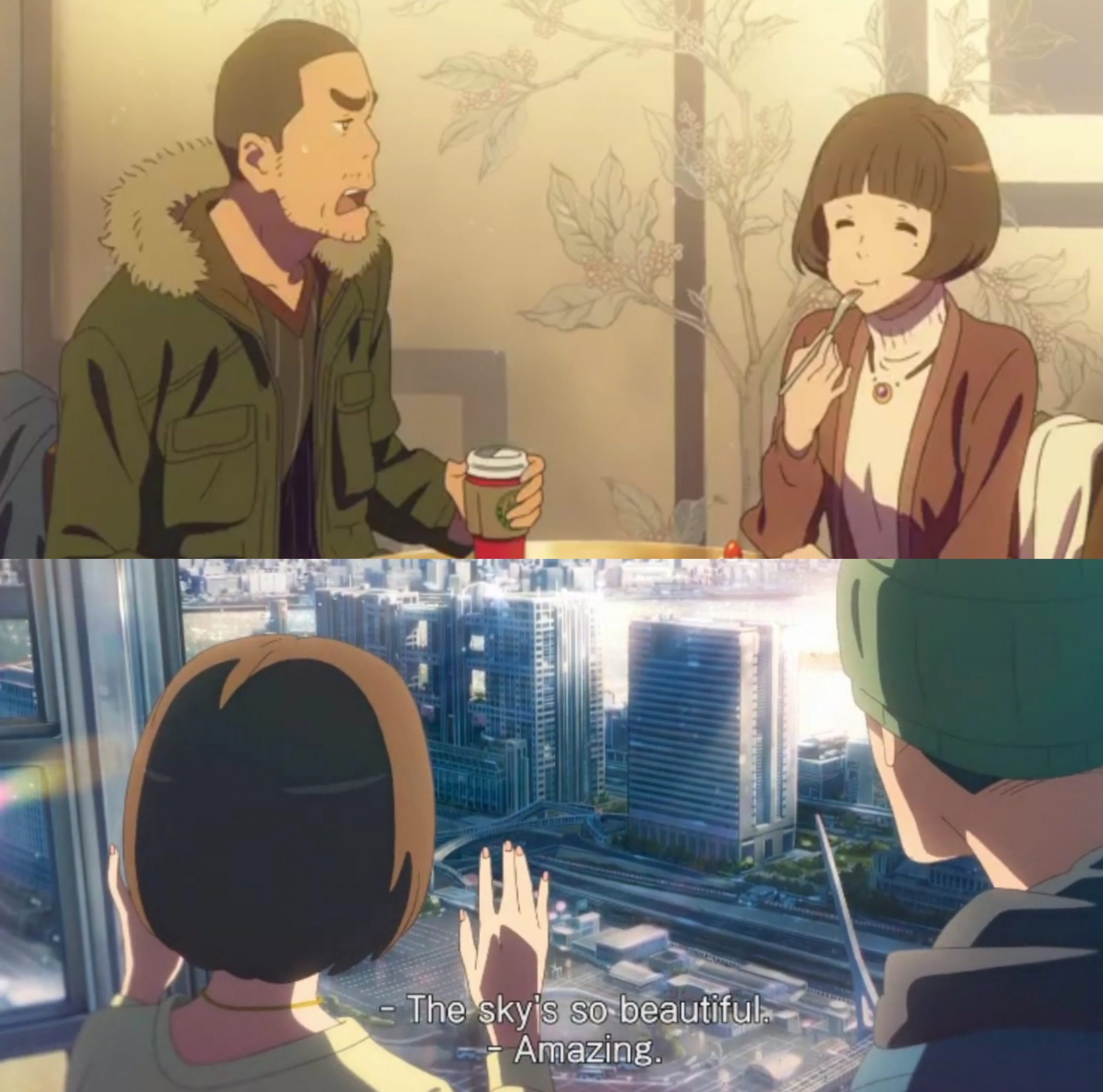 Mitsuha’s friends, whose grown-up appearances are shown towards the end of Kimi no Na Wa are also seen in the next movie. In a scene when the sky clears towards the end, they are seen on a Ferris wheel, admiring the weather. Yotsuha in Kimi no Na Wa. (Up) Yotsuha in Weathering With You. (Down)

Towards the end of the movie Weathering With You, we see a number of people being awestruck by the sunshine. One of the random people shown in that scene was none other than Mitsuha’s younger sister, Yotsuha.

Timeline of The Three Movies Simplified

Seeing a crossover of so many characters in these movies makes people wonder what exactly is happening. In an interview with Starburst Magazine, Shinkai reveals his intention behind these cameos. He wants people to see that before they meet their destiny, these people also lead a normal life. Additionally, since people have been going crazy about the timelines of the characters, Shinkai clarifies that they all belong to the same timeline.

Here is the most possible timeline that the characters have.

Takao and Yukino meet in the June of 2013. So, this marks the beginning of these movies. After bonding through June, they have no contact during July and halfway through August. Towards the end of August Takao finds out that Yukino is a teacher in his school. In September, Yukino leaves the school after Takao’s confession and Yukino’s heartfelt outburst of gratitude. This is where the next story starts. 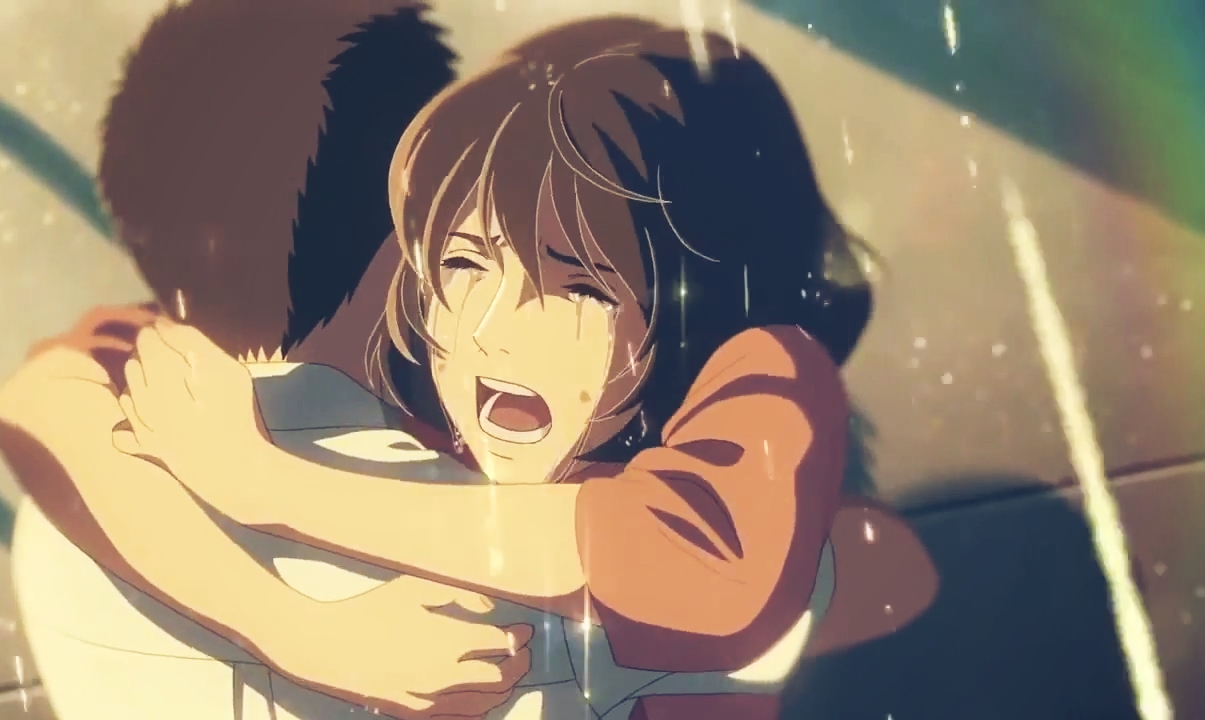 Although she says she will move to Shikoku, we see Yukino in Itomori. She is working as a literature teacher in Mitsuha’s school. He plays no major role in the movie, but we know that she is happy and healthy at the time.

In September of 2013, Mitsuha and Taki start switching bodies. Since we know from the story that Taki is three years away from her, so, that means, Taki’s timeline starts from 2016. Now, there are two realities between September 2013 and October 2013. Everything is almost the same from September till October 3. However, due to Taki’s prayers in the Itomori Temple, the reality of October 4 changes. Originally, the comet strikes Itomori, killing every in the area. Alternatively, in the new reality, everyone evacuates the place safely and Itomori is destroyed.

Mitsuha’s future and Taki’s history are changed. Nothing about the time between 2013 and 2016 is much known. The residents of Itomori live a new life in a new place. Taki belongs to the time zone of 2016. After forgetting the incident, he carries on with his normal life. At the same time, he is constantly missing someone. Mitsuha moves to Tokyo, where she works in a jewelry store. Somewhere about this time, Takao is also seen in Tokyo. However, nothing about his status is revealed. It is best to assume that he, too, is in good health.

Of course, Taki and Mitsuha live normal lives, working and being happy. In 2021, eight years after the comet struck Itomori, another mysterious phenomenon floods Tokyo. Set in a rainy season, Weathering With You starts in June. Hodaka and Hina are granting people’s wishes for a sunny moment. After Hodaka saves Hina from sacrificing herself, we see that rain continues to pour down for the next three years. Now, in Kimi no Na Wa we see that Taki and Mitsuha met in 2021 towards the end of the movie. However, we see a sunny day, which contradicts the third movie. This led fans to believe that the three movies were aligned in a multiverse.

Mitsuha running to the station prior to her and Taki’s reunion. The surroundings are wet, indicating it must have been raining.

If you see the last scene of Kimi no Na Wa where the reunion of the protagonists takes place, it is not difficult to notice splashes of water as Taki and Mitsuha run. The surrounding itself seems wet too. It can be assumed that it was raining that day, except during that moment. “Raining nonstop” could also be a strong exaggeration. Shinkai’s confirmation that the characters have the same timeline leaves only this possible timeline of events. 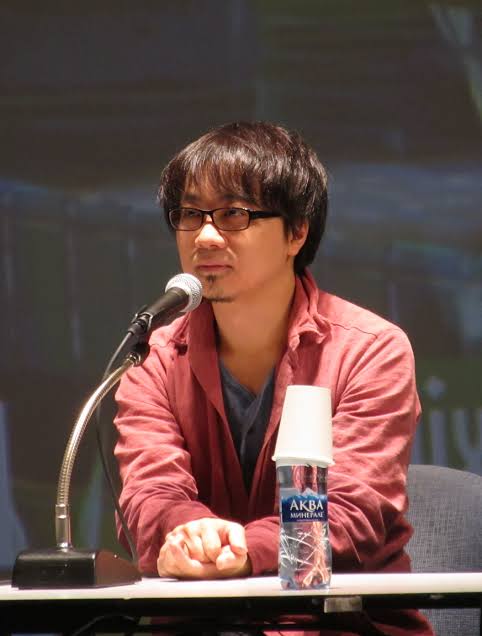 Makato Shinkai in an event.

Makoto Shinkai presented us with three movies that boosted our serotonin levels. He laid down our emotions on a strip of the film easily. Through the mere use of words, he touched the soul of millions.

Each movie was released in an interval of three years. After the recent release of Weathering With You in 2019, will he bring in another masterpiece in 2022? If he does release another movie, I am more curious about the characters that might get a cameo this time.