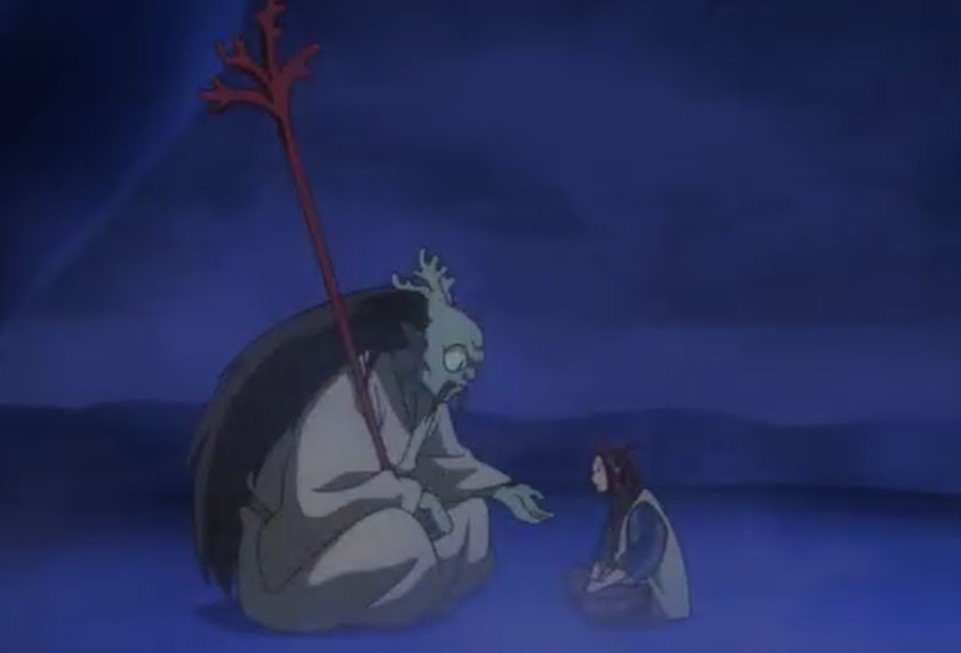 Ruki visited Hosenki II, who showed him a Black Pearl, and Hosenki thanks him for allowing him to use Rainbow Pearl and Lady Izayoi’s rogue. Ruki asks what he is planing with the Black Pearl. Hosenki II replies that he plans to deliver it to sir Inuyasha while one of the villagers has found a remnant of the root head again. He reports to the head village Kaeda. Kaeda is worried that it has been a month, and they can’t still get rid of it.

Kaeda said that it is a troublesome demon while Hasenki arrives at Inuyasha’s place. He reveals that the Black Pearl is complete. It has been completed 96 years earlier than scheduled. Hosenki asks Inuyasha to show him Adamant Barrage’s special technique inherited by his father to exchange Black Pearl. Inuyasha agrees since he owes the first Hosenki. He demonstrates the special technique and cuts a building in half, and Hosenki fulfills his promise.

Yashahime: Princess Half-Demon Episode 16 will be released on Saturday, 23 January 2020, at 5:30 PM JST. Keep in mind that the new episode of this Anime will be released every Saturday. Watch out for them when you continue. You can watch this Anime officially on Crunchyroll, Funimation, and Netflix. Let us move to the recap of this Anime and preview below. 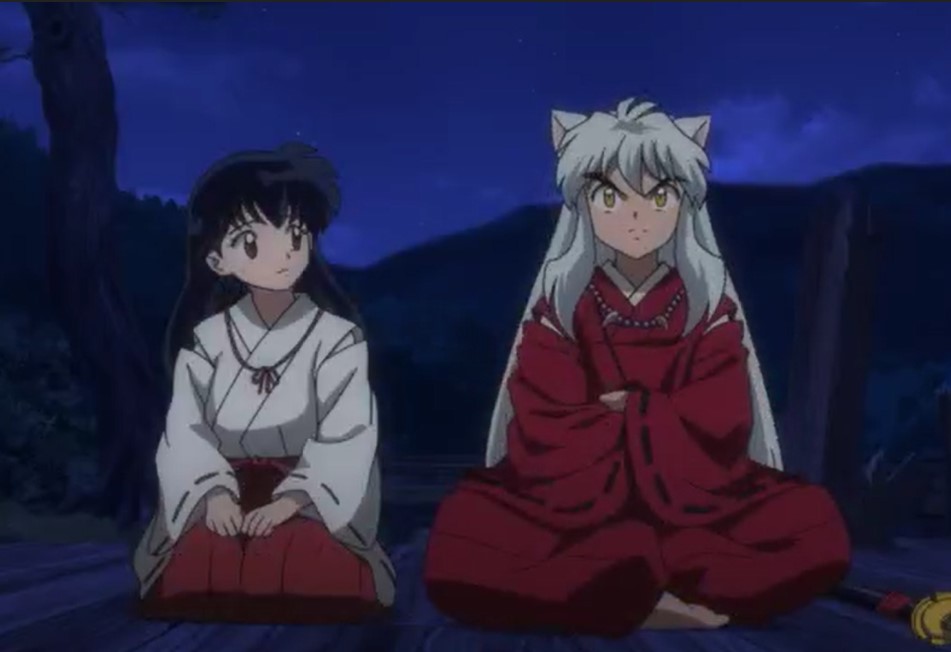 Hosenki reveals that the Black Pearl contains the original tears from the great dog demon’s wife, lady Izayoi. Inuyasha is glad that he is receiving a pearl that contains his mother’s tears. Hosenki reveals that the great dog-demon passed away, and lady Izayoi’s tears were turned into a jewel. The Tessaiga and the path to his grave were sealed inside it. It was placed within young sir Inuyasha’s right eye

Kagome asks about the shell, and Hosenki said that it is the rouge lady Izayo used. Hosenki reveals that in order to create the Black Pearl, they need some of Izayoi’s deep sadness. Inuyasha shocks Hoisenki by putting the Black Pearl inside his right eye. Hosenki said that he wouldn’t be able to get it out unless it is an emergency. Kagome notes that today might be lunar eclipse day. But she finds it odd since it was supposed to be a full moon day.

She realizes that the Earth’s shadow covers the moon, and it gets darker. Riku appears behind her, and she asks if they have ever met before. Riku said it is their first meeting. Kagome asks Riku how he knows her name. Kagome reveals that he hears about her from the legend priestess who made the right wish and purified the Shikon Jewel. He also said that she is well known for good deeds all over than she can imagine.

Kagome asks if he has a business with her, and he replies that a great cataclysm is approaching. Riku reveals that every 5oo years, a comet called the Grim Comet travels close to this Earth. A large fragment break and fall from that Comet that brings death and war. Riku also narrates the great dog-demon story, and Kagome realizes that it is Inuyasha’s father. Riku said it is true, and Kirinmaru and the great dog-demon joined forces. 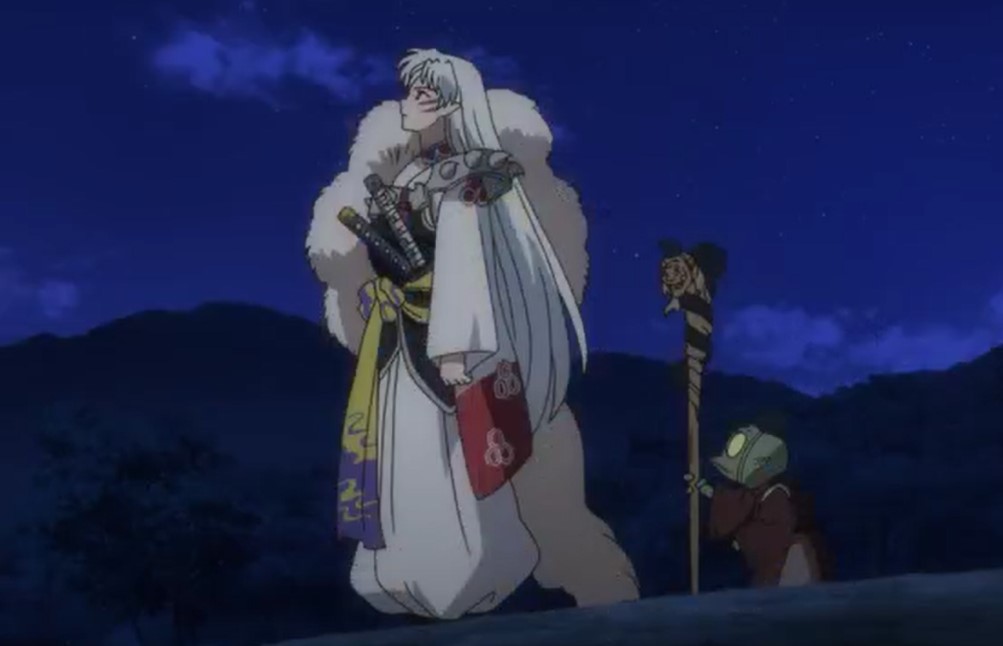 They eradicated the Comet fragment 500 years ago, and seven days from now, the grim Comet’s fragment will fall upon this earth once again. Since the great dog demon is no longer around and Kirimaru has fallen into a long slumber. Inuyasha can serve in his father’s place. They also have to revive Kirinmaru from his slumber, and Riku said they have to do it the other way. Since Kirinmaru hates humans and he will kill all the half-demon.

Including the one that is going to be born today from lady Rin. Riku said that the only way is when the great dog demon’s sons combine their strength. Riku asks Kagome to convince Inuyasha and lord Sesshomaru to combine their powers. Meanwhile, in the mysterious demon- Zero met with Sesshomaru and revealed that he has a twin. Zero told him about the story that Riku told Kagome, but it annoys Sesshomaru, who attacks her.

Zero vanished, and he realizes that it was her puppet, not her in real form. Later Ren gives birth to two half-demons, and Seshmaru shows up and takes them. Kaeda asks where he is taking them, and Kagome realizes that Sesshomaru wants to protect them from Kirinmaru before he reincarnated. She tells him how they can prevent the upcoming incident. Sesshomaru just left, but he knows that he has to work with Inuyasha to defeat the great Comet.

You can also get more updates on the previous episode using this link: Yashahime: Princess Half-Demon Episode 15. That was all about the preview and upcoming episode.