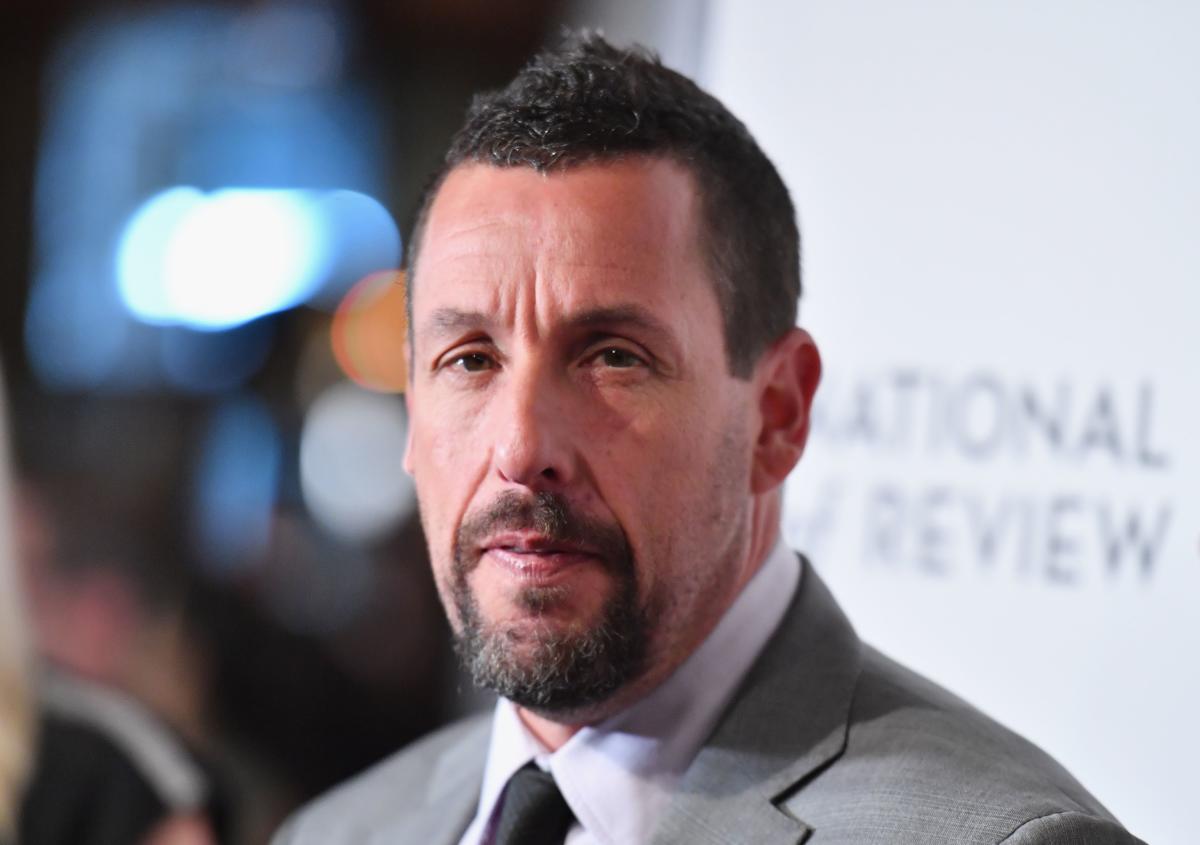 Adam Richard Sandler, professionally known as Adam Sandler is an American actor, comedian, screenwriter, film producer, and singer-songwriter. Adm rose to fame when he started to play a Saturday Night Live cast member. Adam does comedy, pun, action, and drama. All his films have grossed over $2 billion at the box office. Adam Sandler faces criticism on one ground: his films are filled with childish humor, and his lack of versatile roles. But that has hardly bothered the actor since he has done business in millions. The most common genres you will see in Adam’s movies are slapstick comedy to subtler dramedies to rom-com.

Adam has been in the movie-making business for over 25 years. The actor uses over-the-top characters to make his fans laugh. His massive success in comedy speaks for itself. Adam is the king of slapstick comedy in Hollywood. Some of his major comedic films are Billy Madison, Happy Gilmore, The Waterboy, The Wedding Singer, Big Daddy, Mr. Deeds, 50 First Dates, The Longest Yard, Click, Grown Ups, Just Go with It, Grown Ups 2, Blended and Murder Mystery.

Some of Adam’s dramatic performances are Punch-Drunk Love, Spanglish, Reign Over Me, Funny People, The Meyerowitz Stories.

More recently, Adam has voiced Dracula in the Hotel Transylvania franchise. It is a movie made over vampires of Transylvania. The latest Adam movie was Uncut Gems.

Amongst a huge list, here are the best Adam Sandler movies, rated according to IMDb. 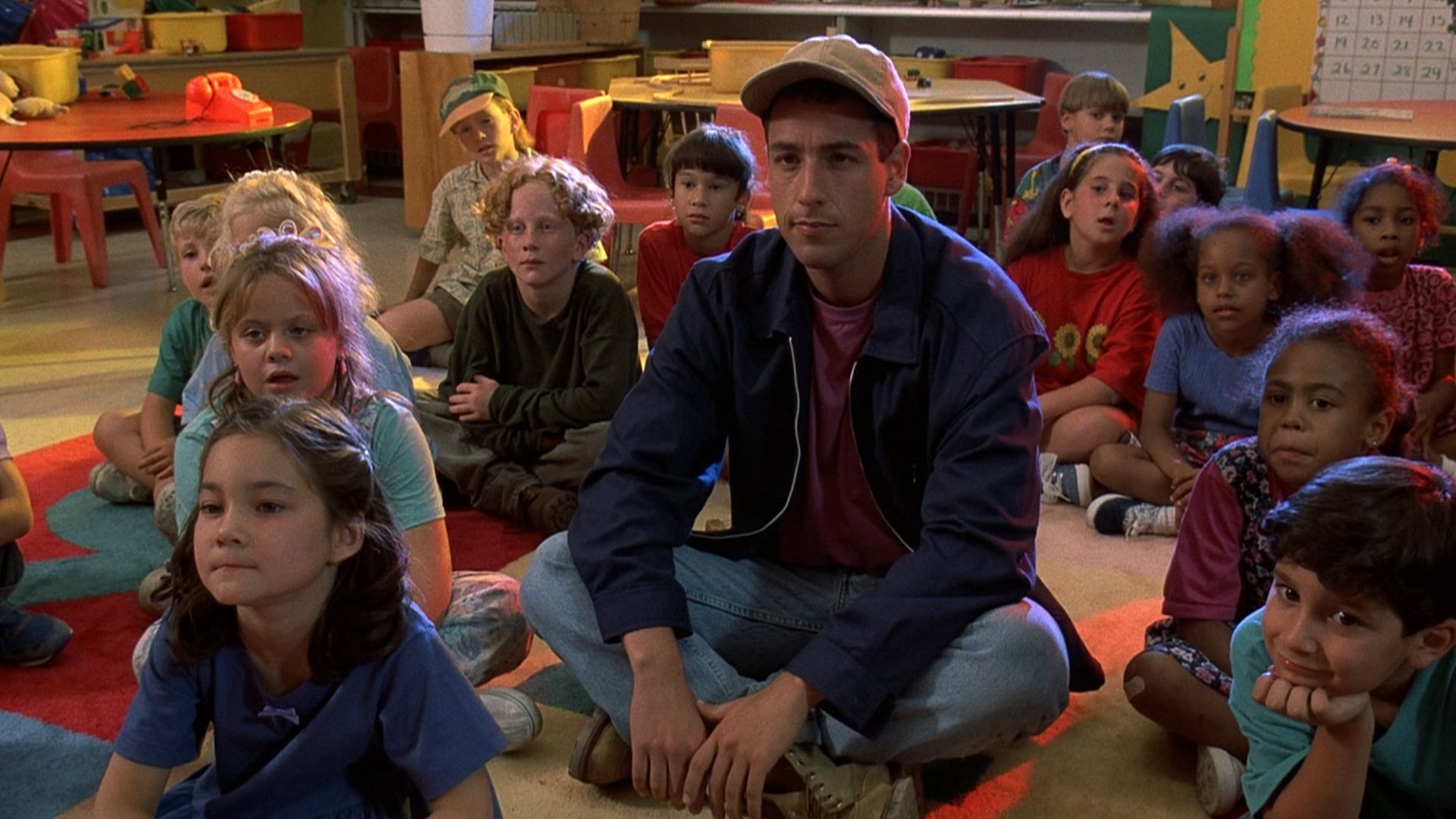 The movie is one of the cheesiest Adam Sandler movies, no wonder it is a favorite of all the 90s kids out there. It is directed by Tamra Davis. Billy Madison stars Adam Sandler, Bradley Whitford, Bridgette Wilson, Norm Macdonald, Darren McGavin, Mark Beltzman, and Larry Hankin in the lead roles.

you would be surprised to know that Billy Madison was written by Sandler and Tim Herlihy. It was produced by Robert Simonds, and additionally, it was also Macdonald’s feature film debut.

In 1995, Billy Madison alone made over $26.4 million worldwide and debuted at number one at the box office. 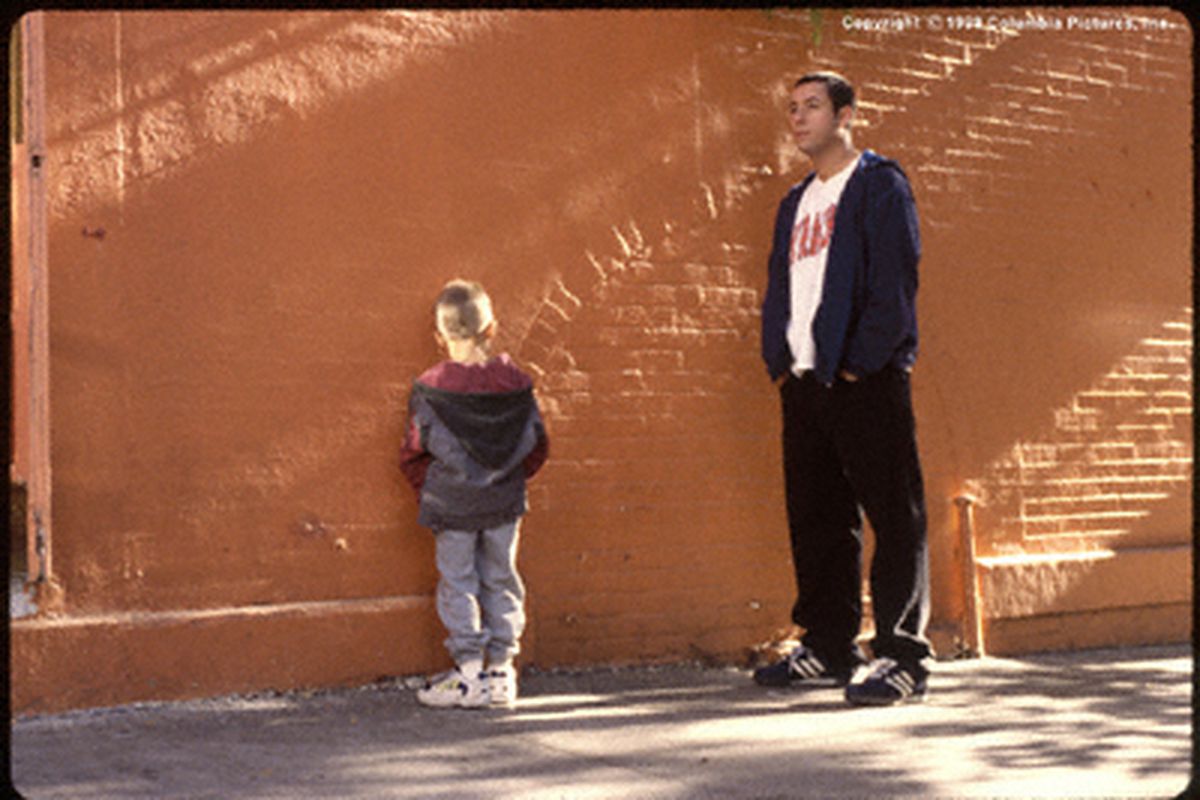 Big Daddy was produced by Robert Simonds. Much like Adam Sandler movies, it opened #1 at the box office. However, it was criticized for a decline in comedy, mostly involving Sandler’s juvenile, over the top, cheeky humor. Nevertheless, it became Adam’s highest-grossing film domestically until Hotel Transylvania 2. 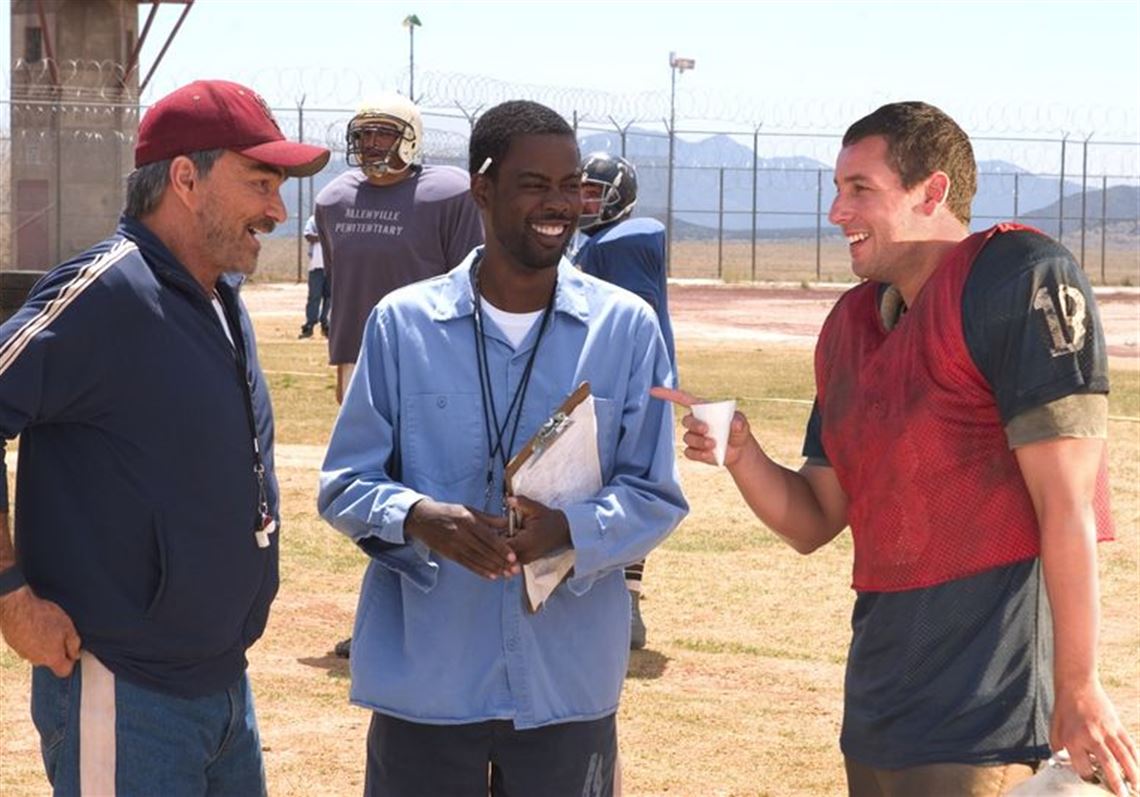 The Longest Yard: the remake of the ’74 classic.

The Longest Yard is a 2005 American prison sports comedy film.

This movie tells the tale of the rugged ex-football star played by Burt Reynolds. It was directed by Peter Segal and written by Sheldon Turner. The Longest Yard is a remake of 1974’s The Longest Yard.

Adam Sandler stars himself as the rowdy former professional quarterback for the Pittsburgh Steelers. In exchange for his participation, he is forced to make a football team to play against the guards. It also has its emotional moments, but more importantly, it is one of those underdog sports films.

The co-stars of The Longest Yard include Chris Rock, James Cromwell, Nelly, William Fichtner, and Burt Reynolds. The Longest Yard has Adam Sandler’s cheeky comedy humor written all over it. 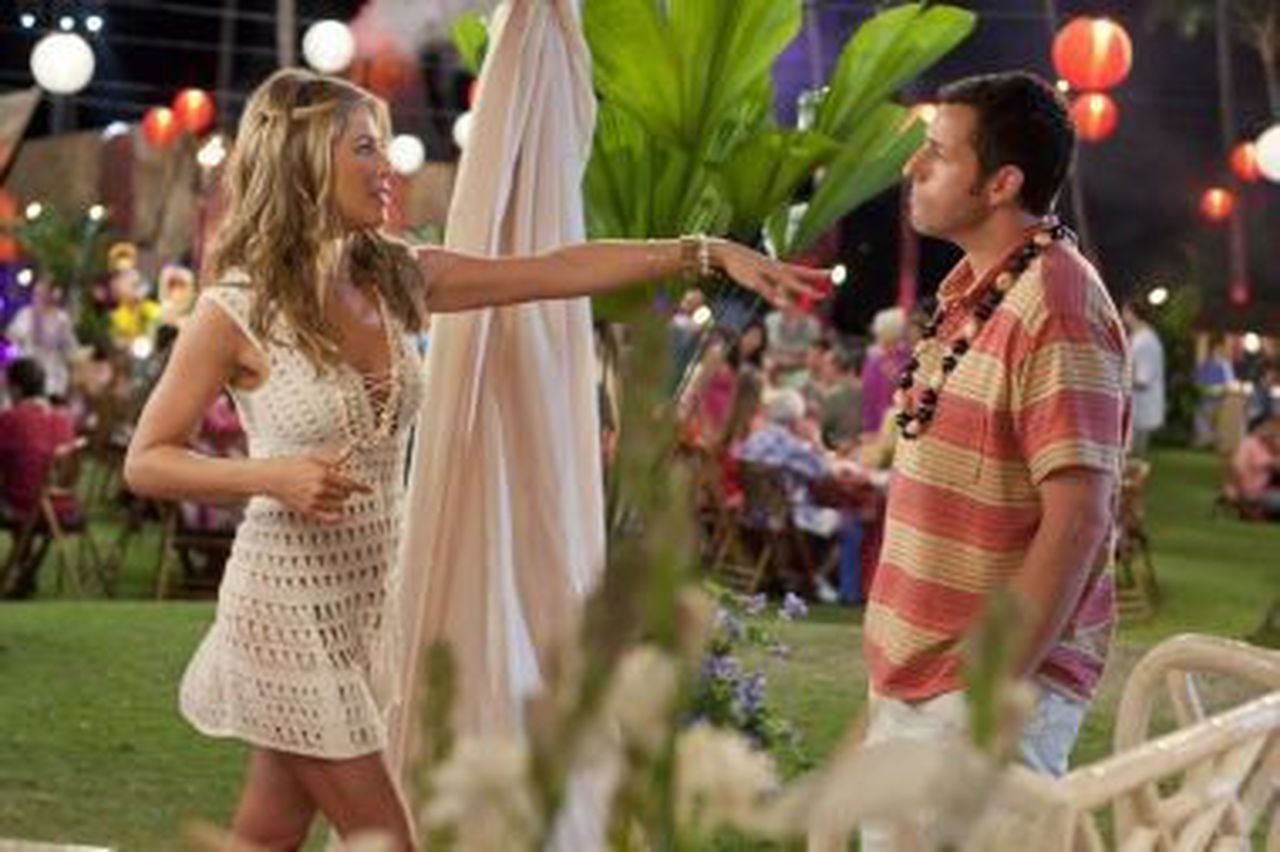 Just Go With It: rests on chemistry between Sandler and Jennifer Aniston.

Just Go with It is a 2011 American romantic comedy film.

The movie, Just Go with It is a breakout Adam Sandler hit! More because it stars former Friends famed actress, Jennifer.

While Just Go With It has an amusing plot and wild chemistry between Adam Sandler and Jennifer Aniston. Due credit should be given to the filmmaker for making a mega-hit out of a nonsensical, “on the nose” plot and lacking nuance kind of a plot.

Just Go With It is directed by Dennis Dugan. It is written by Allan Loeb and Timothy Dowling and it stars Adam Sandler (who also co-produced the film), Jennifer Aniston, Nicole Kidman, Nick Swardson, and Brooklyn Decker in the roles. 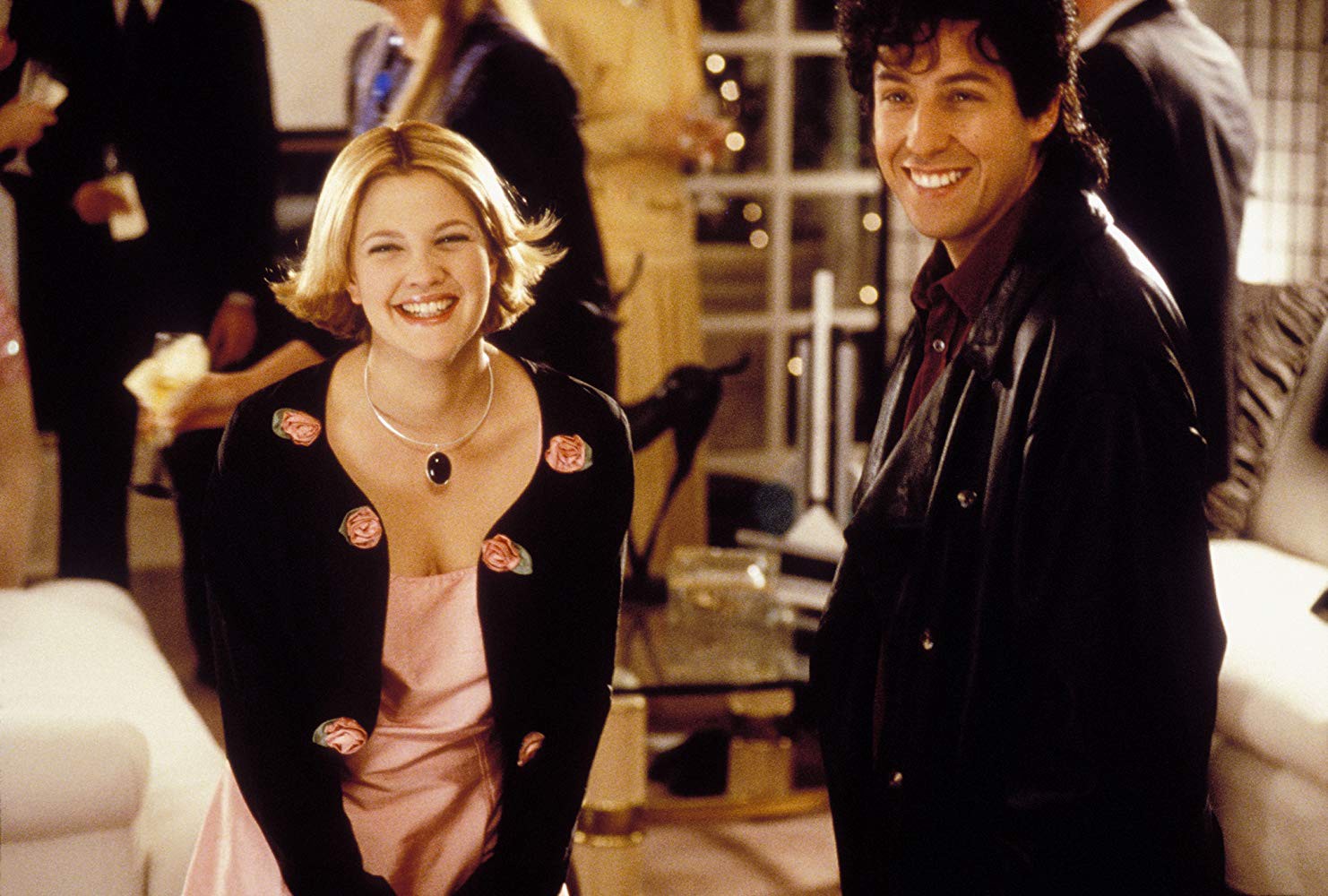 The Wedding Singer is a 1998 American romantic comedy film.

This movie is the most popular Adam Sandler movie. It is directed by Frank Coraci and written by Tim Herlihy.

Besides Adam Sandler, The Wedding Singer stars Drew Barrymore, who plays a waitress. The story is simple, the wedding singer falls in love with the waitress. It has more emotional depth and dramatic moments than any other Adam movie. Besides the holy alliance of Drew and Adam nodes well for it. Truly nuanced performance by Sandler. Adam Sandler plays the protagonist, Robbie, while Drew Barrymore plays Julia.

The Wedding Singer was produced by Robert Simonds. This movie was more of an international hit than a domestic one. It grossed $80.2 million in the United States and $123.3 million worldwide. 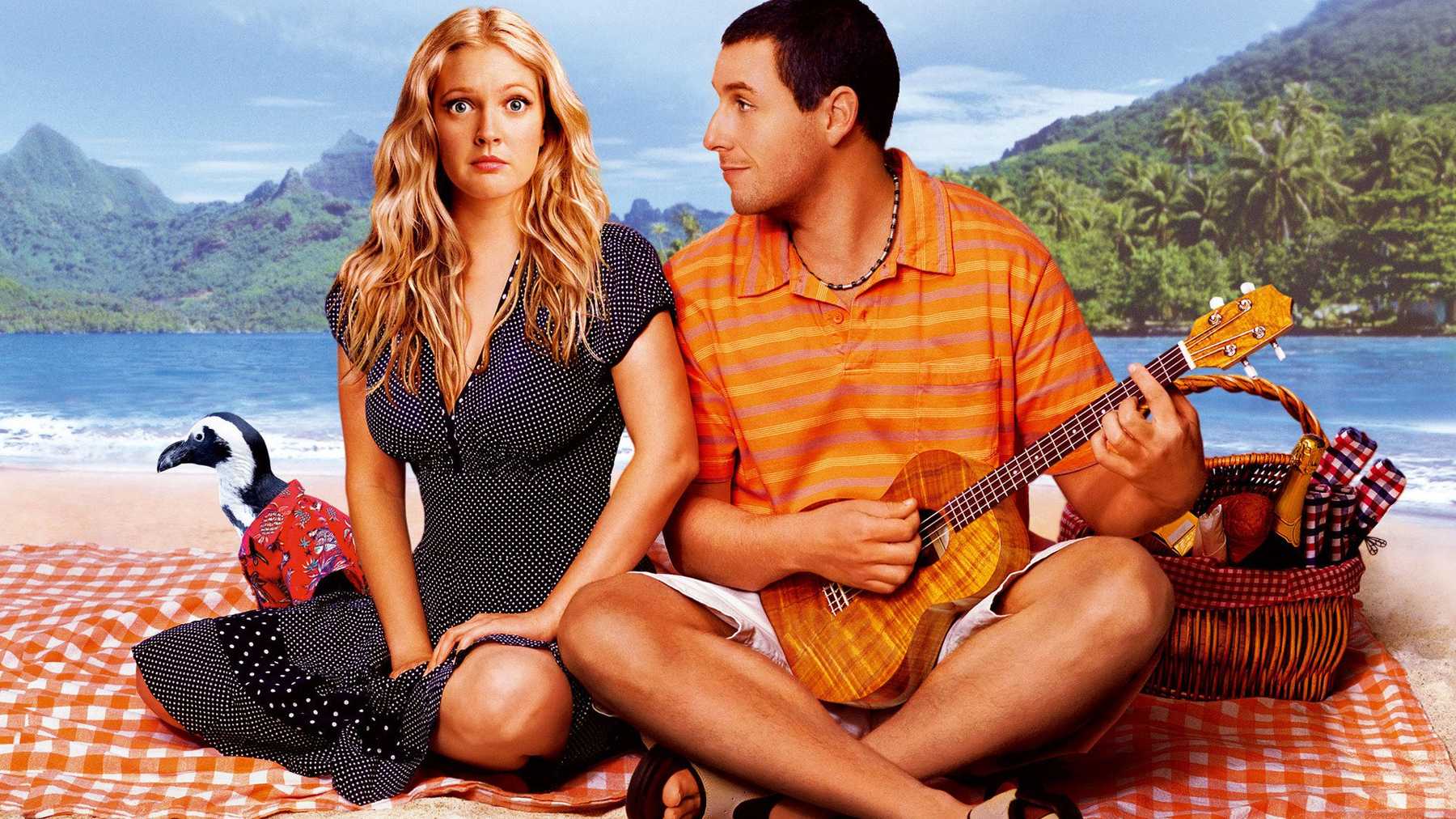 This movie takes Adam Sandler comedy to another level! And once again, the couple Drew and Adam pair together to give a lovely, light-hearted performance.

50 First Dates is directed by Peter Segal. It has a star cast led by Drew Barrymore, Adam Sandler. The rest of the features are of Rob Schneider, Sean Astin, Blake Clark, and Dan Aykroyd. 50 First Dates traces the tale of Henry (Adam) a ladies man. He is a marine veterinarian who falls for an art teacher named Lucy.

As soon as he comes to know, Lucy has anterograde amnesia, he resolves to win her over again each new day. 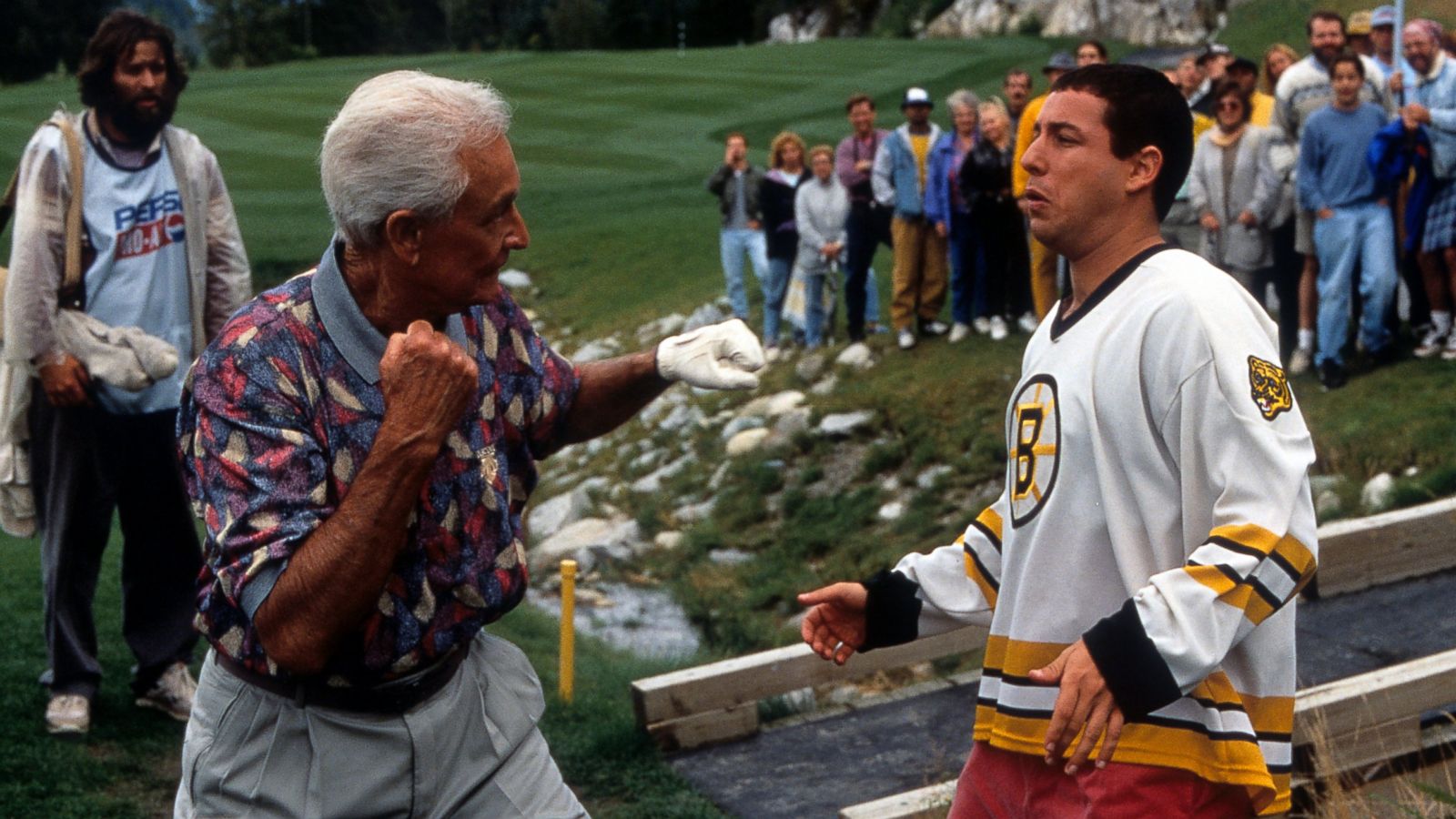 The boxing match between Gilmore and legendary host Bob Barker should be your cue to go watch the movie.

The movie is directed by Dennis Dugan and produced by Robert Simonds. Happy Gilmore stars Adam Sandler as the lead character. The story revolves around an unsuccessful ice hockey player, Adam who discovers a newfound talent for golf. It also features Happy Madison funny cameo.

Happy Gilmore marks the first of multiple collaborations between Sandler and Duga. For a movie made on a low-budget, it won big at the box office (earning $41.2 million on a $12 million budget). It sure is silly, but it’s enjoyable!

This movie is one of a kind for it marks the first time Adam Sandler took the role of a serious protagonist in a serious film. Punch–Drunk Love is directed by Paul Thomas Anderson, the man who gave us the melodrama, Magnolia.

Adam Sandler is an entrepreneur who has severe social anxiety. He is set up on a date with his sister’s co-worker and the two fall in love. It is all peaches and cream until Adam has to defend his love and himself from extortionists. 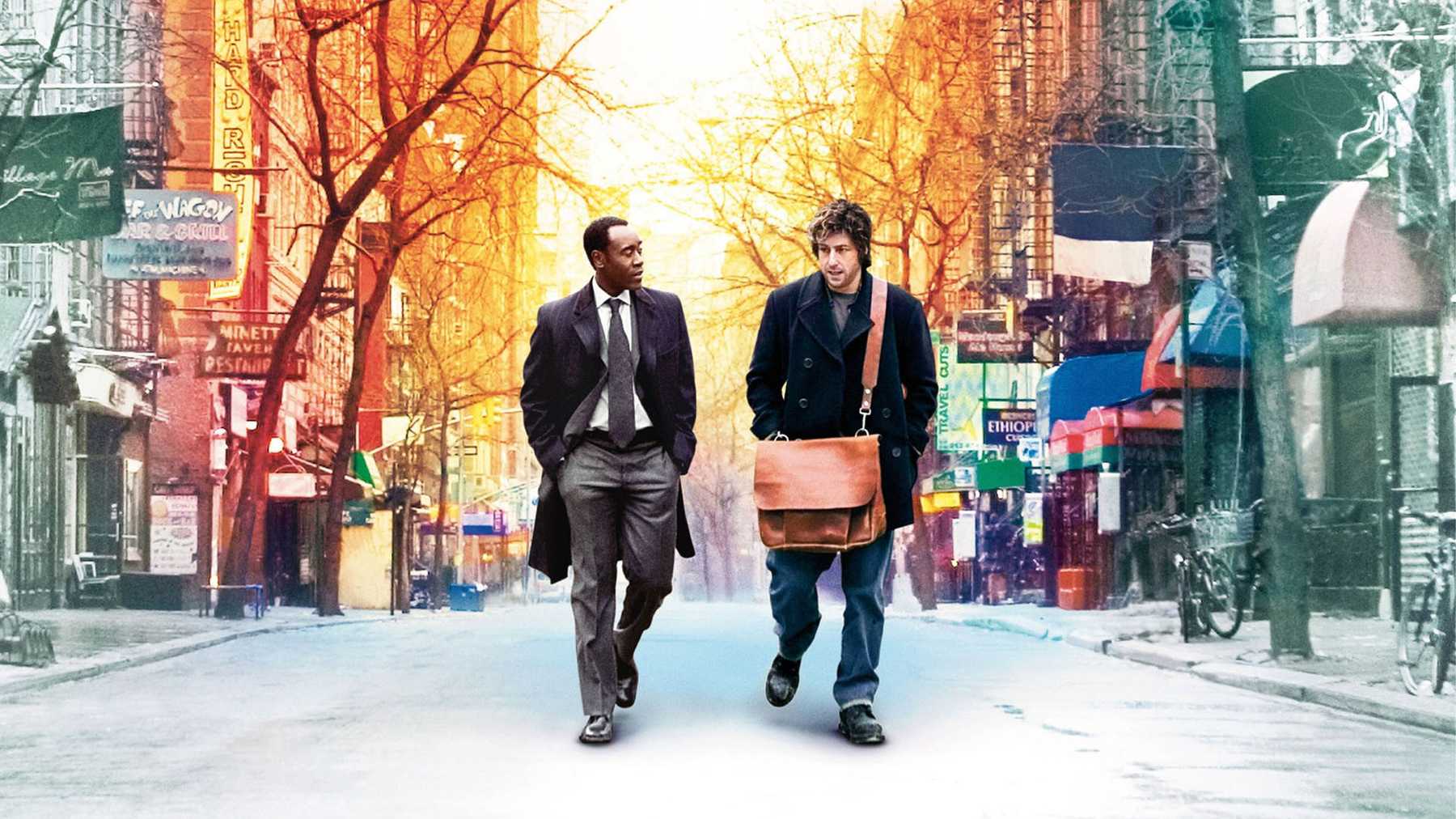 Reign Over Me: unique and heartfelt Adam movie.

Reign Over Me is a 2007 American buddy drama film.

The movie is about Sandler who plays a downtrodden man whose life is shattered following the September 11 World Trade Center attacks. Reign Over Me is written and directed by Mike Binder, and produced by his brother Jack Binder. It is a unique Adam movie, since his last breathtaking performance in Punch–Drunk Love.

There is no slapstick comedy, no Avant grade plot, no “on the nose” theme. It is a highly nuanced performance by Adam Sandler and Don Cheadle. The rest of the cast includes Jada Pinkett Smith, Liv Tyler, Donald Sutherland, Saffron Burrows, and Mike Binder. All of these characters mentioned above are memorable.

All of them rest on a dynamic friendship with Adam Sandler’s character, Charlie. Most of all, his old roommate, Alan plays a very important role in the movie. We honestly say that Reign Over Me is the best film featuring Adam Sandler since PDL. Go watch! 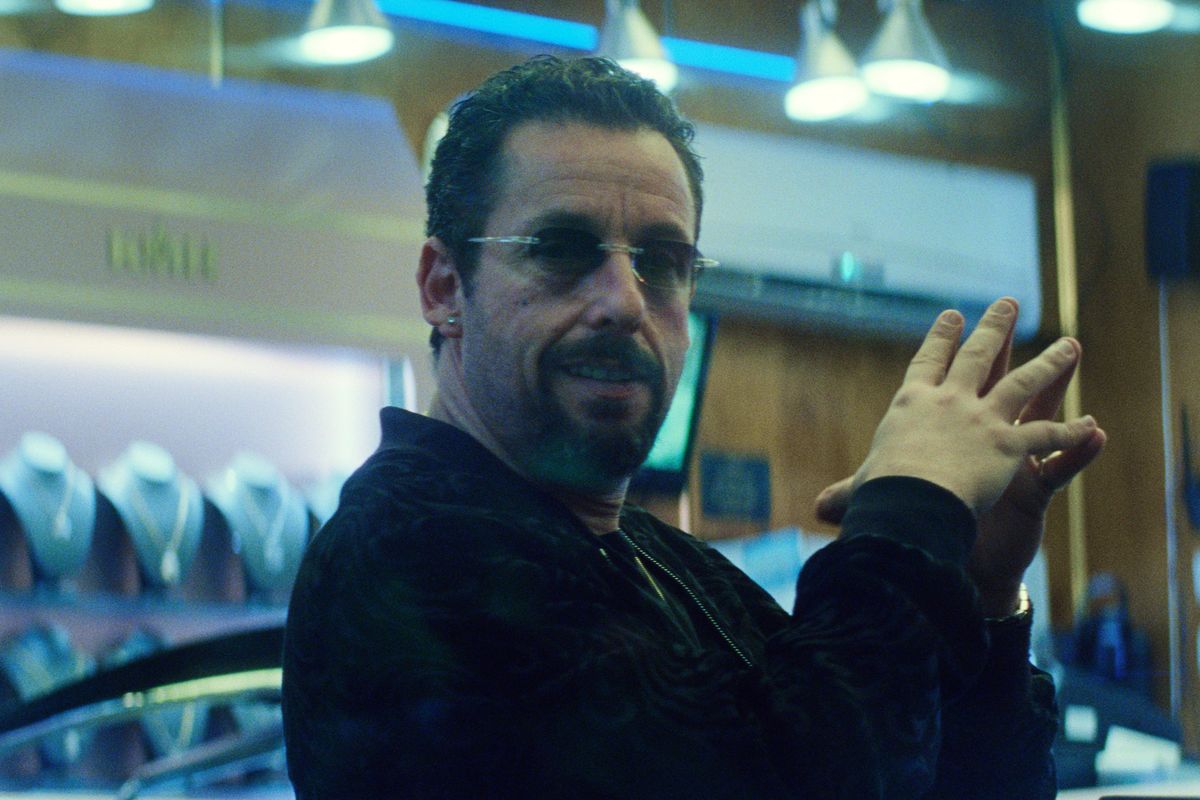 Who would think Adam would come back in 2019 to do a thriller?

Uncut Gems features Adam Sandler stars as Howard Ratner. He is a fast-talking, magnanimous New York City jeweler. He becomes a part of the best that could set him for life. And in the scheme of things, if they go awry, Adam’s life could end.

Uncut Gems is directed by Benny and Josh Safdie. The movie just goes on to prove that Adam Sandler’s art knows no bounds. Honestly, it was plain heartbreaking not to see Sandler get an Oscar nomination for his role in the movie.