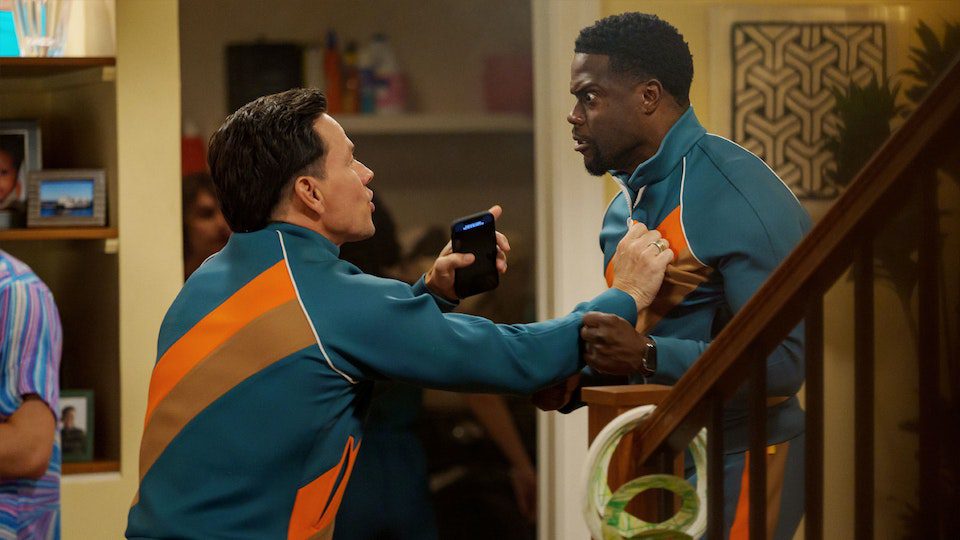 Me Time ending has a very satisfying end for most of the characters in the film. Netflix released the film in August, and it serves as a perfect “end of the summer” watch. The film is a comedy-drama story that places actor Kevin Hart in the lead. He is a family guy who tries to support his working wife, who is an amazing architect. Kevin reprises the role of Sonny Fisher. We see the film beginning with him taking care of the kids as his wife leaves for work. While talking to other parents at the school, he discovers that he has no life of his own and is just stuck taking care of his children and working for the school.

One of the parents at the conference motivates him to have some me time for a week in the summer as his wife leaves to visit her parents along with the kids. He agrees with the same but is truly bored when he understands that spending time alone is very boring. One of his oldest friends Huck who still goes on wild party drives and invites him over for his 44th birthday. Sonny knows that Huck’s party is going to be wild and thus, is hesitant to go over. Although, given the obvious boredom that he is in, Sonny decides to do the same.

Sonny is overly jealous of Maya, his wife, and her client Armando being too friendly with her. After Huck’s party gets canceled because he still needs to repay his money to a loan shark, Huck and Sonny decide to wreck Armando’s place out of envy. While doing a silent protest which will surely disturb the owner, they accidentally break the shell of his oldest turtle named Ol’Snappy. They then drop it off at an animal hospital and drive away. Soon, Huck asks Sonny to shift the party over to the house, which he does. A still from Me Time of Kevin Hart as Sonny Fisher

Upon reaching their home, Sonny is uncomfortable with the number of people that have shown up. Although, all his doubts go away when his favorite singer, Seal, is here to perform. He plays the keyboard while the artist sings one of his songs. Later, we see that Huck decides to move away to some other country in order to escape the wrath of the loan shark and his assistant who is after him. Although Sonny decides to help his friend and loan him 47,000 dollars of debt which Huck promises to pay back later.

Although Maya arrives at the scene and already knows about how the two of them broke Ol’Snappy, Armando’s tortoise. She is very angry at him and leaves with the kids after knowing that Sonny has also spent their previously saved money to save Huck. Everything feels torn apart as Sonny ends the party and takes it out on Huck. He blames him for not ever being serious about his life, and now he has ended up in debt because of his bad money spending habits on useless stuff.

During the climax of the film Me Time, we see that Sonny gets his 47,000 dollars back from the loan shark. He is surprised and goes over to meet with Huck to discuss the matter. Turns out, Huck has instead decided to repay the entire loan himself by working for the loan shark. Sonny chimes in once again and saves the day. He agrees to help Huck build his life again from scratch so that he can repay the debt. Given the fact that Sonny is a stay-at-home father, he has a lot of potentials to open a small business in their town.

Me Time ending gave us a lot of thrill as Sonny and Huck decide to stay together and open up a new business together as partners. Maya is also happy otherwise as she tries to open her own architectural firm with the help of Armando. The two friends decided that they would be event planners for kids’ birthday parties. Given the fact that Huck is known for throwing some of the most amazing parties and Sonny is great with the kids, the two make an excellent team together.