The new Team 7 under the leadership of captain Sarada Uchiha is seemingly having a very hard time getting rid of Boro. All the members of the team have used one of their powerful techniques to eliminate Boro but it all went in vain looking at the regenerative powers of Boro.

Kawaki used his body manipulation to cut his parts off, Boruto used his Rasengan backed by Karma to cut half of Boro’s body. Mitsuki and Sarada Uchiha also tried their hands and Sarada even used fire release jutsu at a point-blank range but all of this was not enough to kill Boro. There didn’t seem to be a way to defeat him until Kawaki came up with a plan.

Kawaki told Sarada Uchiha that even though Boro seems invincible he too has a shortcoming. It was revealed that every Kara member has a modified body with a core inside which regulates everything including their regenerative powers. He told her to use her Sharingan and observe each and every movement of Boro closely and locate this core in his body.

As we already know that Sharingan has the abilities that normal eyes do not possess. This ultimately was proved by Sarada Uchiha who was able to locate a moving part inside Boro’s body with her Sharingan but since Boro could move it at any point he could not notify her team about it because Boro would change its location again. 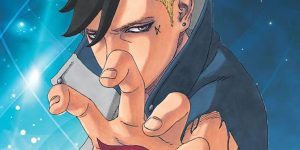 Thus, in order to eliminate Boro Sarada Uchiha had to do it with her own hands, she needed a jutsu so quick and lethal that Boro would not have even a moment to change the location of his core within his body. To everyone’s surprise, Sarada Uchiha took a technique out of his father’s arsenal known as Chidori. This is a lighting release technique capable of piercing almost anything in a flash. Sarada aimed for Boro’s core using this technique. Whether or not this ability is enough to finally kill Boro remains to be seen.