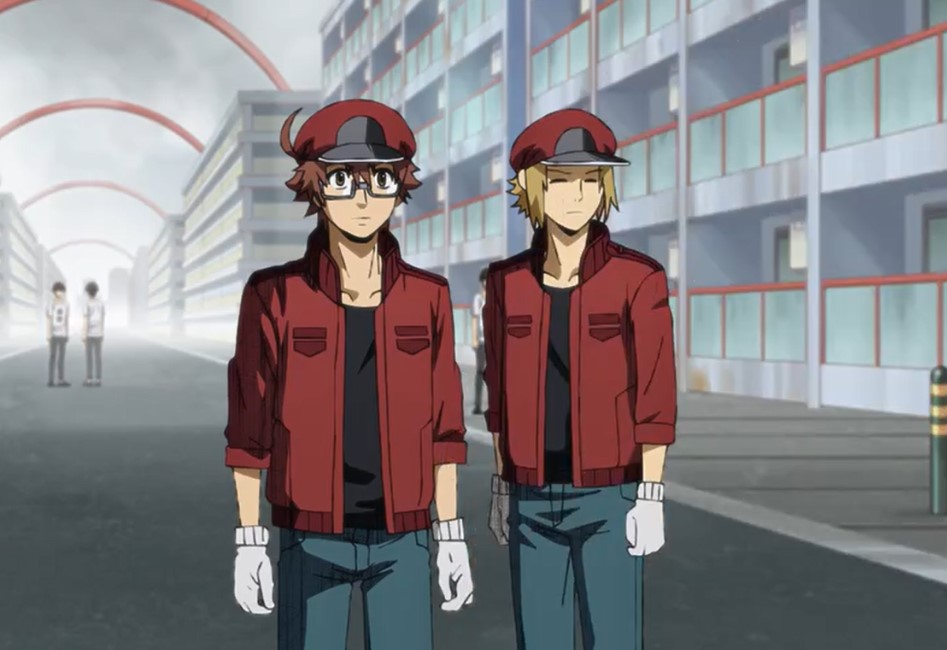 AC delivered oxygen to an Ordinary Cell that used it and turned into an old guy. The Ordinary Cell grabs AC by the collar, telling him that it is his fault that he looks too old. AC asks why, and the guy comments that AC’s oxygen has made him look old. The Ordinary Cell got taken care of, and AC left wondering why he always messes up. Other Ordinary Cells keep on gossiping about how AC works.

Ordinary Cells reveals that the ROS is responsible for the guy who went rampaging and changes into an old guy. Reactive Oxygen Species are highly oxidative and can cause cellular aging. The Ordinary Cell complains that they are not getting enough nutrients, and they cannot go on like this. Two punks confront AC asking him about the incident that causes one of them to get older. They told AC that if he continues with that, they will make him pay.

Cells at Work Code Black Episode 8 will be released on Friday, 12 February 2021, at 2:30 AM. Cella at Work is also available on the official website at saibou-black.com. You can also enjoy watching this Anime on AnimeLab and Funimation. Take a look at the updates below.

The two punks think that the oxygen turned into ROS because he couldn’t handle it properly. They ask AC what he is going to do to make it right, and AA interferes. He told them that they have the wrong ideas. What they deliver is oxygen, and there is no question about it. AA comments that he was told that when oxygen turns into ROS, it is caused by the body’s latent environment. The risk factors for increasing the production of ROS include an inadequate supply of nutrients.

That is caused by lack of Vitamin E due to aging or improper diet, smoking, and ultraviolet exposure. AA told the two punks to stop pointing fingers and analyze the situation. He told them that they could work together for the sake of the safety of the world. The two punks just left, nodding their heads, and AC is glad that AA has helped him. AA comments that they knew that the oxygen they deliver might end up hurting the cells.

AA reminds AC about the upcoming award ceremony for rookie Red Blood Cells. Later the leader of the Red Blood Cells addresses the Cells. The ceremony has started when AA is dozing off. The leader announces that the winner of this term’s Top Rookie Award for delivering the most oxygen is AA. He asks AA to come to the stage, and he gives him his award. Other Cells were surprised why AC was not called since they two are always together.

AC has woke up after hearing that AA has won the award, but he knows that AA deserves it. He realizes that all the time when they are in trouble, they always think about running. AC remembers when they were facing monsters, and he suggested that they should run but AA refuse. That day AA was ready to sacrifice his life, but AC wanted to save his life by running. AC thinks that AA is leaving him behind, and he started to feel jealous.

Everyone cheers for AA, but AC just left without saying anything, and AA notices that. Two hunks came near AC, giving him bad ideas. They tease him that he is just like a loser like them since he didn’t win anything. They told him about the idea that will help him boost his performance, but he refuses. The two hunks think that AC will join the one day. AA met with AC doing his daily routine and started to talk with him about the work.

AC thinks that he is not on the same level as AC and he is weak, and he is also holding back AA. He told AA that he doesn’t have to slow down because of him since he is a top Rookie. AA tries to reason with jealousy AC who told him to be happy about it. AA apologizes and told AC that they had not visited Hair Matric for a long time. The two manage to get along again despite AC’s jealousy.

When they get inside the Hair Matrix territory, they find that there was no hair. AA confronts the Hair Matrix Cell and asks them what is happening. They told him what has happened and show the path to their next delivery. They manage to deliver the oxygen, but they encountered a ROS incident. AA and AC worked together along with other cells to solve the problem. AC is glad that he is improving while working with AA.

That was all about Cell at Work Episode 8; next episode, take a look at other details here: Cells at Work Code Black Episode 7.