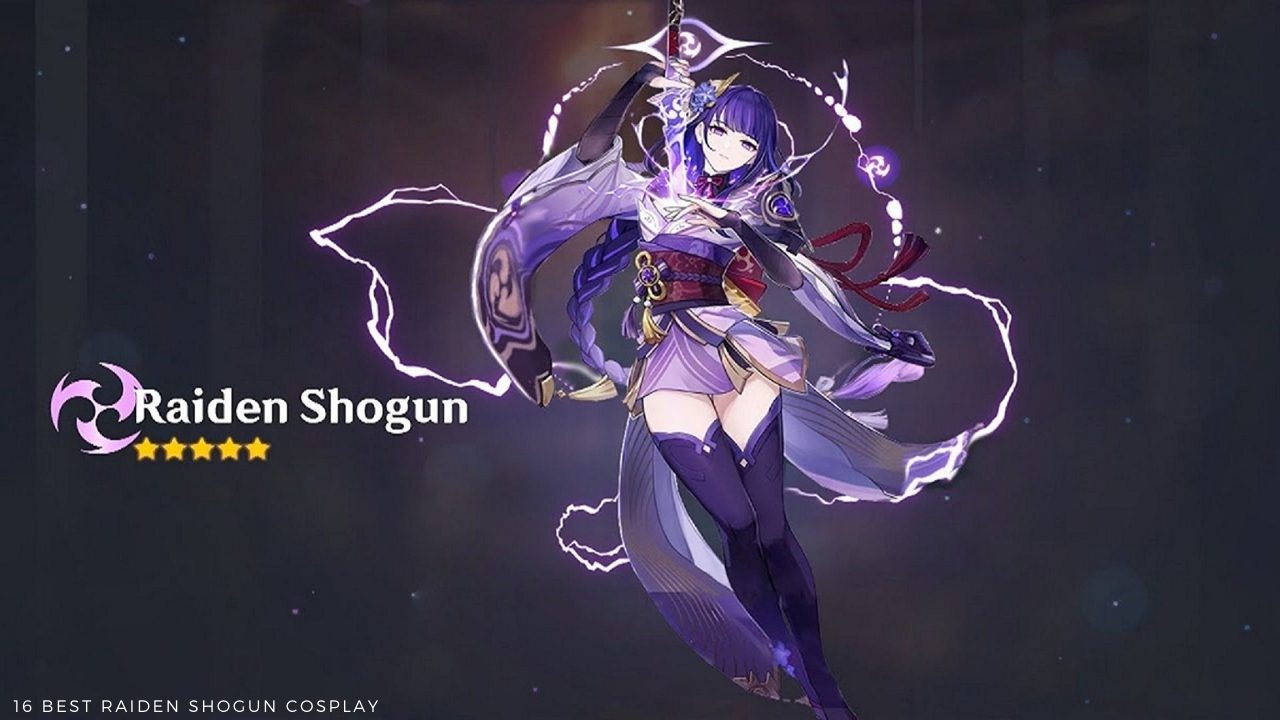 People often go to extremes to display their love for a certain thing or certain someone. The same goes for video games and it’s characters. They often create a fandom or join one so that they can communicate with like-minded people. If they love a certain video game or their characters, they will create a fan-art for that or even fanfiction. One of the things that sure catches the eyes of the audience and people in general, is cosplay. And we sure do love some cosplay *wink wink*. In this article, we would be talking about the 16 best Raiden Shogun cosplay. Along with that, we will also be looking into the character and game itself.

Now keeping that aside for a while, let’s talk about cosplay. Cosplaying is the practice of dressing up as a character from a film, book, or video game. People do this to show admiration for a certain character or subject in general. It used to be unusual when it first started out, but later more and more people started understanding the concept and they themselves started practicing it. There are many famous cosplay artists on Instagram and some of them do charge a certain fee for their exclusive content. While others just enjoy what they are doing and want to show it to their audience.

Raiden Shogun is a playable Electro character from the popular game, Genshin Impact. She can control a puppet while meditating inside the Plane of Euthymia. Her current form is the vessel of Beelzebul who is currently the Electro Archon of Inazuma. For those living under a rock, Genshin Impact is an action RPG (role-playing game) developed by Chinese game studio miHoYo. It is an open-world game available to play on Windows, PlayStation, Android, and iOS.

Raiden is fairly difficult to pull off. Her dead eyes and physique are the toughest. Her hair is also a bit tough but not impossible. The costume will take some time but if you have a good tailor or you yourself have the handy skills, it can look quite good. Raiden herself is so beautiful and that’s one of the reasons why girls go for her. The other reason being, she is the newest character in the game right now.

Cosplayer Scarlett Sirene completely nailed the look Raiden Shogun. She perfectly portrayed her dead eyes and expression while keeping that fair bit of innocence on her face. The costume looks amazing, but it could have a little bit more tint of purple. The hairs on the other hand look good but they are not long enough. While Raiden keeps the sides of her hair free and the rest in a tail, here it seems Scarlett kept her hair open. 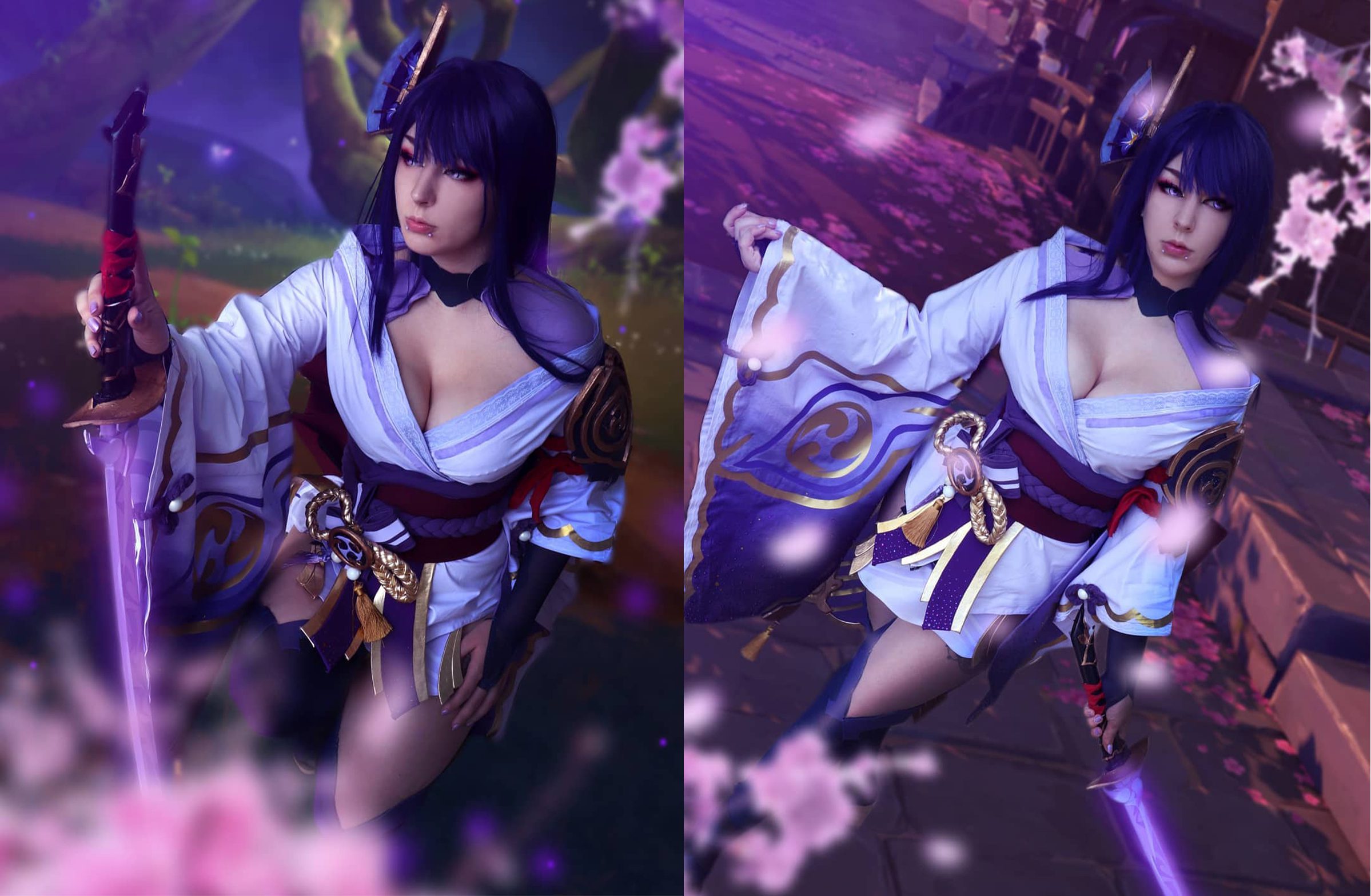 From hairs to dress to face to prop, Roxanne Kho portrayed Raiden perfectly. Her hair looks good and it is just how Raiden keeps her hair. Her costume is perfect too, the colors are not too bright neither too much faded. Makeup and expressions are the selling point of this cosplay. Sword also looks great but, in the picture to the left, it looks like she has used a different sword as supposed to the one on right. 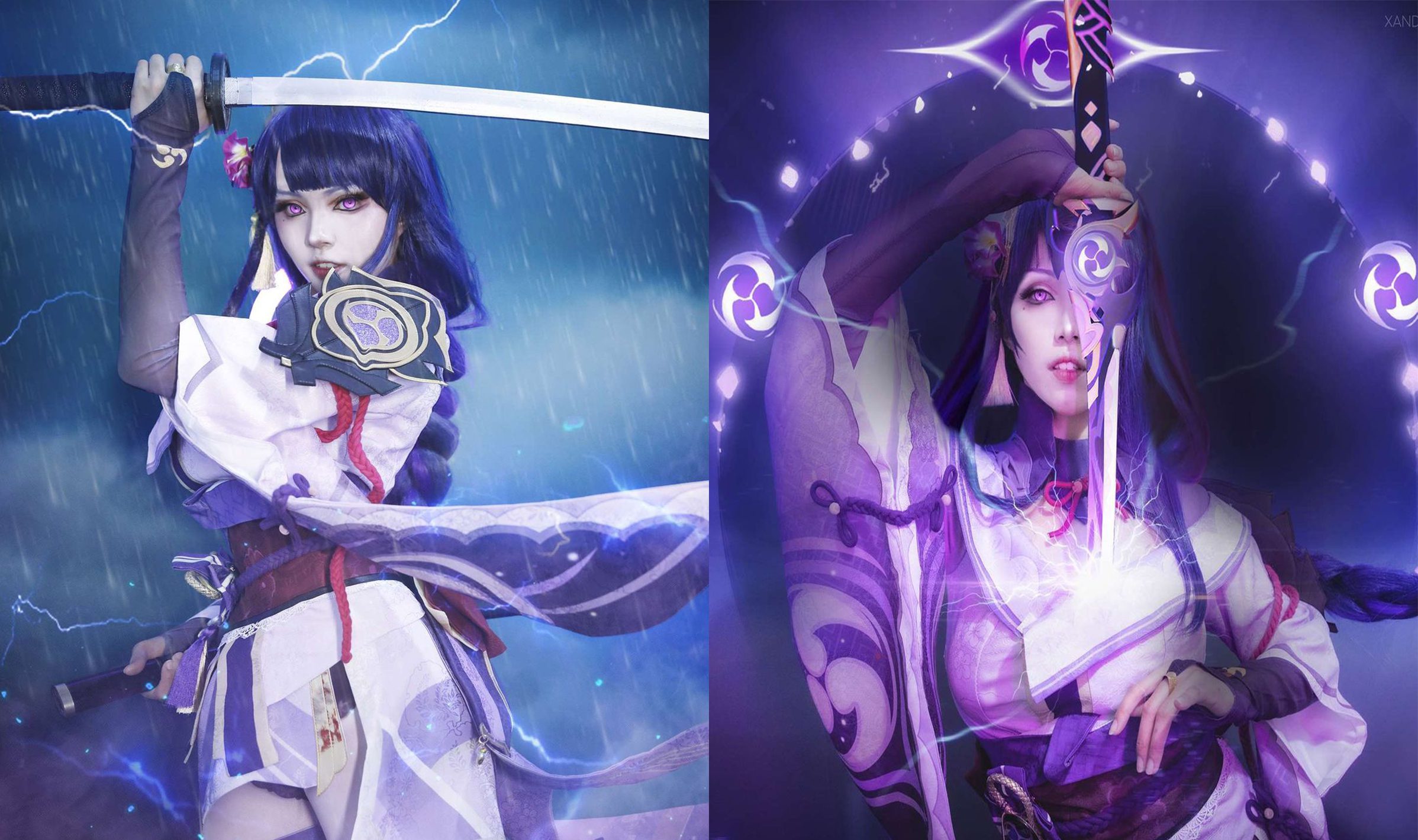 This Chinese cosplayer has played her part to perfection. She got everything right from head to toe. If there were ever to be a live-action Genshin Impact movie, I bet Zhenzi could definitely play the part of Raiden. Her physique and her face truly resemble the character. The only thing that could have been better is the sword. 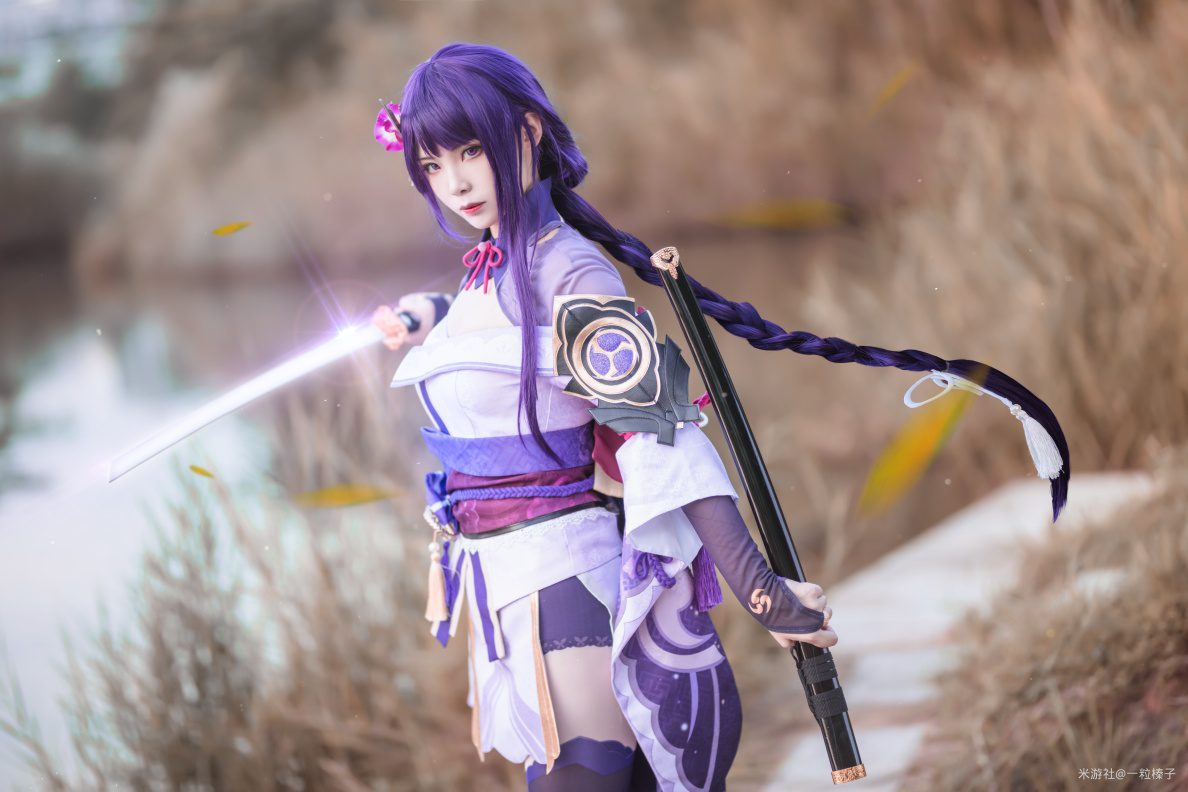 Cosplayer Kuri Cortez did an amazing job cosplaying as Raiden Shogun. She got almost everything right. The only thing missing from her cosplay is the prop, the sword. Her hair is just perfect. 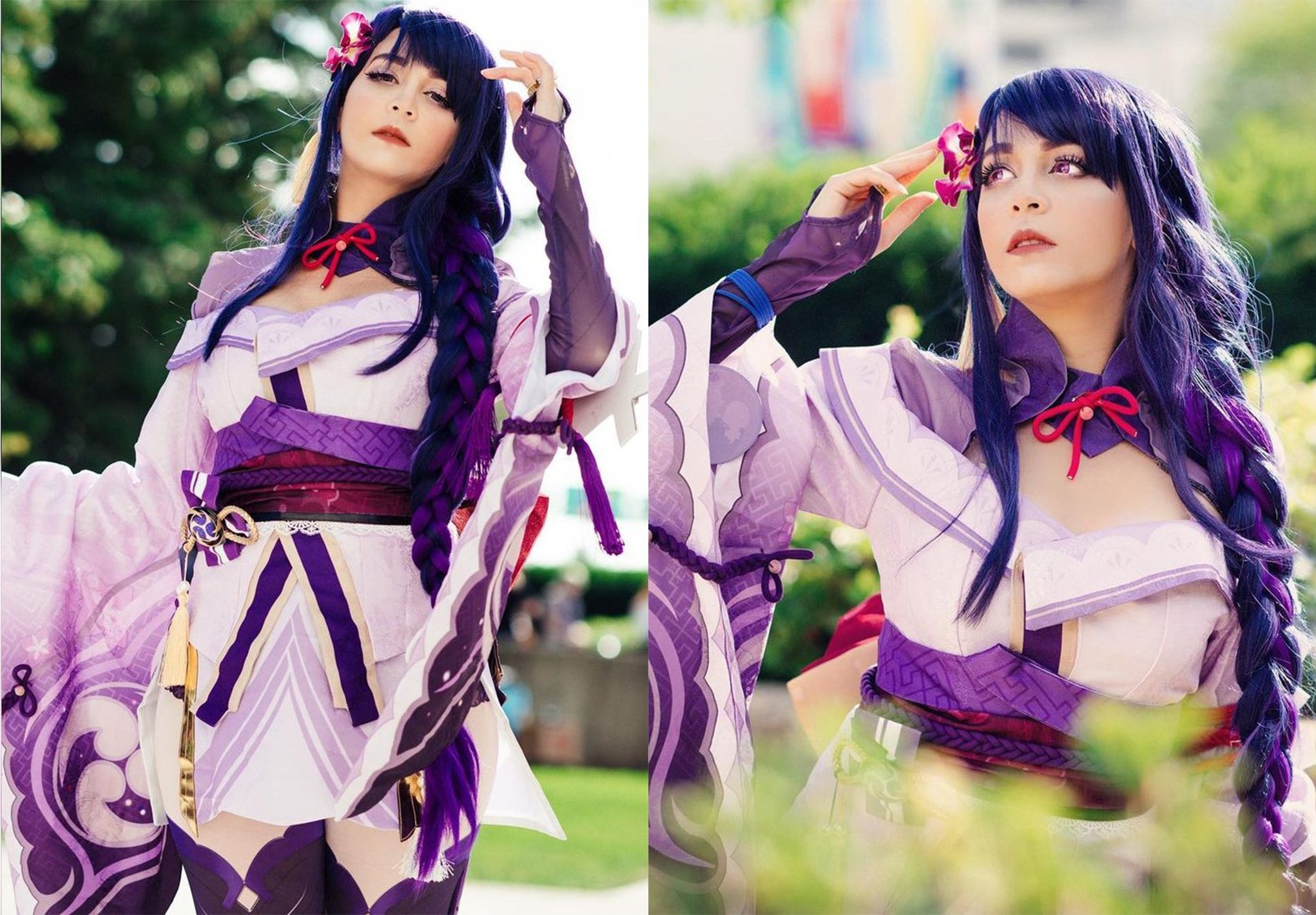 Another one on the list is Yoru. She looks fabulous in Raiden Shogun cosplay. Her outfit is great, but it could have been just a smidge lighter. Other than that, it’s just so good. 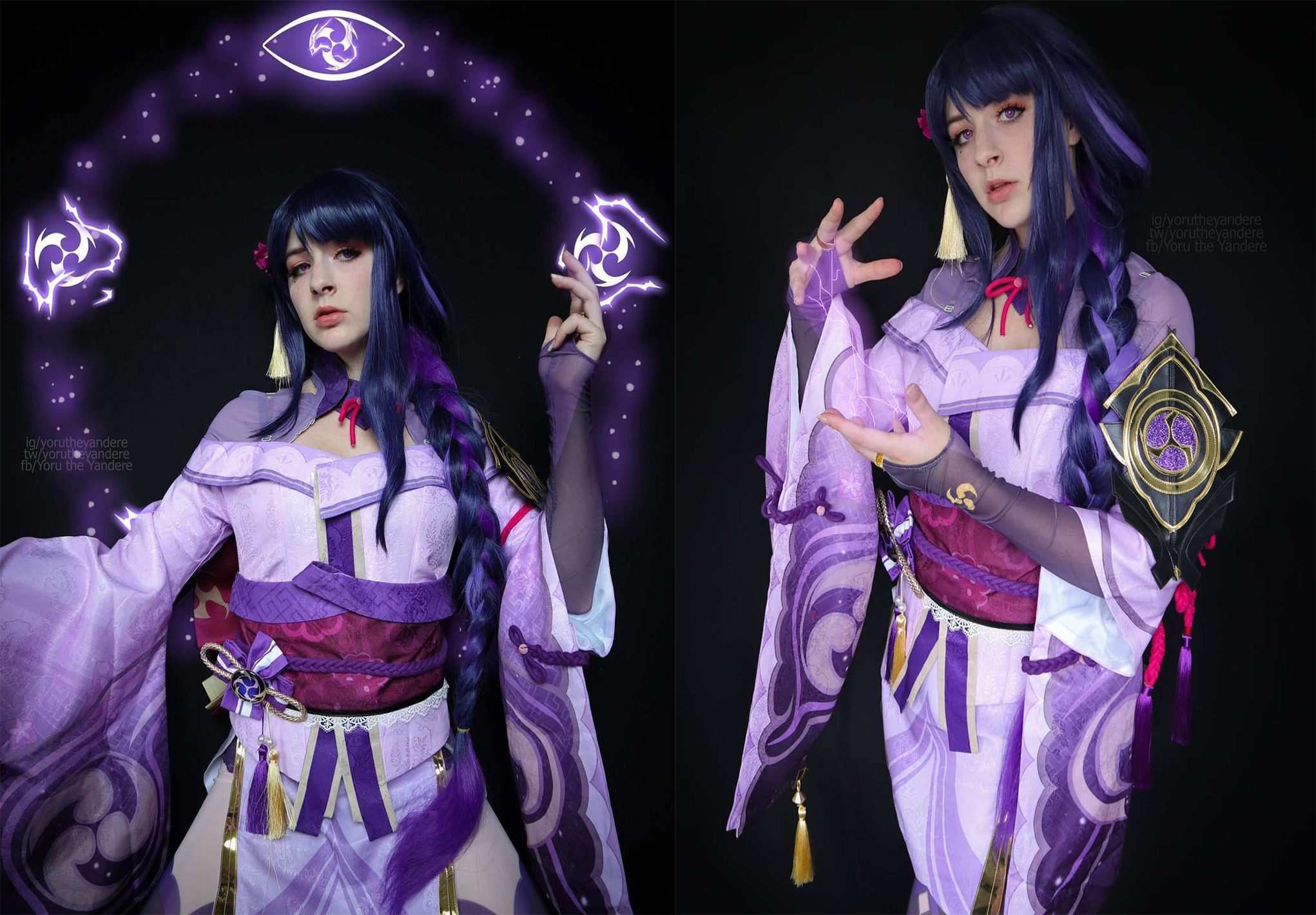 Next on the list, cosplayer that goes by the name fuyukimika on Instagram. And, just wow. She got every aspect of the costume just right. Only if she would have put some effort into the sword. Other than that, fabulous work and she deserved her spot on this list. 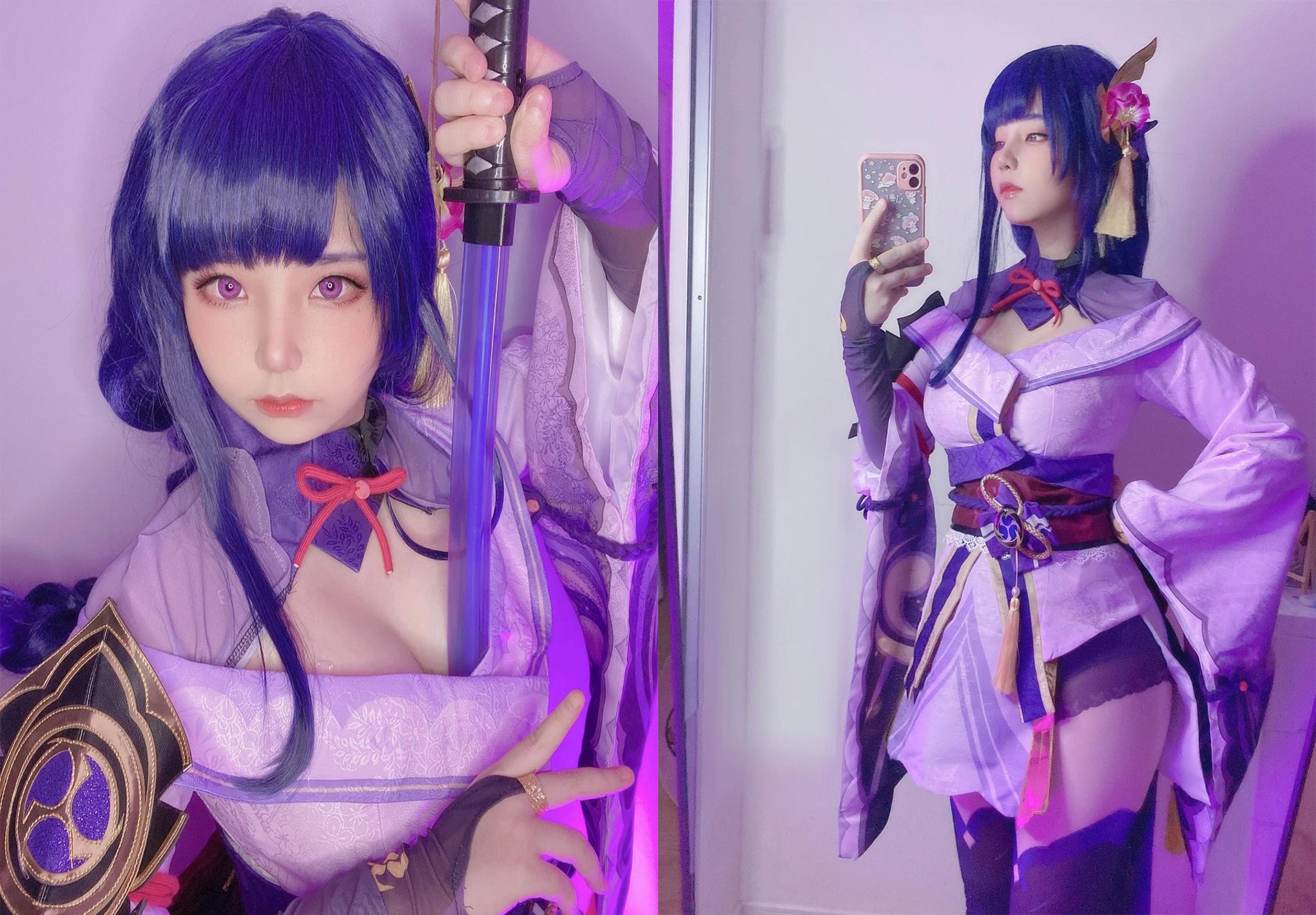 Also read: What Is A Mirrorless Camera And How It Is Better Than DSLR?

Larissa Rochefort is a famous Japanese cosplayer. She has 455k followers on Instagram. And her work really shows why she is so popular and has a fan base. Her Raiden Shogun cosplay is perfect, it is the best. Her cute face and petite physique really pull off the Raiden cosplay.

Did you Get Raiden Shogun? I got Raiden Shogun C1 + Engulfing Lightning, Keqing, Mona, Skyward Spine and Amos Bow during my livestream 🤣👌🏻✨

Here’s another Chinese cosplayer, Tako, social media handle name takomayuyi. She had to be on this list for the obvious reason of nailing the look. She lacks the prop sword in her cosplay but overall she did pretty well.

Irene really did go all out for her cosplay. She looks absolutely amazing. Her photos from the photo shoot can be found on her Twitter page. She did however forgot the sword, man people keep forgetting the sword. Anyways, her costume, her hair, make-up, everything is on point. 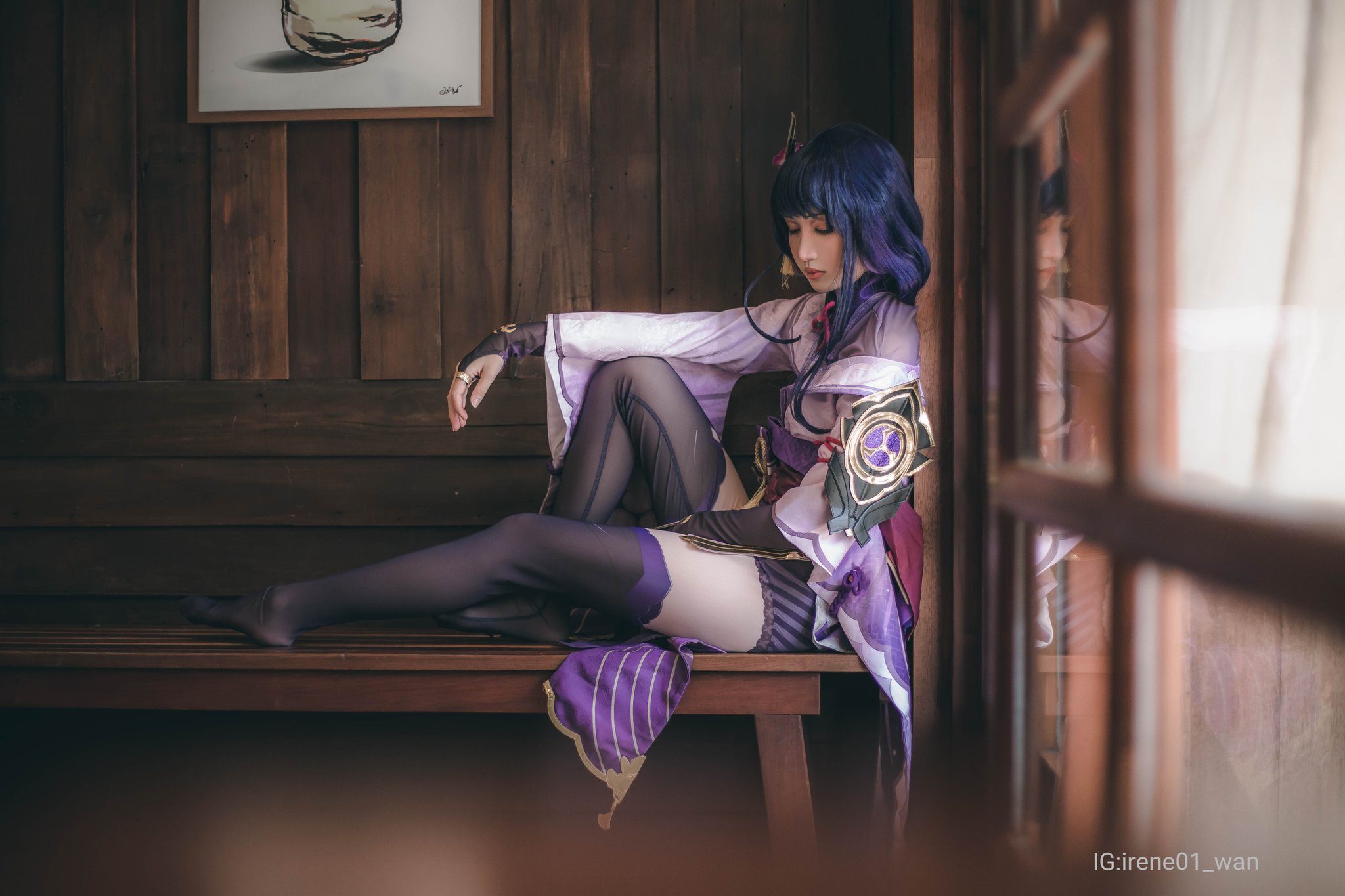 This Russian cosplayer did very well in terms of portraying Raiden Shogun. Alin Ma’s outfit is especially amazing. It perfectly matches the one Raiden wears. I guess she did borrow it from Raiden after all and the sword too, but who knows.

My cosplay for Raiden Shogun, I wanted to do her so bad , hope you like it!☺️💜
Raiden Shogun is the main photo set for this month and will be available at the end of month on my P🅰tre🅾n

This Brazilian cosplayer really did just steal my heart. Farah’s cosplay of Raiden Shogun is just so good. Every aspect of her cosplay is amazing. From eyes, hair, and make-up, everything is just perfect. Oh, and this time around, we got to see the sword as well. So kudos to not forgetting the important prop. 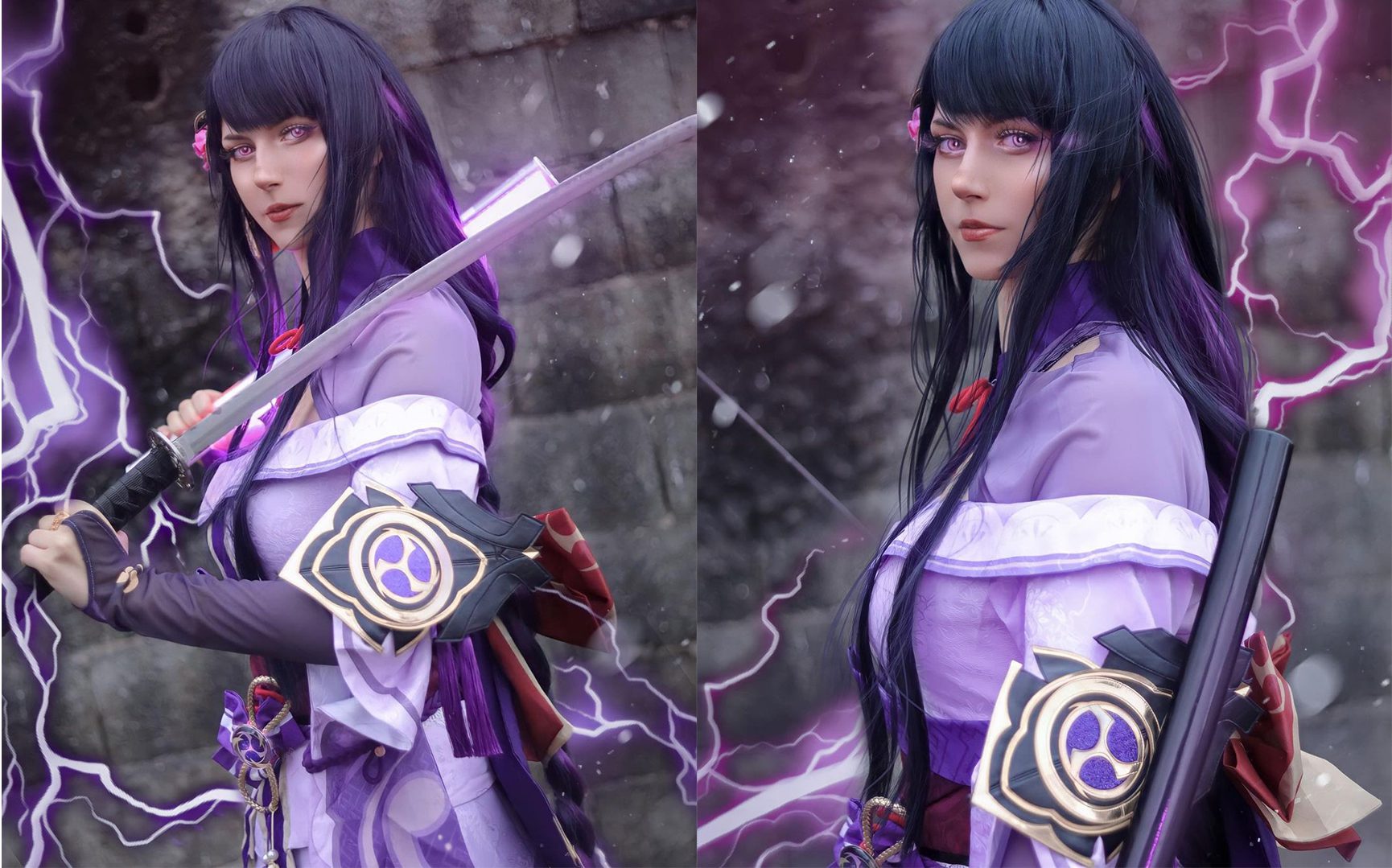 If there was ever an award for Cutest Raiden Shogun Cosplay, it would definitely go to Azuka. She looks so pretty, almost dreamy. Everything from her face to her dress looks superb. I just can’t get over how cute she looks. 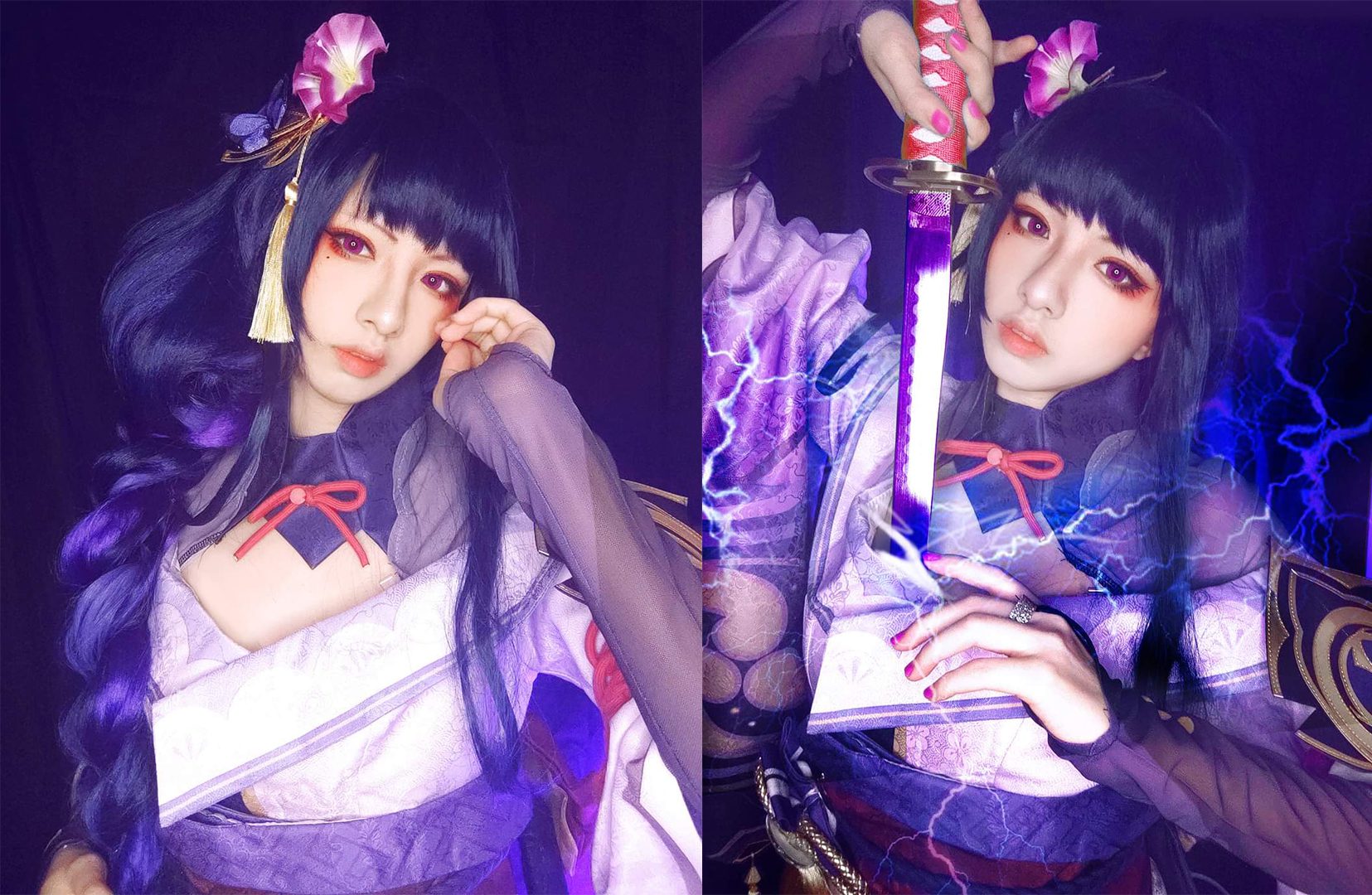 Next on the list goes by the Instagram handle, talla_cos. This cosplayer did put a fair amount of effort into her Raiden Shogun cosplay. She almost looks like Raiden herself. And she is beautiful. Her costume is perfect and so is her hair. 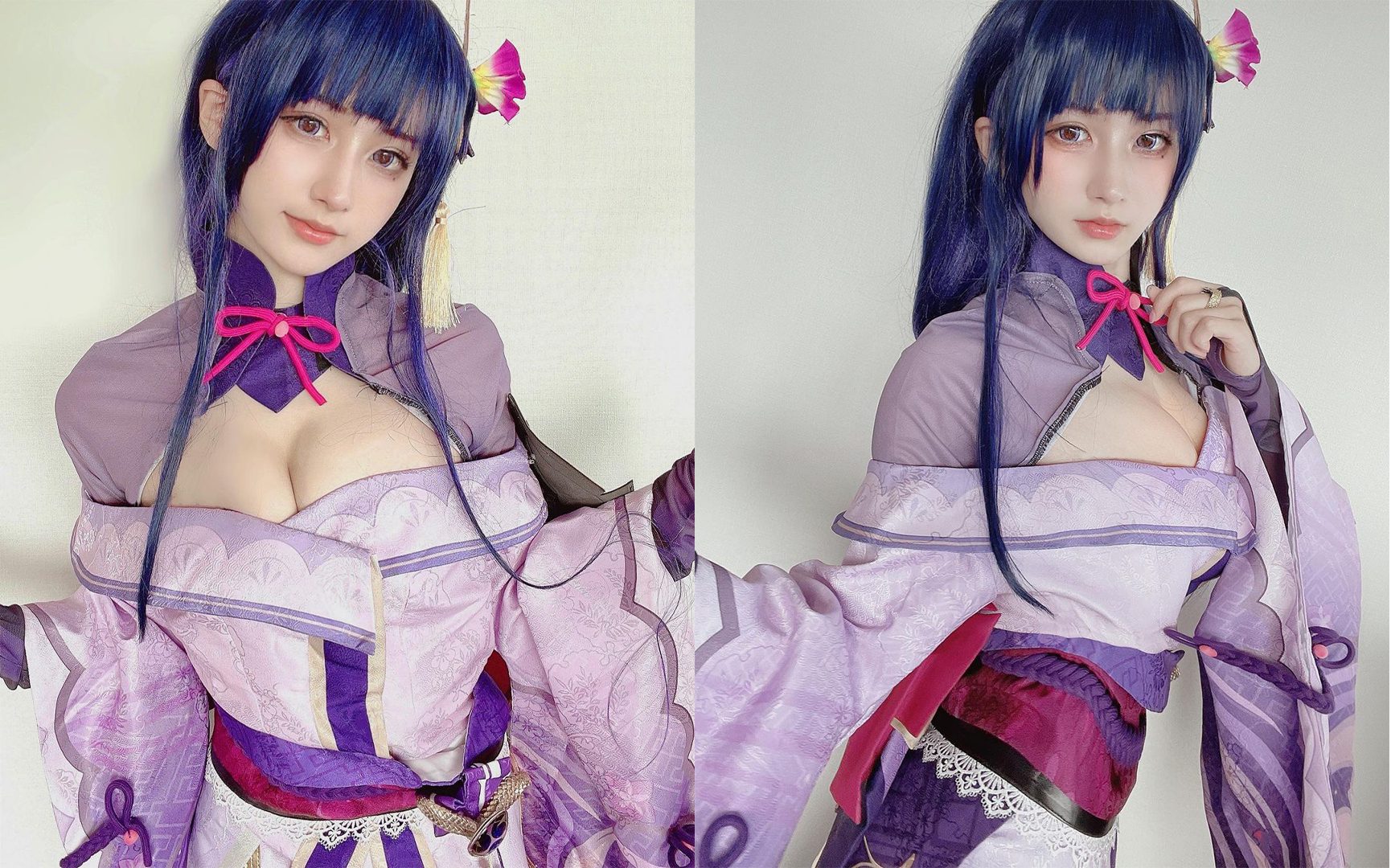 We got another cute cosplayer on this list, Simona. And when I say she nailed the Raiden Shogun, I mean it. Just one look at her and you already know who she is cosplaying as. She got everything right and looks super super cute in her cosplay. 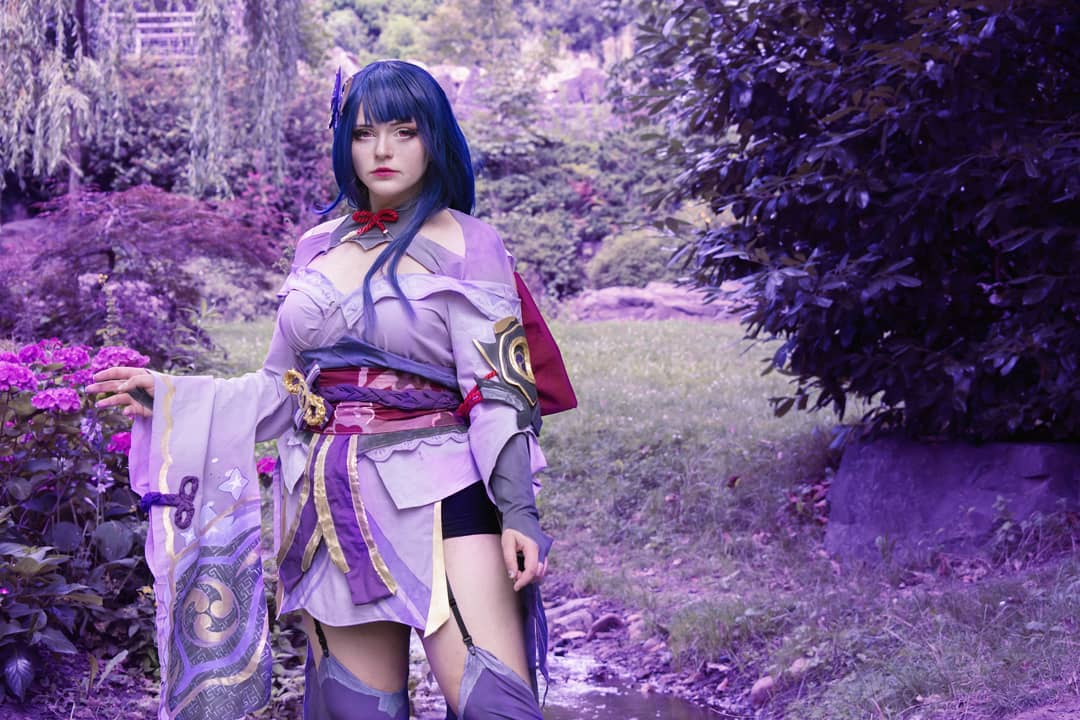 Do I even need to say it? Well, I will say it anyway, GORGEOUS! Anastasia sure did give us “Anaesthesia” with her Raiden Shogun, you get it ha, you get it? Forget that awful dad joke and just look at her. She pulled it off perfectly. This is the perfection in Raiden Shogun cosplay that everybody should aim for. 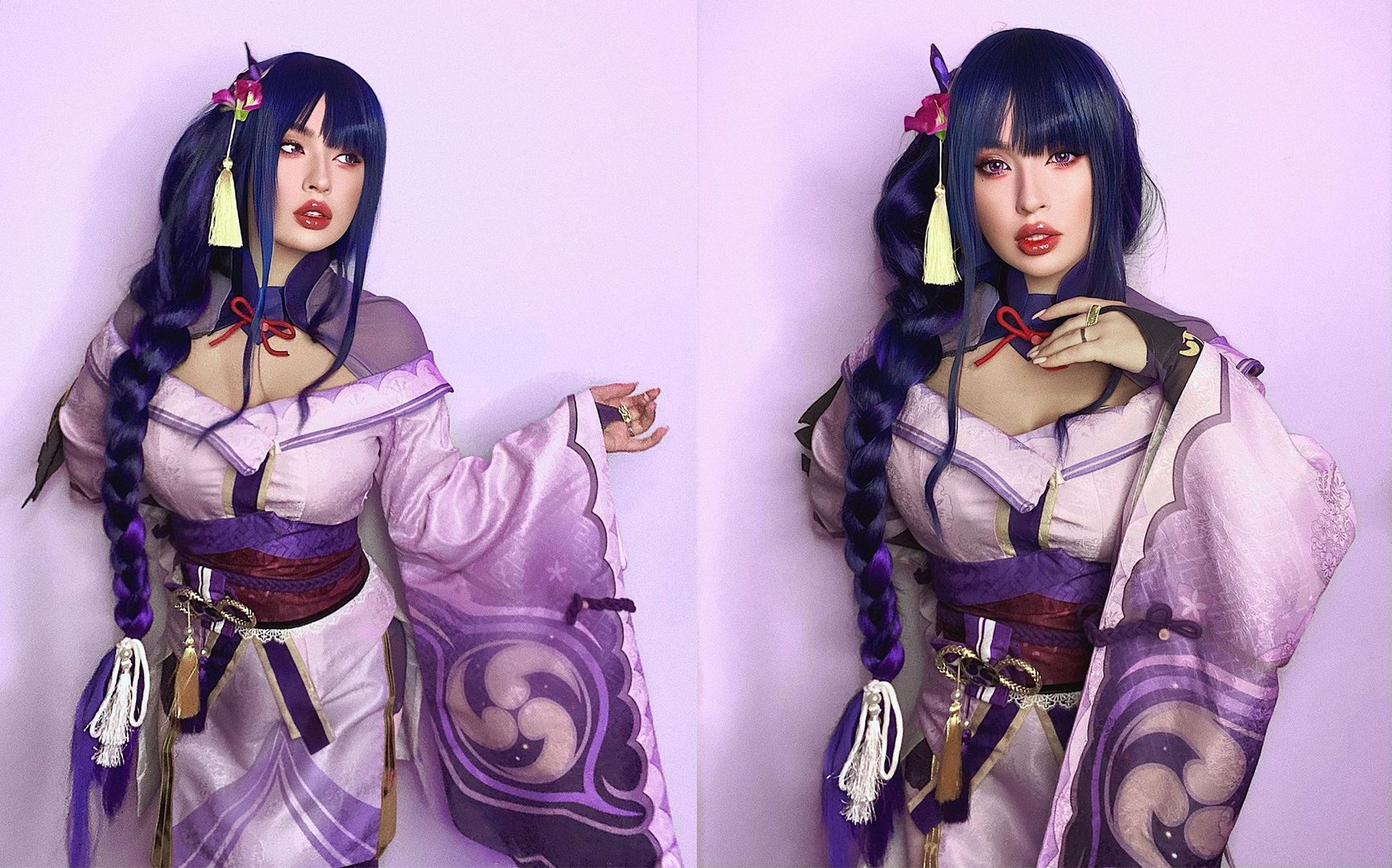