A Still From One Punch Man Chapter 178 (Credits: ONE)

Excited about One Punch Man Chapter 178? Well, we are here for you. But before revealing the release date, spoilers and reading guide of the most anticipated chapter, let us first take a look at what previously happened in the story.

We witness A-Class Hero, Air, in the hospital, with the new mechanical device on his throat. In chapter 171, Air was shot in the throat by Evil Nature Puddle and we see that he was brought to the hospital and had his throat immediately repaired by these guys who say they are specialists in Cybourg Medical Science and that the association requested them to come to help them.

They also mentioned that they can’t hold a candle to buffy them, which is interesting. In my opinion, at least I think that this is setting up one of the storylines going forward. What I am going to is not a spoiler, but I really do think it’s very likely that these guys are with the organization.

I think we have some evidence here,  the evidence that is defiantly going to anger some people but this guy’s bolo tie looks like the eye of the Organization’s Robots, or at least the most recent of them that w have seen, so, I think that is kind of pointing to it. If you guys think that’s a stretch, I understand, but regardless of the bolo tie, I do think that these guys were from the organization and that is where the storyline is headed.

Later in the chapter, we have that comedic sequence with Forte, Butterfly DX, and Chain’n’toad and I wonder where their storyline is headed and why ONE chooses to focus on them so much, in this portion of the series. At this point, I assume ONE has some big grand purpose laid out for them and I am just really curious to see what it ultimately is even though I know it probably gonna take ten years for it to happen.

Then we are coming back to the main storyline here with Saitama, finally facing down Tatsumaki, grabbing her by the wrist and not letting go. We saw this happen in the previous chapter after Tatsumaki had defeated the joker guy from Tsukuyomi and it also contains Psykos. Tatsumaki also had like one of her episodes and almost straight pseudo-killed the Fabuki Group until Satama stopped her, and Saitama’s whole motivation is because of Tatsumaki anyway.

Technically she is responsible for destroying his apartment, so he has like major beef with her over that and also you know trying to defuse the situation that is currently going on as well but that’s just secondary to him. Then Tatsumaki like psychically blasts Saitama, putting a huge crater in the wall but this of course does nothing to him. Tatsumaki gets shocked by this, is kind of like the first time I guess that she is experiencing the true power of Saitama.

She gives him another task, but this time it’s so powerful that the crater winds up spanning miles and she keeps going at Saitama using what Fubuki says is her full power and it’s kind of just as he says making his muscles switch.

Then Saitama yells to Fubuki saying I will do something about Miss Stubborn, so you take everyone here and evacuate. This triggers Tatsumaki, she is like, Oh! you are awfully familiar with her sister, aren’t him? I like the sequence because this is totally how Tatsumaki would react to somebody being cordial with Fubuki because obviously, Tatsumaki is very possessive of Fubuki and jealous as well.

Saitama pretty much just says that he is nothing to Fubuki except an acquaintance, it is like crushing her and putting Fubuki in the acquaintance zone, and Tatsumaki was saying why would he get this desperate over just an acquaintance. In my opinion, I think that this is setting up the inevitable relationship between Fubuki and Saitama, and I know it’s probably going to annoy some of you out there but I really do think that’s inevitably what is going to happen before the story’s over.

It’s already kind of been set up when they first met and I think moments like these are just more seeds being planted for that. I guess this is the only kind of romance that this series is really gonna get like the subtle background kind.

Then Tatsumaki is like whatever, that’s the case that she will test him to see if he deserves to be hanging over Fubuki like that, and she ramps up her psychic power and it causes shock waves throughout the Hero Association, to that even the rich people that just moved in can feel it. Obviously, it hanging them and they are blaming Metal Knight, but she is using so much power that the basement is even twisting around them. 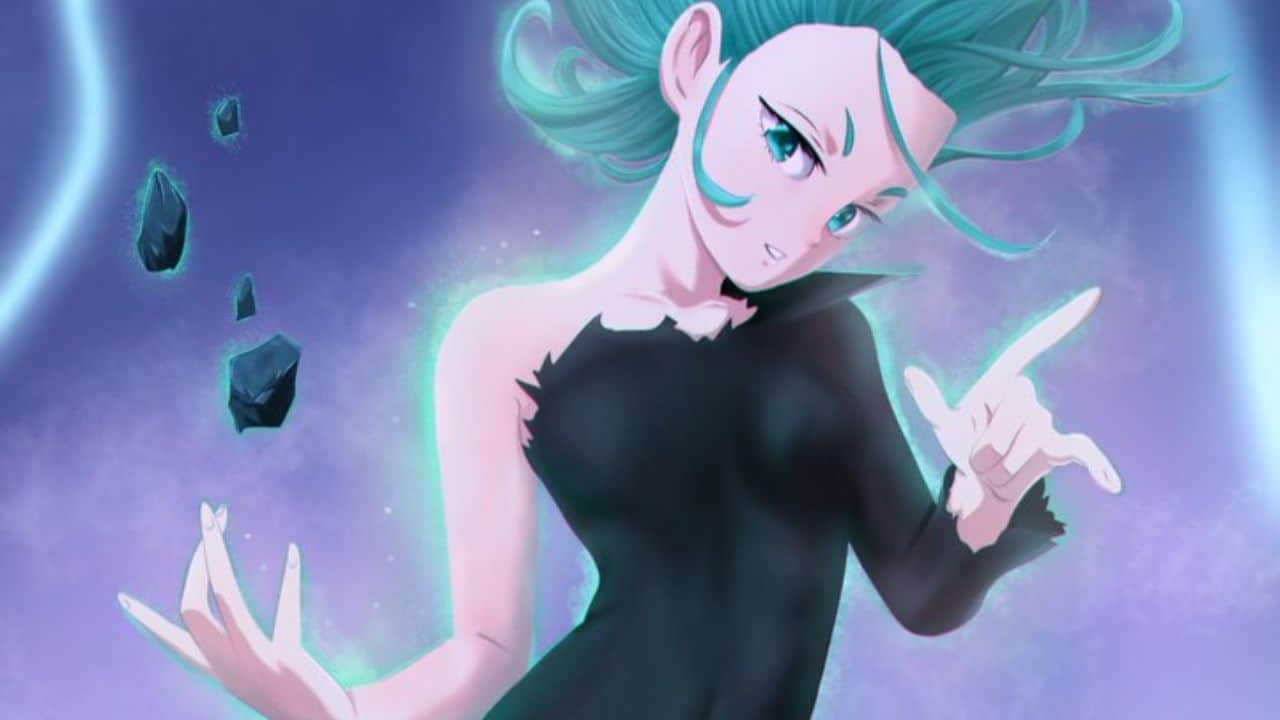 One Punch Man (Credits: ONE)

Until Saitama is finally like okay, you know if you are gonna do this, then we gotta do it outside and he grabs her and shoots out of the Hero Association like the Dragon Ball Z style, taking them to another location to fight, which is also very Dragon Ball Z style itself.

The chapter pretty much ends with Fubuki saying Saitama and Big Sis, it’s begun which you know their fight has begun. Like Saitama versus one of the strongest characters in the series. We also have another comedic sequence after this, with Tongue Stretcher, a character that we haven’t seen since his “battle with the King”, I hope that ONE doesn’t kill him off.

As of now, no spoilers have been leaked for One Punch Man Chapter 179 but it seems like, we are going to get Saitama versus Tatsumaki in the next chapter, which is going to be insane because I really don’t think ONE and Murata are gonna hold back on this one, just like they didn’t hold back with Saitama vs Boros. So, even if you have already read the webcomic.

I would still expect a much grander spectacle than what we already got between the two of them but as for what is exactly going to happen between them well, Tatsumaki realistically can’t really do anything to Saitama substantial, I mean maybe at her 110 percent, she could do something that could kind of impress Saitama, you know the way that Boros kind of impressed him maybe. But don’t expect her to push him anywhere remotely close to that cosmic for Boros.

One Punch Man (Credits: ONE)

In my opinion, I don’t think that Saitama is as strong as he was fighting Cosmic Garouin space because, if he was then I think the sequence that happens in this chapter with the test of strength would have played differently, right? I mean my reasoning at least is that when the past, Saitama merged with the future Saitama, his “power level” got reset, kind of like his memories did, and I think that would be a good way to up the stakes going forward in the series, right?

If he is so powerful that he just sneezed Jupiter away, then even the notion of somebody on the level of Boros means absolutely nothing at this point, which before it was at least a novelty. But yeah, hey maybe she will throw Saitama into space, I don’t know why but for some reason I feel like she is going to do that.

The upcoming chapter of One Punch Man will be available to read for the fans, without any delay. One Punch Man Chapter 179 is scheduled to be released on February 1st, 2023, at midnight. The various times at which the next will be released in different regions are as follows, make sure to mark your calendar so you can read this upcoming amazing chapter where we are gonna witness Saitama vs Tatsumaki.

How To Read One Punch Man Chapter 179

ALSO READ: 25 Heartbreaking Manga That Will Make You Cry