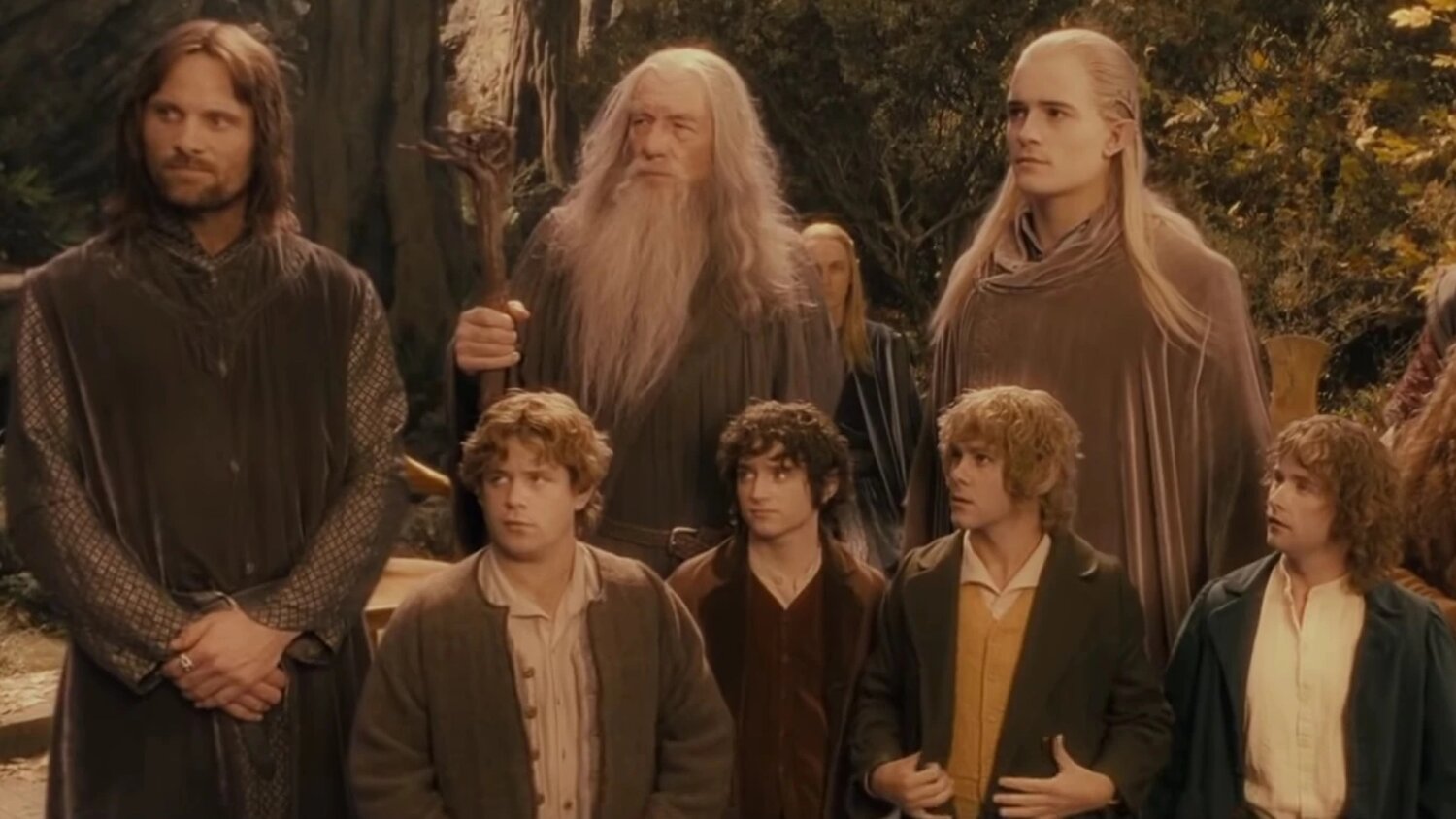 The Lord of the Rings

The Lord of the Rings fandom is one of the biggest fandoms in the world. This is because of the immense popularity of Tolkein as a writer and the books, on the whole. The universe created within them is detailed and believable. We might say that there isn’t any work of fiction out there that is quite like LOTR. While this applies to the books, what about the movies that have come out over the years? Has Peter Jackson managed to woo fans of The Lord of the Rings?

It goes without saying that the movies received a stellar welcome when they initially came out. The fans were eager to see their favorite work of fantasy translated into the big screen. That being said, it does not necessarily mean that the films were all up to par. People have quite a few things to say about the LOTR movies. We are here to bring these opinions to you because we consider it our responsibility. Listed below are all the LOTR movies ranked from the best to the worst. Read on and see if you feel the same way too! 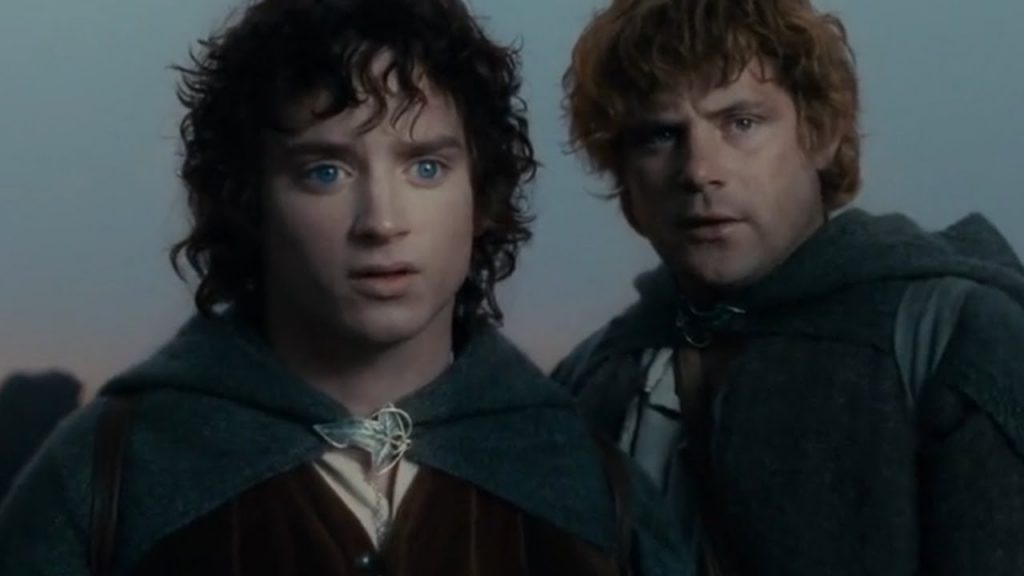 This is where the adventure technically begins for Frodo; hence, we will start the list off. The plot of The Lord of the Rings: The Fellowship of the Ring starts when a hobbit named Frodo realizes that he is now in possession of the One Ring, which is the property of the Dark Lord Sauron. He is given the task of destroying it and saving all of humanity. With this film, he begins this journey with his other eight companions belonging to society’s different strata. They make their way to Mount Doom to drop the ring in the eternal fire – the only way in which it can truly be destroyed.

2. The Lord of the Rings: Return of the King 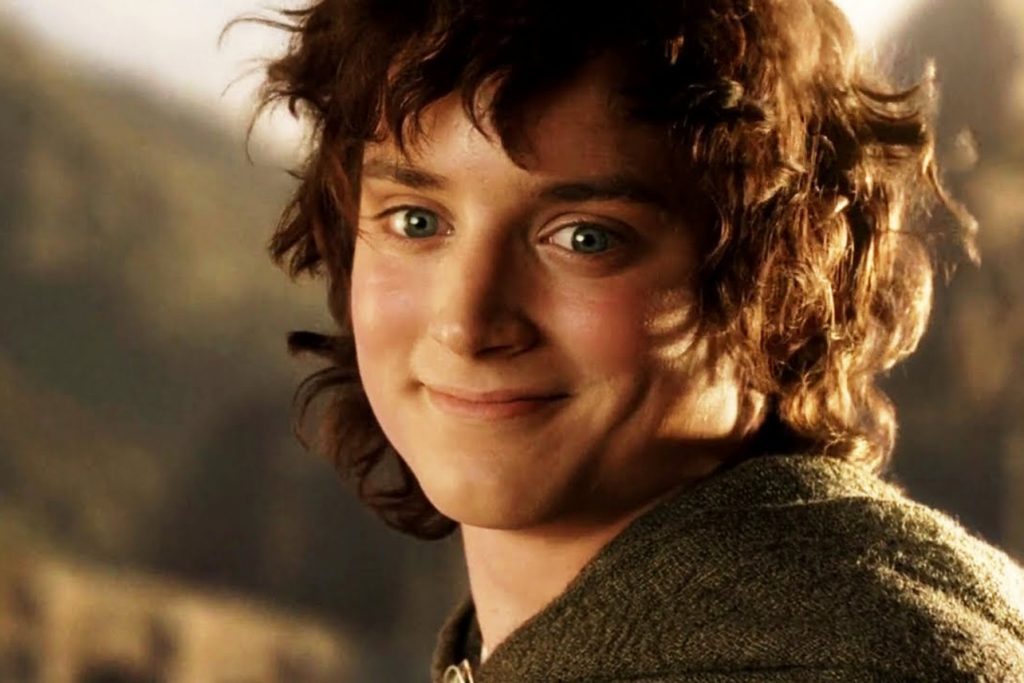 This is the final movie in the LOTR trilogy and possibly the best film out of the three. Now, you might ask us why we’ve ranked it second. This is a legitimate question. The Fellowship of the Ring ranks first because of all the important plot points it has set perfectly. Hence, by default, The Return of the King ranks next.

The movie’s plot follows the fellowship after they split up to get their quest to become a success. Most of the members are out in preparation for the final battle. Frodo and Sam make their way to Mount Doom to do what they’ve been destined to do: destroy the One Ring. To do this, they seek the help of Gollum but little do they know that he has no intention to do this. This movie is intense, emotional, and everything you want a The Lord of the Rings movie to be.

3. The Lord of the Rings: The Two Towers 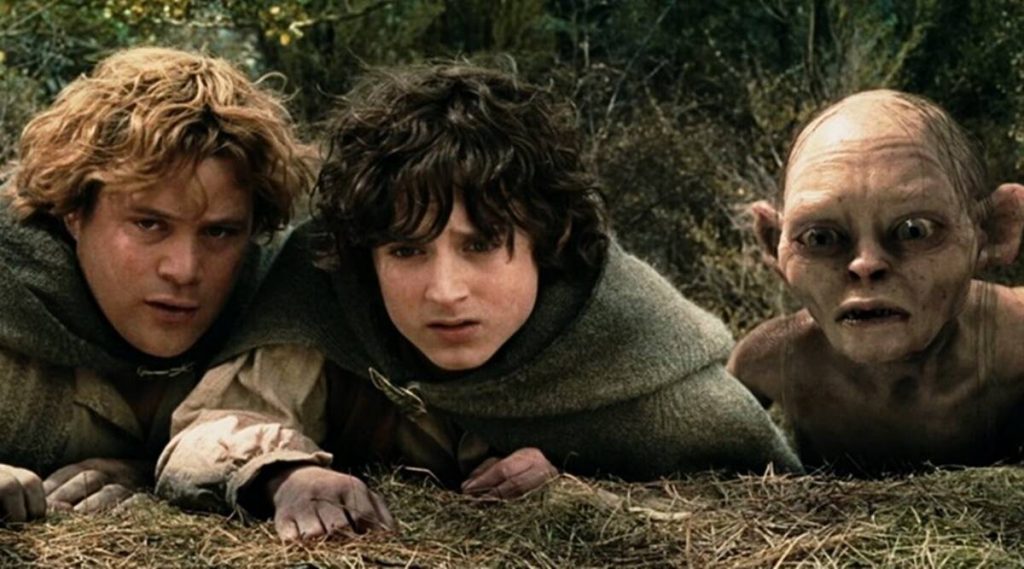 This is the second film in the series and acts as a glue securing the other two together. The movie is not as well made as the other two when you pitch them against each other. That being said, The Lord of the Rings: The Two Towers fares well as a stand-alone film.

The film sees the duo Frodo and Sam finally make it to Mordor. With Gollum helping them, they are all set to being the next phase of their quest. With regards to the preparation for the big battle, the group sees several new allies join them. They have a new mission at hand: to defend Isengard as the dark wizard Saruman decides to attack them and their friends.

4. The Hobbit: The Desolation of Smaug 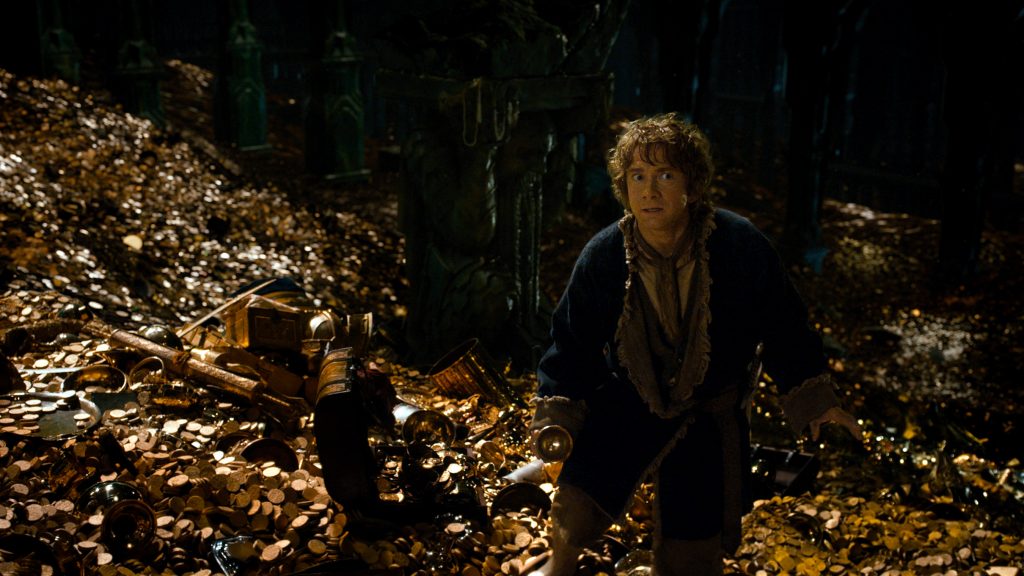 We have now left the LOTR trilogy world and have ventured into the prequel: The Hobbit. Almost a decade after the first three films, this addition to the franchise was welcome with open hands. Featuring Martin Freeman as Bilbo Baggins, the films really did try to do justice to the books, and that’s why they are placed at this point in the books.

The Hobbit: The Desolation of Smaug is the second film in the trilogy. The movie’s plot follows Bilbo Baggins as he and the group of dwarves he is journeying with make their way to Laketown. They reach the Lonely Mountain, where they will have to fight and win against the mighty and terrifying dragon, Smaug. The movie is engaging and can easily be termed the best of the three Hobbit films that have come out over the years.

5. The Hobbit: An Unexpected Journey 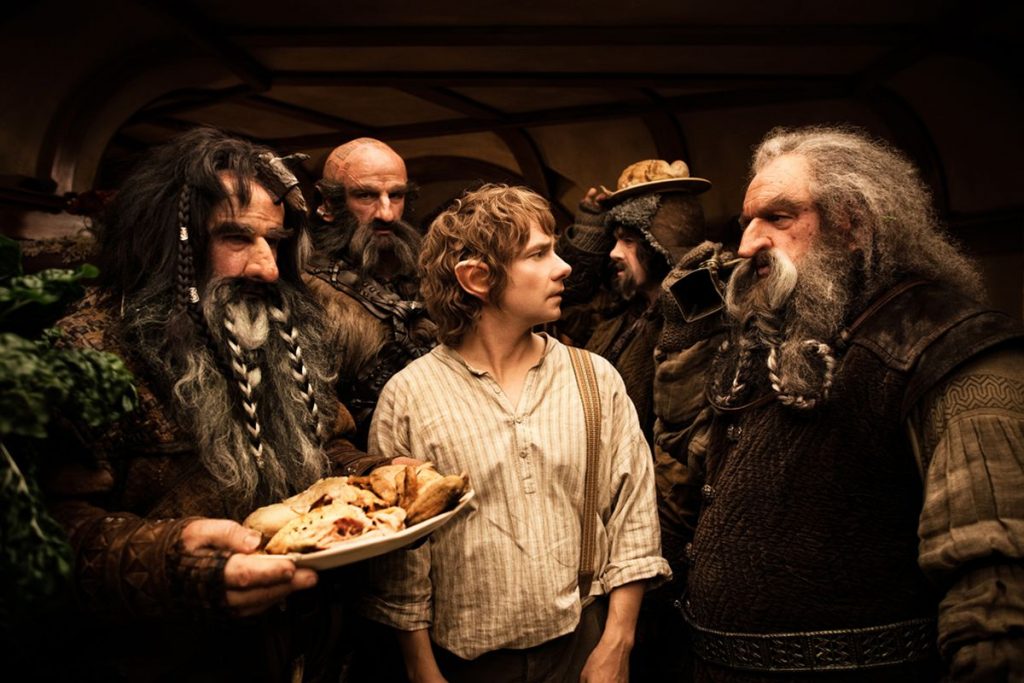 Bilbo Baggins and the Dwarves

This is the first film on the list and hence the most special. Technically, this is where The Lord of the Rings saga begins to look at the storyline. That being said, it is also one of the least well-made films on the list. Again, if we are to pitch the movies against each other, this would be the conclusion we would arrive at. However, this is a fun film to watch if you will be watching it as a stand-alone. We get to see Martin Freeman in action as Bilbo for the first time, starting the entire series. This casting is probably the best thing that could have happened to the film, apart from Ian McKellen being featured as Gandalf.

The storyline starts as Bilbo Baggins, a hobbit, is persuaded by Gandalf into going on an adventure. The adventure includes joining a group of dwarves on their quest to reclaim Erebor and their rightful riches, stolen by the dragon Smaug. This is the part of the story that lays the foundation for the other films. Because of this, the movie is one that cannot be missed. That being said, we still are ranking them, and The Hobbit: An Unexpected Journey ranks second to last.

6. The Hobbit: The Battle of the Five Armies 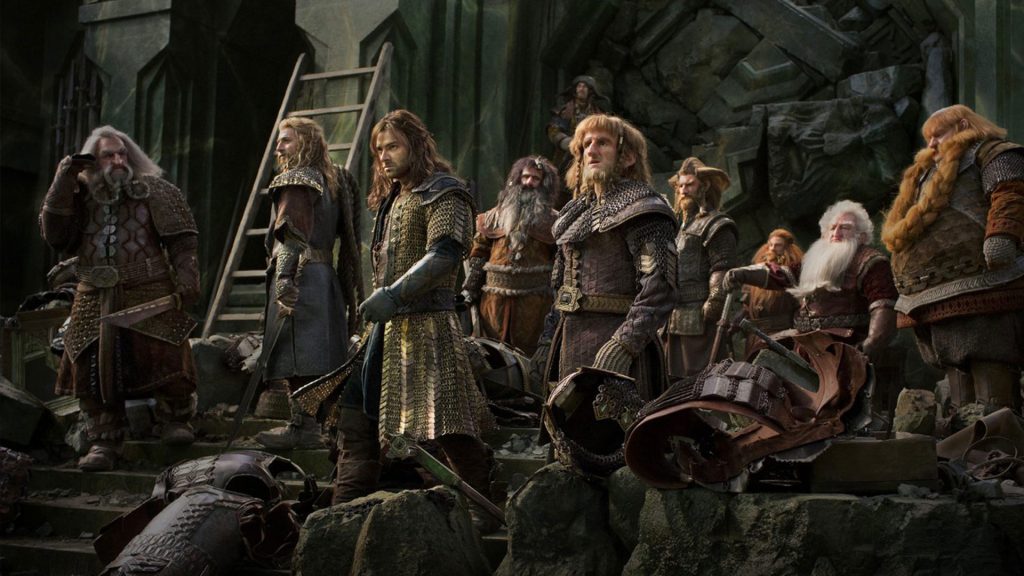 This is the last film on the list and, unfortunately, the worst. As much as it hurts us to say this, it has to be done. There are several reasons behind this statement of ours. One of the major ones is the rushed manner of filmmaking we see with The Hobbit: The Battle of the Five Armies. The original scene involving the battle is one of the best scenes of a movie out there. The film is also intense, emotional, and heartbreaking since we bid farewell to many of our favorite characters. We also potentially see the last of the franchise, making it a milestone. However, comparing it to the other movies – the film falls short by a great extent.

Bilbo is set for the final fight in his journey. The Hobbit, the dwarves, and all their allies should now fight against almost all of their enemies coming together to defeat them. They should win against these enemies and somehow protect the Lonely Mountain from destruction. This film should definitely be watched if you are trying to become a part of the fandom despite its ranking. After all, it still is a big part of the franchise, and maybe, this makes it deserving of a fighting chance!

Read More: The Kominsky Method Season 3: What to Expect from the 3rd Season of the Netflix TV Show?