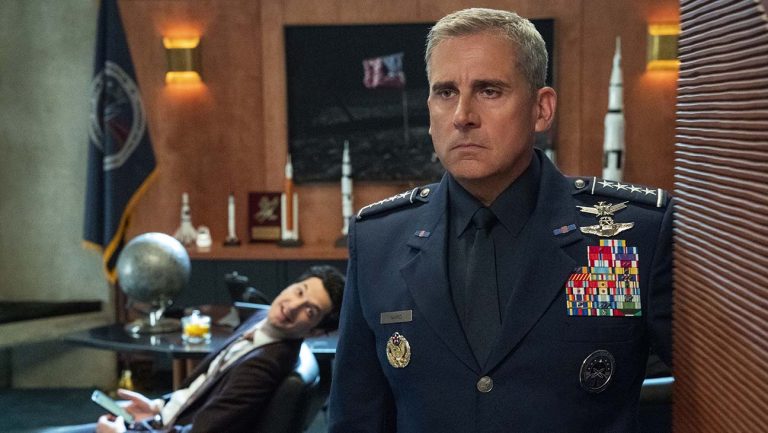 Our favorite Steve Carell is back! This time with a parody involving the current government in American comedy television. Brief know-how of Steven Carelle’s diverse profile would tell you he’s a number of successful credits in his name. The Office is the most famous, probably. Since the Space Force is new, the first thing that we are going to do is, introduce the cast. Most of The Office and Parks and Rec fans seem to love this one. And most of them tuned in to this one. It’s all about being loyal to your favorite set of actors and directors and writers. That’s how the entertainment industry works, and the cast of Space Force is particularly large. Since the show is based on the Force in the space, we decided to name each one and what they play. It is very important that you do not get confused and lost between innumerable characters that you see on-screen. For one, we think so many characters and members have ripped the show of what it should have been or would have become. The dangerous interplay with a barrage of cast members has plagued the show and robbed it of its essence.

Steve Carell plays Mark R. Naird who is Space Force’s first Chief of Space Operations, Diana Silvers as Erin Naird who is his wife, Dr. Adrian Mallory is Space Force chief scientist, Ben Schwartz as F. Tony Scarapiducci who is Space Force, social media director. Lisa Kudrow as Maggie Naird is appreciated by critics if not Carell’s. John Malkovich as Dr. Adrian Mallory Space Force chief scientist isn’t particularly impressive. We have discussed his role down below. Jimmy O. Yang as Dr. Chan Kaifang and Tawny Newsome as Captain Angela Ali. Noah Emmerich plays General Kick Grabaston, Chief of Staff of the United States Air Force. Alex Sparrow plays Captain Yuri “Bobby” Telatovich, a Russian Air Force liaison with Space Force, and why wouldn’t there be Russia in the plot. The other recurring castmates include one very fantastic role by Don Lake as Brad Gregory, a Space Force 1-star brigadier general, who serves as Naird’s personal assistant.
Fred Willard plays Fred Naird, Mark’s father. Jessica St. Clair plays Kelly King, structural engineer and civil contractor, Roy Wood Jr. as Colonel Bert Mellows, Army liaison to the Space Force, Jane Lynch plays Chief of Naval Operations, Chris Gethard plays Eddie Broser, Diedrich Bader as General Rongley, Chief of Staff of the United States Army, Dan Bakkedahl as John Blandsmith, Secretary of Defense, Patrick Warburton plays General Dabney Stramm, Commandant of the Marine Corps, Larry Joe Campbell plays Admiral Biffoont, Commandant of the Coast Guard. The minor cast roles are Owen Daniels as Obie Hanrahan, Spencer House as Duncan Tabner, Hector Duran as Julio Díaz-José, Thomas Ohrstrom as Dr. Vandeveld, Carolyn Wilson as Louise Papaleo, Jamison Webb as Major Lee Baxter, Nancy Lantis as Dr. Wolf, Vivis Colombetti as Hilde, Amanda Lund as Anna, Marc Sully Saint-Fleur as Jean Baptiste Bosou, Brandon Molale as Clarke Luffinch and Scott Michael Morgan as Emmett Bunyan.
There are a bunch of parody characters in Space Force too. Ginger Gonzaga plays Anabela Ysidro-Campos, also known as AYC. She is a parody of Alexandria Ocasio-Cortez, Concetta Tomei plays Representative Pitosi, a parody of Speaker of the House Nancy Pelosi. Alan Blumenfield plays Schugler, a parody of Senate Minority Leader Chuck Schumer.
The show has been created by Greg Daniels and Steve Carell. Just three days ago, the series premiered on the digital streaming giant Netflix. Fans were more excited to see Carell and Kudrow in the show for each of them has been associated with the greatest sitcoms of all eras.
The premise of the show is pretty spoofy. Steve Carell does workplace comedies like no other, The Office being an example in this direction. Space Force too is a comedy series that tells the tale of the group of people who the government has assigned the responsibility of establishing the sixth branch of the United States Armed Forces, the United States Space Force. The team is deeply invested in getting “boots on the moon” per the orders of the President.
The series consists of a total of ten episodes, all of which premiered on the same day, at the same time on Netflix. Greg Daniels, for those of you who do not know, is the creator of The Office, so what better than seeing Steve and Greg team up for another work-place related comedy, right?
One by one, we are going to go over the names of the episodes. They are: “The Launch”, “Save Epsilon 6!”, “Mark And Mallory Go To Washington”, “Lunar Habitat”, “Space Flag”, “The Spy”, “Edison Jaymes”, “Conjugal Visit”, “It’s Good To Be Back On The Moon” and “Proportionate Response.”
Would you say the show is funny, sure! But would you compare it to the previous tasks that Greg Daniels and Steve Carell have pulled off? Nope. The show is silently funny and in a good way. Even though it is intelligently crafted and written and Steve reminds us way too much of Michael Scott, there are a lot of things that are amiss. For casting and topicality, you will have to give the show full points. But the characters these brilliant castmates play are difficult to comprehend. In that, they have been so badly written, so just wish you weren’t staring at the screen watching your favorite actors do that. The construction of the overall premise of this satire is baffling and unappealing. Even though there are quick laughs and there’s intelligent writing. But again, Space Force misses the mark!

The show begins by General Mark Naird (Steve Carell) who commands the newly created America’s Space Force, which is a brainchild of someone like Trump. We are not shown who this person is and he never appears on the screen. But there is an actual person who appears to be giving orders, making the top-notch of his country comply. He is always on Twitter, he tweets his desire that he wants “boobs on the moon” by 2024. The Space Force thinks he means he wants “boots on the moon” by 2024. And hence, begins the “boobs/boots on the moon” story involving Steve and mates.

The only person looking to back Steve (Naird) up is scientist Adrian Mallory (John Malkovich) who appears he should have retired from the job years ago. The man is dressed in tweed. Together Adrian and Naird have very little chemistry, though the two are more like an off-and-off couple. The thing is, we do not understand their dynamics, who leads whom, who is whose boss, all of this is unknown. Sometimes you feel Mallory leads the Space Force, the next day he won’t even bring his ID pass along.

Lisa Kudrow, as the name suggests plays Naird’s wife, Maggie. She goes missing suddenly after sent to a prison sentence. Lisa’s absence in the show is another detriment. Why she’s missing or sent to prison will always be mysterious. She does appear in the end to let her husband pursue some other woman. Excited to know this woman? Even we barely know her. Niard as a temperamental teenage daughter (Diana Silvers). We do not understand her brief characterization, nor her presence in the show. Some of those who have followed Greg and Steve through The Office and Parks and Rec may say that the show should be given time, after all, both their previous projects struggled with the ratings in the beginning. But we doubt whether those shows were this bad, we don’t think so! If you ask me, The Office pilot remains hilarious to this day and one of my most-watched episodes from the show.

It is difficult to fathom that Space Force was created by Greg and Steve who not only did The Office but also another successful stint called Parks and Rec. I mean, what happened here, you guys? As soon as the show aired on May 29, it was the top-steamed show, but quickly the ratings dropped. And we don’t know whether it will b getting another season, for now.

All in all, Space Force looks like a show that can be easily skipped and missed. We wouldn’t mind. It has disaster ratings, 38% on Rotten Tomatoes, 6.9 out of 10 with 7,000 reviews in on IMDb. 4.7 out of 10 on Metacritic. As for Netflix’s original offerings, Space Force is currently wedged-in between the 156th and 167th highest-rated original.

The thing is, it is one of the most-streamed Netflix shows and despite reading the reviews people are making out time to watch it. That should tell you that there is a pretty good chance that Space Force gets another season because that’s all that Netflix does care about. As long as the views come in, money flows. And that’s the sad reality of Netflix. As a Steve Carell fan and a long-time loyalist, I for one will be happy if the show gets a second run.