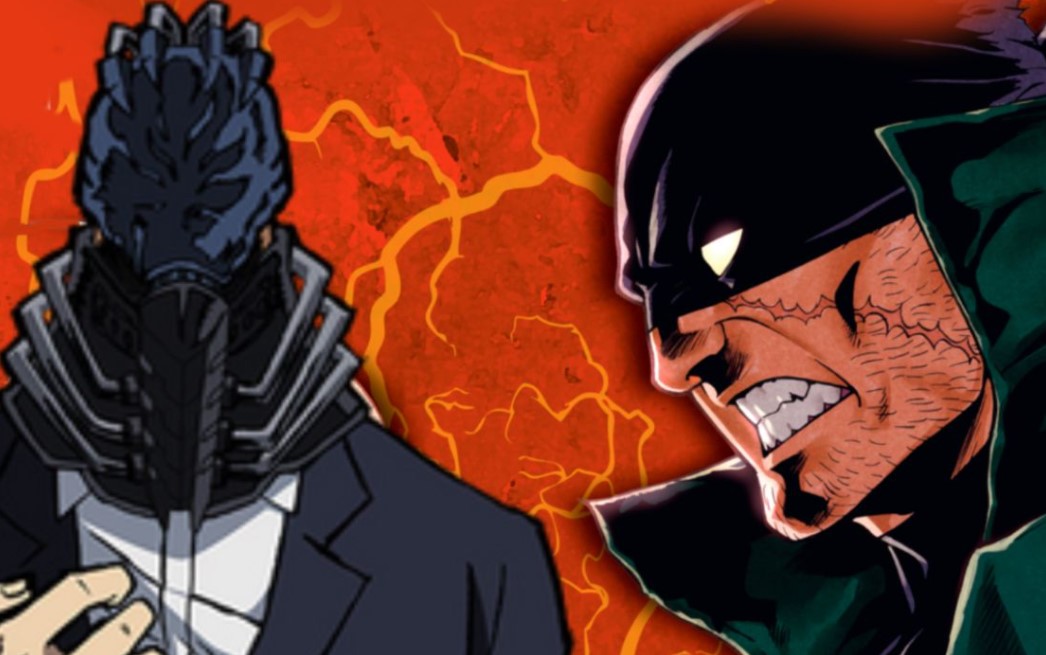 From the recent development of this manga, O’Clock destroys the CCTV by shooting them and so that he won’t be seen. Inside the CCTV room, the unknown guy is surprised. He thinks that their plan might fail and looks to his partner, Kurogiri for advice. He responds reminding him of their asset sent into the field. The guy wearing the hood gets ready to fight and the Rapper is excited while attacking with heavy punches.

The guy manages to dodge all of the attacks and then stretches his arm and sends the Rapper to the ground. Tiger Bunny jumps into the fray, ready to attack him with a big kick. He also sends Tiger Bunny flying right into the Rapper. When he is about to stretch his arm with an aim of grabbing them, O’Clock arrives. He uses his knife and cut his arm until it explodes. and he orders Tiger Bunny are the Raper to just watch. O’Clock realizes that the arm of the hooded guy can heal itself and the guy recognize him.

My Hero Academia Vigilantes Chapter 92 will be released on Friday, 25 December 2020. You will keep on getting new chapters of Vigilantes twice a month. Let’s see what the latest updates of this Manga have to offer for us below.

The hooded man started fighting with O’Clock, using his Quirks to extend his arm to try and throw punches. His attacks and skrikes cause chaos inside the building. Everything is destroyed with everyone running upside down. O’clock uses his quirk to dodge all the powerful attacks that are also destroying everything nearby. The fans and other unknown fighters are trying to run for their lives.

O’Clock notice that is is facing a tough opponent. Tigger Bunny asks him if he is okay and he orders her and The Rapper to stay low for now. He also told them that it is time for plan B. In his secret base, All For One is annoyed that they won’t be able to see the title fight since many of the cameras were destroyed. As well as the panicking spectators getting in the way. He thinks that maybe he should clear the arena by himself but Kurogiri doesn’t support his idea.

Kurogi reveals that at this time this is no more than an underground fight club riot. Any further escalation would draw the attention of the authorities. It might also catch the attention of All Might and show up inside the arena. They decide to let the situation settle on its own. The hooded man smiles saying that it is always him looking at O’Clock continuing with his speeches. He said his own personal bugbear and the constant thrown in his side.

O’Clock observes the hooded man studying his abilities, how he fights, and how he regenerates by healing himself. He discovered his body utilizes cellular propagation at lightning speed which allows him to not allow stretch and transforms his limbs, but also heal and alter their structure. He finds out about his martial arts vibe appears to be drilled into his muscle memory, and that said fighting style isn’t compatible with his Quirk, forcing his wind-up attacks to have a lag.

O’Clock also finds out his weakness in every move he tries to do and took it to his advantage to defeat the hodded man. O’Clock realizes that his own Quirk Overclock is perfect for exploiting an opponent’s delay reaction.  He thinks that he can either predict all of his attacks or feint to create an opening before cutting up his tendons and muscles. He then uses his Quirk to predict his attacks or create an opening to cut up his muscles, not creating anything lethal but doing enough damage to keep him in one place.

O’Clock continues to slice him apart while using the speed of his quirk to finish him quickly. He realizes that he can keep slicing him for ten to twelve seconds since his breathing is hapmpered. That will be creating an opening for Tiger Bunny to attack with the final blow. All of sudden Tiger Bunny rushes quickly heading toward the Underground Facility, making her way to the exit.

While the hooded man saw her and tries to stop her by grabbing her.  O’Clock and The Rapper started to attack him with powerful attacks that manage to get his attention to them. That helped Tigger Bunny to escape while he is busy clashing with those two. Earlier, O’Clock reveals his Plan B idea in case an unexpected threat showed up. Tiger Bunny asked if she has to get the cops, but he says they wouldn’t be able to take down any opponent he has trouble with.

Also asking the help from a powerful hero to deal with the villain would take too much time. They must try to use the ace card to outsmart the villain and protect everyone. Tiger Bunny busts her way out of the building. She appears outside high up in the sky coming to the land on the ground where the cops are looking at her with a surprising look. The backup police are hiding outside near the building holding their weapons in confusion.

One of the cops reveals that someone has guts broke out of the building. The other said that it looks like a kid in a school uniform. The third one asks why she is covering her face with the mask. Tiger Bunny asks if there is detective Tanuma around and she has the message for him from the old scruffy down there.  She that ” he says you call You know who, call number one we need All Might!!.”

Peaky Blinders Season 6: A Detailed Analysis About The Next Season!